HOA BINH – From the US to visit friends, Benjamin explores the model of farmstay, bathing in waterfalls, eating bun cha, and feeling the atmosphere of the countryside.

Benjamin, from Chicago, USA, came to Vietnam at the end of June to visit friends in Hoa Binh . His friend is Le Xuan Loc, born in 2000, a former American student, now managing a farmstay in the direction of traditional culture. Therefore, Benjamin decided that the trip would “not look at the city” but always go to his friend’s farmstay to learn about life in the countryside of Vietnam. Here, he was led by Loc to experience simple things and feel love for such a life. 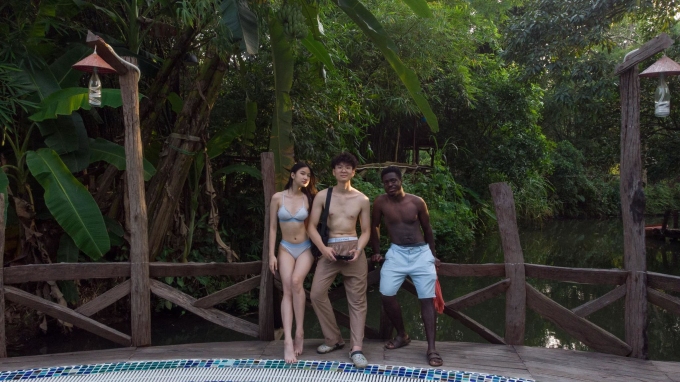 Every day, Benjamin experiences farming, digging potatoes, drying straw, watering plants, swimming in mineral water… He enjoys staying at Nala Garden Farmstay , resting in the ancient house of the North, admiring when he learns. Vietnamese people use laterite bricks and roofs to build houses. According to the criteria of wanting to discover the simplest things, Loc led Benjamin to discover the beautiful spots in Hoa Binh but not famous, which are Dong Chanh dam, Fairy waterfall, Doi Mu stream, 800-year-old Ma Lang banyan tree. …

When he first arrived, Benjamin was a bit tired due to the hot and humid weather in the northern summer, although Hoa Binh still had many green trees, cool ponds and streams. However, he kept an optimistic attitude, saying that because of such weather, the experience of wading streams, crossing waterfalls, bathing in mineral pools is “very good”.

“The weather here is hot and humid, so it is very memorable to mingle with friends in the cool water,” he commented. He likes the feeling of conquering nature. On the waterfall, the depth from the knee that goes near the foot of the waterfall is already 3m deep. Benjamin also praised the mineral water swimming pool at his friend’s farmstay. Because natural mineral water in the ground is self-regulating, the hotter the summer day, the cooler the water will be.

“On the hottest days, Benjamin and I soak all day in the pool,” Loc said.

The boy gave many compliments to Vietnamese fruits, especially interested in jackfruit. However, Benjamin’s favorite dish is bun cha. “I have tried it in the US, but eating in Vietnam is really different. The taste is unique, hard to describe, but no other dish in the world has the same,” he shared. Benjamin finds the flavor of grilled meat more explosive when served with fish sauce, while raw vegetables help balance things out.

Benjamin also loves the Vietnamese people. The anniversary is buying a bottle of filtered water at a new restaurant that opened one day. The owner asked for permission to take photos of Benjamin to advertise the restaurant. Loc agreed but turned around to see that his friend’s face was not happy because he was photographed without permission. “So the guy selling water gave you a can of gourd beef, your face was fresh and happy until two days later,” Loc laughed. Until now, when recalling this memory, Benjamin still praises the delicious beef broth, and every opportunity to drink it, he will remember the hospitality of the Vietnamese people. 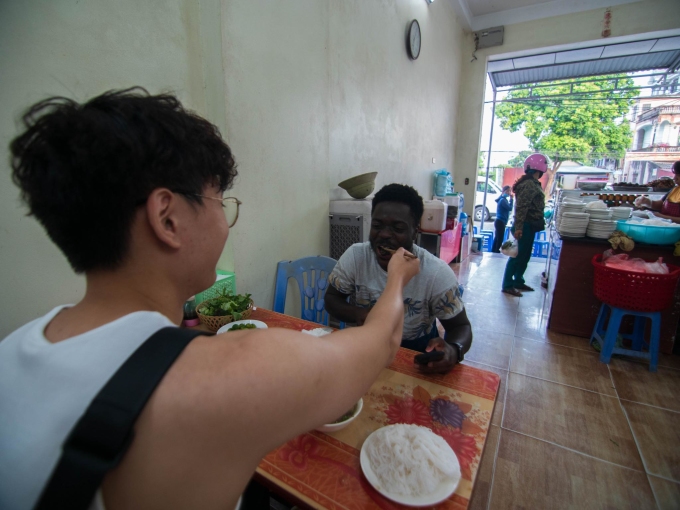 A couple of close friends feed each other with bun cha.

Benjamin loves life in Vietnam and wants to come back here if given the opportunity, to visit more Vietnamese villages, not just in Hoa Binh. “For me, travel is a rustic experience. I like to go to places few people go to, few people know. Go deep into villages and villages, sit and talk with locals, ask for some pictures with farmers. “. Crossing halfway around the world to Vietnam, Benjamin still smiles when he is bitten by a squeeze, or his leg bleeds from touching rocks while wading waterfalls…