A group of Quang Nam countryside workers and students of Dong A University came to the bridge, and inns, and repaired motorbikes for free for the people of Da Nang after the flood.

On October 16, dozens of car repairmen in the mountainous district of Nong Son (Quang Nam) quickly “catching disease” for dozens of motorbikes damaged by flooding near the Da Nang University of Education and Da Nang area. Son, Lien Chieu district. These are flooded areas from 1.5 to 2 m deep, and many motorbikes were damaged. They dry the spark plugs, wash the carburetor, change the oil in the engine compartment, and check the electrical system… Vehicles that have to change oil, spare parts, and repairmen only get the original price purchased from the company.

Dang Ngoc Tinh, 38 years old, residing in Nong Son district, said that on the morning of October 15, a group of workers sat drinking coffee when they read the flood news in Da Nang, causing many people to walk or even leave their cars on the street. . People have invited each other to “go down the mountain” to support the people.

The distance from home to Da Nang is about 70 km, so the group rented a truck to carry tools, while a sponsor took a car away. Right in the afternoon of October 15, the first workers were present in Da Nang, setting up a field car repair shop at the foot of the Hue overpass, Thanh Khe district. They contribute money to buy lubricants, and necessary components to immediately start work. 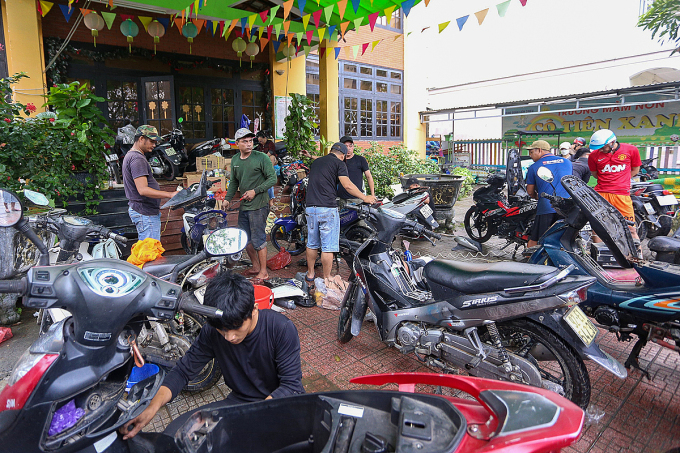 Many motorbikes of people and students… are repaired by volunteer teams for free. Photo: Ngoc Truong

When there are more than a dozen workers, the group expands the area to neighboring areas to help more people. A large number of people, knowing the news, brought motorbikes to them and waited in line for their turn, most of which were students and poor workers.

“Living in a place that used to be affected by storms and floods, we understand that after natural disasters many people need means to solve work and study, so we have provided free support for people. Quang Nam and Da Nang are a part of the world. gut,” said Nguyen Nho Hau, 35 years old.

Along from Quang Nam to Da Nang, a group of workers in Thang Binh district also repaired cars for free for people at the beginning of Yen The street, Cam Le district. In addition, many students of the SOS Team of Dong A University of Danang also help repair cars for students in the school.

The Dong A University delegation also organized three quick response teams to the hostels where students were staying to fix their cars on the spot. Funds for free car repair are raised from funds and support from teachers.