QUANG NINH – The coriander seed in Dong Trieu town produces 0.5-1 kg of fruit and is purchased for up to 5$/kg, providing a well-off life for 1,500 households.

The price of Custard apples here also fluctuates from 1-2$/kg. This year’s Custard apple crop, Dong Trieu town reached an output of more than 11,000 tons, the price is also the highest ever.

Owning 300 coriander trees, Mr. Bui Xuan Dieu, 48 years old, living in the new village of B, Binh Khe commune, said that the skin is thin, the taste is cool, not as sweet as Custard apple. In particular, the Dong Trieu custard apple tree gives “giant” fruit, almost as long as an adult’s hand, weighing in kilograms.

Mr. Dieu started growing custard apples 20 years ago, when most of the land in Dong Trieu was growing litchi – a poverty alleviation crop at that time. When the price is available, people move to convert crops. Up to now, the whole town of Dong Trieu has 908 hectares of Custard apple trees, the most among the crops. In, the area is about 100 ha and tends to increase.

“Na bo has only been popular for the past 5 years. Although the price is very high, the market trend is always changing, so we do not move massively but gradually. A few dozen trees a year”, Mr. Dieu said. . 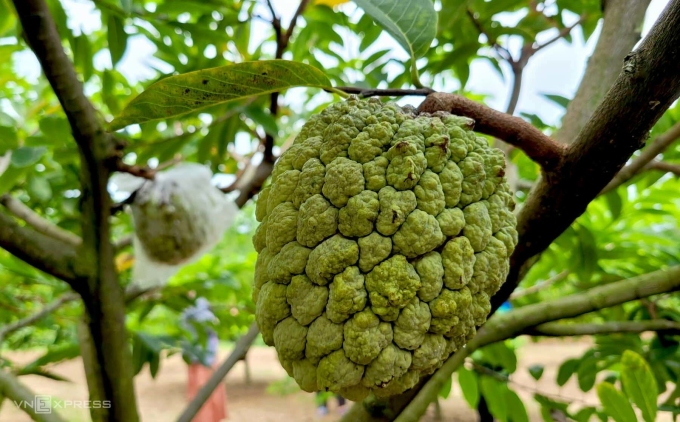 For each custard apple tree, people only leave about 20 fruits for development. Photo: Le Tan

There are 200 pink-eyed custard apple trees earning nearly 2 million dongs each, Hanh said, the custard apple must be planted in land that is not waterlogged, one meter deep without clay. In the process of plant growth, growers must prevent thrips, red spiders and invasive polyphagous fungi.

“Although we all use biological products, at least half a month before harvest, we stop spraying pesticides. By the beginning of September, if we have not harvested all of them, we must use plastic bags to cover each fruit to prevent fly invasion. harmful,” said Mr. Hanh. 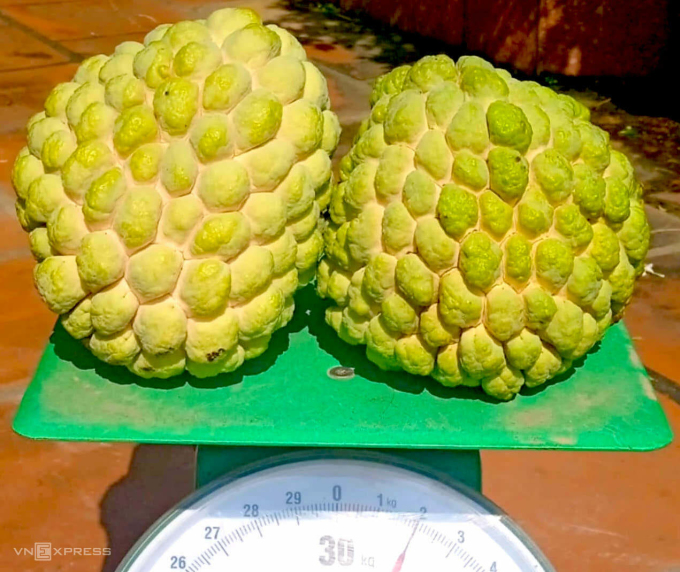 The custard apple tree will bear fruit for three years, but experienced farmers in Dong Trieu usually take care of the tree until the fourth and fifth year to start harvesting. Mr. Khang, a household grower in Binh Khe commune often “checks the health” of each tree to see how much fruit it can withstand. “There are trees, we only have 20 fruits, but the total weight is more than 10 kg. All the fruits are big and equally beautiful,” he said.

For good growth, Custard apple is planted in straight rows, each row is spaced at least 2 m apart. Fruits are selected while still on the tree, stamped with traceability. Traders often come to the garden to buy the whole thing. 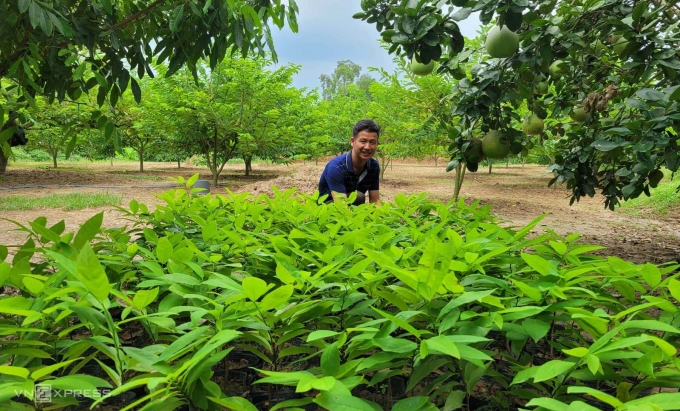 Many gardeners started to develop seedlings to sell for 30,000 VND/plant. Photo: Le Tan

The town is planning to increase the area planted to acacia, according to VietGAP standards. The application of science and technology is also promoted to achieve the highest productivity and quality. Reputable growers are encouraged to grow seedlings and expand the area of ​​custard apple trees.