Having made a living in many jobs, sympathizing with poor workers, Mr. Hoa hung a sign in front of the shop: “Porridge for the disabled, the elderly, lottery ticket sellers, 0,2$ or no money is fine.”.

For nearly a year now, Quang Khai’s congee shop, owned by Mr. and Mrs. Tran Van Hoa, 47, and Ms. Tran Thi Dung, 36, has been the go-to place for many poor workers in Saigon.

The shop is located at 317, Trung My Tay 13 Street, District 12, Ho Chi Minh City the space is only about 60m2 with 7 stone tables but arranged very neatly and cleanly. 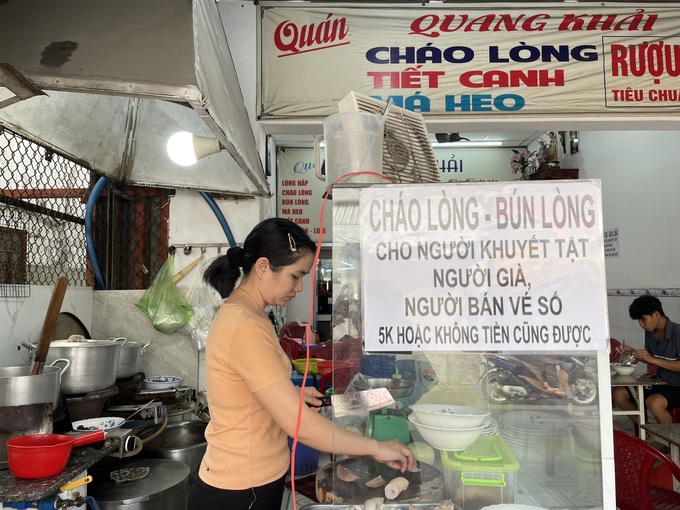 Before being the owner of the porridge shop, Mr. Hoa and his wife started their business with empty hands. They went through many jobs such as selling fruit, driving rental trucks… When they had some capital, they opened a restaurant specializing in seafood but failed.

As a native of Ha Nam, Mr. Hoa revived, tried his hand at the porridge shop, and cooked according to the taste of his homeland. Gradually, he taught himself how to mix the recipes of the North and the South, so the restaurant was quite popular.

The couple probably would not have thought of helping the poor with a bowl of porridge at a cheap price of only 0,2$, even for free if they had never experienced the event.

Before the Covid-19 epidemic last year, when he went to the market to buy raw materials, Mr. Hoa had an accident that seemed difficult to survive. At that time, the shop had to close, and the couple returned to his hometown, Ha Nam, to live for nearly a year.

Hi, Hoa made a full recovery. He and his wife think that because God loves them, they have to do good deeds to repay life. “So after Tet, the couple decided to hang this sign to help the poor have delicious meals without having to worry,” Dung shared.

Not wanting his wife to work hard by getting up early every day, Mr. Hoa took the job of going to the market from 3 am, then returned to prepare food and then built a pot to cook porridge. 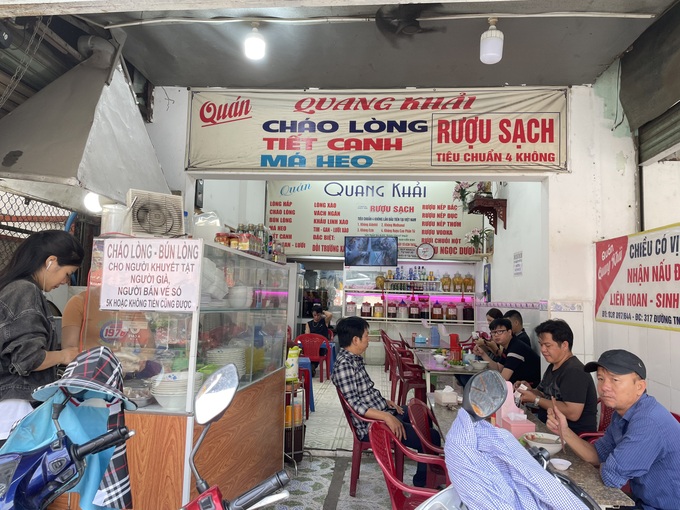 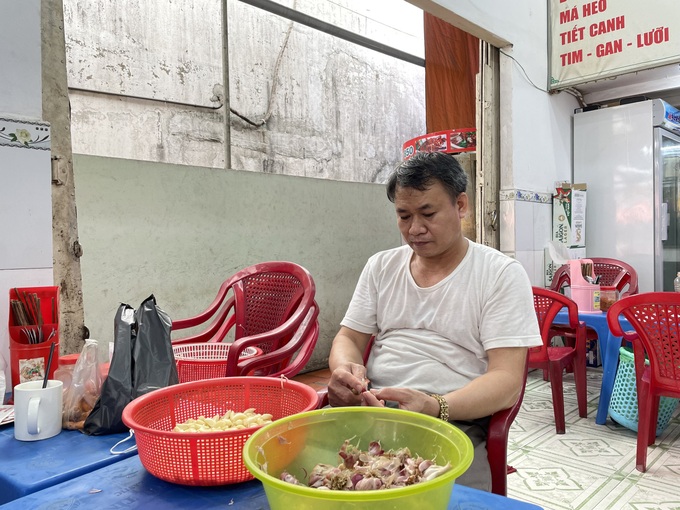 Mr. Hoa does most of the steps from preliminarily processing to standing in the kitchen (Photo: Thanh Huyen).

Every day, the restaurant serves hundreds of diners with two dishes of congee and vermicelli. In the morning, the shop sells from 6 to 11 pm, with porridge heart, blood soup, pork cheeks. In the afternoon, from 16:00 to 21:00, Mr. Hoa sells more roasted ducks to take away. The cooking is done by Mr. Hoa, while Ms. Dung is the one who sells directly.

Given that the internal organs of animals, if not carefully processed, will have a fishy smell and may carry many pathogens, so Mr. Hoa puts his heart into the preliminary processing.

“Selling to others should also be considered as selling to family members. I want customers to visit the restaurant not only because it’s cheap and delicious but also because it’s clean and nutritious,” Mr. Hoa said.

Normally, Mr. Hoa sells a full bowl of porridge for 25,000 VND: including pig’s blood, young intestines, pho, … served with fish sauce with a few slices of red onion, chili, and a plate of herbs.

Mr. Thai Minh Thanh (56 years old, district 12) said: “I work as a bricklayer and have lived in Saigon for more than 20 years, but I think that Hoa’s porridge has the best taste. Although the shop sells cheap food to support the poor. But I can still work, so I still eat a bowl of porridge at a normal price, giving the support to those who are more difficult.” 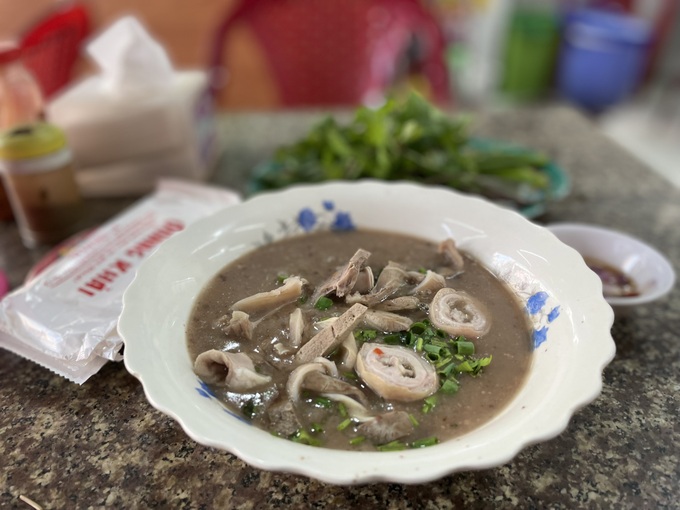 Although he sold a lot of money, Hoa and his wife were still happy with the good work they were doing. Many times seeing homeless people, and old people selling lottery tickets in the shop, they don’t want to take money, but many people still insist on paying. At that time, husband and wife often said “pay as much as you can”, so that the poor workers would not mind.

“My wife and I also live far away from home, we don’t have much in business, but whenever we can help someone, we always help, kindness is never wasted,” Ms. Dung thought.