Home / Travel
Unique skill of a fisherman who earns thousands of dollars of silver in the floating season
tranthuy02 11-10-2022, 07:44

Every day, Lam Thanh Nhan and his wife travel more than 40km from Chau Phu district (An Giang) to channel 13 in Phu Hoi commune to catch tens of kilograms of wild fish, earning more than 1 million.

According to the An Giang people, this year the flood season comes a month earlier than every year, falling from July to November (lunar calendar). The floating season not only brings alluvium to the fields but also brings abundant fish and shrimp to fishermen in the West. Many fishermen can earn tens of millions of dong when the flood season comes. PhatTurn on the sound

Phu Hoi commune, An Phu district, An Giang is a locality that is both adjacent to the Cambodian border and a watershed, which shows the characteristics of the West in the flood season. For more than a month now, since it is not yet morning, many fishermen have been present in the fields, busy fishing, creating a bustling living scene.

Reporter Dan Tri records the popular fishing activities of people during the flood season in An Giang “flood navel” : Fishing is the most popular method of fishing because it is possible to harvest many types of aquatic products at the same time such as fish, shrimp, crab and even snakes (Photo: Bao Ky). The bamboo is made from a mesh patched into a length from a few hundred meters to more than 1 km. After choosing a place to place according to the water flow with the fish running, the fishermen use a net around it to form a pot, each segment of the net is fixed with a long tree branch. In the pot, put 3-4 lugs, fish and shrimp can’t get out (Photo: Bao Ky). 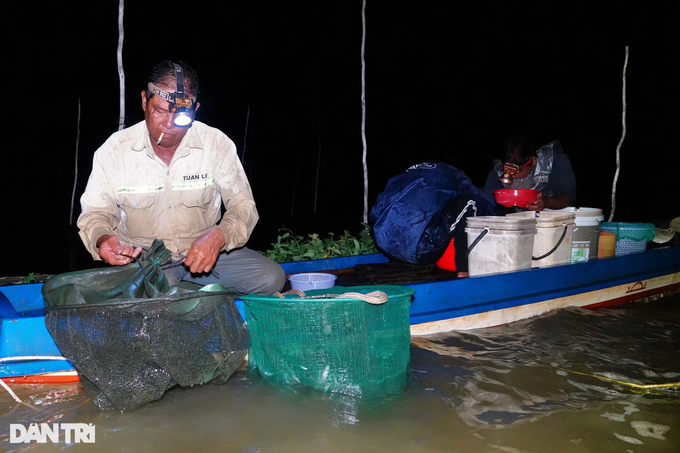 Mr. Nguyen Van Am said that it costs about 30-40 million dong to buy a swarm, including buying nets and trees. Those who have little capital will borrow money from the owner of the fishery to buy a set of fish, and every day sell fish minus the borrowed money. If the water is good, fish and shrimp are abundant, and at the end of the flood season, the fishermen have both paid off their debt to buy worms and made a few tens of millions more in profit (Photo: Bao Ky). 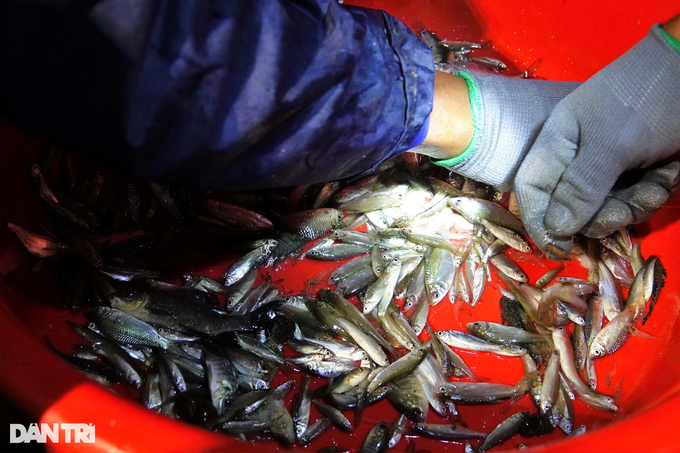 Dumpling fish is quite diverse, but when choosing, people will be divided into 2 types: Linh fish and market fish. In particular, reishi at the beginning of the season is called young reishi which is processed into a dish, and a larger one is used to brew fish sauce. Particularly for market fish, there are kinds of fish such as fish, pegs, choke… (Photo: Bao Ky). 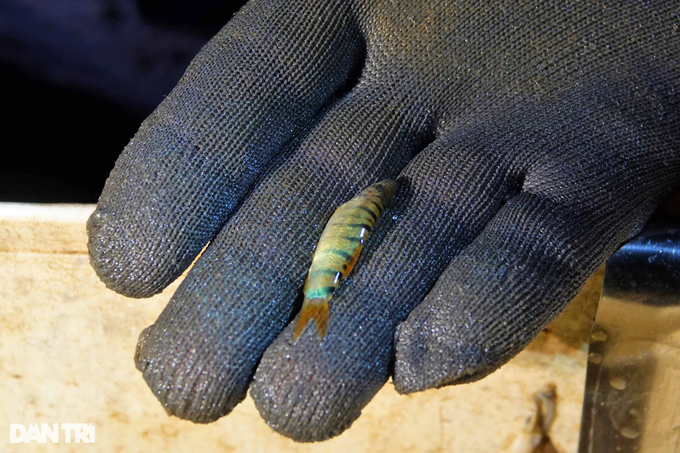 Red-tailed dolphins often appear in the flood season. Due to not being able to actively breed, red-tailed dolphins are quite expensive. Commercial fish costs 20$/kg, and fingerlings caught by farmers cost about 15$/kg (Photo: Bao Ky). In the flood season, Mr. Lam Thanh Nhan and his wife crossed more than 40km from Chau Phu district to canal 13 in Phu Hoi commune. Here, the couple covered the rubber hut for a temporary stay, at 1 o’clock at night they ran away and ran away. In the past few days, his family has harvested dozens of kilograms of reishi and market fish. If converted into money, the whole family earns over 1 million VND/day (Photo: Bao Ky). 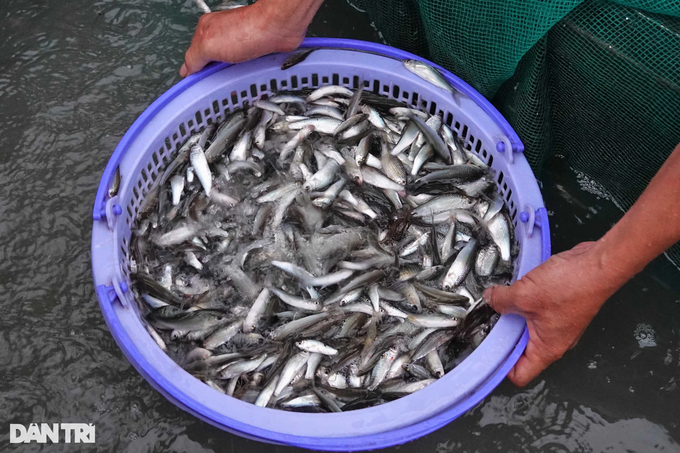 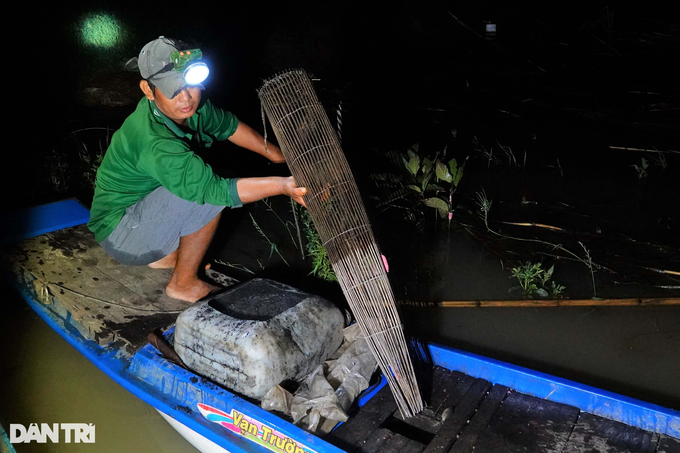 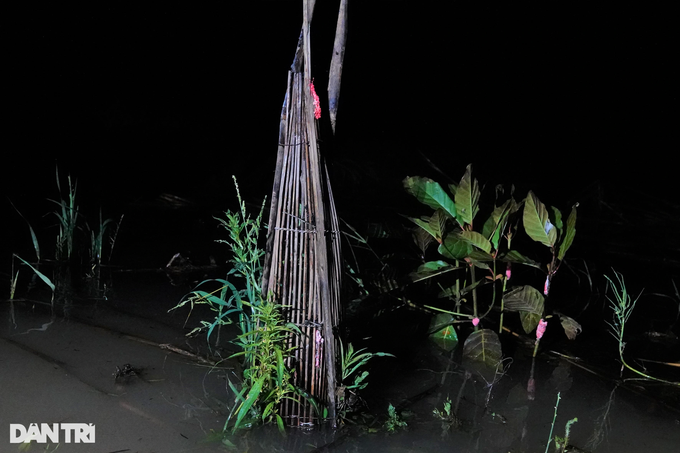 The rafters are made of bamboo about 60-70cm long, braided into a round shape like a jar, the top end is gathered in a pyramid shape, and the bottom end is round like the rim of a basket called the bottom. On the side of the rafters, in the middle is the entrance of the cave, also known as the hom, for the fish to get in (Photo: Bao Ky). 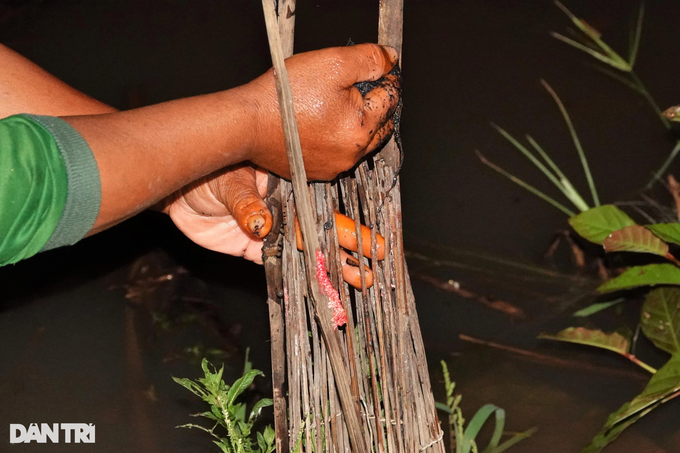 After placing the rafters near the grass, Mr. Linh picked up a handful of bait and put it in the rafters’ mouths. Trap bait made from fish carcasses and rice husk ash. (Photo: Bao Ky). 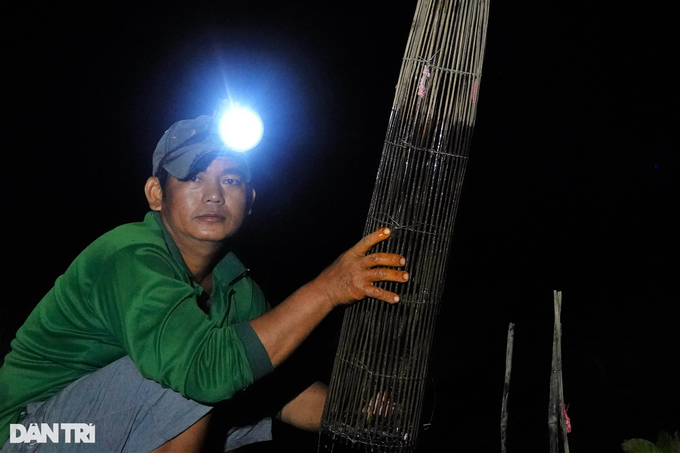