In early October, Tam Tien marine fish market stopped operating because in the rainy season, but dozens of basket boats still landed to sell fish. Fisherman Nguyen Ke, 50 years old, residing in Tam Tien commune, pulled the net ashore and then removed each fresh fish and put it in the basket. The result after three hours of fishing near the shore was 6 kg of small fish of all kinds, sold for 500,000 VND. 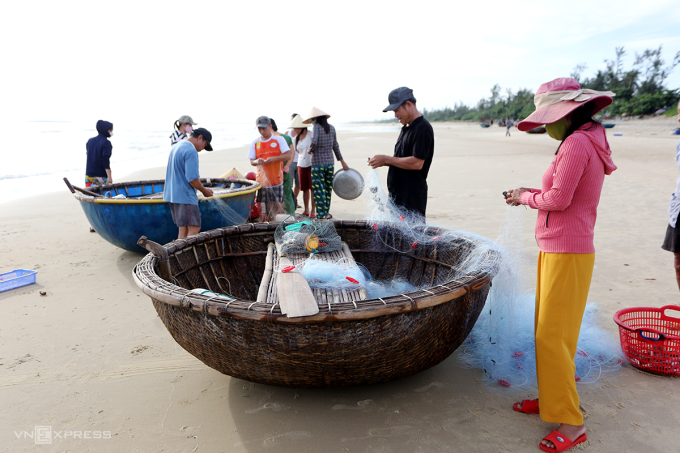 The basket boat docked the fisherman to remove the fish from the net. Photo: Son Thuy

To get that result, at nearly 3 am, Mr. Ke woke up to the beach about 300 meters away from his house. The basket boat lay on the sand, and he and the fishermen moved to the sea. In the dark night, he rowed the basket boat through the light waves to start a day of living.

The boat contains a net nearly 1,000 m long, 3 m high, 2 cm mesh. When he was about 200 meters from the shore, he dropped one end of the net into the water and rowed with his hand. The net is neatly arranged, so the boat goes wherever it goes, without having to remove it. After 30 minutes, the net forms a straight line in the sea.

It was almost morning, the waves were getting stronger, and Mr. Ke began to collect his nets and bring them ashore. On the shore, his wife is waiting to help her husband remove fish and sell on the spot to traders. “Apart from small fish, sometimes big fish and grouper still get caught in the net,” said Mr. Ke, who said the price of big fish was twice as high as that of small fish.

The coast of Tam Tien commune is more than 10 km long, after the storm Noru, the sea water is cloudy, the waves are big, so fish often come to the shore to live. About 3-5 hours a day, there is little wind, the waves are calm, and it is convenient for fishing by rudimentary basket boats. To catch a lot of fish, fishermen have to get up early to go to the sea, because when the sun is up, the waves are big, the small bamboo boat has to come ashore, otherwise it is easy to encounter whirlpools and capsize.

Also catching fish near the shore, Mr. Nguyen Anh Nhat, Tam Tien commune, said that every day he follows boats to the sea to capture squid. When typhoon Noru appeared, stop and switch to fishing near the shore. In order to practice this profession, in addition to the basket boat, he invested about 5 million VND in a net, which took 3 years to damage.

In order to work smoothly, besides Mr. Nhat, there is a colleague accompanying him, the boatman, the person who let go of the net. “The process of catching one person can also be done, but it’s a bit extreme, two people are stronger,” Nhat explained. 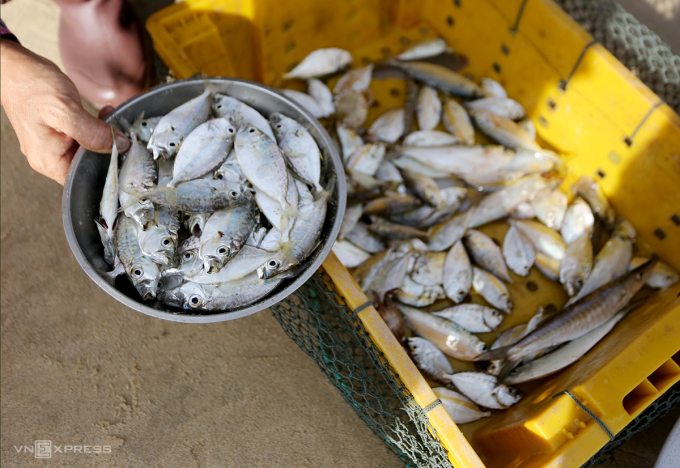 Fish are classified by traders before being sold. Photo: Son Thuy

Removed 4 kg of fish and put it in the basket, Mr. Nhat calculated the amount of money collected about 300,000 VND, divided by two people. “I didn’t catch a lot on this trip. The marine industry has an unstable income. Some days it’s lucky to earn more than a million dong, but some days it’s just enough fish to eat,” he said.

Ms. Nguyen Thi Lam, a trader at the beach of Tam Tien commune, said that every day, she buys about 30 kg, brings it to Tam Ky city to retail and import for clues. “Fishes caught near the shore are usually fresh, prepared with popular dishes such as sour soup, porridge, braised… very tasty,” she said.