These are all famous pho restaurants in Ho Chi Minh City for those who like traditional flavors.

Although it is not the “birthplace” of pho, this dish is still very popular with the people of Ho Chi Minh City because of its delicious taste and full of nutrition. Compared to Hanoi pho, pho in Ho Chi Minh City has some differences, although the ingredients are 95% the same. For example, it is not available with Banh Cuon, often served with herbs, bean sprouts, onions, and a sweet black sauce dipping sauce.

In Ho Chi Minh City, there are hundreds of pho shops in all districts. However, the shop has a long history of operation, is true to the tradition and mentioned the name that most people know, there are only a few shops. If you are looking to enjoy the taste of pho from your grandparents’ time, save these addresses immediately.

Appeared in 1954, Tau Bay is the oldest pho restaurant in Ho Chi Minh City, almost everyone knows when it comes to the name. The bowl of pho here is called “the biggest in the city” by many people because the noodle soup, beef, and scallions are full. Just eat 1 bowl, you can be full until noon, until evening. 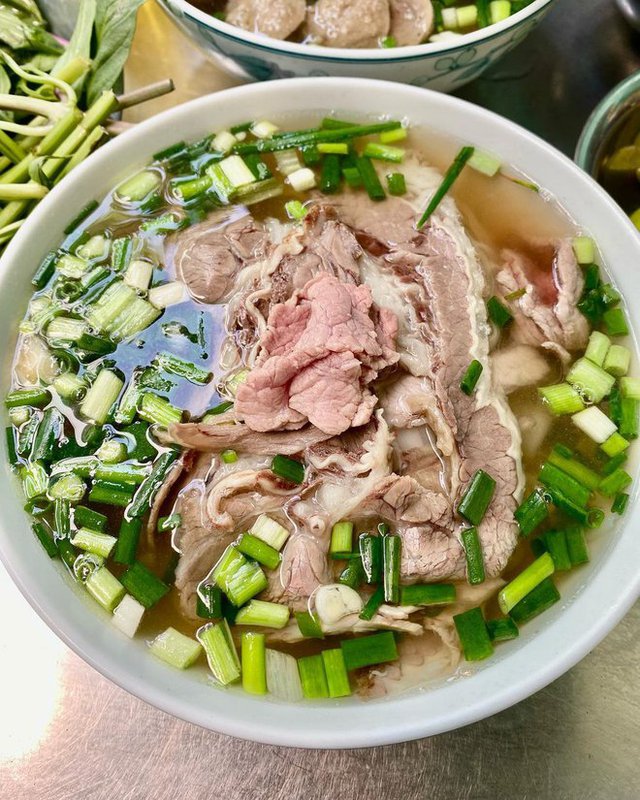 Although it has been sold in the South for a long time, Tau Bay restaurant still retains a bit of northern pho style when there are no bean sprouts. The ingredients of a bowl of pho are only pho noodles, large sliced ​​fresh beef, beef balls, scallions and golden broth, with a characteristic sweet and fatty taste from the bones stewed for many hours. Comes with each bowl of pho is a plate of vegetables including cilantro, basil, lemon, chili, and sweet black sauce on the table for you to taste as you like. Currently, the shop has 2 types of pho, the regular type with the price of 60k and the “super-giant” train noodle with the price of 70k, you can choose the type that suits the capacity of your belly. 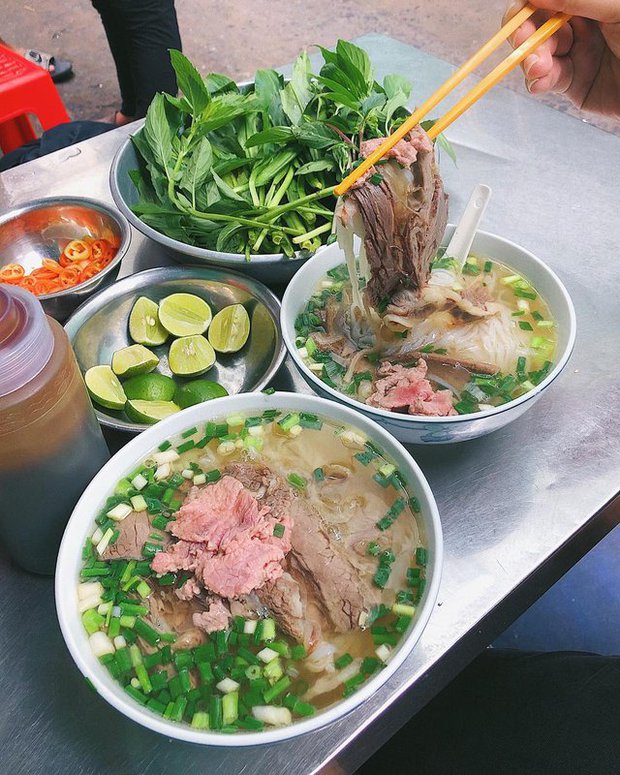 Hidden in a small alley on Nam Ky Khoi Nghia Street, the Rooster Pho restaurant has been in Ho Chi Minh City since 1958. Pho here is quite expensive, up to 100k for the special bowl and the regular bowl also fluctuates. dew” from 65k – 90k but guests still sat at the table. Even overseas Vietnamese or foreigners often come here to eat. 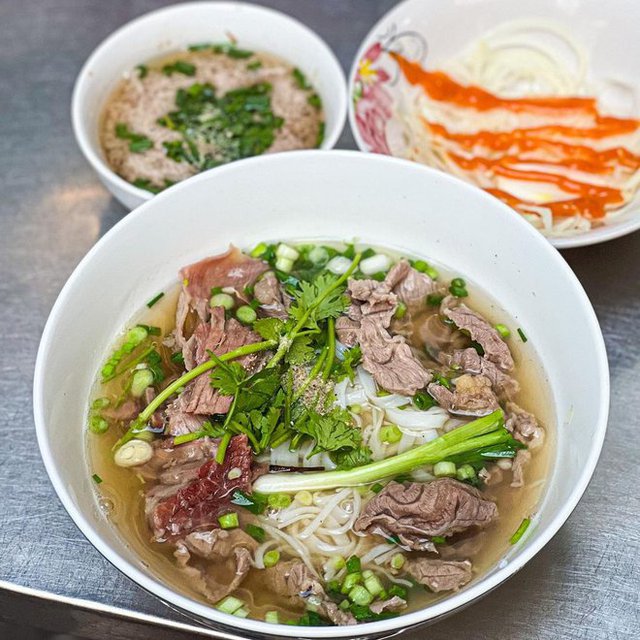 In Pho Dau, there will be no herbs, bean sprouts or black sauce, but only a plate of thinly sliced ​​onions soaked in vinegar, mixed with sugar and chili sauce to serve. In addition, the ingredients of each bowl of pho are only cooked or rare beef, not other dishes such as beef tendons, beef balls, etc. The most outstanding feature of Pho Dau is the clear broth, which has an easy sweetness. bear and wake up the aroma from anise, cloves, etc. In addition, when eating pho with pickled onions, it will give a very unique flavor, not mixed with any other pho restaurant. 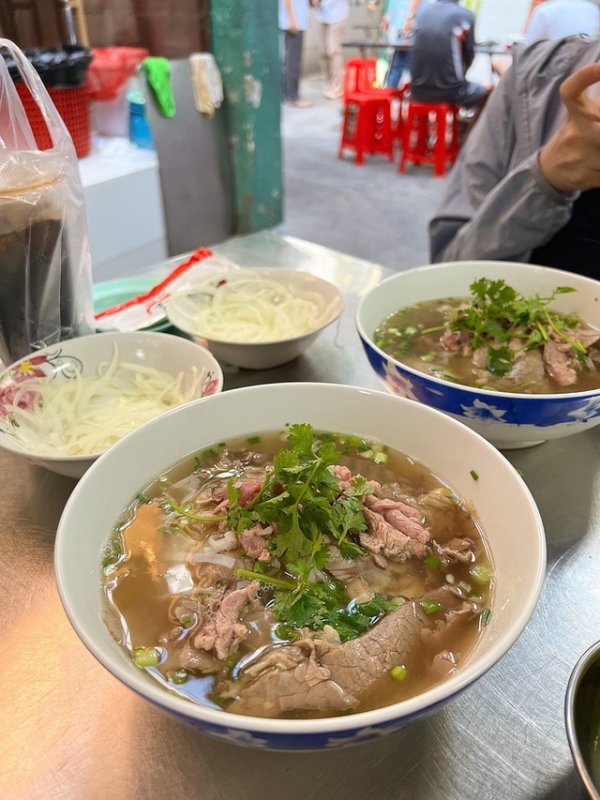 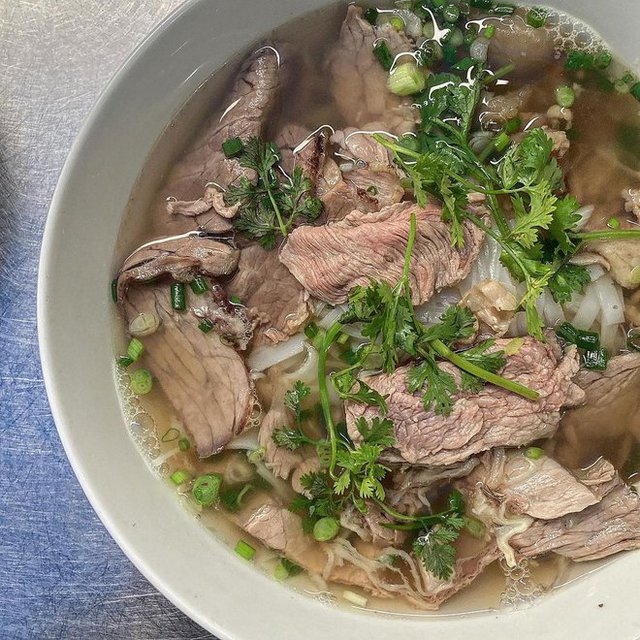 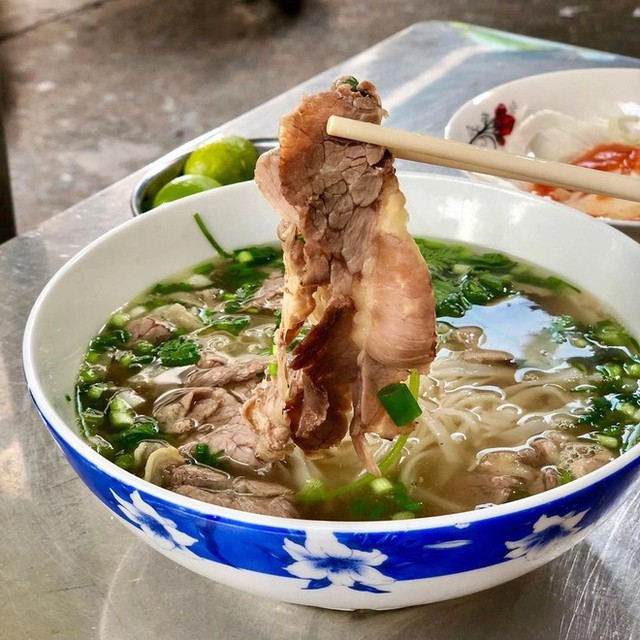 Starting from just a small cart sold on the roadside, over the years, Pho Hoa has become a famous dining address in Ho Chi Minh City. Up to now, the shop has been operating for more than 50 years and is well liked by international guests. 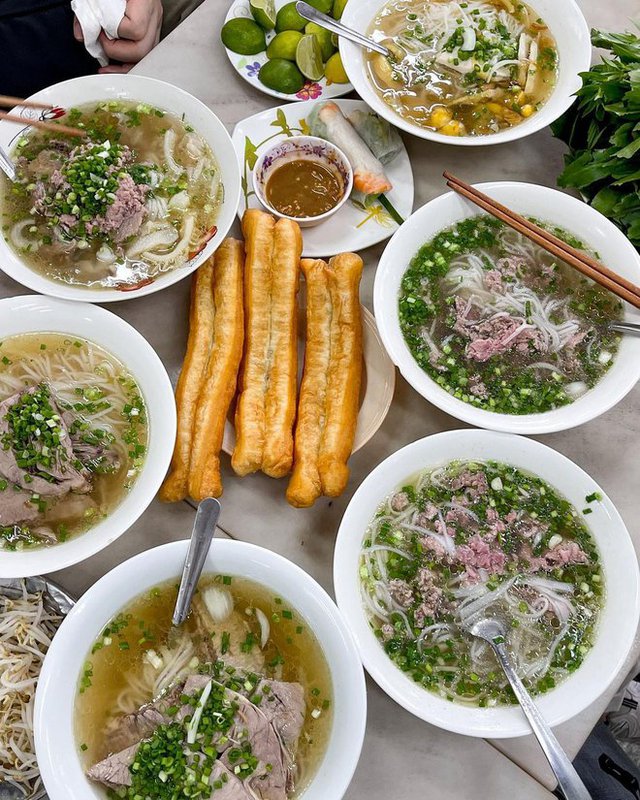 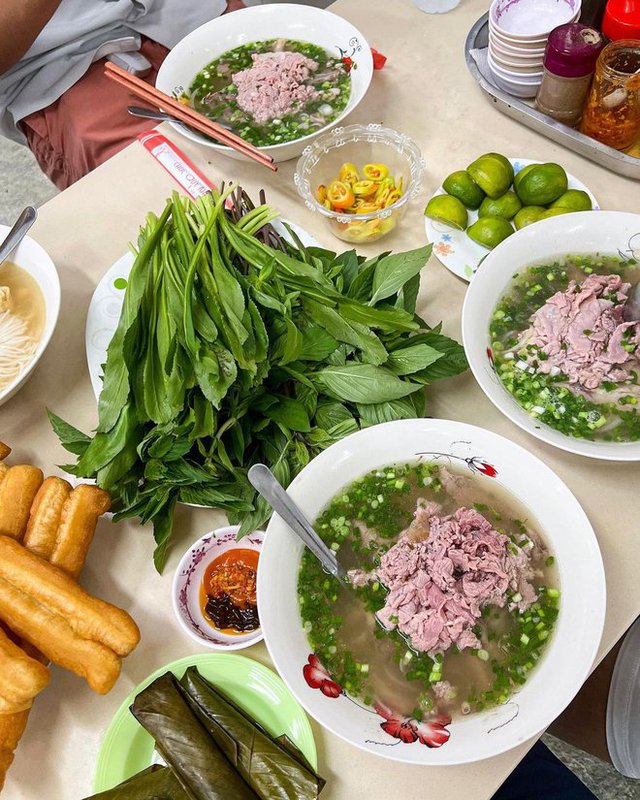 A bowl of pho here is quite quality with a smooth white noodle, especially the beef is very fresh, thickly cut, when you bite into it, you can feel each soft fiber. The restaurant’s broth is simmered from beef bones and seasoned with natural sweetness, so it is suitable for many people’s taste. When ordering pho, you will be served an extra plate of vegetables and sprouts to put in the bowl of pho. In addition to the traditional noodle soup, you can choose from many other side dishes such as encrusted, tendon, bucket, beef balls,… More specifically, although sold in Southern style, there are also crispy golden crackers here. to eat with pho. Each bowl will usually cost from 65k – 80k. 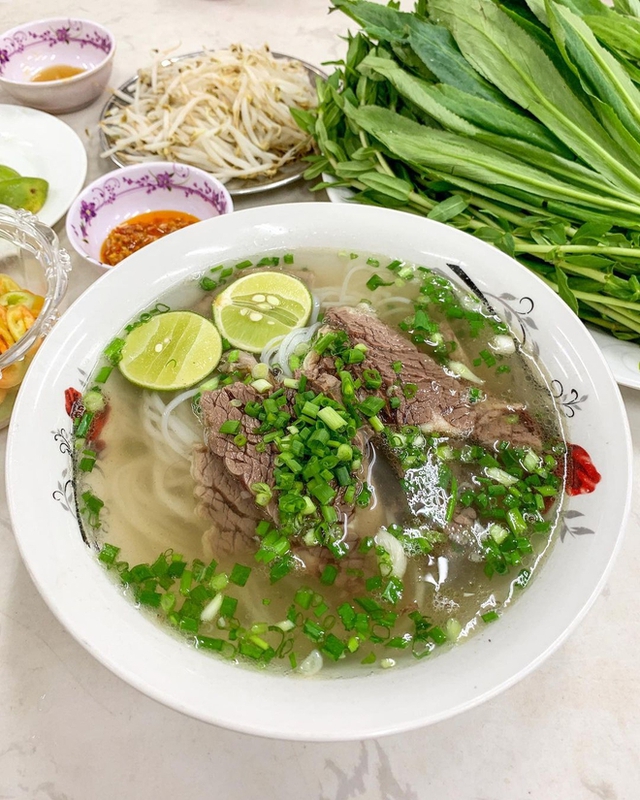 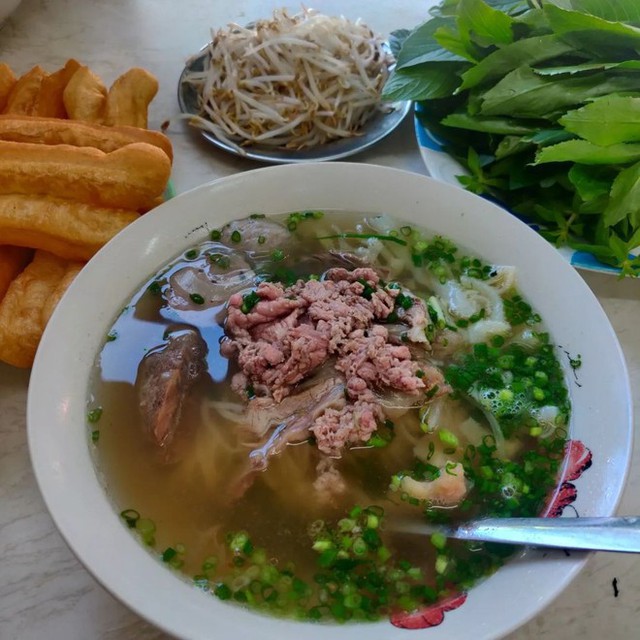 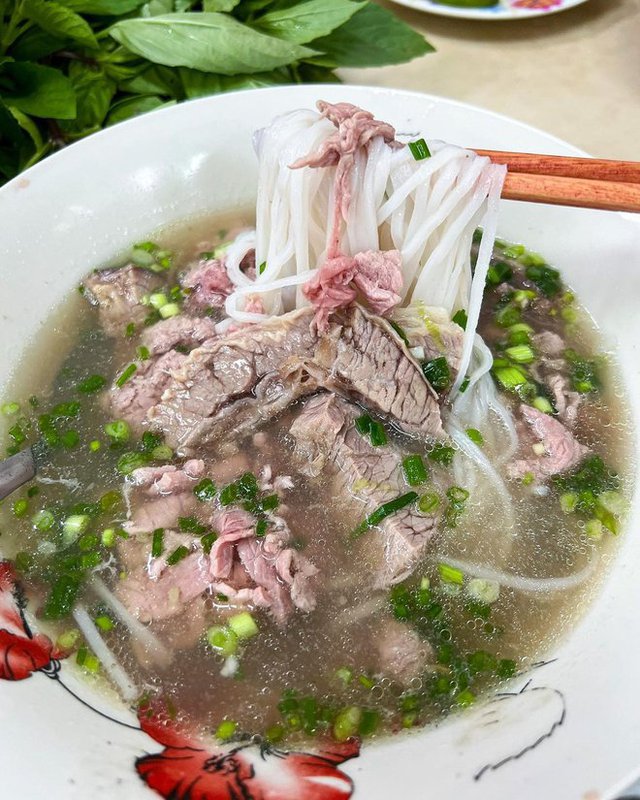 Located in the heart of bustling District 1, Cao Van Pho restaurant for more than 60 years has been a familiar dining place for many generations. The price here is also quite reasonable, only from 50k – 60k for a full bowl. 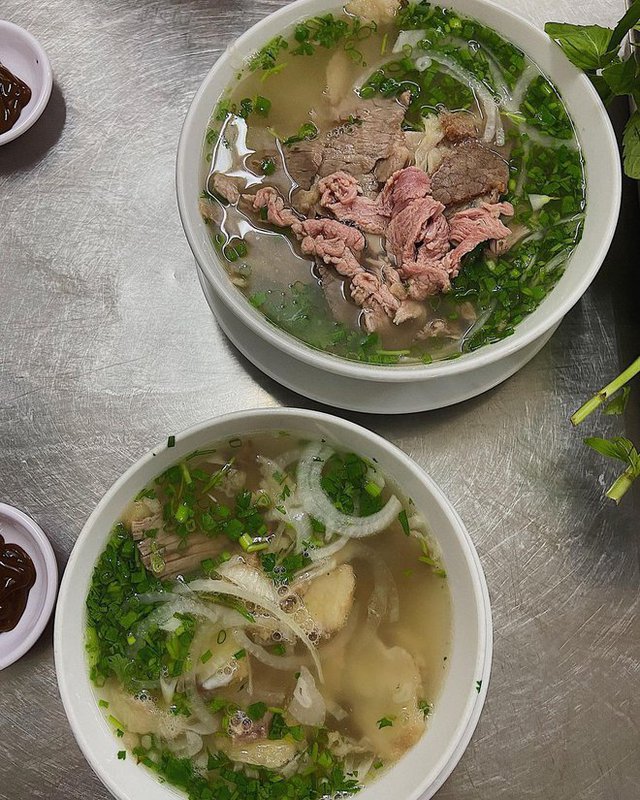 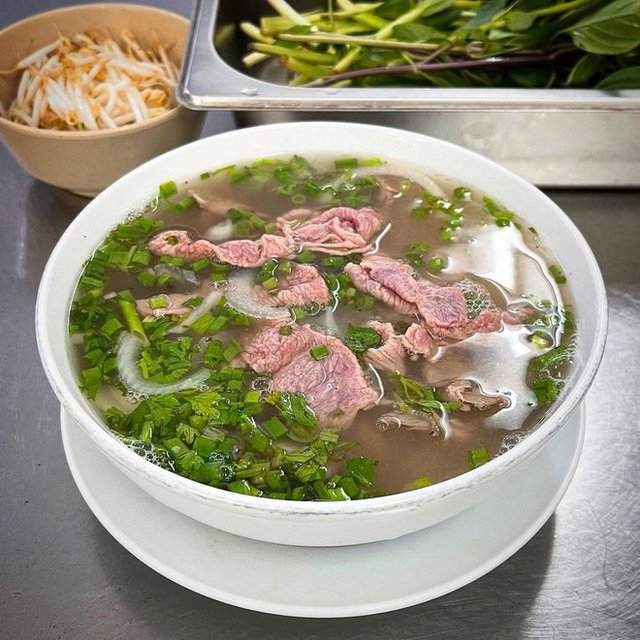 The impressive point of Cao Van Pho is the clear broth, traditional flavor, not greasy. The part of pho here uses small fibers, which are given a lot, plus tender beef and green onions and onions to make up the nose. On each table are also placed herbs, bean sprouts, lemons, chili, sauces for you to taste to taste. In addition, when going to Cao Van Pho restaurant, you definitely have to try the fatty pan of beef, the restaurant has a soft stew but still retains the texture, making sure to eat is “addicted”. 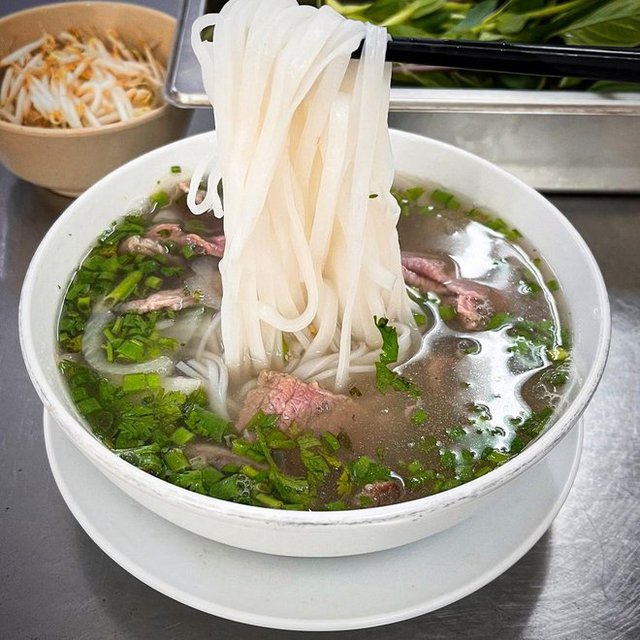