Made from cockle – a unique product only found in Quang Ninh waters, this noodle dish impresses diners with its sweet and sour broth and rich, greasy meat.

Referring to Quang Ninh cuisine, people often think of attractive dishes such as Ha Long squid rolls, humiliation, Tien Yen hill chicken, and Dong Trieu fried rice,… In addition, this sea also owns a series of special features. products that visitors can only find here, such as the tick.

Cuckoo (also known as thunder crab, rock crab, or shackle crab) is a species of crab that lives in rock crevices, wood chips along coasts and mangroves. They can grow to large sizes (up to 12cm wide) and feed on small plankton and crustaceans.

According to local people, the tick is in the same family as the crab, but has a significantly larger body compared to its body size and has a brown shell and green eyes.

This is a warlike, stubborn animal with strong claws, so it is very painful to clamp. It is believed that the tick will only let go of the opponent when there is thunder, so it is also known as a thunder crab.

There are two types of ticks: black ticks and red ticks. Red ticks have an eye-catching appearance and better meat, so they are often caught and processed. 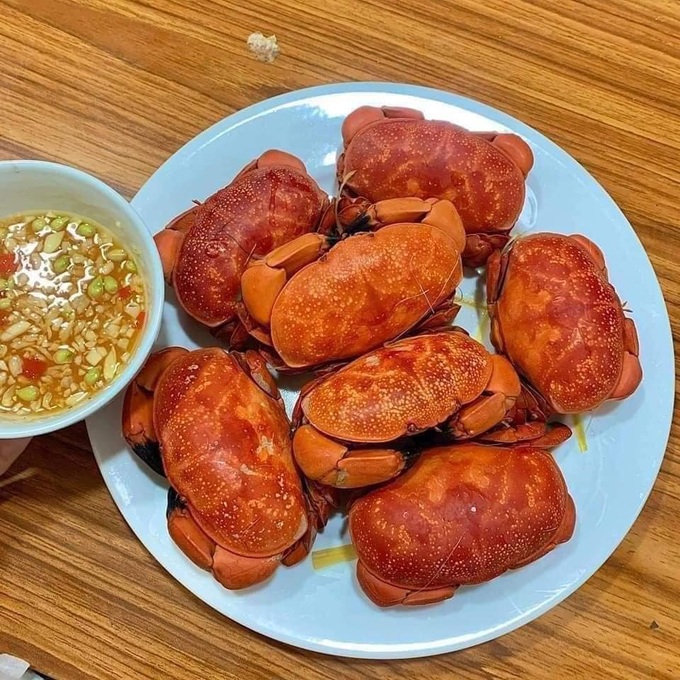 One pound of ticks can get about 7-9 fish. This seafood is processed into many delicious dishes, but the most famous and popular with guests is Bun Cu Ky (Photo: Dung Pham).

The reason why crabs are expensive is that their taste is quite strange and fragrant, different from other crab species and often processed into many nutritious dishes. Among them, the most famous dish is the noodle soup of the Quang Ninh people.

No one knows when Bun Cu Ky appeared, but according to many locals, this dish was created by fishermen in the fishing village.

In the coyote season, after catching it, instead of just baking and steaming as usual, they devised a way to cook the fish into vermicelli, both filling the stomach and taking advantage of the greasy brick of this crab. Bun Cu Ky is a famous dish of Ha Long people, attracting tourists from all over the world to enjoy (Photo: Sang Doan Dang).

Ms. Nguyen Thanh – the owner of a restaurant in Ha Long city said that only the part with more meat and the body is quite spongy, usually pureed and filtered to make broth.

“Crabs don’t have as much meat as other crabs, but they have a sweeter and fatter taste. The meat in their claws is quite soft and has a strong flavor, so both adults and children like it,” said Ms. Thanh.

According to Ms. Thanh, for the dish to be delicious, it is necessary to use all the ingredients from the tick.

Cu Ky is preliminarily cleaned, separating the meat, bricks and shells. The body without meat will be pureed, filtered to get the juice to cook the broth, while the bricks are processed like crab sauce, giving the dish an eye-catching appearance and attractive flavor. 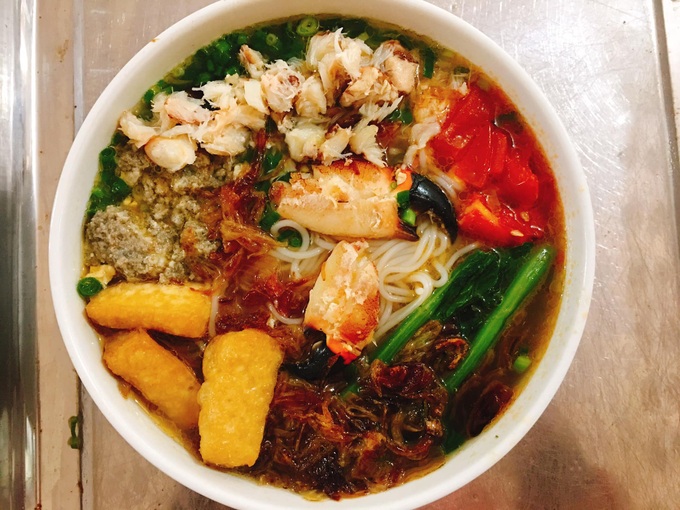 Cu Ky vermicelli is processed like vermicelli but the taste is completely different (Photo: My Tuyet). 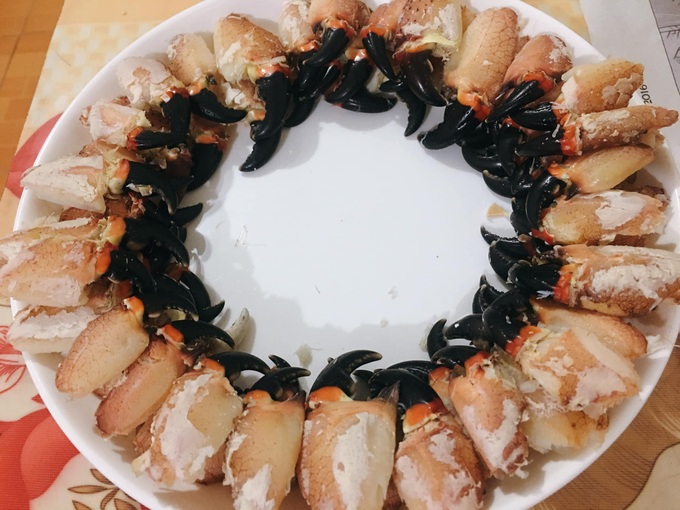 The corkscrew is pre-processed and cleverly dissected to keep its original beautiful shape (Photo: My Tuyet).

The bigger the tick, the more sure the meat is cooked, then break the hard shell, cleverly separating so that the meat remains in its original shape. This meat is used for the final decoration, presented on a bowl of vermicelli.

Bun Cu Ky is cooked like crab vermicelli, so it has a fragrant, sour taste that is easy to eat, enough to make diners feel the soft and sweet meat, greasy bricks and rich broth.

A bowl of vermicelli noodles costs from 40,000 to 55,000 VND, depending on the meat that the customer orders. In Ha Long, there are a number of addresses serving this unique dish for visitors to refer to such as: Thanh Loc restaurant in Dai Yen ward; Cu Ky noodle shop in Garden, Cai Dam, Bai Chay, …

Doan Sang (in Hanoi) has many times enjoyed vermicelli noodles – a famous specialty of his hometown.

A young man from Quang Ninh commented that this noodle dish has a very unique flavor because the broth is cooked entirely from cockroaches, has a characteristic sweetness and an attractive aroma. 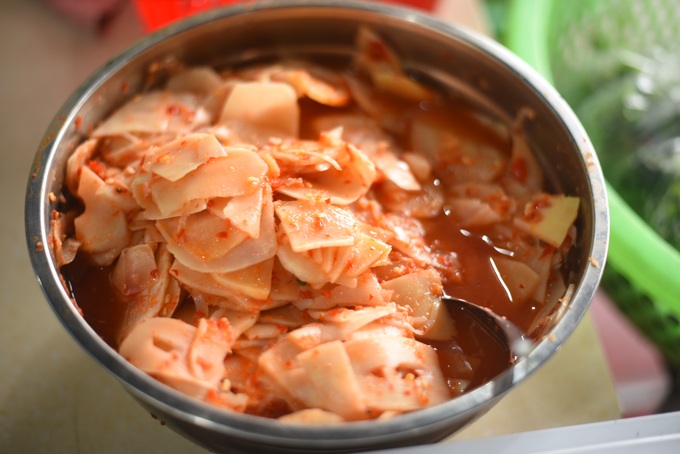 “Chu Ky vermicelli in Ha Long has a mild sour taste quite similar to seafood vermicelli, crab vermicelli in Hanoi. I feel the broth has a sweet taste mixed with a bit of meat and brick, so it’s easy to eat. The meat is also quite soft, has a characteristic aroma and is not fishy like many other seafood noodle dishes,” Sang shared.

Similar to Doan Sang, Thu Hang (office worker in Hanoi) said that she had eaten vermicelli noodles in a few places but only Ha Long vermicelli made her most satisfied.

Every time she has the opportunity to visit Ha Long, the young girl always goes to a familiar restaurant to enjoy a bowl of vermicelli filled with meat. Even sometimes, Hang invites friends, drives nearly 200km to Ha Long just to eat this noodle dish. 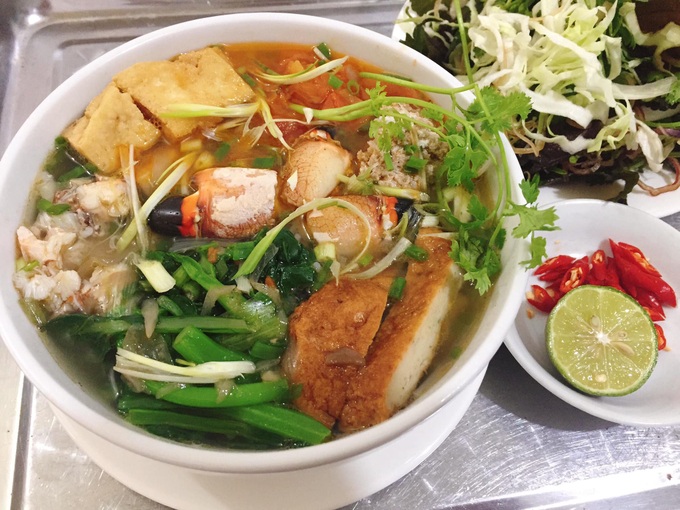 Diners can enjoy the meat and order more toppings such as fish cakes, squid rolls, crispy tofu,… and serve with raw vegetables (Photo: My Tuyet).

“The meat is more ticklish, though not as sweet and bold as sea crab meat, but more fragrant and not boring to eat. Their claws are also firm, so I feel good to eat, satisfying my craving for seafood,” Hang shared.

Bun Cu Ky is enjoyed with sweet and sour pickled bamboo shoots and chopped raw vegetables. Visitors can dip raw vegetables in the broth until they are ripe or dip them with fish sauce, pick up a piece of vermicelli and meat and then slowly slurp the sour, sweet and sour broth.