In the morning of mid-September, Ms. Nguyen Mai Hue, 40 years old, residing in Yen Du village, Duc Linh commune, wore protective gear, carried an iron ladder, carried a lane and a plastic basket to the hill garden behind her house to pick persimmons. Her family planted 200 persimmon roots, this crop more than 20 roots for fruit, each kg sold in the garden for 40,000 VND, now consumed nearly 3 quintals, at the end of the crop is expected to collect about 200 million VND.

According to Mr. Nguyen Van Thanh, Chairman of Duc Linh Commune Farmers’ Union, Yen Du seedless crispy persimmon was grown locally hundreds of years ago. This area is hot during the day and cold at night, suitable for plant growth. The whole village has 80 households growing on about 40 hectares. If the seedlings are planted in other places, the plants do not match the soil, and still bear fruit and flowers, but the intestines will lose the inherent sweet and crispy taste.

Hong Yen Du is considered a precious gift of Vu Quang district, and has been recognized by Ha Tinh province to achieve 3-star OCOP – one product per commune program. Due to the prolonged heat, this year the output of persimmons in the whole commune is only about 20 tons, a decrease of more than 10 tons compared to last year.

Persimmons are seedless, so they cannot be propagated. The method of extracting or grafting branches is also ineffective. Therefore, gardeners often cut the roots off from the mother plant, then dig a hole about half a meter deep, and pour manure down to plant.

After 5 years, the tree produces fortune-telling, and it is not until the 10th year that it begins to be harvested. On average, each canopy tree is more than 4 m wide, 5-10 m high, and produces 2-3 quintals of fruit. The older the tree, the higher the yield and yield, with the root reaching more than 5 quintals of fruit. Therefore, the garden owner only replaces the new one when the tree is broken or uprooted due to natural disasters. 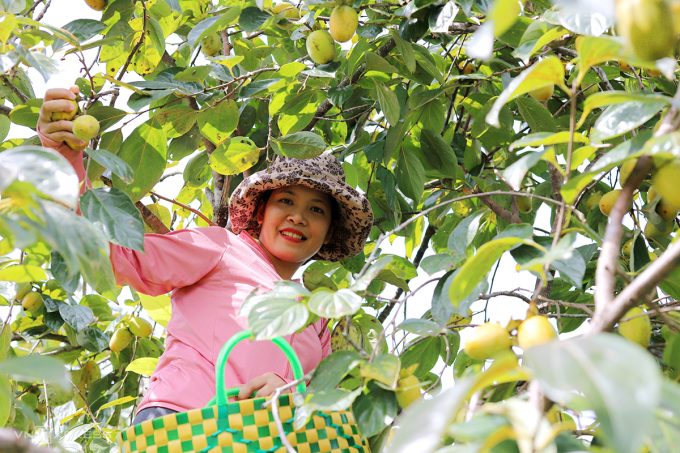 Ms. Luyen is climbing a tree to pick persimmons from above. Photo: Duc Hung

Hong Yen Du is easy to grow, with little care, people often grow it in hilly gardens, interspersed with other fruit trees such as oranges, lemons, grapefruits, jackfruits… “This plant is rarely attacked by insects. every year, I only apply manure under the roots to provide resistance,” said Ms. Hue, adding that in the winter, the tree loses all its leaves to get nutrients for the body. The plant blooms in February and bears fruit in August.

Climbing on a tree 5 m high to pick persimmons, Ms. Nguyen Thi Luyen, 29 years old, residing in Yen Du village, constantly receives calls from customers calling to order. This season, the family has 15/100 persimmon trees for main fruit, the output is estimated at 3 tons. So far, she has sold more than 2 quintals, earning 8 million dong, expected to make a profit of about 120 million dong at the end of the crop. Picked fruits are sold out, sometimes there are not enough goods to import.

Ms. Luyen said that harvesting persimmons is quite difficult. With trees nearly 10m high, people have to wear belts, use iron hooks to anchor them to the trunk or large branches to avoid accidents. Once, unfortunately, a rotten tree branch was broken, she fell from a height of about 3 m to the ground, causing soft tissue injuries. “Usually, men are in charge of picking fruit, only when they are not at home do women have to go to the garden,” she said. 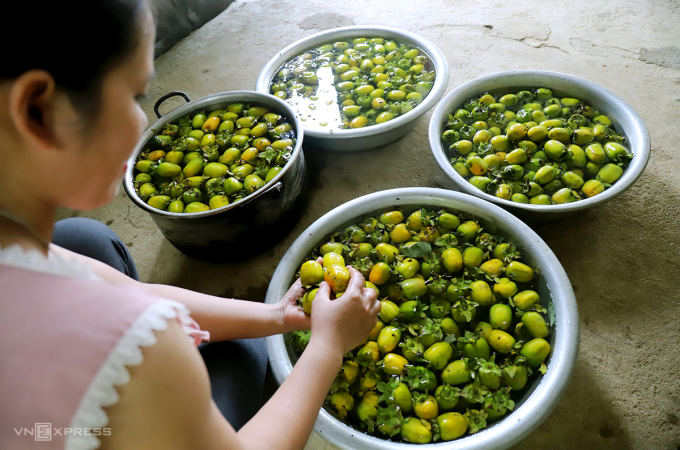 Persimmons picked from the tree are soaked in cold water to produce latex. Photo: Duc Hung

Persimmons, after being picked from the tree, have a bitter taste. Ms. Luyen had to wash the fruit and pour it into an aluminum pot, scooping cold water to soak persimmon for two days and one night. After this time, the latex will escape through the stem, from which the intestines will precipitate sugar and bring a characteristic sweetness.

Chairman of the Farmers’ Association Nguyen Van Thanh added that from the tree species planted to create shade, Yen Du persimmon has now become a commodity tree to help farmers get rich. Each crop, on average, a family collects 100-200 million VND, and many households own a large area, making a profit of 300 million VND a year.

“To help people build the Yen Du persimmon brand, the commune has supported the establishment of a pink cooperative group with 10 members. In the near future, the locality will process steps in production such as packaging, labeling, and traceability. source to improve product value, help persimmon growing households have more income,” said Mr. Thanh.

Hong Yen Du is sold by Vu Quang people to traders in the province, imported at local markets or sent to the South and Hanoi for consumption.