Not only standard ingredients but also the skill and mind of the baker have created their own brand for Ha Tinh ram.

Nem is a famous dish of Vietnamese people with the name “fried spring rolls” in the North, the Southern dialect calls “spring rolls”, and most people in the Central call it “ram” or cha ram (only in Thanh Hoa called it. either cha or cha).

Enjoying the Ha Tinh ram dish, diners will clearly feel the difference by slightly adjusting compared to the general recipe to better suit the taste of the region. The unique feature of Ha Tinh ram is that there are more vegetables than meat, and the ram skin is crispy, so it is not as boring as spring rolls or spring rolls.

Ha Tinh people have a very special way of making ram shells. Because the main ingredient of the ram shell is made from rice and molasses, the selection of ingredients is also very elaborate. 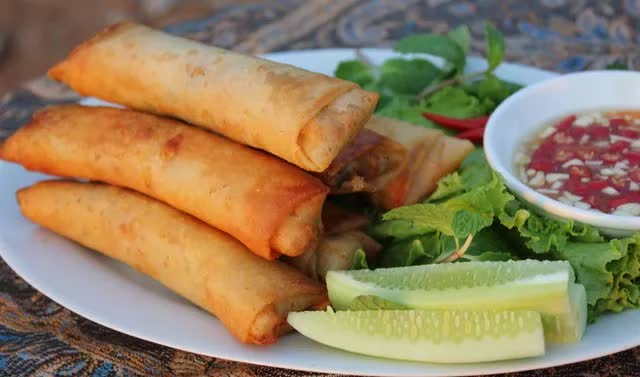 To get a good crust, the rice for making the ram must be genuine Khang Dan rice. After soaking overnight, the rice is milled into a powder of moderate fineness, leaving a bit of fiber to create a bond for the cake.

Regarding molasses, in Ha Tinh, there are many famous honey production places such as Huong Binh, Thach Kenh, Tho Dien… It is the source of raw materials that ensures the unique flavor of Ha Tinh molasses that is difficult to find. which can be compared. Product quality is also superior to many other places thanks to the advantages of climate and soil, so sugarcane is firmer, sweeter and has a very high sugar content. 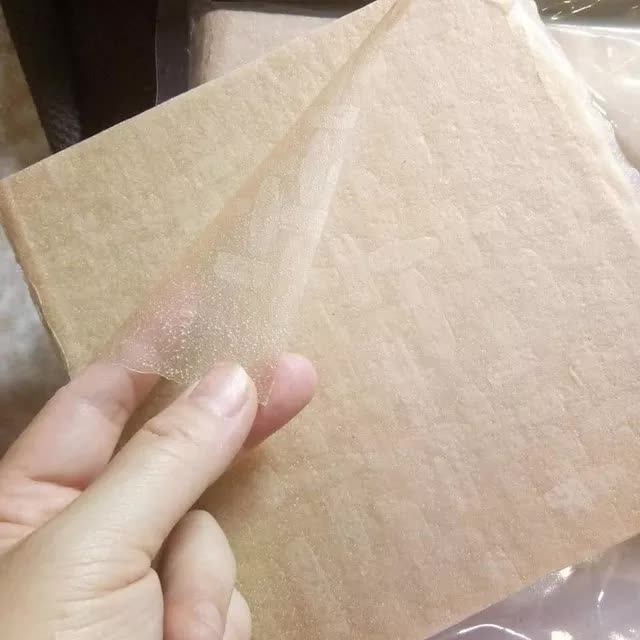 The ram shell is made from rice and molasses (Photo: lemontuoi)

Not only standard ingredients, but also the skill and mind of the baker has created its own brand for Ha Tinh ram shell.

Thanks to being sun-dried and incubating, Ha Tinh ram shell is soft and supple, easy to roll, when fried, it becomes golden yellow, not absorbed by fat, especially without the salty taste like other types of spring rolls. 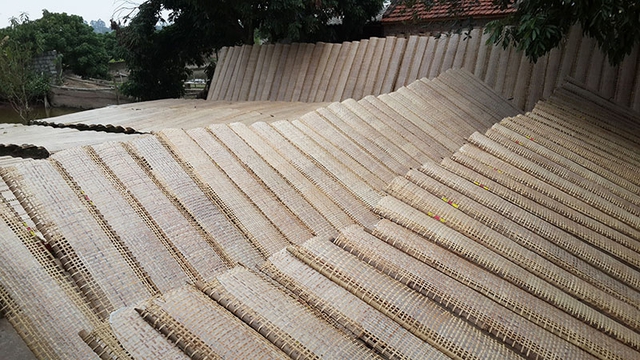 The process of baking and drying the cakes is completely handmade. According to the traditional way, after being coated, the cake is spread on each bamboo screen (in some places it is called shanghai, bamboo …) This is also the secret to making the cake leaves more flexible, soft and not broken.

When the cake is just dry enough, remove it from the pan to cut it to size 18cm x 18cm, then tie it into dozens or hundreds of cakes depending on the quantity ordered. The technique of drying the cake and turning each plate also contributes to the quality of the ram shell.

If it rains, the crust will be moldy, while drying in the sun or in a place where the wind is blowing, the cake will dry out quickly, crack easily and cannot be wrapped. In unfavorable weather conditions such as heavy rain, people can use a drying fan for about 10 to 12 hours to ensure the quality of the crust is always satisfactory. 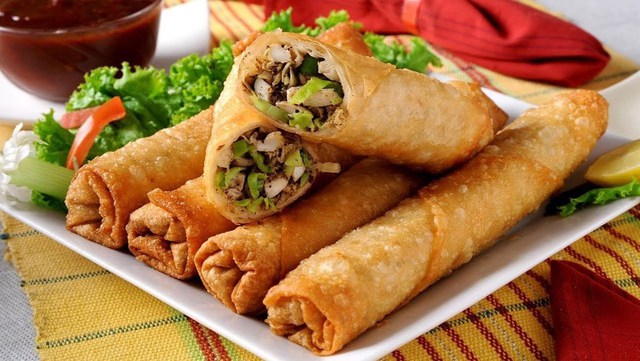 The main vegetable in the ram is coriander (Photo: daynauan)

Because the ram shell does not use preservatives, at room temperature, the cake can be kept for 5 days, if kept in the refrigerator, it will be about a month, but it will be a year if stored in the freezer.

After taking it out of the refrigerator for about 10 minutes, the cake will be as soft as new. However, a small trick that Ha Tinh people often “leak” each other is to put the cake in a bag, pack it wherever you go, take it out, don’t let the whole cake file out because it encounters air, the cake is easy to dry and harden. hard to roll into ram.

The general recipe of fried spring rolls includes ground meat mixed with vegetables, spices, rolled spring rolls and fried until crispy golden brown. More advanced, the spring rolls have more crab or shrimp, depending on the region, creating a richness for Vietnamese cuisine. 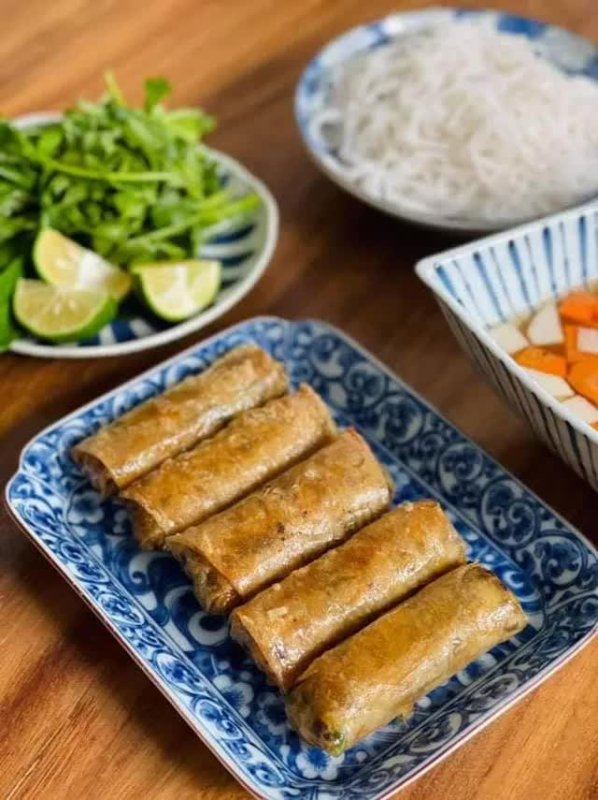 The dry – wetness of the crust and the filling will determine the crispiness of the ram (Photo: melon)

Ha Tinh also follows the same recipe, but does not add carrots or bean sprouts like spring rolls in the North, nor cinnamon like spring rolls in the South. The main vegetables in the ram are cilantro (a type of coriander leaves with small leaves, many thorns, very fragrant and fragrant) and green onions (must use spring onion leaves, also called compressed bulb leaves to taste the best taste). ).

The ram kernel chooses the shoulder meat, which is both lean and fat, when eaten, it is not dry but not boring. Minced meat, not pureed, add chopped wood ear, soft soaked rice vermicelli, cut short, smashed onion, minced, mix a little seasoning powder, pepper, egg yolk, knead well to make the filling flexible. , blend and thicken. Note that do not put too many eggs and do not let the filling get too wet because the dry – wetness of the crust and the filling will determine the crispiness of the ram.

The trick to crunchy ram is to roll the ram to the right size, about the size of 2 fingers to look good and delicious. Because ram is too big, it will be difficult to fry crispy because it soaks up a lot of grease, if it is too small, the ram will be hard or burnt. In addition, when rolling ram, just dip a little water on the edge of the cake (enough to stick to your hands) because if you sprinkle a lot of water, it will make the ram shell soft, squishy or broken. 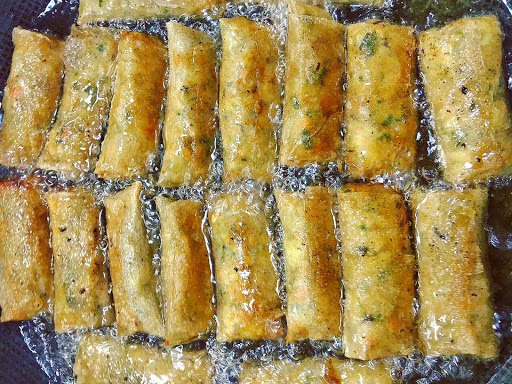 A small tip for crispy ram is to roll the ram in the right size (Photo: Doanhnhansaoviet)

Pouring oil into 2/3 of the ram is just enough for the ram to cook without soaking the oil. Wait for the oil to boil, then drop the ram in, then lower the heat gradually, fry it. Before eating, fry again, called “fried twice” (this tip applies like french fries). Should be fried one batch at a time, without a pillow to avoid forgetting which one to put in first, which one to put in later. When the ram is golden, take it out separately to drain the oil, avoid turning it over when it’s hot, it will cause the ram to rot.

The dipping sauce used to dip ram is usually thick. To make the dipping sauce, people crush garlic, chili, add sugar and warm water (about 40 degrees) and stir well, helping the garlic and chili essential oils to be released, then squeeze the lemon juice and then finally prepare the sauce. suitable sauce. The people of Nghe An often eat ram with Banh Chung (another name for “Banh Cuon” in the North and “wet cake” in the South) – a type of rice paper made from plain rice flour as a special gift of this place. . Ram cake is a harmonious combination of two different types of cakes, suitable for the four seasons of Vietnam.

When eating, people roll ram with smooth bread, dip it with lemon garlic chili sauce, add little raw vegetables, gradually feel the crispy fat of the ram, the suppleness of the cake, the sour taste of chili sauce mixed with the smell of herbs. tip of the tongue, making the taste linger forever.