Home / Travel
The land between the mountains and forests is likened to the “first spirit mountain” of Vietnam: Scenery with an ancient flavor
daitranvan 12-09-2022, 09:02

Many people, even though they have traveled all over the world, when arriving in this land, they are still full of emotions and feel like they are “returning to themselves”.

Located among the majestic mountains and forests of the spiritual land known as the “first spirit mountain” of Vietnam, Yen Tu Mountain belongs to Uong Bi city, Quang Ninh province, about 50km from Ha Long Bay, associated with the famous name. of Buddha Emperor Tran Nhan Tong, Truc Lam Yen Tu Zen sect and the history of the sacred mountain from thousands of years ago. Legend has it that there was a monk An Ky Sinh who went to this mountain to practice immortals, practice medicine, cure diseases and save people. People reverently called him An Tu (Master An) and called the mountain An Tu Son – the origin of the name of the present place Yen Tu.

An important historical milestone more than 700 years ago, the wise emperor Tran Nhan Tong gave up the throne to Yen Tu to practice and enlighten the Buddha. He is the only emperor in the world who has ever ordained and attained Buddhahood. He founded and became the First Patriarch of Truc Lam Zen School – a Zen line imbued with Vietnamese identity, with the desire to build a happy and good-oriented nation. 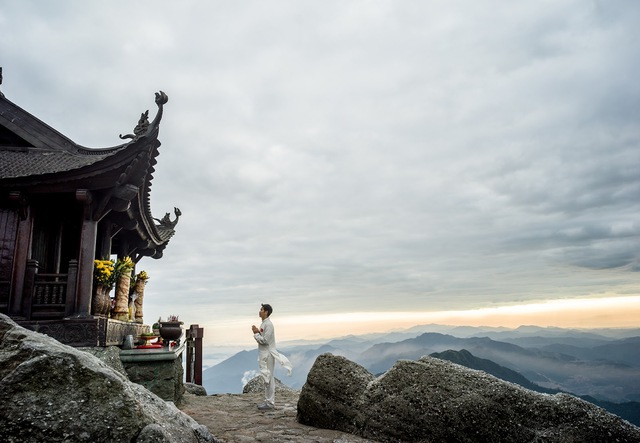 Located at the foot of the sacred Non-Yen Tu and inheriting the heritage of the mountain, Truc Lam Cultural Center with elements of Legacy Yen Tu – MGallery, Nuong Village, Truc Tam Dao … is both a unique cultural space with a unique cultural identity. Echoing the Tran Dynasty (13th century), connecting religion and life, past and present, has just created a special resort complex.

Since then, Yen Tu is the birthplace of the Truc Lam Zen sect, which is considered a Buddhist holy place in Vietnam from the 13th century to the present. Yen Tu Mountain has become a national cultural heritage in Quang Ninh province, with many great values ​​of culture, history – nature – spirituality, attracting a large number of domestic and international tourists. 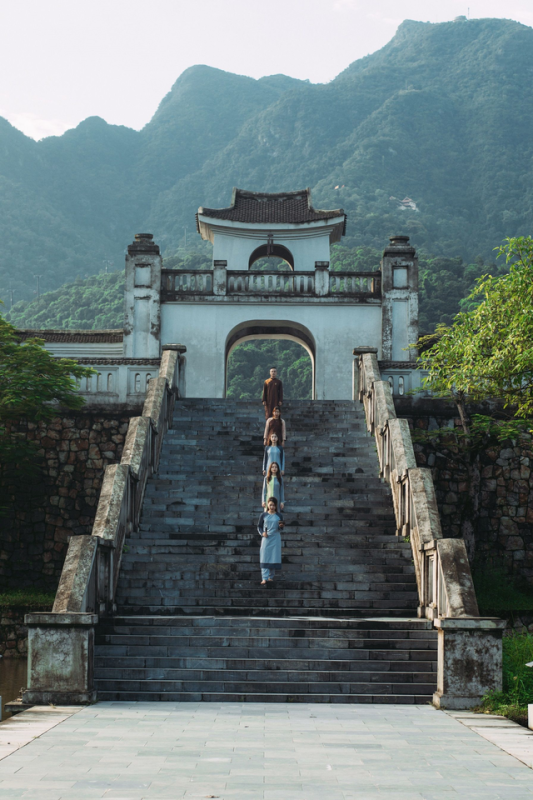 Visitors can also admire the image of Hue Quang Kim Thap – the only historical artifact remaining from the Tran Dynasty in the 13th century, along with the legacy of the Truc Lam Zen sect reproduced at Legacy Yen Tu – MGallery . This place has the royal style of the Tran and Nuong dynasties with the appearance of an ancient Vietnamese village, cleverly recreated thanks to the “magic” of the world-famous “architectural wizard” Bill Bensley, along with the talent and enthusiasm of the artisans of contemporary Vietnamese traditional craft villages. 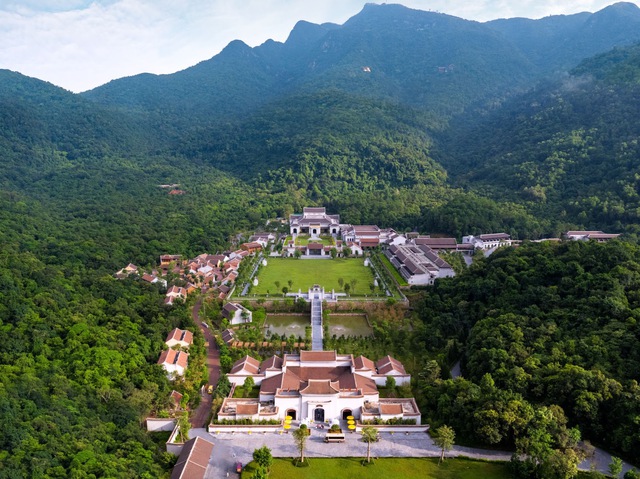 Yen Tu continues the mission of preserving and honoring the enduring values ​​of the thousand-year heritage of his ancestors and being the spiritual fulcrum of the Vietnamese nation. In addition, this place is spreading the core values ​​of the mountain to visitors through cultural institutions and human services.

Coming here, visitors are surrounded by the beautiful natural landscape of Yen Tu National Forest. At the same time, people are taken care of their Body – Mind – Mind health according to the spirit of entering the world, life and the parallel religion of Truc Lam Zen School, also inspired for creativity and artistic exchange…

Wearing a majestic and luxurious royal robe, Legacy Yen Tu is still cozy and close to every soul that loves the homeland and Vietnamese culture. The meditative peace at Legacy Yen Tu is also vividly conveyed through architectural materials, interior design, and service style. 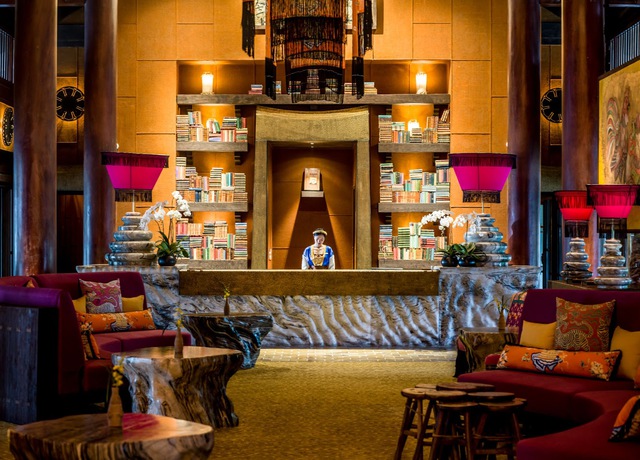 With all their enthusiasm and creativity, artisans from traditional Vietnamese craft villages have sought to restore the old crafting techniques, breathe life into each pattern, each tile, brick… creating an ancient space of Dai Viet era for visitors to enjoy and feel like they are lost in a fairyland. In that space, visitors are served in a solemn and ancient way, bringing emotions to the heart. 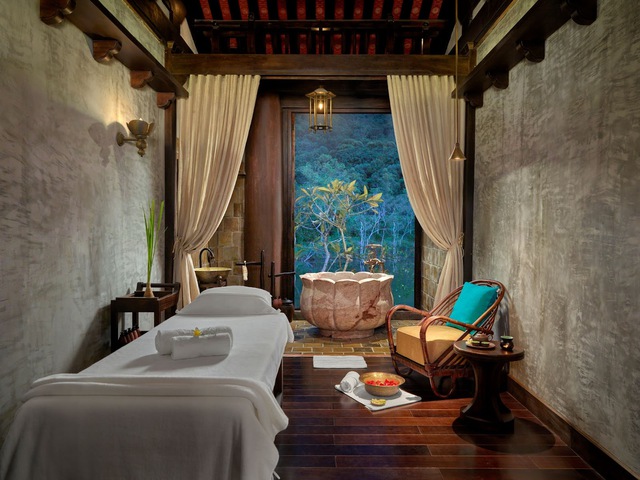 Stretching beside a cool green stream on the edge of the forest, Nuong Village is inspired by an important moment in the life of Emperor Tran Nhan Tong. When he went to Yen Tu mountain to practice, his attendants and concubines followed him but could not go with him to the mountain, so they stayed in the village that he set up at the foot of the mountain with the same name “Nuong Village”. 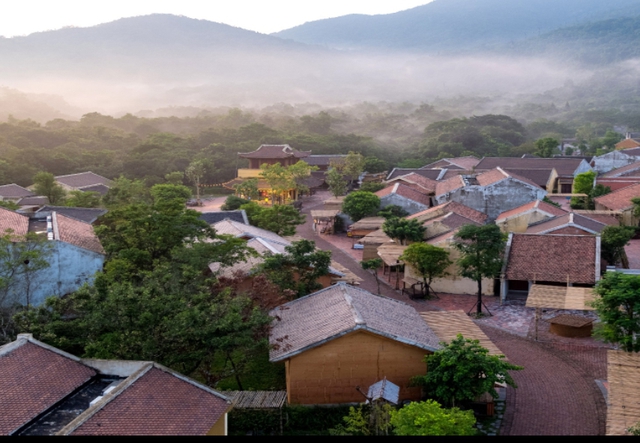 In a natural space that blends with the architecture and materials of the traditional village, the journey to experience at Nuong Yen Tu Village is reminiscent of the rich but rustic image and cultural life of his father. him hundreds of years ago.