More than 100 years ago, the Mid-Autumn Festival in Vietnam, specifically in Hanoi, was different. Were there many toys or colorful lanterns at that time?

The answer has been revealed through the precious archives of the Albert Kahn Museum in the suburb of Hauts-de-Seine, close to Paris, France. These extremely valuable color photos were taken more than a century ago by French photographer Leon Busy, who is proficient in autochrome color photography. 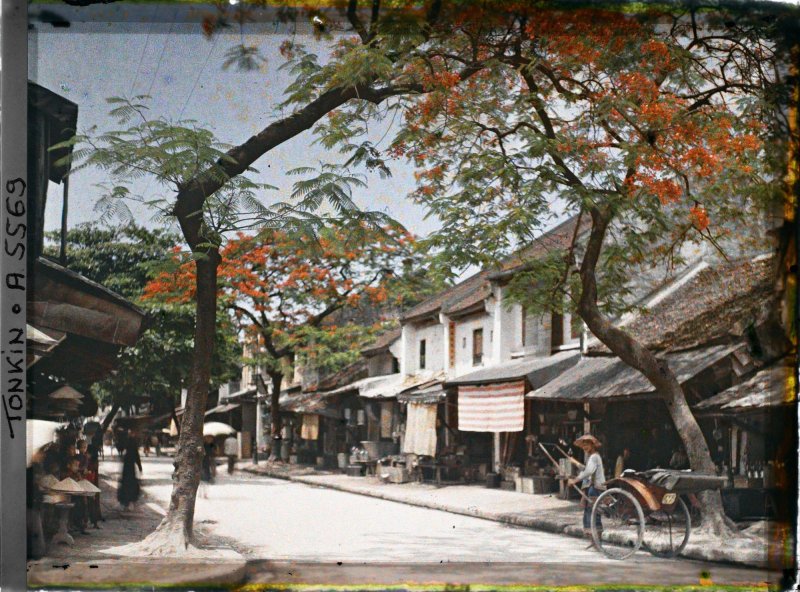 These are also the first color photographs taken of Hanoi and are currently preserved in the “Archives of the Planet” (Archives de la Planete), belonging to the Albert Kahn Museum in France. Mid-autumn toys were sold on Hang Gai Street in 1915. Many toys were meticulously made and colorful. Photo: Leon Busy/ Albert-Kahn Museum

Color photos of a paper Mid-Autumn toy shop on Hang Gai Street in 1915 surprised many people. Because these are probably the first color photos showing accuracy and high artistic level. Photographer Leon Busy looks almost like a work of art when he carefully chooses the position and posture of the characters and especially uses bright photos very skillfully. 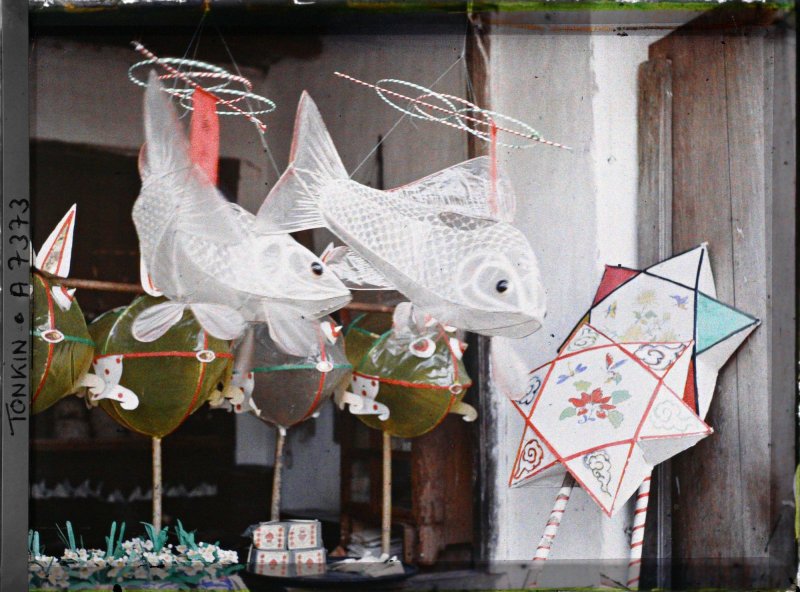 Thanks to that, people today can clearly know about the colors, scenes of life, and prominent industries of the streets of Hanoi more than 100 years ago. 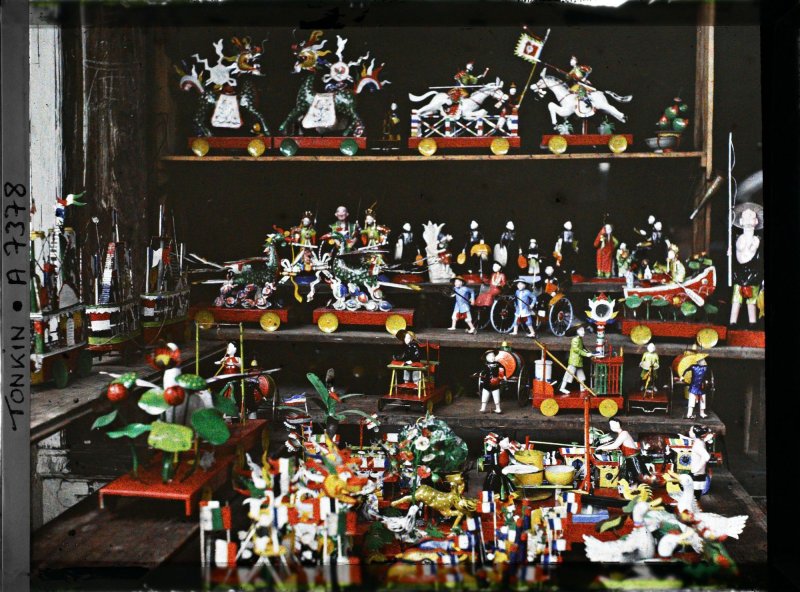 Many people were surprised to see a variety of Mid-Autumn Festival toys in 1915. Photo: Leon Busy/ Albert-Kahn Museum 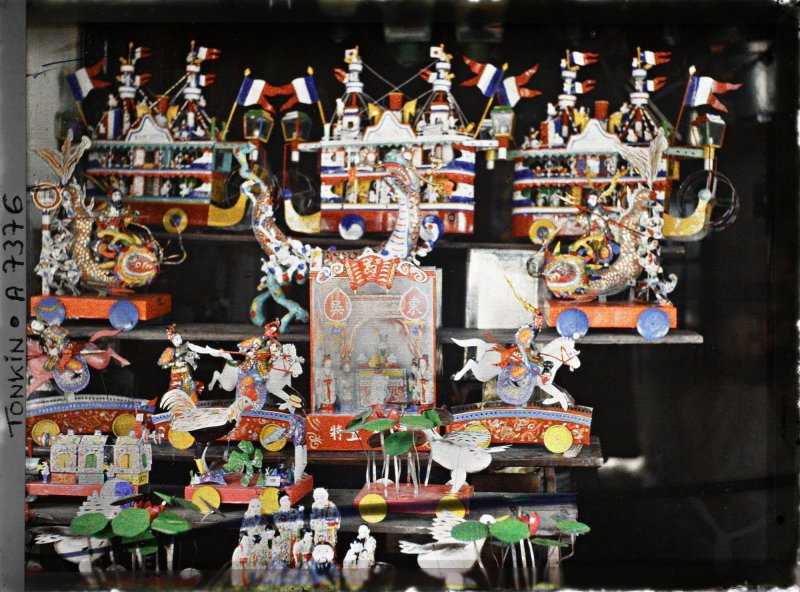 In particular, the valuable images of the old Mid-Autumn Festival space in Hanoi’s Old Quarter are now very clear and impressive. Many people, after admiring color photos more than 100 years ago, are still surprised because the Mid-Autumn Festival toys in old Hanoi were very beautiful and colorful. 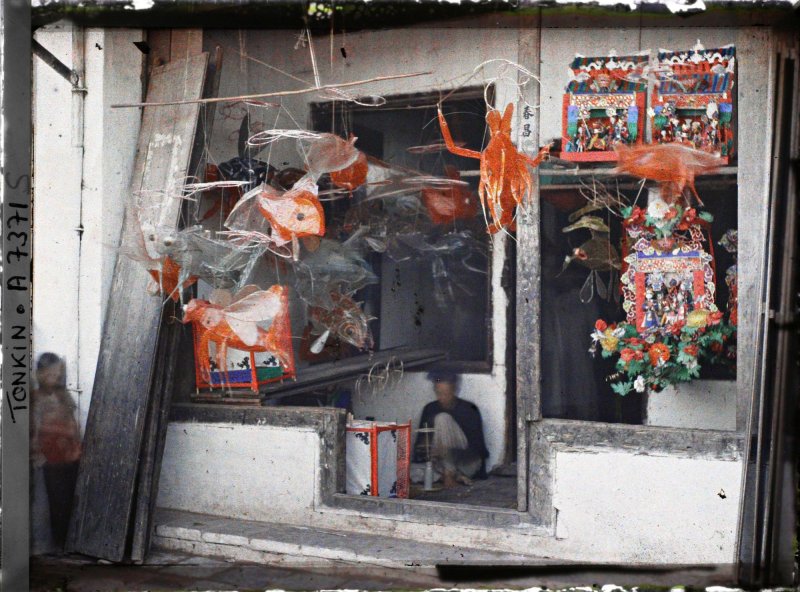 Fish lanterns with vivid colors are displayed for sale at a shop on Hang Gai Street in 1915. Photo: Leon Busy/ Albert-Kahn Museum

Although they are all handmade, there are many toys with many different shapes. All the toys are very lively and meticulously made. It turns out that the Mid-Autumn Festival atmosphere in the old streets of Hanoi is also very busy, bustling and colorful. 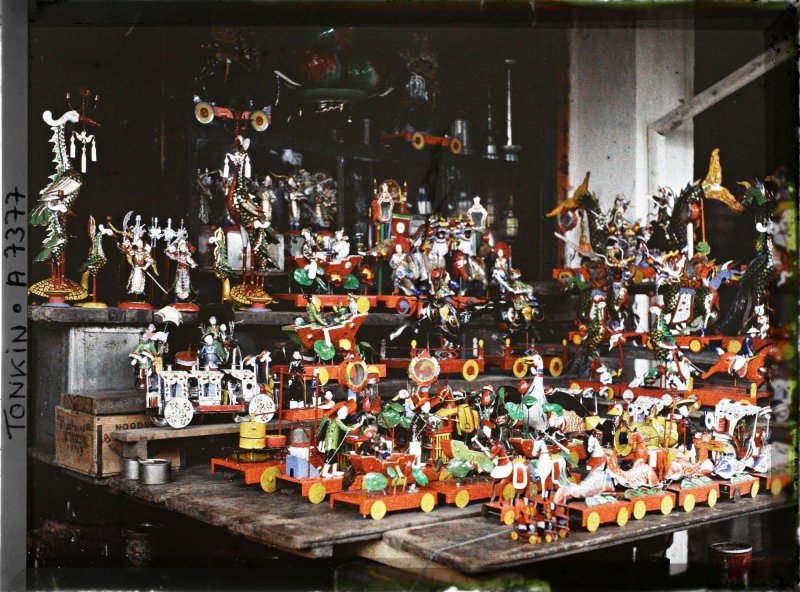 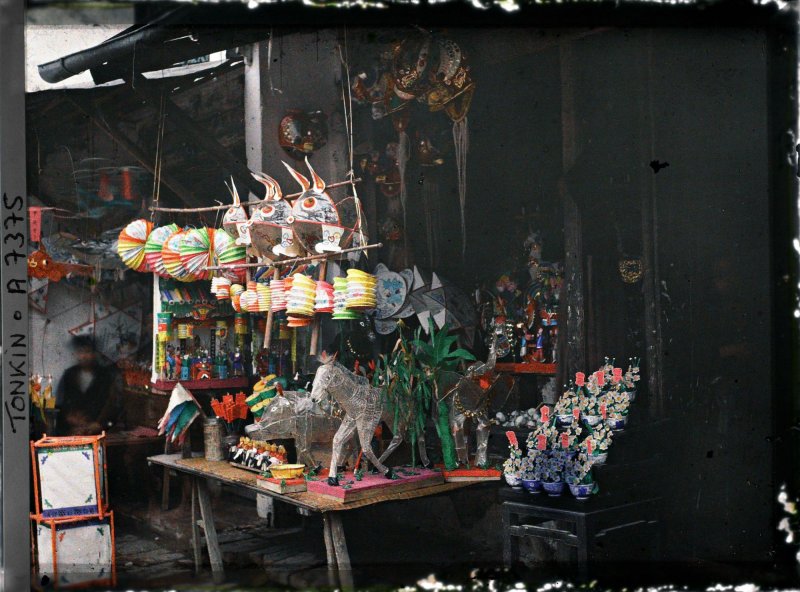 Color photos of Mid-Autumn toys on Hang Gai Street in 1915 were also displayed at the French Cultural Center, 24 Trang Tien, Hanoi in 2013. 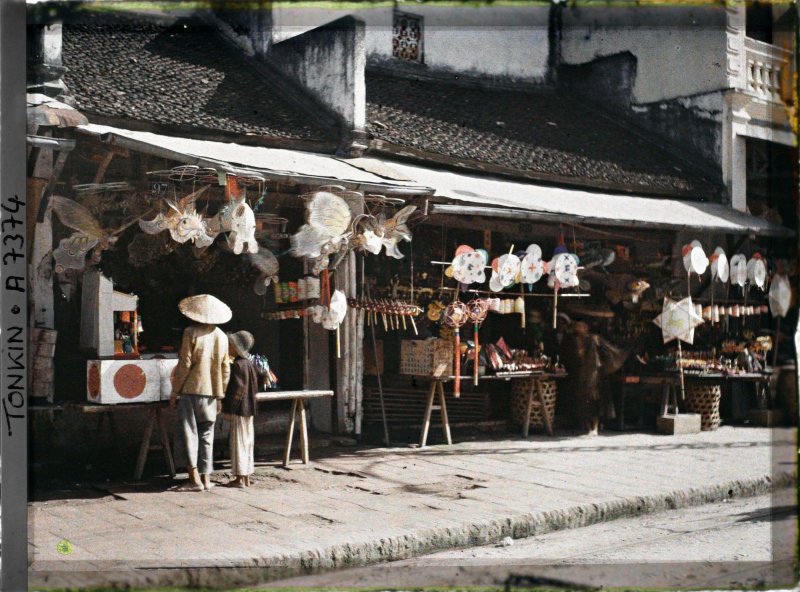 Who was the investor who took the first color photos in Hanoi?

That is Albert Kahn (1860-1940) is a wealthy French financial-banking businessman. At the age of 38, thanks to wise investments, Albert Kahn made a lot of money and founded his own bank. However, success in business was not “ideal” for Albert Kahn. He has created several funds for the community.

In particular, realizing that the invention of color photography technology could help many people admire vivid and colorful scenes, from 1909 – 1931, Mr. Albert Kahn sponsored a photography project. vast in the world. There are many photographers sent to 50 countries around the world. They are equipped with new technology in photography and videography.

In 1929, due to the economic crisis, businessman Albert Kahn broke down in business and went bankrupt in 1932. The collection of “Planetary Archives” was therefore confiscated from the public funds. Albert Kahn died in 1940, single and without an heir. 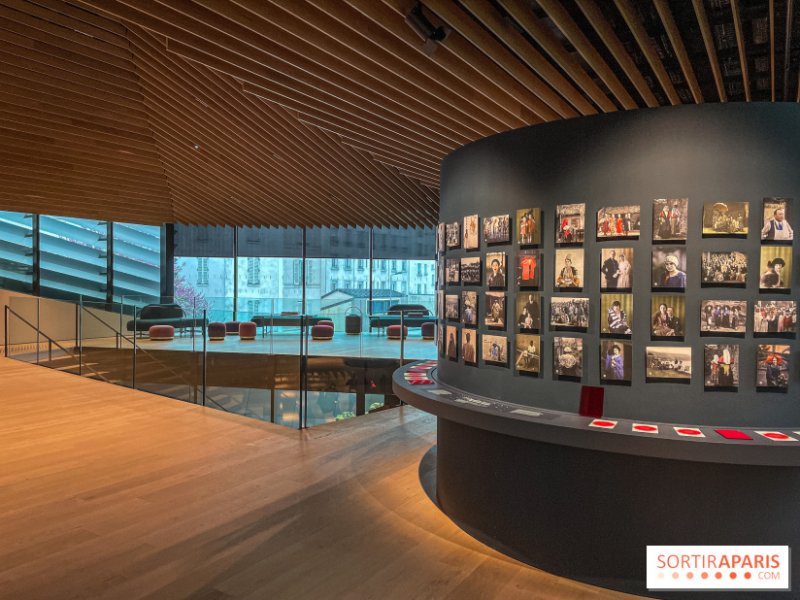 Albert Kahn Museum – where the book of the past opens

The Albert Kahn Museum in France, which holds many precious color photographs taken in many parts of the world, now bears the name of businessman Albert Kahn.

Mr. Albert Kahn is the one who bought the equipment and hired many photographers to travel to many countries around the world to take color photos to bring back to Paris for him. Photographer Leon Busy was sent to Vietnam by the Albert Kahn Museum to document the daily life of the people of North Vietnam from 1914 to 1917. 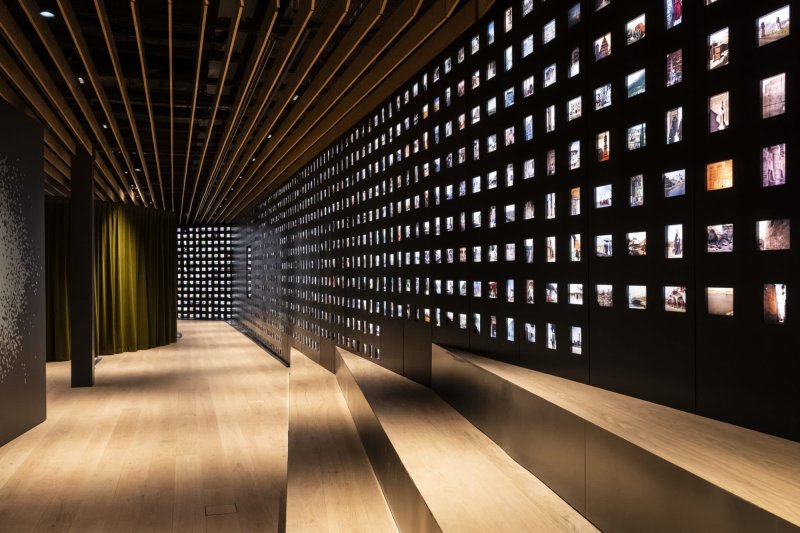 Since 2006, the Hauts-de-Seine Provincial Council and the Albert Kahn Museum have implemented a program to “digitize” their film archives, in order to facilitate public access to the entire archive. Data. 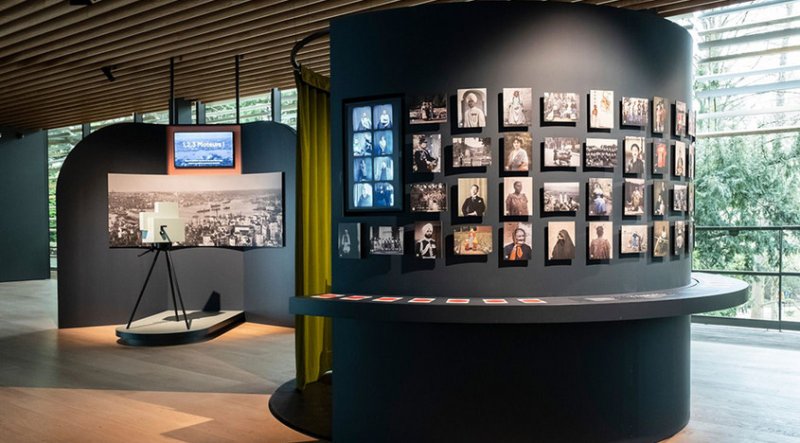 Director Nathalie Doury of the Albert Kahn Museum said a museum is a place of “image education through images”. It also offers a number of workshops for young people as well as excursions for children.

Families can also take advantage of the available room space, where they can explore the collections in a fun way.