For about a week now, the painting painted on the rolling door combined with the original confetti at the gate of Du has caused a stir on social networks. After four days of posting, that video reached more than 7 million views and shares.

“The combination of real and virtual, between the bougainvillea tree blooming on the wall and the confetti painting on the rolling door makes the picture come to life. Some passersby look at it and think it’s a house without a house”, Duc Du, 28 age, hometown Dak Lak said.

Duc Du loved painting from a young age but was not supported by his family, so he did not follow the artistic path. In 2012, he went to Hanoi to study design, but a year later dropped out of school in Ho Chi Minh City to pursue his passion for 3D painting. “At that time, I could practice drawing all day without getting tired because I identified art as my passion and started to conquer it,” he shared.

Having never attended a painting school, it took Du two years to get used to it. At that time, he was self-studying online while reading more specialized books, participating in many art groups to connect his predecessors to gain more experience. 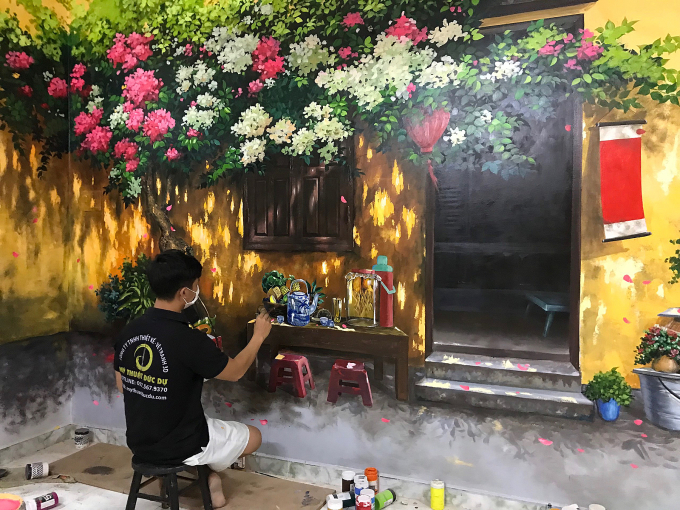 Duc Du is working on a work for a restaurant in District 5, Ho Chi Minh City, on the afternoon of August 4. Photo: Dong Hoang.

In 2014, once sitting at a cafe to draw and look for documents, the owner came to ask questions and knew what passion Du was pursuing. He asked the young man from Dak Lak to paint a picture of his hometown on the wall of the shop. “At that time, I simply thought that I liked it, so I accepted and started working the next day,” Du recalled.

After a day of completion, Du offered to donate the painting, but the owner still sent a red envelope of 500,000 VND with encouragement: “The picture is not impressive, but I always support your passion, don’t give up”. Later, Du and the former innkeeper became close friends. “From the first picture, I persevered in practicing and a year later I started to have visitors,” he said.

The guy said, a complete 3D mural has to go through many stages such as: coming up with design ideas, dealing with the current state of the wall, rendering, coloring, and coating with protective glue. Color, perspective and composition are important factors, there must be depth, clarity, and standard proportions for the picture to come to life. The construction time for a painting is usually 3-5 days, the price ranges from 500,000 to 2.5 million VND per square meter, depending on the needs of the customer.

Claiming to be a perfectionist, Du always sets the motto “if you want to be right, you have to be right from the beginning”, so just making a small mistake, he doesn’t mind spending time redrawing from scratch until he likes it.

“I know nothing is perfect, but I still try my best to make the picture as perfect as possible. I want everyone to feel my meticulousness and enthusiasm in it”, Mr. Du shared. From 3D painting on the wall, he created more paintings on the rolling door and was well received by many guests. 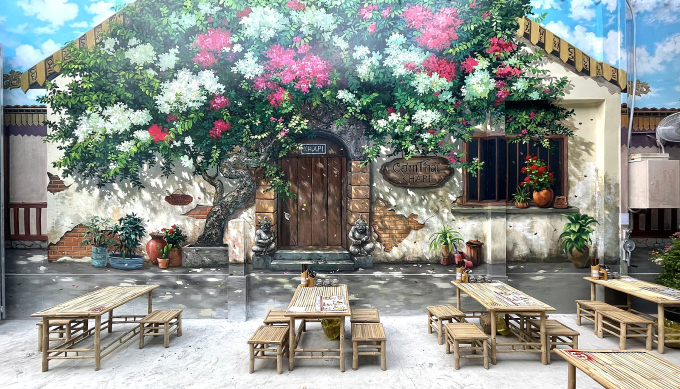 The painting of confetti on the wall of 60 m2 Mr. Du has just painted for Ms. Thu (District 7) on July 28. Photo: Character provided.

At the end of 2021, Trinh Thi Huong and her husband, 56, heard about Du’s reputation, so they went from Binh Duong to order three paintings. Duc Du was quite surprised to learn that his grandparents had to save for many years and wanted to have a dream house when they were old.

The next day, Du’s group went to Bau Bang to perform. Because of the close of Tet, the group tries to work in the evening to keep up with the schedule. “The love of my family makes me want to draw forever and want it to be as beautiful as possible,” he said.

After a week, looking at the finished painting, Mrs. Huong exclaimed: “It’s my lifelong dream, my dear, to have a beautiful house and beautiful paintings, I am very satisfied”. She said that the three paintings cost nearly 100 million dong, but she was still happy because she drew them right. Everyone who comes to the house also compliments. She also returned and posted on social networks to share with friends.

“There are times when the drawing is not satisfactory, they erase and redraw it. Very meticulous, only each leaf takes care of the whole day to finish. Sometimes, I ask for more here, less there, and the children still have fun afternoon. follow,” Huong said.

Ms. Nguyen Anh Thu living in District 7 has just received a 3D sketch of confetti on a 60 m2-wide wall made by Mr. Du on July 28. She was very surprised when his team finished in just one week. “Neighbors gathered to compliment and ask to take pictures, guests were all satisfied and asked about the author of the painting. There were also many groups who painted for my shop before, but Du’s painting made me the most satisfied”, Ms. Thu said.

Mr. Kieu Cong Huy, 28 years old, from Dong Nai, has quit his job with an income of more than ten million dong per month to follow Du for nearly three years. Huy always considers Du as a teacher who paved the way for him to find the right passion.

“Working together on many 3D works, I realize that he is a very disciplined, dedicated and meticulous person in every stroke. Sometimes it is normal for brothers to be passionate about drawing to skip meals,” Huy said.

Besides pursuing art, Du and other painting-loving friends have been implementing many projects towards the community and protecting the environment across the country. Prominent projects can be mentioned such as the mural village of An Binh island (Ly Son, Quang Ngai), painting to protect the environment at the green Vietnam sea program at Cua Lo (Nghe An), the project of “blue mural village”. Canh Duong painting” (Quang Binh), the first 4D Hoi An Ancient Town mural in Vietnam in Binh Duong… Nine years of work, the number of paintings he can not remember all. Predictably, every time he received a compliment, he was extremely proud, because his efforts and efforts were well received by everyone. But it is also a concern that urges the artist to try harder.

He thinks, just understands what he likes and give love to it, determined to pursue it until the end, the sweet fruit will come. In the future, Duc Du always wants to spread his inspiration and passion to the community, especially young people. “I will spend my free time teaching jobs and creating opportunities for brothers with the same passion,” he said.