Van Thuy Tu Temple is located on Ngu Ong Street, in Duc Thang Ward, City. Phan Thiet. To come here, visitors can go from Co.opmart supermarket to the end of Tran Hung Dao bridge, there will be a directional board. Turn to Ngu Ong Street and continue for another 500m to reach the gate of the thousand. 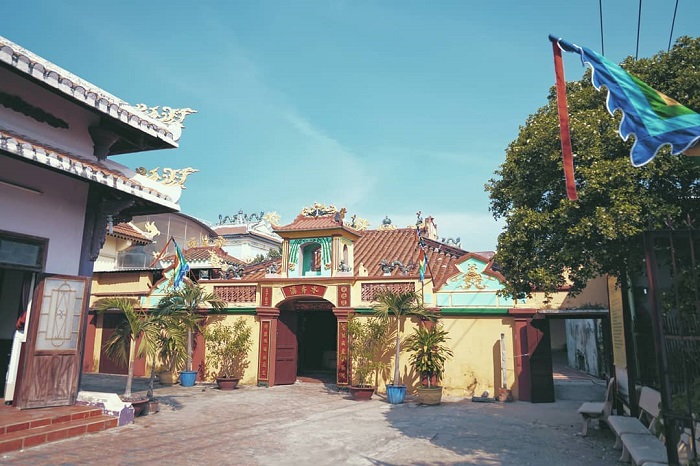 When coming here, you can not only admire the ancient beauty of hundreds of years but also learn about the beliefs, customs and habits of the fishermen in the fishing village here. 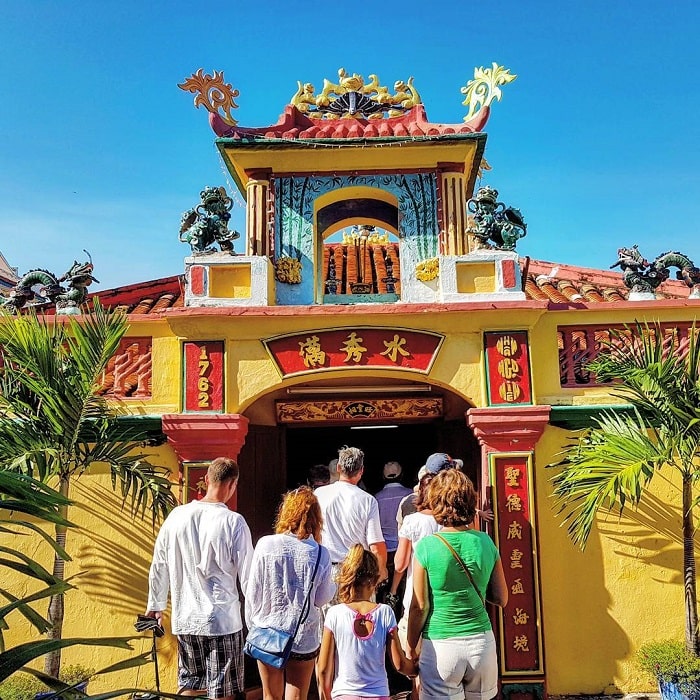 Tourists come to visit thousands of
>See more: Falling in love with the beauty of Quao River Lake in Binh Thuan

According to historical records, Dinh Van Thuy Tu was built by fishermen in Thuy Tu village in 1762 to worship Ca Ong. When it was just built, it was just a wooden house with thatched roof. After that, it was embellished more completely with a package roof, brick wall with an area of ​​​​500 m2. 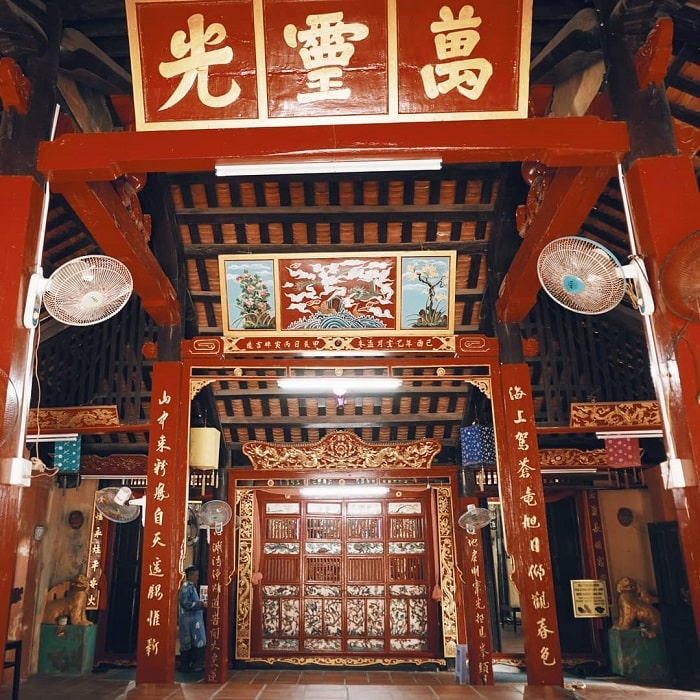 Although it has been around for a long time, this place still retains most of its original beauty. Van has a style of design, decoration and worship similar to communal houses. Therefore, many people mistakenly think that this is Dinh Van Thuy Tu. In 1996, Dinh Van Thuy Tu was recognized by the State as a national historical relic. From the time of construction until now, the thousand houses a large number of about 600 sets of whales and many other species of the same family. About half of them have a history of up to 100 – 150 years. The big skeletons will be worshiped by fishermen. 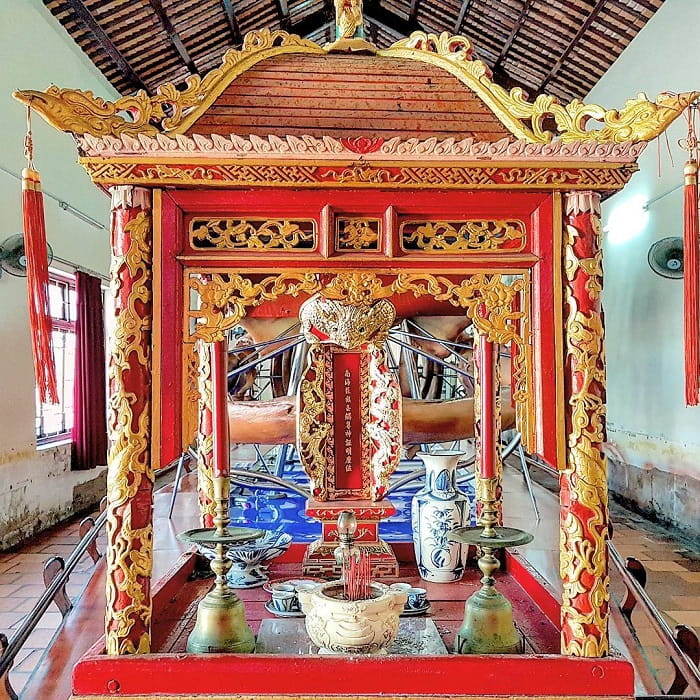 The worshiping area in the thousand

In addition, there are many Han – Nom cultural heritages in the village that are closely related to the marine profession. That is reflected in the worshiping statues, altars, interlocking objects and inscriptions in Dai Hong Chung.

Not only that, Van Thuy Tu Palace is also recognized as an ancient relic once ordained of the great Nguyen Dynasty kings. During the feudal war, the generals of the Nguyen Dynasty were repeatedly rescued by whales at sea. Currently, there are about 24 ordinations of the kings: Tu Duc, Thieu Tri, Duy Tan, Dong Khanh, Khai Dinh, Duy Tan. In particular, King Thieu Tri bestowed 10 colors of body, which is rare compared to other relics in Vietnam. 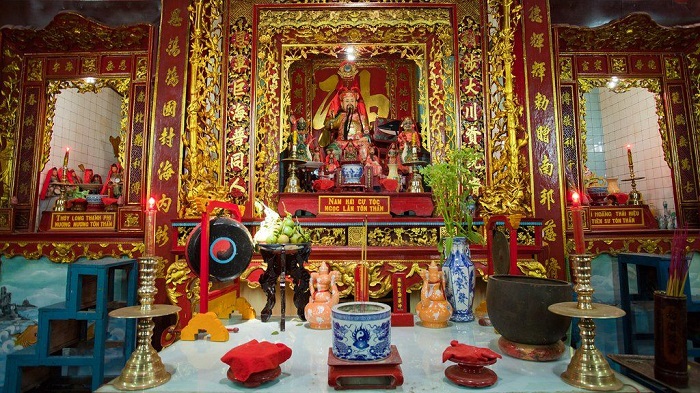 Dinh Van Thuy Tu Binh Thuan  has a “four-pillar” design style, which is reflected in the trusses, because, columns all start from the top of the four pillars. In the ten thousand used good wood is carefully assembled and carved very delicately.

The campus outside Van Thuy Tu

It has a very large campus with an ancient style. The highlight of the campus is Ngoc Lan Holy Land. This is the place with the largest area on the campus and is used to bury Ong fish every time he drifts in from the sea. 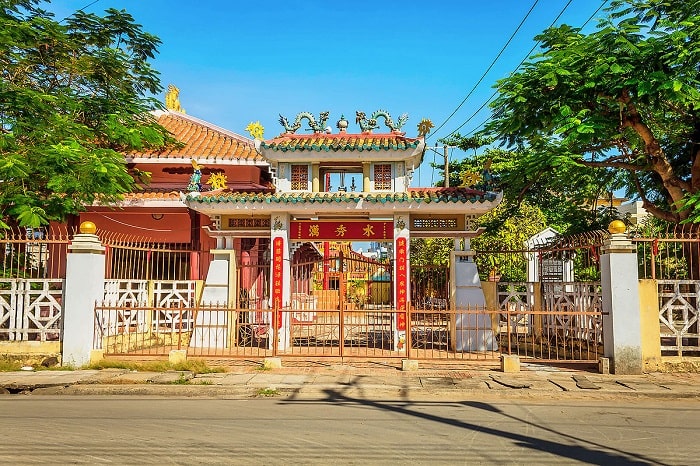 The outer space of Van

Stepping in from the outside, in the middle of the thousand is a place to worship with Nam Hai, the giant Ngoc Lan Ton god (Mr. Nam Hai). The left side worships Thuy Long Thanh consort Ton Than (goddess of water). On the right is the worship of the Emperor Thai with the title Tien Su Ton Than (the ancestor listens to agriculture and fishery). The area behind is a place to worship those who have merit in exploring, building villages, establishing thousands. In addition, next to the main hall, there is a shrine to worship Quan Thanh. 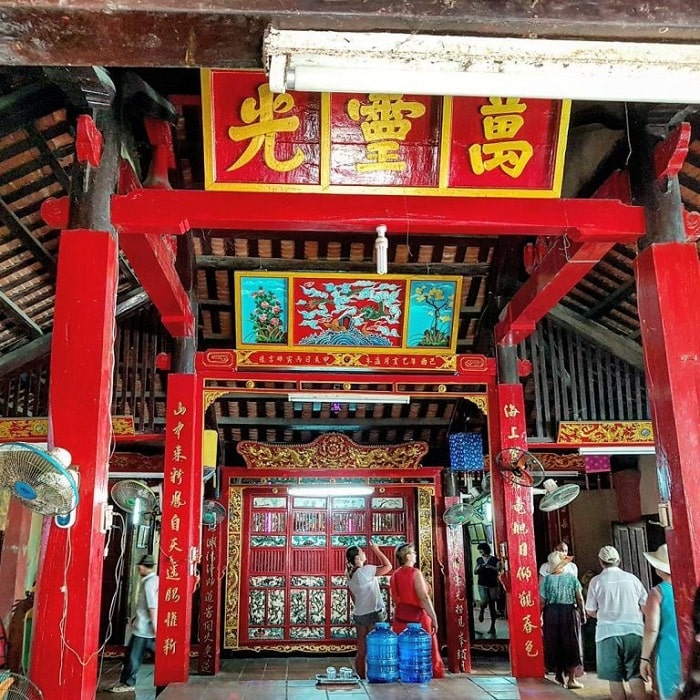 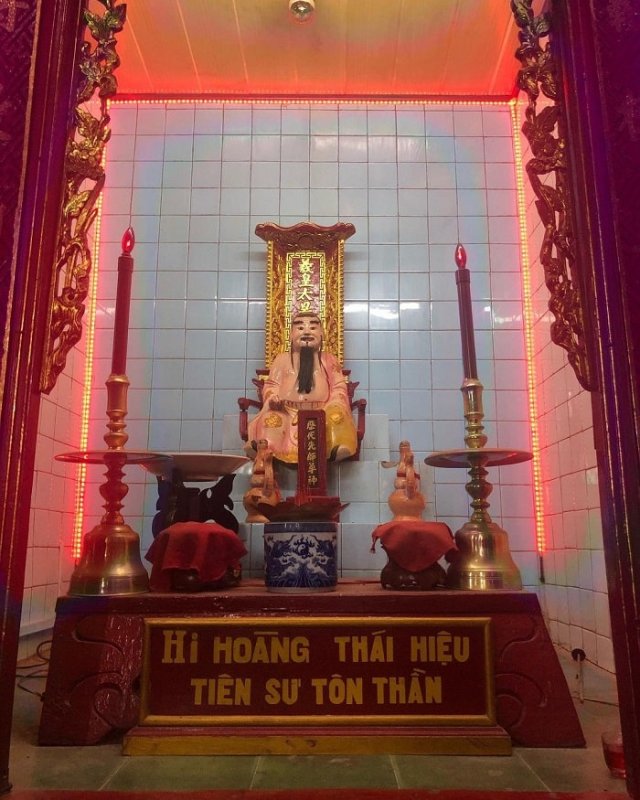 Altar of Thai Emperor with title of Tien Master Ton Than
> See more: ‘Pocket’ the most detailed Binh Thuan travel experience in 2022

Dinh Van Thuy Tu is not only the largest and oldest temple in Binh Thuan, but it is also known for having the largest Ca Ong skeleton in Southeast Asia. Folk legend has it that, after being built, Dinh Van had a very large Ca Ong that washed up on the beach in front of the Palace. The fishermen in the area were mobilized together to be able to bring Mr. 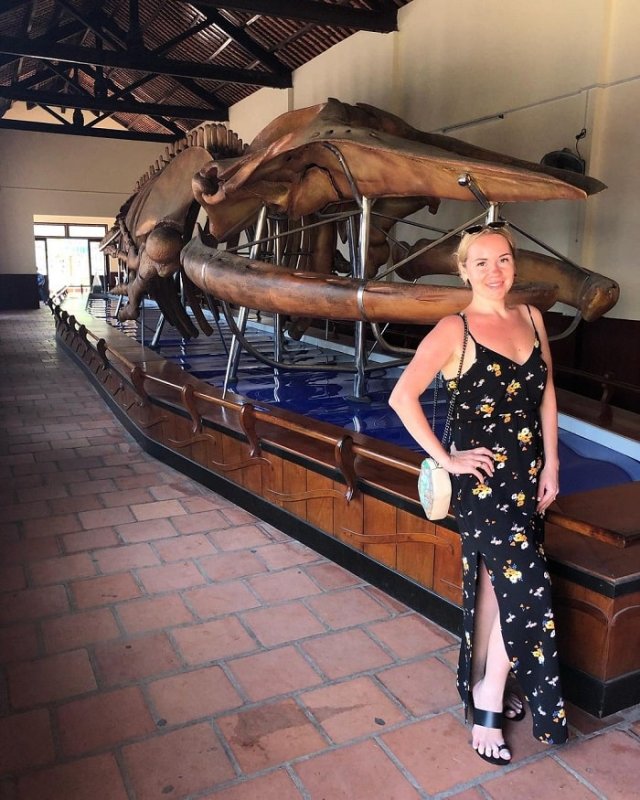 The skeleton of Ca Ong is preserved almost intact with a weight of 65 tons, a length of 22m and is identified as a grayback whale. Currently, this skeleton has a history of up to 100 years. 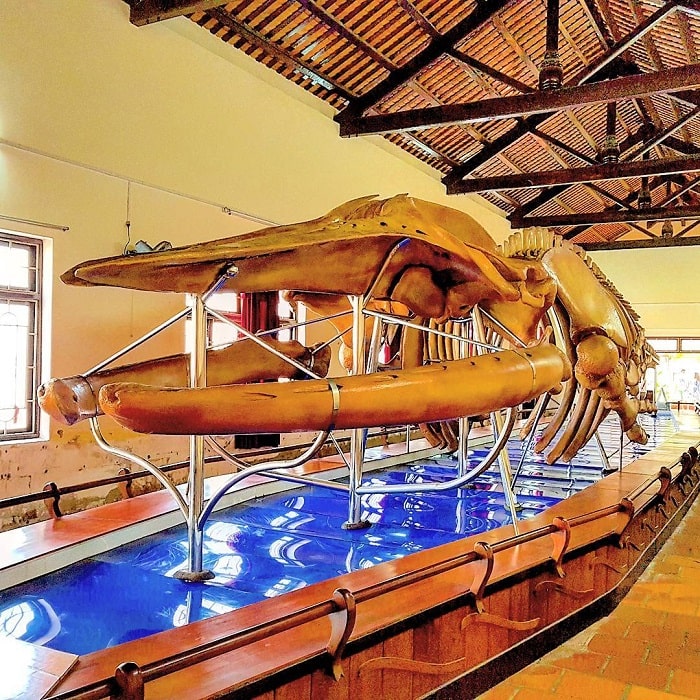 The skeleton weighs 65 tons and is 22 meters long

Learn about the custom of worshiping Whale

Going to the Palace of Van Thuy Tu Binh Thuan , visitors also have the opportunity to learn about the custom of worshiping Ca Ong and festivals and rituals associated with fishery beliefs such as: the ceremony of the jade statue of Ca Ong put into worship. The small man is after 24 months, the big man is 36 months); the burial ceremony of Ca Ong’s body when it was washed up in the sea before ten thousand; the spring festival takes place on February 20-12; the first fishing festival takes place on April 20-21; Cau Ngu festival takes place from June 19-22; The festival of Cau Ngu to fulfill the Southern fish season takes place from August 20 to 21 of the lunar calendar.

These festivals and rituals have quickly become a common festival of Phan Thiet’s marine profession, attracting a large number of fishermen. This is also an opportunity to show the people’s respect for the god Nam Hai and wish him to always bless and maintain the fishing industry, always have luck, peace, fish and shrimp are full of boats. 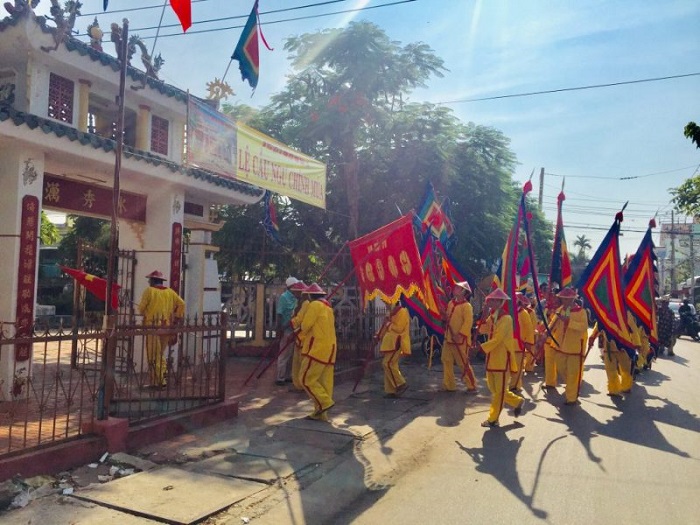 Van Thuy Tu Palace is not only a place to worship the ancestors of the fishing industry, but also stores many valuable artifacts related to the history and development of fishing residents. If you have the opportunity to come to Phan Thiet, Binh Thuan, come here to see firsthand the largest sized Ca Ong skeleton in Southeast Asia.

Today, 17:29
After 5 consecutive reductions, the home gasoline worth might flip to rise once more

Today, 17:19
How MAXHUB built its channel through a genuine commitment to the ANZ market

Today, 17:12
POLY English offers scholarships up to 40% to welcome students back to school