Home / Travel
U60 grandparents ride motorbikes through Vietnam with their children and grandchildren
tranthuy02 29-07-2022, 09:59

Mr. Thanh and Mrs. Chinh traveled with their children and grandchildren on a 20-day trip across Vietnam, with a budget of about 100 million VND.

With the tradition of always traveling together, the family of six uses three motorbikes, one for Mr. Thanh – Mrs. Chinh, one for Loc and one for his daughter’s family. They departed from Ho Chi Minh City, stopped at a series of famous destinations such as Nha Trang, Phu Yen, Hoi An, Quang Binh, Ninh Binh, Ha Giang, Sapa, and then boarded the train from Hanoi to Ho Chi Minh City. The whole journey took place in 20 days, from July 2 to 22, with a distance of 3,450 km, with a total cost of about 100 million VND. 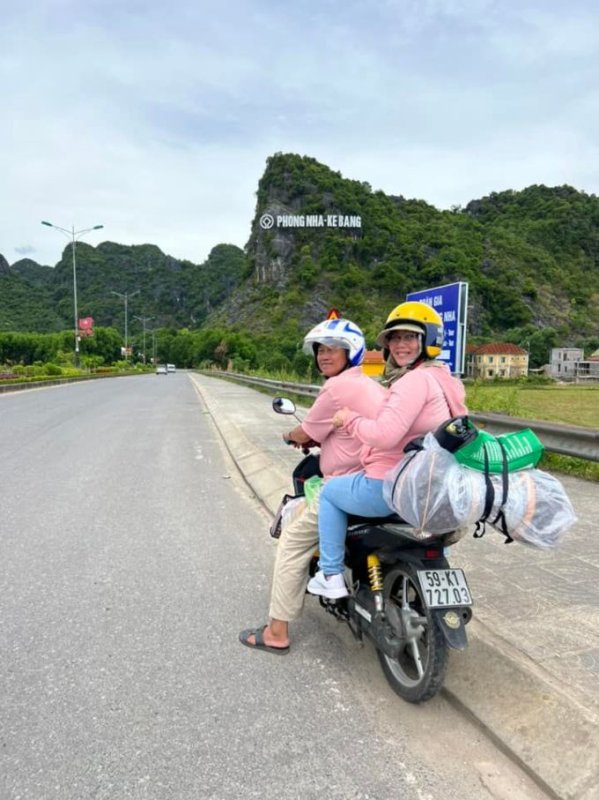 Mr. Thanh and his wife on the road in Quang Binh.

The trip of a lifetime has been cherished by Mr. Thanh and Mrs. Chinh for a long time, but only now have the opportunity to do it. The two grandparents have been in the food business, just started moving in the past 5 years, and are especially interested in motorbike journeys. Before this trip across Vietnam, they used to ride an “iron horse” roaming around the western provinces, going to Da Lat “like a meal”, but the furthest was only to Quy Nhon. “Each person has their own thoughts, but for us, riding a motorbike is very enjoyable, very comfortable. Wherever you want to eat, you can rest,” Ms. Chinh said.

When he learned about the dream of the two grandparents, the son intervened because he was afraid of dangerous roads, but then he was inspired by his own father. “I didn’t want to go at first because the road was too far, too dangerous, and it was still hurricane season. But when I talked back, my father was sad. The inspiration to go on the road was more inspired by my father. Usually, young people encourage the elderly to get older. , but this is the opposite, my father encouraged me to go,” Loc shared. Seeing her husband’s determination, Mrs. Chinh urged Loc to follow his father’s will, reminding her son “lest he regrets it later”.

The decision to depart was made only a week before departure time, no return date was set. Because the merchant sells food, Ms. Chinh has to find a way to handle foods such as rice, fish sauce, salt, give or keep apart. The clothes and furniture that grandparents bring are simple, not fussy. Mr. Thanh didn’t even bring any shoes because he was used to wearing sandals.

Before the day of departure, their daily-use car was taken for maintenance, fitted with a cargo rack to tie things, and also a place for Mrs. Chinh to lean back when tired. Loc bought 3 more walkie-talkies for each car for easy communication, in case the phone signal is lost in places.

On the first day of being fit, they traveled more than 400 km, but the average trip was only 200 km per day. They got wet on the first day, but were lucky to have cool weather in most destinations after that. They mostly follow Highway 1, sometimes turning to coastal roads to enjoy the scenery.

Ha Giang is the place that left the most impression on Mr. Thanh and Mrs. Chinh. “The most profound impression is Ha Giang. Beautiful scenery, friendly people. I look at mountain people with my own people. There is no distance. Passes and mountains are very majestic”, Ms. Chinh expressed. 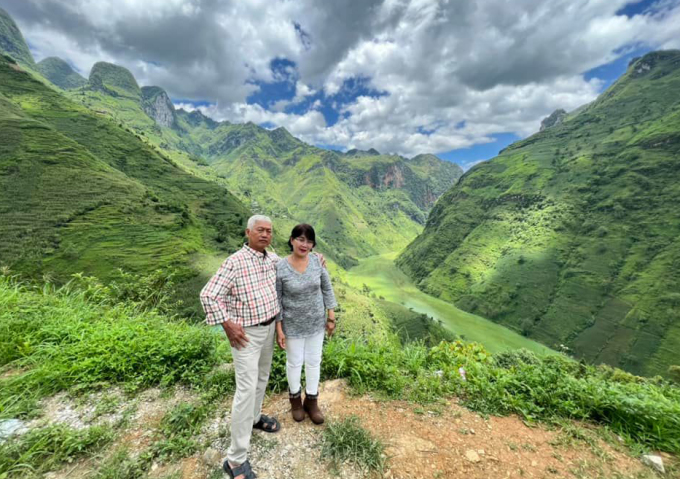 Ha Giang was one of the two places where they stayed the longest, with two nights in Dong Van and two nights in the Pa Vi community cultural tourism village (Meo Vac). The couple enjoyed their time sailing on the Nho Que River, even though they had to go through the “most difficult part of the whole trip” trekking to get down to the river. In addition, the highland children also left the U60 couple with many emotions. “I feel so sorry, there is a can of water that we all drink together, and there are no clothes to wear. It does not know me but sees me passing, it raises its hand to say hello, some people hide out of fear. I give them candy. he is very happy,” said Mrs. Chinh.

In terms of food, they have the opportunity to taste local delicacies such as Ninh Binh goat, Hue roasted pork soup, Nghe An cude candy, Hanoi bun cha, Ha Giang ham and pork, and Sa Pa black chicken. Both husband and wife cannot eat thang co (horse meat) and buffalo meat because it is related to worshiping. Commenting on regional cuisine, Mr. Thanh said: “Before, I thought it was a mistake to come from Nghe An to eat salty food, but now I see that the dishes here are lighter than in the South”. In addition to specialty dishes, Mr. Thanh often chooses rolls, fried rice, fried pho, and fried noodles.

In the afternoon, they plan to take a plane and send the car to the train. However, due to close booking, air tickets are sold out. This caused the whole family to stay in Hanoi longer than expected to wait for the train schedule. However, looking back on the whole journey, luck was with them. Both times they had car problems, they were near a repair shop. Once they lost their way but only went wrong about 1 km. In addition, the members of the delegation did not have any health problems.

Always supporting and trusting her husband, but Mrs. Chinh’s mood is not always open. She recalls feeling scared when she witnessed a car accident on the way to Ha Giang with her own eyes, when circling on deep cliffs, when being crushed by a container truck on the highway, when the car was thrown away because of the wind. blowing hard on Bau Trang street (Phan Thiet, Binh Thuan), or driving through the day when hungry because I can’t find a place to have lunch.

“The couple also talked about this and that in the car, but safety must be ensured first. I always whispered to him that I had to concentrate. Say a few sentences, not much,” Ms. Chinh laughed. . Mr. Thanh admits it is inevitable to feel sleepy on the road, but everything will be fine with a cup of coffee or an afternoon nap. Chinh believes that risks are always present, no matter how well prepared, a little luck is needed. 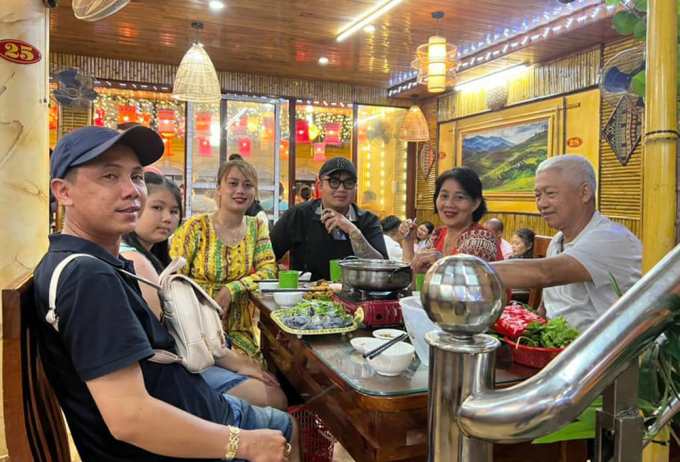 Because they are used to riding motorbikes, they are not tired or sore after the trip. At this age, their general health is ideal, not having to take medicine every day. Ms. Chinh believes that regular work and moderate living have helped them keep their health. They usually go to bed at 8 o’clock at night, Mr. Thanh gets up at 2 o’clock to prepare the goods, then at 4 o’clock Mrs. Chinh stands to sell.

The couple’s upcoming plan is to conquer places that have not been in the North such as Cao Bang, Lai Chau, Dien Bien, and Mu Cang Chai. Chinh especially wants to go to Lan Ha Bay. Their upcoming journey, although not yet set a specific date, will definitely still be by motorbike. “The older I get, my health deteriorates very quickly. Now I’m sitting here, but I don’t know if I can still sit here tomorrow. Life is impermanent, we just want to be healthy,” Ms. Chinh expressed.