DA NANG – Many people spend hundreds of millions of dong and monthly expenses to own saltwater aquariums like a miniature ocean.

In the premises of a restaurant on 3/2 street, Thuan Phuoc Ward, Hai Chau district, diners are attracted by an aquarium 1.2 m high, 3.7 m wide, with species of corals, or sea anemones. Reaching out tentacles to catch the plankton. Many species of fish roam about feeding in coral-like reefs on the seafloor.

This is the largest saltwater aquarium in Da Nang, with a total investment of more than 800 million VND. The owner of the tank, Mr. Nguyen Truong Tai, 36 years old, said that with a lifespan of 5 years, the tank has basically stabilized the ecosystem for organisms to live and develop. Every month he spends about 30 million VND to maintain the operation of the tank.

“Saltwater aquatics are rich in types and colors. Corals that grow naturally, and fish that grow up every day are the inspiration for me to invest in this hobby”, Mr. Tai said. It took about 9 months after designing the lake, changing the seawater regularly (a week changing 1/10 of the water in the tank), the new balance of Mr. Tai’s tank was almost similar to the marine environment, from which fish and corals grow. can develop. 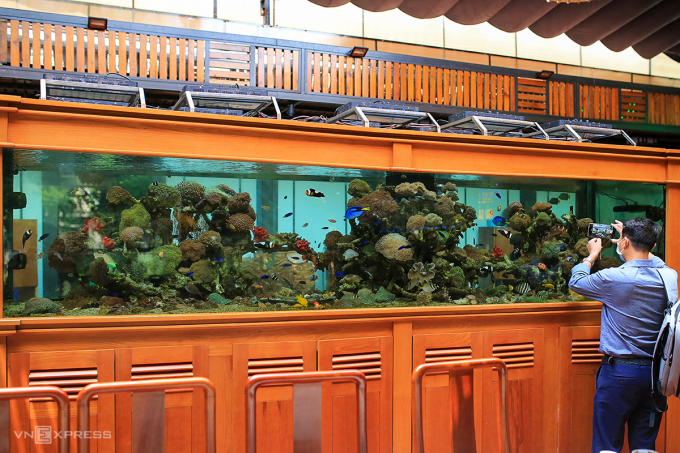 Animal “bringing the sea to shore” in Da Nang appeared nearly ten years ago, but the number of members is still small. In the past two years, many passionate people have boldly “spent their wallets”, so the number of members has increased to more than 1,000. Players also form associations and groups to share experiences and buy and sell saltwater aquatic products.

Mr. Nguyen Viet Thiet, 31 years old, owner of a saltwater aquarium at a fish noodle shop on Nguyen Chi Thanh Street (Hai Chau 1 ward, Hai Chau district) has been passionate about this hobby for the past 8 years. His aquarium is 2m3 wide, raising a variety of soft corals, marine fish and two “doctor” shrimp specializing in parasites for fish.

To play aquarists specializing in corals and marine fish, according to Mr. Thiet, in addition to the thick glass tank, carefully glued, it also needs a chiller with an average temperature of 25-26 degrees Celsius; specialized lights above, turn on 8-10 hours a day, ensuring enough light like that of the natural sun; Skimmer foam separator and streamer for water like waves flowing on the seabed. Thiet’s fish tank installed 70 million VND, plus coral and fish about 130 million VND more. He changes the water once a week, which is deep seawater that is sucked from offshore, someone transports it by tank truck to directly replace the tank owners at a cost of 300,000-500,000 VND/time.

Mr. Thiet chose to raise soft corals because it was easy to play. Hard corals need more expensive machinery to create a standard ecosystem. Each year, nutrient-rich corals can grow about 1-2 cm. If you buy fish imported from abroad, it will take time to tame. The fishes are also habituated, every time the owner comes to the edge of the tank, the fishes swim along to be fed.

Pets also face many risks. Mr. Tai said that there was a problem twice when the tank temperature changed suddenly and there was an imbalance of substances in the tank, leading to the mass death of fish and corals, and nearly 200 million VND in damage. Then he paid more attention to taking care of the tank, absolutely not letting the algae and the temperature change abnormally.

Even though Mr. Thiet spent 15 million VND to buy the queenfish from Japan, he did not know how to tame it, so the first fish died. “I’m so sorry, so I wrapped the fish in a nylon bag and put it in the freezer to embalm the body. Raised the second queen to live,” Mr. Thiet said.

Also because of the elaborate and meticulous hobby, in recent years, aquarium owners have often hired professional services to take care of and periodically checked by machine. Mr. Trinh Quoc Hoang, 26 years old, an employee of Ylang Aquarium, said that the most difficult part of saltwater aquatic life is the temperature and balance of the alkalinity of KH, minerals of calcium, magnesium, and iodine… as standard as in the ocean floor.

Natural seawater for aquaculture must be taken about 10 km from the shore, 50 m deep, with a separate pipeline system for clean and sufficient salinity. The temperature is about 25 to 26 degrees Celsius, so it is necessary to have a cooler. These indicators are usually checked once a week. As for those who have played for a long time, just looking at the reef can tell if their lake is stable or not.

“As simple as if you look at the glass surface for 2-3 days with moss clinging to it, it’s because the lake is too clean, creating conditions for bacteria and algae to multiply. It’s not good if the lake is too clean, but must ensure a balance of substances.” Mr. Hoang said, even though they live together, fish and corals have their own food sources (fish usually eat shrimp and flour; corals mainly eat plankton). 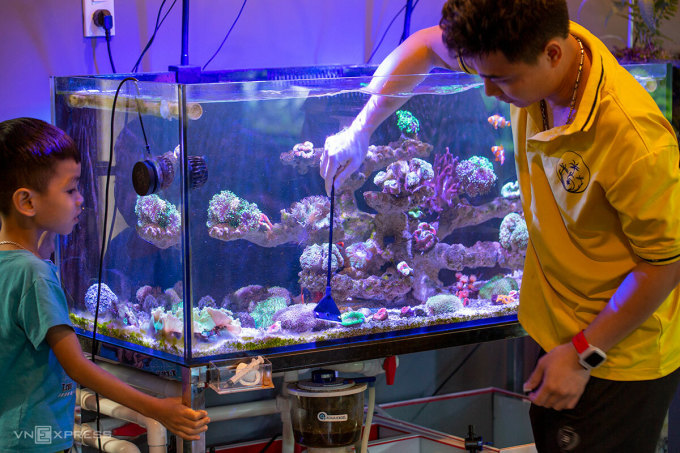 Corals are usually obtained from Quy Nhon (Binh Dinh) and Nha Trang (Khanh Hoa), in a number of barns that are allowed to be exploited. Currently, only fish in Vietnam are licensed for Nemo and tomato varieties, raised in Nha Trang. However, thanks to the existing ordering method, players can buy their own imports from abroad.

Although the number of players has increased significantly, according to Mr. Hoang, there are currently only 5 beautiful and durable saltwater aquariums in Da Nang, including Mr. Tai and Mr. Thiet’s tanks. Da Nang players have the advantage of an available supply of seawater, unlike in Hanoi and Ho Chi Minh City, they mainly have to use salt water, which is more expensive and elaborate.

Comparing freshwater and saltwater aquatic life, Mr. Hoang said this is the contrast between static and dynamic. Freshwater aquatic is more inclined to play with plants, so it is usually quiet, the water flows gently, and looking at the lake will feel peaceful (the fish swim and the trees standstill). As for saltwater aquatic life, it must be alive with the image of corals, anemones, and fish living and developing like in the ocean.