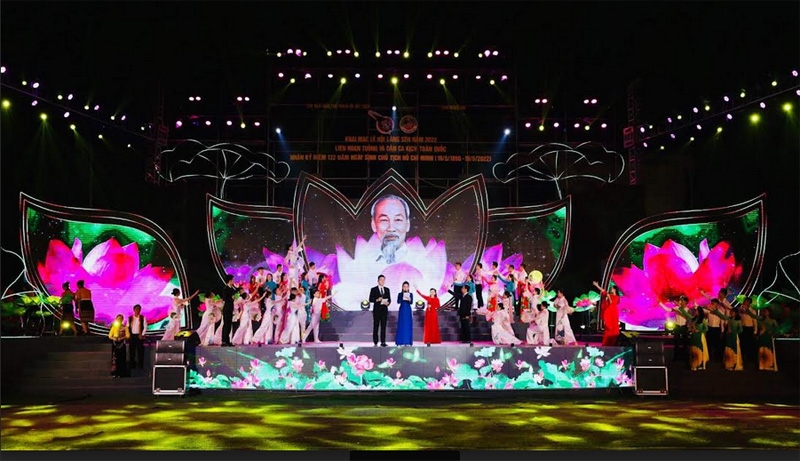 At the opening night of Sen Village Festival 2022.

The opening ceremony was attended by leaders from the Ministry of Culture, Sports and Tourism, Military Region 4, Nghe An Province, Ho Chi Minh City, Quang Ngai Province and Tuyen Quang, along with nearly 1,000 artists and actors.

The Sen Village Festival is a cultural event of great significance in the spiritual life of the people, an occasion for the people of the country in general, and especially the people of Nghe An Province, to express their infinite respect and gratitude for President Ho Chi Minh.

Sen Village Festival also creates conditions for people to enjoy and create cultural values, contributing to promoting the movement of studying and following Ho Chi Minh's thought, morality and style, towards meeting the country's sustainable development requirements. This is also an opportunity to praise the innovation of the homeland of Nam Dan, Nghe An, while at the same time promoting Nghe An's image to the whole country and international friends.

On the occasion, the Ministry of Culture, Sports and Tourism coordinated with the People's Committee of Nghe An Province to organise the 2022 National Classical Drama and Folk Opera Festival. The event is a meaningful activity for artists in general and especially for the people of Nghe An Province.

This year's National Classical Drama and Folk Opera Festival features the participation of 250 artists and actors from 11 units with 16 plays from Tuong theatres and art troupes throughout the Nghe An Province and the entire country. This is an opportunity to exchange, learn and improve creativity, and move together towards the goal of preserving and promoting national culture in general and building and developing Vietnamese theatrical art in particular.

Before the opening time of the festival, the organising board held a flower-offering ceremony at Uncle Ho's Monument at Ho Chi Minh Square, Vinh City, and at Kim Lien Special National Relic Site (Nam Dan).