At 10:00 a.m., more than a dozen fishermen in Ham Tien ward rowed baskets to bring octopus to sale in Rang fishing village. The round blue basket boats swayed on the waves, the people on the baskets waved their oars strongly, giving the boat the wind to glide.

Mr. Nguyen Van Minh, 52 years old, after pulling the basket ashore, quickly brought a large plastic bag full of octopus on the scale for buyers to wait under the coconut trees. The octopuses are fresh, eyes are clear, and he wholesales for 140,000 a kg. This trip caught nearly 6 kg, he earned 800,000 VND.

“This squid is fished near the shore, is still fresh, eats better than the squid caught in a net, so it is bought at a high price,” Mr. Minh said.

According to Mr. Minh, in the coastal land of Phan Thiet, the small octopus is called by the locals with the folk name “squid-loi”. The fishing boats often hit a lot in areas far from the coast of Rang. But for those who work in the fishing industry here, they usually fish 1-2 nautical miles from the shore, in the bay from Mui Ne to Phu Hai.

Doing this job, every day they have to wake up very early, from 3 am to row a basket to go fishing. The brothers in the association started from the coconut wharf behind the Rang church, when they were about a nautical mile from the shore, everyone dispersed themselves to fish.

The octopus hook is quite special. It is a cluster of 12 hooks attached to each other, spreading out in a circle. The top has a “fake prey” made of plastic, and the top is painted with colorful luminous colors (blue, pink, purple, yellow…) to attract the octopus’s visuals. 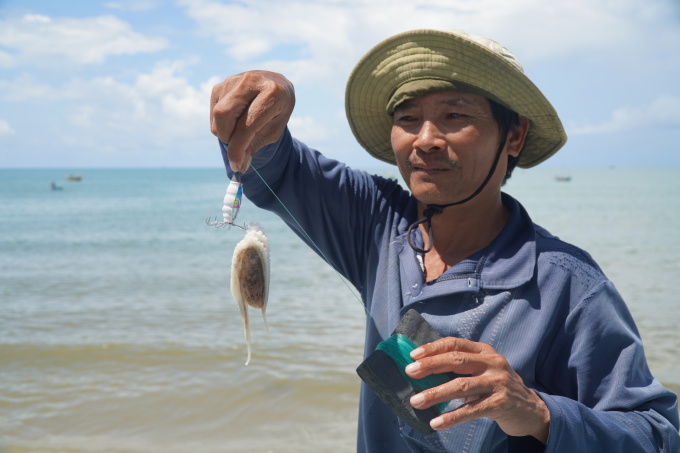 Each angler usually carries 10 beams of the tongue. All were dropped into the water, the line hung in the water lying around the basket. Whenever the fishing line jerks and stretches, the angler knows the octopus is hooked. “The squid sees fake prey, they swim to grab it, the tentacles will get caught in the hooks and it’s hard to get out,” Minh said.

Mr. Nguyen Van Sau, who has been with the profession for more than a decade, said that at the beginning of the rainy season, octopuses come closer to the shore to find food, so squid fishing is easier and more convenient. In other seasons, the brothers also work, but the squid is more sparse or they have to fish farther from shore.

In the area of ​​Rang fishing village (Ham Tien ward), there are about 20 people fishing for octopus, aged 24-55. Every day, at dawn, each fisherman scattered in one place. But at nearly 10 o’clock, as usual, they will row a basket to the shore for a while to sell squid to the ready-made termites. Le Van Tu, a person who specializes in buying octopus in the area, said that octopus connoisseurs in Phan Thiet often go to Rang coconut wharf at this time to buy the freshest octopus in the region.

According to Mr. Tu, in recent years this type of seafood has been very popular with tourists as well as locals. Therefore, the source of purchased goods is always selling well and is rarely in stock.

Octopus caught in Phan Thiet sea has a small size, 8-16 cm long, considered by seafood connoisseurs to be the most delicious, thanks to its crispy meat, not as tough as a large old octopus.

Octopus is processed with many delicious dishes, such as grilled, grilled satay, fried, steamed, dipped in vinegar, dipped in batches, dipped in tamarind leaves, salad, porridge… Currently all restaurants and eateries in Mui Ne area and Phan Thiet center all sell this specialty.