Loving the beauty of Phu Quoc, after graduating in Europe, Ba Nguyen returned to the pearl island to scuba dive, hunt, process seafood, and bring friends to experience the wildlife.

At 9 am, Ba Nguyen, 31 years old, brought all hunting and cooking tools to go to the deserted island. This is his hobby and habit when in Phu Quoc . Fishes are usually most concentrated in coral reefs, and concrete bridges at dawn or dusk, so he will be on the island all day. 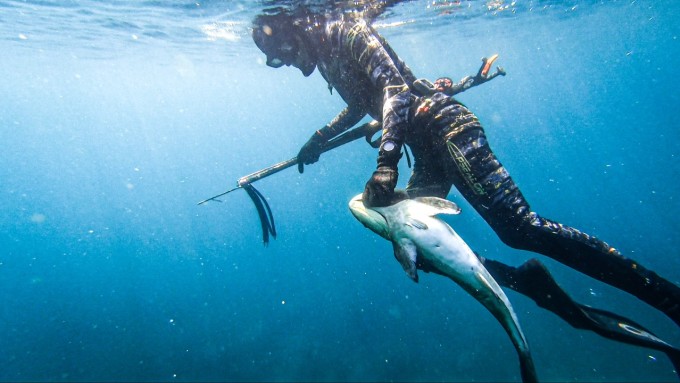 Wearing a protective suit to keep warm, wearing a propeller, and holding a spear to catch fish, Nguyen jumped into the water. For about 10 seconds, he dived 10-18 m deep, and at the same time released pressure so that his ears would not hurt due to water pressure. Holding his breath for about 2-3 minutes, he dived around the coral reefs. The first time he couldn’t find the fish, he surfaced and continued diving a few times. Seeing that the old rafters and silver snapper were big enough, he hurled his javelin with great force to catch them. To add variety to his meal, he catches shellfish or squid in the mud, looks for oysters under coral arches, and as he walks through mangroves, tries to find sea crabs under the roots of mangroves.

With a sharp field knife, he scales fish, peels oysters, and then processes them. A meal can be fresh sashimi, or charcoal-grilled seafood with Asian, European and African recipes that he has learned before. Many times he buys more crabs and shrimps from beachgoers or orders lobsters from Nha Trang or Australia to fill the meal.

“I love the wild experience, but it’s not exactly like Robinson. The food is not temporary, even if you alone have to try to cook well, decorate it beautifully and enjoy,” he said. 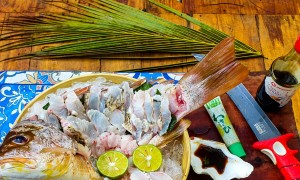 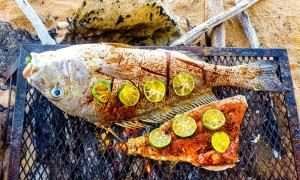 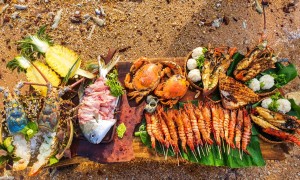 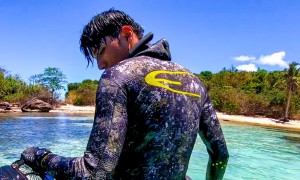 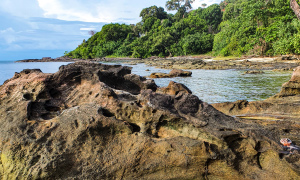 Journey back to the wild

Nguyen was born and raised in Vung Tau, from a young age associated with swimming in the sea or catching grasshoppers with friends in the field. At the age of 10, he moved to the Czech Republic and graduated from university with a major in economics and a master’s degree in global security.

Passionate about freedom, loved the sea, spent time in Europe exploring and traveling in the waters of Italy, Norway, Portugal, and Greece. From university, he studied diving and spent money to buy specialized equipment. The basic suit is 15 million VND and gradually upgraded to 70 million VND as it is today.

In 2012, Nguyen’s parents moved from Vung Tau to Phu Quoc to live and invest. Every winter break, he comes here to travel and explore the island. Loving the wild beauty and diversity of the sea and forests, at the end of 2019 he decided to stay in Phu Quoc for 6 months and then return to Europe, but the outbreak of Covid-19 made him “stuck”.

Being stuck in Phu Quoc, along with passive income from financial investment during his master’s degree, Nguyen decided to retire early. Every day, he spends a lot of time renting a motorboat to go to Rach Vem, Rach Tram, Xuong Islet, Gam Ghi Island and even the deserted islands in the north. Seeing where there are no people, he will stay to dive, hunt and cook for himself.

Before diving anywhere, he learns information about fish and seafood to avoid hunting inedible or on the conservation list. Besides diving gear, he pays great attention to fire tools, grills or stoves… He makes all kinds of cutting boards and wooden tables from driftwood to present his dishes. The spices he brought with him were as diverse as paprika, American Cajun seasoning, onion powder, and cumin powder; In addition, there is salt, pepper, lemon, onion, cilantro, passion fruit, avocado, cheese, olive oil, sesame oil, soy sauce mixed with sashimi, mustard… The decoration to make the dish beautiful is up to inspiration. and the things he got like banana leaves, coconut leaves, dead coral stones, and sea flowers.

“I think that if I catch it, I will be able to cook and cherish that dish as much as possible. The only way for me to show that respect is to make it delicious and beautiful,” he said with a smile.

He shared that wild diving in Phu Quoc has many advantages because of less strong currents, and warm water around 28-29 degrees Celsius, different from many seas he has explored before. Like fishing in Bali, Indonesia, the water is strong and dangerous, sometimes there is even a countercurrent pushing down from the water, making divers shiver. In Portugal or Norway the water is cold, about 14-16 degrees Celsius even in the middle of summer.

But he also shared many worries about the waters of Phu Quoc, as well as in other parts of Vietnam, that seafood is over-hunted, which can lead to resource depletion. At the same time, the current tours are also heavily exploited, leading to plastic waste, and no longer the inherent wild beauty. He shared, up to now, finding fish in Phu Quoc is not easy. Therefore, 20 kg sailfish are very rarely caught. 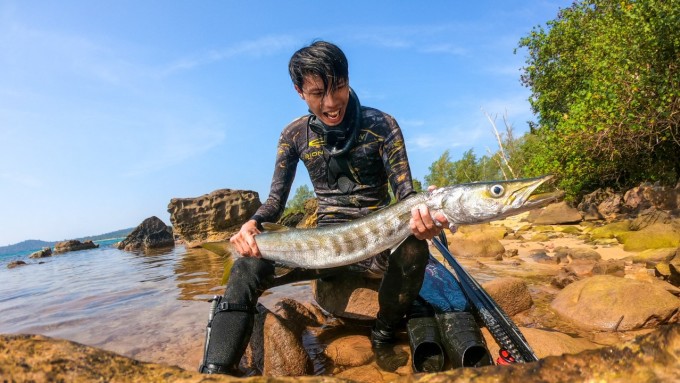 In 2019, when friends in Europe travel to Vietnam, he often takes them to experience. Up to now, there are many young Vietnamese people who love this subject and accompany him. Thien Khoi, in Ho Chi Minh City is one of them. He said that he joined Ba Nguyen in December 2021, in addition to 3 younger brothers.

Khoi has experience with diving, and after knowing about Nguyen’s journey on the tour group, he connected to go with him. They spent the whole day on a boat at Ganh Hao, near Mui Trau beach in the north of the island. With Nguyen’s experience with the water, they stopped and started diving for fish. About half an hour, if not found, they will move to another location.

Khoi and the children used spears to catch fish that Nguyen lent them, after more than an hour they caught two large seabass, so they all went ashore, rested, and then lit a fire to cook. In the afternoon at 3pm, after packing up their belongings as well as picking up trash left behind by others on the beach, they returned to the mainland. Everyone’s heart was excited and the feeling of victory.

“This is a popular sport in the West, combining movement with travel and discovery, very suitable for today’s trends. Experiencing this sport is really interesting but will only really suit those who have a passion for exploring. destroy nature,” he said.

Nguyen shared that he did not intend to do a mass tour. He hopes that when taking everyone along and sharing beautiful images, he will contribute to preserving the wilderness, and the remaining true natural experiences in Phu Quoc. “After my journey, people are inspired to go to the beach and think about the sea, which is a success for me,” Nguyen said.

When international travel returns to normal soon, he will take the time to explore new destinations around the world, continuing to experience the wilderness he loves.