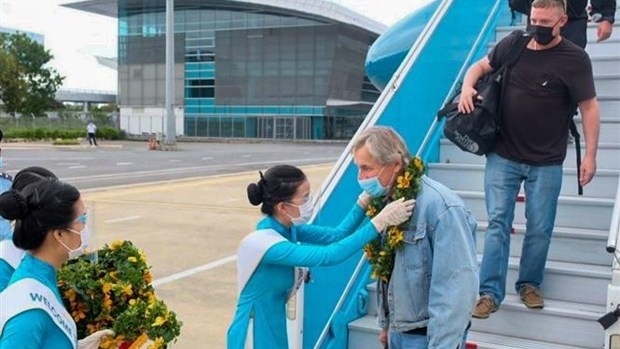 NDO/VNA – The Ministry of Foreign Affairs will coordinate with the Ministry of Culture, Sports and Tourism to complete plans on tourism resumption and devise a policy on visas for foreign tourists, the ministry’s spokesperson Le Thi Thu Hang said at a press conference on February 17.

According to the spokesperson, the Ministry of Culture, Sports and Tourism has been assigned to work on regulations towards international visitors, and join hands with the relevant ministries and agencies to make a detailed report on the visa policy to the Government and the Prime Minister.

Visa procedures will basically continue to be carried out in accordance with existing legal documents such as the Law on Foreigners' Entry in, Exit from, Transit through and Residence in Vietnam, she said.

As of February 16, a total of 14 countries and territories had recognised Vietnam’s vaccine passport. They are Japan, the US, the UK, Australia, India, Belarus, Cambodia, the Philippines, Palestine, Maldives, New Zealand, Sri Lanka, Egypt and Turkey.

A number of other partners are considering the recognition and will reply soon, she said, noting that the foreign ministry and Vietnamese representative offices in foreign countries are working hard to win their recognition of the Vietnamese vaccine passport.

Vietnam has accepted vaccination certificates or vaccine passports of 79 countries and territories, which were officially sent to the foreign ministry, she said.