HA TINH – At the beginning of the 12th lunar month, people in Huong Son district start harvesting oranges, selling them for between 15,000 and 40,000 VND per kg. 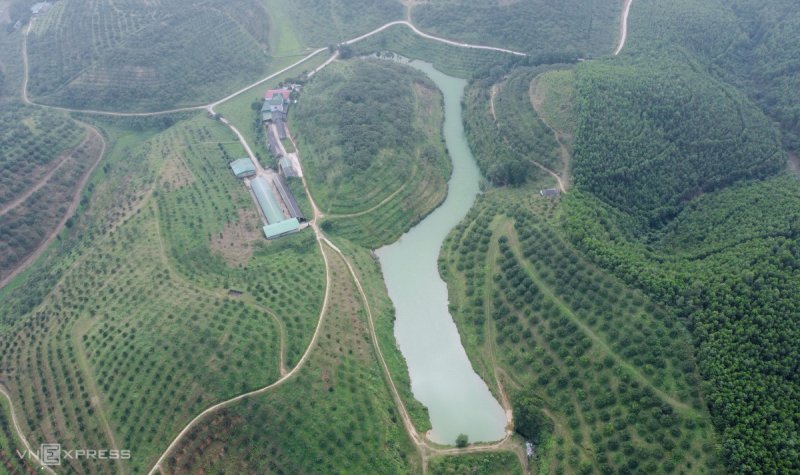 Huong Son district is the capital of Huong Son orange variety, with an area of ​​more than 1,000 hectares, concentrated in Kim Hoa, Son Truong, Son Ham communes… Families often renovate hills and set up farms to grow oranges. . On average, each household owns from one Sao to more than 30 hectares of land and grows thousands of trees. 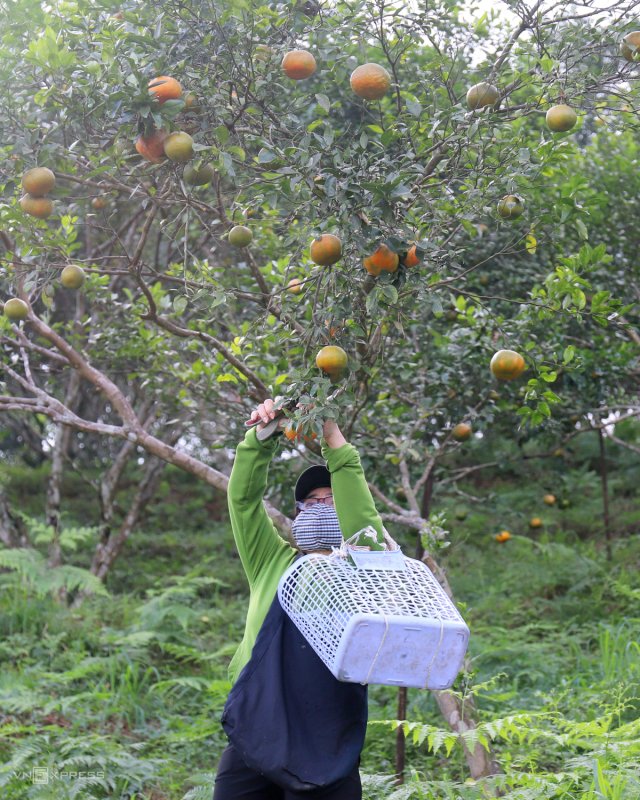 At this time, many orange orchards in the district are ripe, and traders come to the garden to buy and sell at markets.

The harvest season of Huong Son oranges starts from the beginning of the 12th lunar month and lasts until the Lunar New Year. 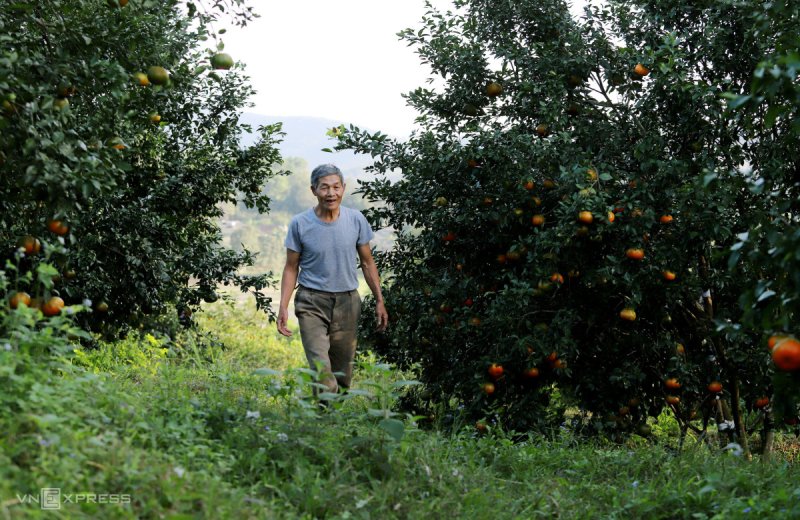 “The average tree is 3 m high, 5 m wide, has a life cycle of about 15 years. If the root is well taken care of, it can reach 20 years. After this time, it must be replaced. Every year I always cut branches of some old trees. years in the garden, planted in many other locations to maintain the variety”, Mr. Dat said. 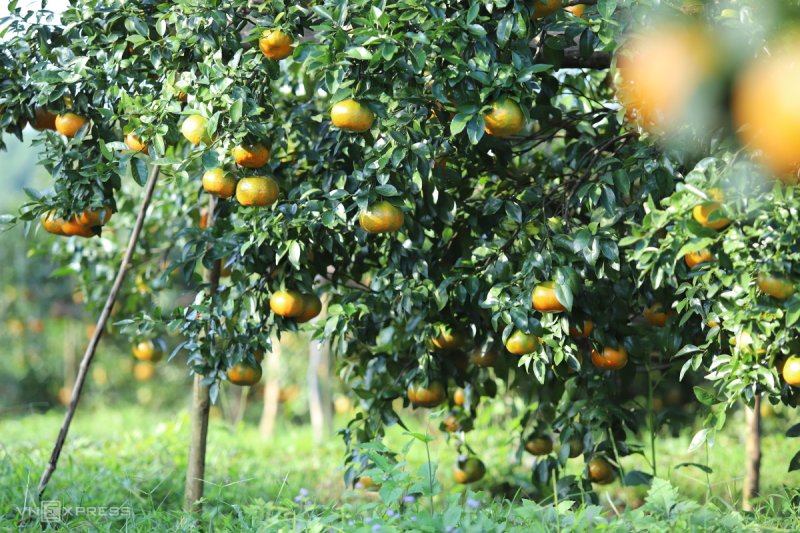 Mr. Dat’s orange garden has ripe yellow fruit, each tree gives from 100-200 fruits depending on the size, there are 300 fruit trees, yield from 1-3 quintals.

The 60-year-old farmer often props wooden and bamboo poles on the branches so that the tree has airiness, does not get dew, and avoids fruit drop. In addition, this also prevents the branch from breaking, or swooping to the ground, causing the fruit to spoil quickly. 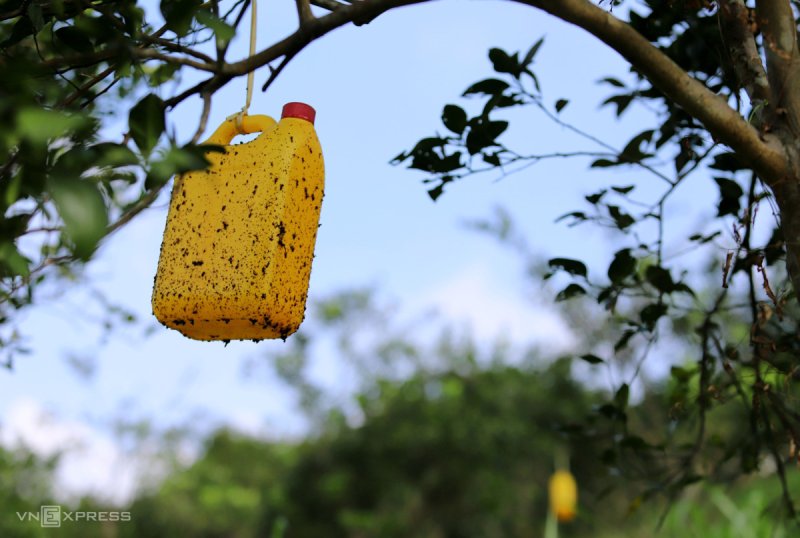 Garden owners use biological drugs to put in cans to attract insects, when they come, they will be glued on the outside of the can. After more than a week, the traps are taken to treatment for reuse. 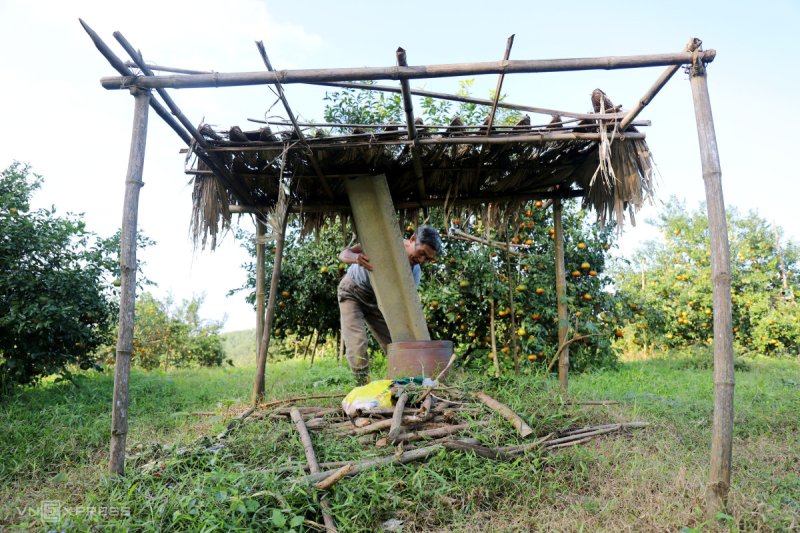 Many people make tents in the garden, put a crock pot inside, and set up Fibro-cement panels to catch rainwater from the thatched roof. When spraying biological pesticides, if there is a shortage of water, they will take it from the reservoir so that they have to move less. 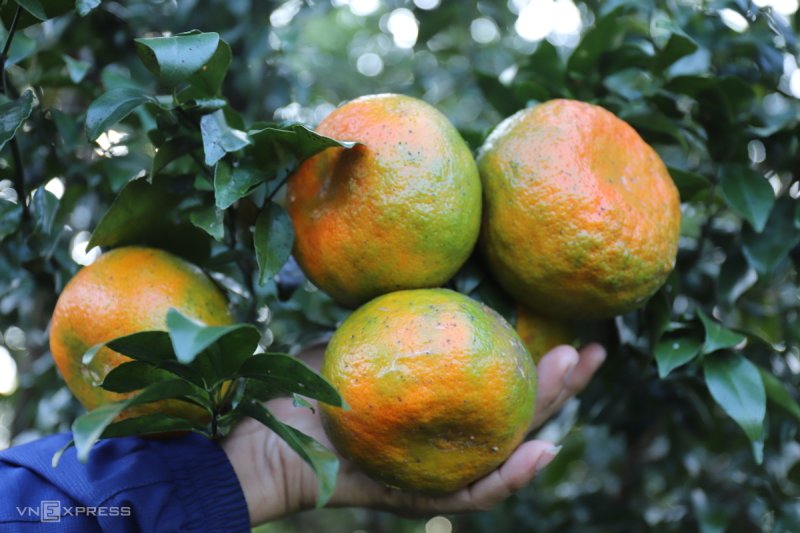 Huong Son oranges when ripe have a deep yellow color. At harvest, to keep the oranges fresh with the stem and leaves intact, people have to gently support the bottom of the fruit with their left hand and carefully prune scissors in their right hand. 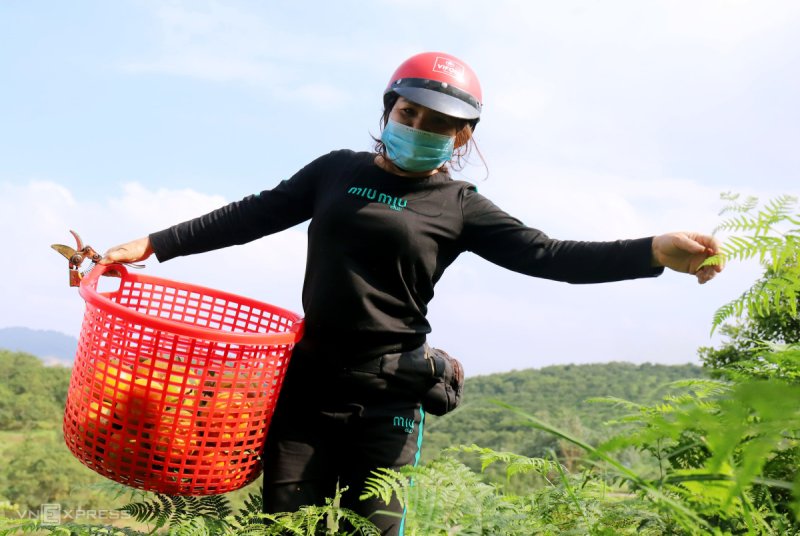 “At the beginning of the crop, I went to the garden to buy about 15-20 kg a day and bring it to retail at markets in Huong Son district. Near Tet, I will collect a large quantity to import for fruit shops,” said one person. said the merchant. 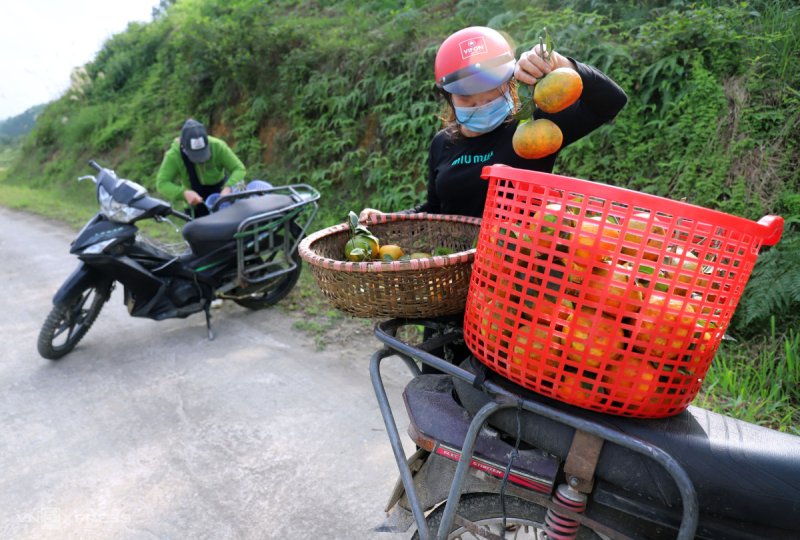 After picking, the traders put the oranges on their motorbikes, put them in a basket, and then went to the garden owner to weigh them and pay the money.

Mr. Nguyen Van Dat said that last year the orange orchard compensated for the income of about 200 million VND. This year, due to Covid-19, consumption has been difficult, oranges have reduced the price from 10,000-15,000 VND per kg compared to before, the amount of money is expected to reach about 120 million VND. 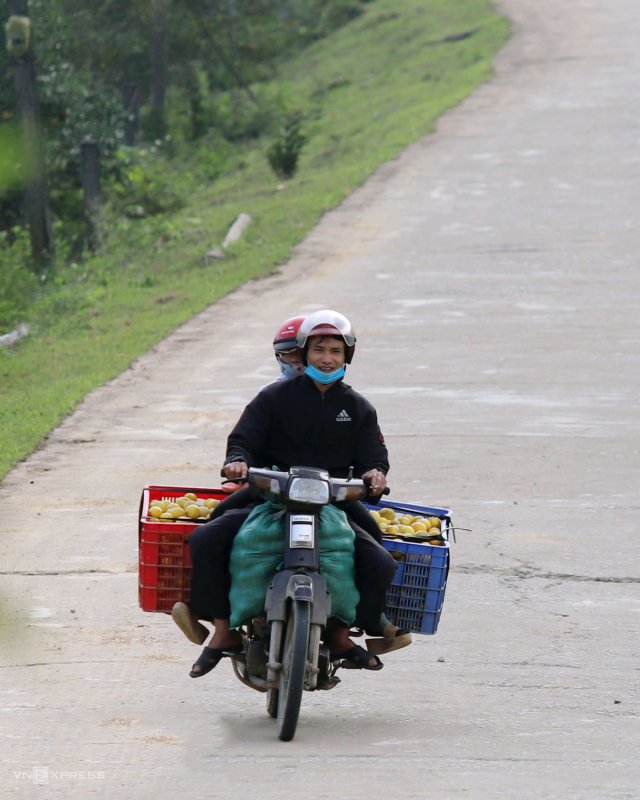 In addition to buying offset oranges, traders also collect citrus notes at the end of the crop and bring them to partners. Citrus oranges are interspersed with compensating oranges, smaller fruit, selling price from 10,000 VND to 30,000 VND per kg. 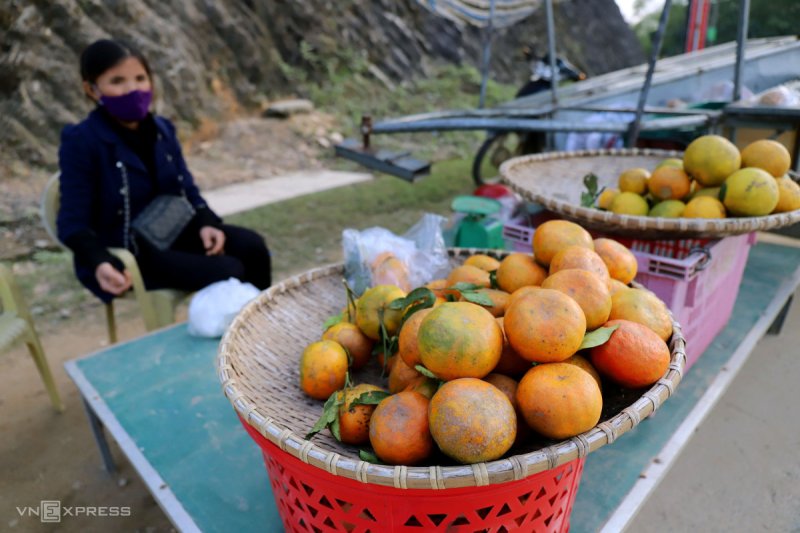 Oranges are sold along National Highway 8A, passing through the Huong Son district.

According to the Department of Agriculture and Rural Development of Huong Son district, this year, the output of offset oranges in the area is estimated at nearly 11,000 tons, with a production value of nearly 350 billion VND. On average, each household earns from a few tens to hundreds of millions of dong, and there are large farms with billions of dollars in revenue. 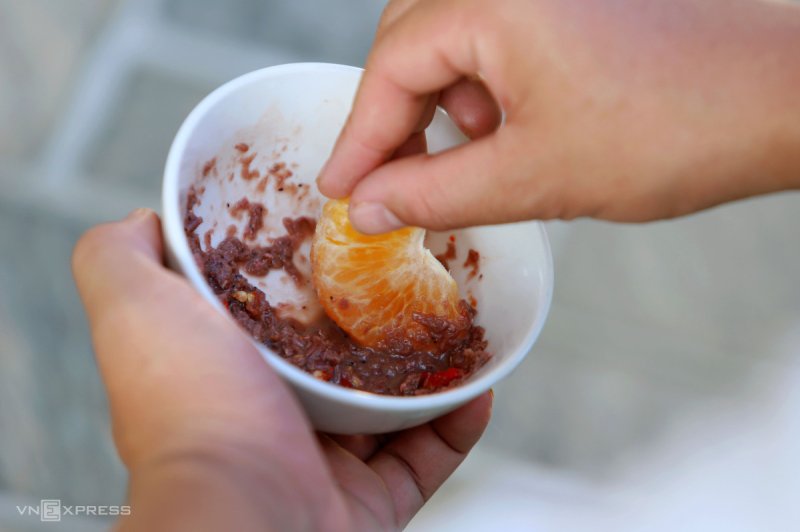 Orange is succulent, sweet, and fragrant. In addition to eating the usual chunks, locals also eat oranges with white salt or a bowl of shrimp paste mixed with hot peppers.

Mr. Bui Nhan Sam, Secretary of the Huong Son District Party Committee, said that oranges are the unique specialty of the area, the main economic development tree of the district, bringing a decent income to growers. This fruit is often ripe on the occasion of the Lunar New Year, in addition to being sold, it is also used as a gift from far away.