Mr. Truong Hai Phong (35 years old, living in Thot Not District, Can Tho City) owns the strangest chicken in the West, with a hairless body, likes to eat rice according to human portions, and plays on a tray. …

Sitting open each piece of durian to put on a tray with papaya, Phong said that this is a seasonal or daily dessert for a featherless chicken ” unique in the West “. In particular, because he loves the chicken like a family member, he feeds it 3 meals according to the family’s diet. “The love to eat durian was discovered by the family while eating fruit and the chicken squealed loudly, when feeding, it became ‘addicted’ until now”, Mr. Phong said. 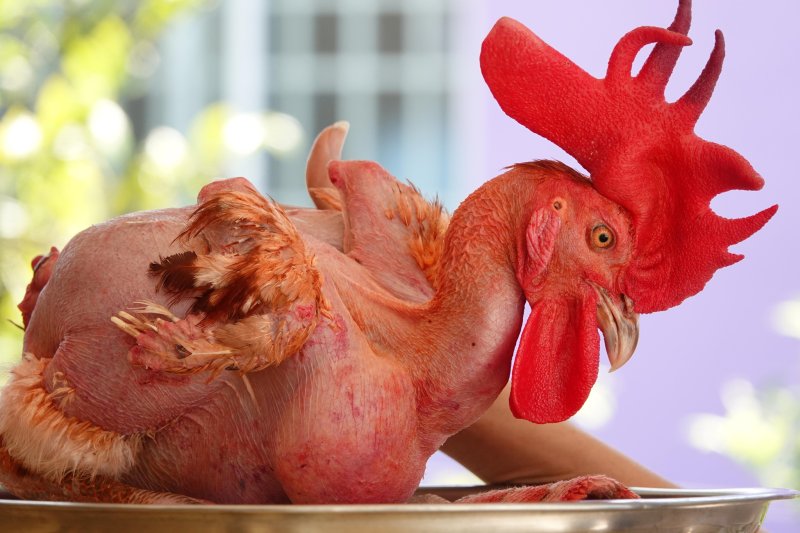 Mr. Phong said that he has been in the business of ornamental chickens for more than 8 years now. In 2017, he imported 2 pairs of Peruvian chicken breeds from abroad to raise for breeding for $2,500 (nearly 57 million VND). After the normal period of spawning, the pair lays a featherless chick. Seeing that, he left it as an ornamental. 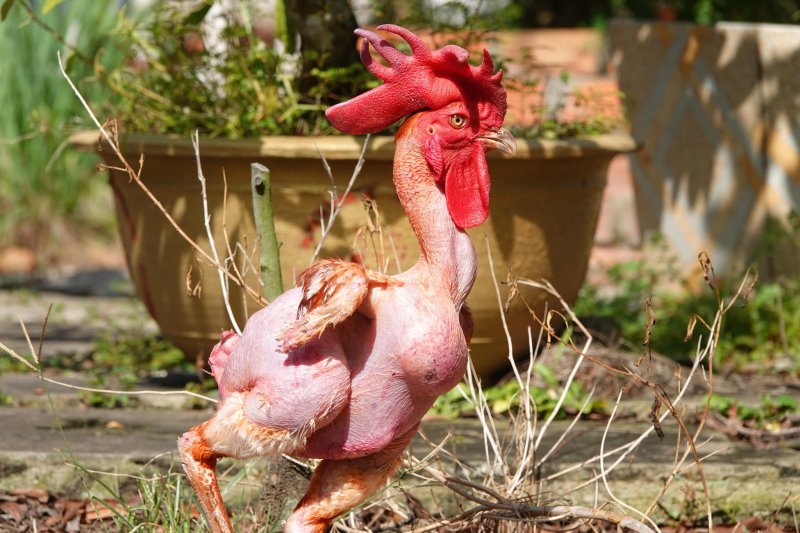 “Parent chickens have full plumage. For many years, the hens laid many litters normally, but recently, after laying 8 chicks, one of them was featherless. Therefore, I had to raise it in an incubator, warmed like a premature baby. When he was a little older, let him sleep on a mosquito net to avoid mosquitoes,” Phong said. 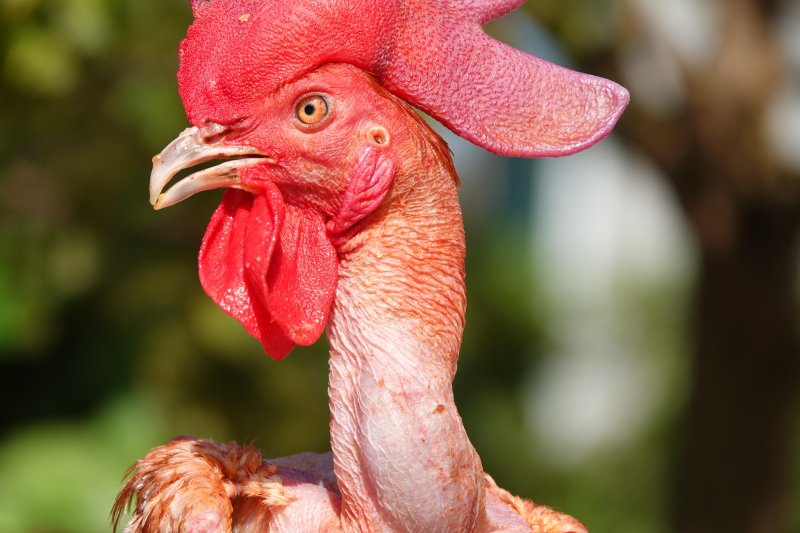 The Peruvian breed of chickens has “aggressive” characteristics.DUTY TAN

Have as many hobbies as people

Since the chicken was young, Mr. Phong often took it to the market, always wearing a gold chain around his neck, which looked very funny. He posted a photo of a featherless chicken on social media , attracting the attention of many people. 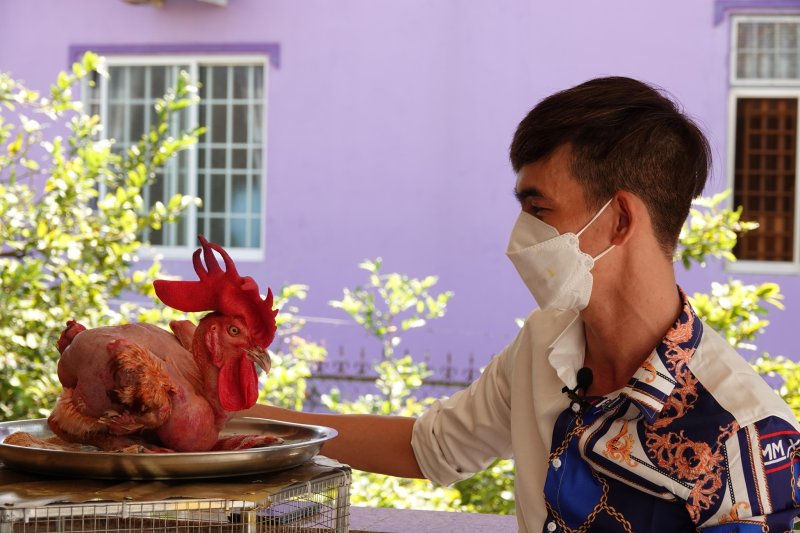 Up to now, the featherless rooster is 18 months old, weighs 3.3 kg, and has many strange hobbies such as: likes to be petted; eating 3 meals according to the owner’s diet; dessert with fruit, most like to eat durian, papaya; enjoys sunbathing; sitting on the platter… 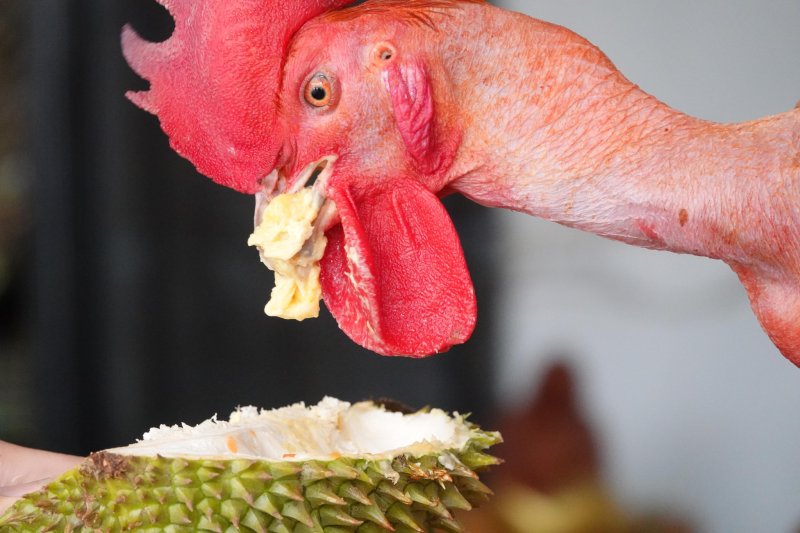 I like to eat fruit desserts, especially durianDUTY TAN

“Because the chicken has no feathers, he has to sleep with a mosquito net and regularly apply turmeric to protect the skin and avoid mosquito bites. Chickens like to bask in the sun, so they often go to the garden to lie in the sun for hours, when hungry, they come to the owner and then poke and peck to signal for food. Every day, I feed it 3 times: morning, noon, afternoon. Bathe it 2-3 times a week, usually with scented soap, shower gel or clean with a towel,” Phong shared. 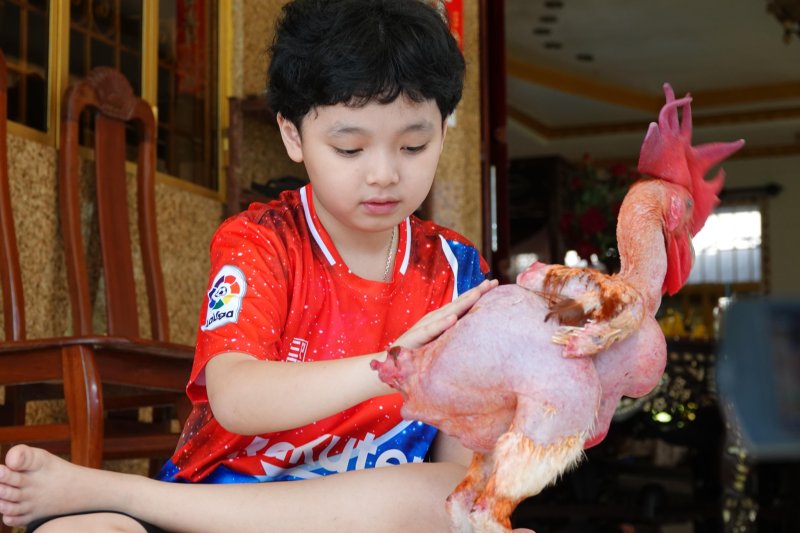 This breed of chicken only likes warm weather , when it’s cold, the skin turns pale and often stays in one place to warm up. When the weather is warm, the chickens are very active and the skin is red and ruddy. Because the chicken has no feathers, it is curious to everyone and some people believe that it has been plucked by its owner. However, Mr. Phong confirmed that the chicken was born without feathers, the skin is smooth and white, if the feathers are plucked, the pores will appear very large and clear. 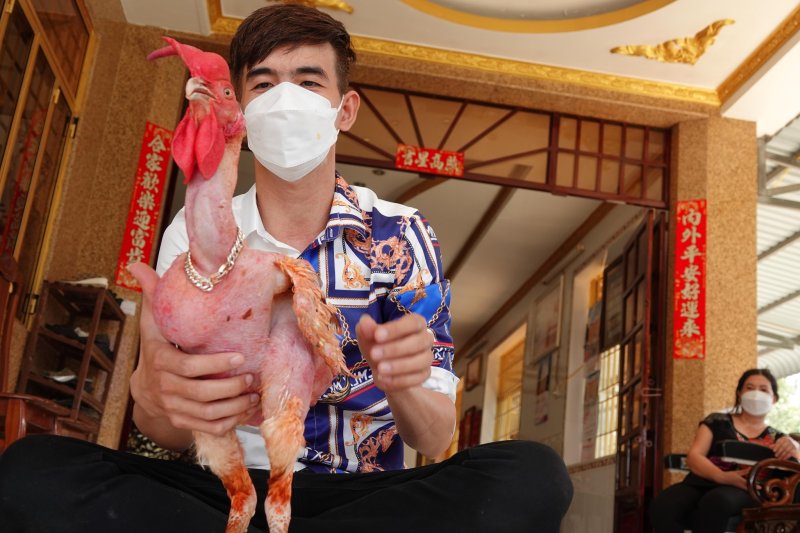 Some people asked to buy the featherless chicken at a high price, but Mr. Phong has no intention of selling it. “Recently, I also let the paired featherless chickens reproduce 1 litter and luckily got 1 featherless hen. The hens are now 1 year old, and in the near future, I hope to multiply the flock in a larger number to raise ornamental plants. 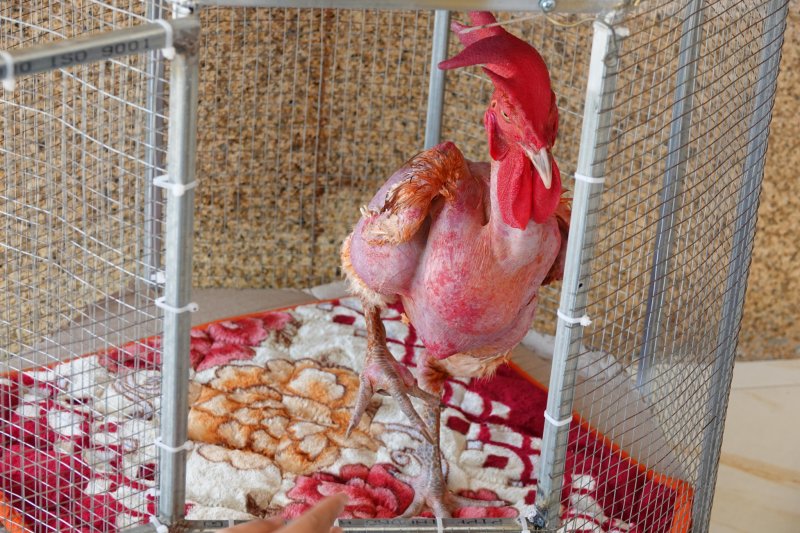 Featherless chickens have their own coop that is made of nets, lined with towels, and sleeps on a mosquito netDUTY TAN

Ms. Le Thi Thuy Diem (30 years old, living in Can Tho city) said: “I’ve never seen a chicken with a funny hairless body and a child-like personality. This can be said to be a strange and unique chicken in the West.