Binh Duong Tibetan (Tay Tang) Temple is not only a famous spiritual tourist destination but also attracts visitors with its beautiful architecture and many records. With the experiences of discovering Tibetan temples in Binh Duong below, you will have the most complete trip to this famous temple.

Where is the address of the Tibetan temple in Binh Duong?

Tibetan Temple is located at 46B Thich Quang Duc, Chanh Nghia, Thu Dau Mot, Binh Duong. The temple was built according to Tibetan Tantric architecture, impressive with the statue of Bodhidharma made from the hair of thousands of Buddhists. The pagoda has a large space and is planted with many ancient trees to bring fresh air. Along with the unique architecture, the Binh Duong Tibetan Temple becomes a destination that attracts tourists from all over the world on the occasion of the New Year to worship and admire the pure scenery. 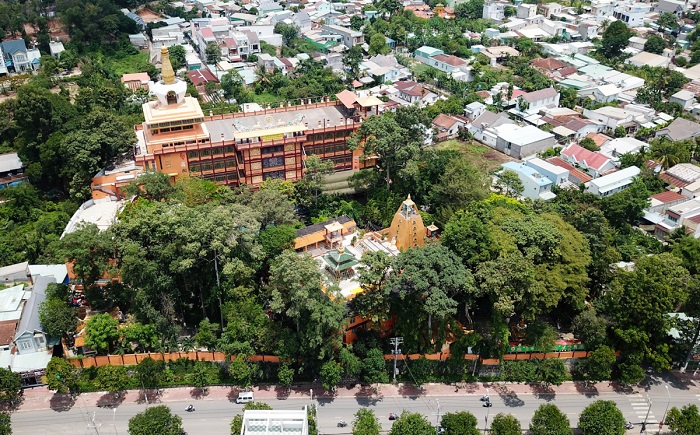 Tibetan Temple has a spacious campus with many trees

How to get to Binh Duong Tibetan Temple?

Experience going to Tibetan temples , to get here, you first need to get to the center of Binh Duong province by means of transport including: passenger car, motorbike or self-driving car. Then move southwest to TL750/DT750/Provincial road 750/Provincial road 750 in the direction of DT240. Go straight along route 30/4 to Hong Nhung screen -> turn right into the direction to Binh Duong/QL13. Continue going for another 21km -> turn right at Nam Quoc store -> Thich Quang Duc -> go to Binh Duong Tibetan Temple .

The total distance from Binh Duong to the Tibetan temple is about 48km. Travel time by motorbike is about 1 hour 10 minutes. If you do not know the way, you can look up google maps or take a taxi. 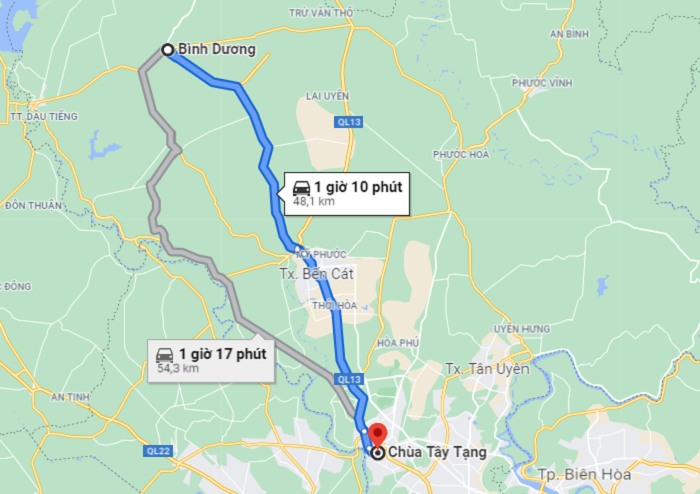 How to get to the Tibetan temple

Thu Dau Mot Tibetan Temple was built in 1928 by Zen Master Minh Tinh. This temple used to be called Buu Huong, belonging to the Northern sect. At first, it was just a small temple to worship Buddha and let Zen masters practice. In 1937, the pagoda was changed by Zen master Minh Tinh to the Tibetan Temple.

This famous temple in Binh Duong has experienced abbots such as:

– Master Minh Tinh is the founder of the Tibetan temple.

– Most Venerable Thich Tich Chieu is the second abbot.

– Most Venerable Thich Chon Hanh is currently the incumbent abbot. 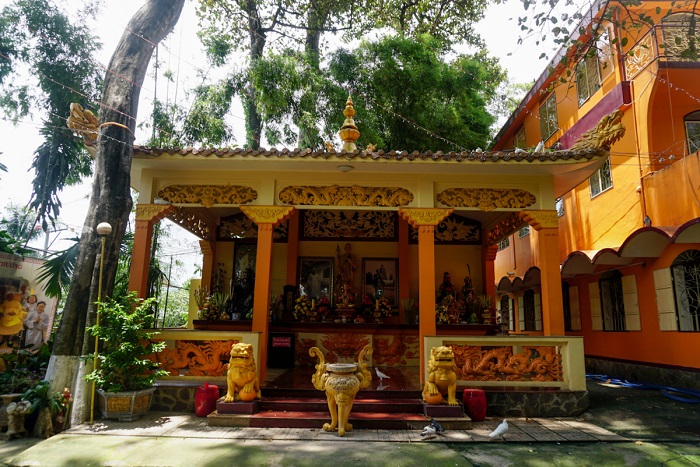 The Tibetan temple has experienced three generations of abbots

Admire the unique architecture of the Tibetan temple

What does Binh Duong Tibetan Temple have? Originally, Tibetan temples were designed with the same architecture as the temples in Tibet. The main hall of the temple has a square design and in the middle is a tower and quadrilaterals about 15m high. The top floor is the roof of the temple, where there are five Buddhas of Tibetan Buddhism. Especially, the statue of the Tathagata has the same shape as the Mandala of Tantric Buddhism. 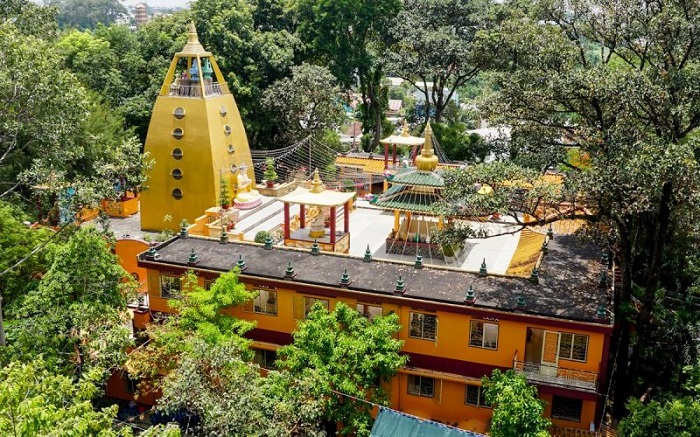 The unique architecture of the Tibetan temple

When moving deep inside the main hall of the Binh Duong Tibetan Temple is a place of worship. In the middle of the shrine is to worship Buddha Shakyamuni in a sitting meditation position about 2.3m high and around are worshiping Buddhas and Bodhisattvas. Tibetan temples have unique architecture and are different from the temples in our country. That is also the reason why this temple attracts tourists today. 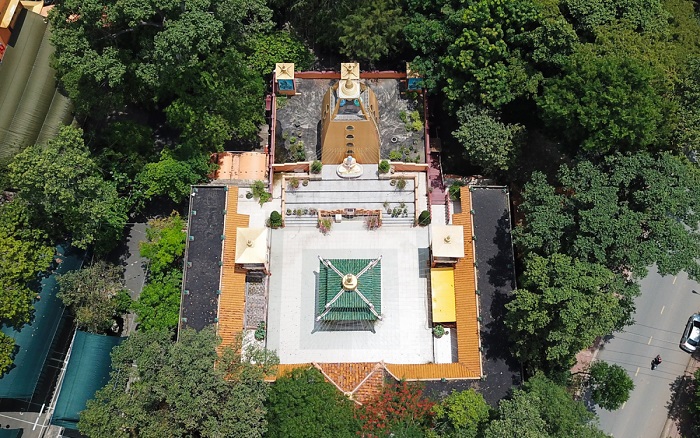 Admire the Tibetan Temple from above

The temple has the largest hair statue in Vietnam

The unique feature of the Tibetan temple is that it owns the largest hair-made statue of Bodhidharma in our country and is recorded in the Guinness Book of Records. The highlight of this statue is that it depicts the spirit of Bodhidharma and the most honest details. The first ancestor of the Zen sect, Bodhidharma, was in the posture of carrying a pole on his shoulder. One side was a bag of kanji and the other was a box of the Lang Gia Sutra. The most prominent is the conical hat on the burden typical of Vietnamese culture. 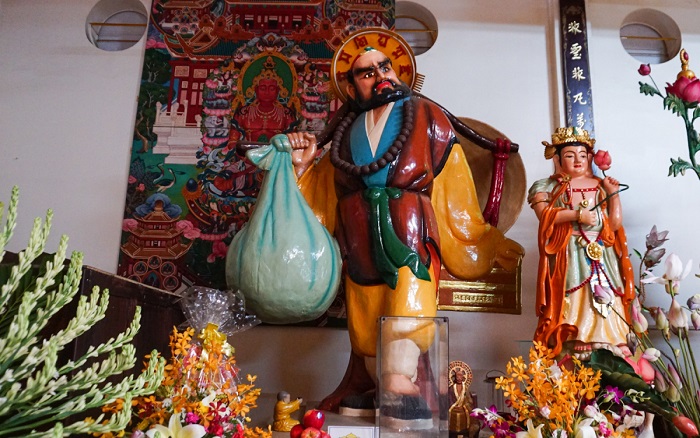 The most outstanding detail of the Bodhidharma statue is that it consists of three parts designed separately and attached with glue. The frame of the statue is made of iron and the material is mainly from Buddhist hair. This hair statue is 2.38m high and the dog is 1.74m wide. 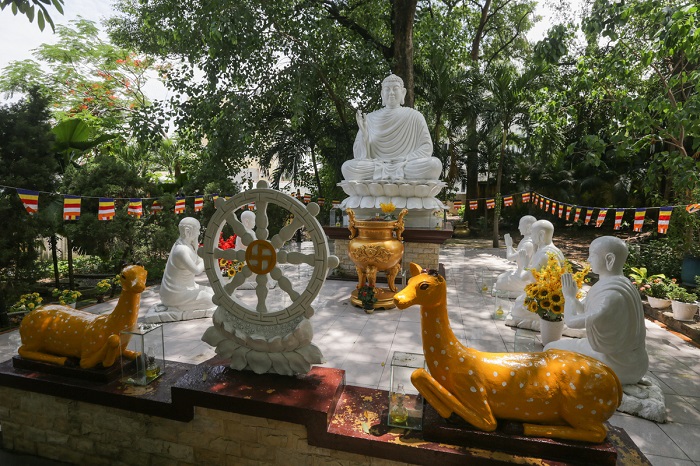 Inside the Tibetan Temple

Visiting Binh Duong Tibetan Temple , besides admiring the statue made of hair, you can also listen to many stories surrounding the temple. Especially the process of monk Minh Tinh when he was still in India, Tibet and returned to Vietnam to build this famous temple. Monk Minh Tinh’s entire journey to Tibet is recorded in a diary and kept in the temple. 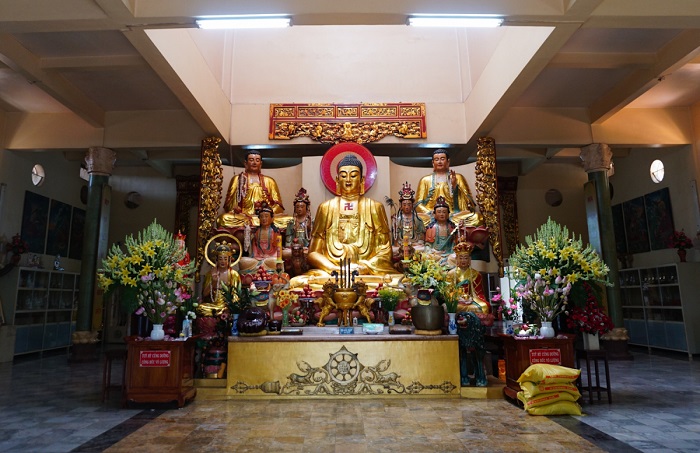 Visiting a Tibetan temple on the occasion of the New Year holiday, visitors will be able to sightsee and participate in many unique cultural activities. On the evening of the 8th day of the 1st lunar month, the temple holds a ceremony to pray for peace and resolve the drought, attracting a large number of tourists from all over the world. 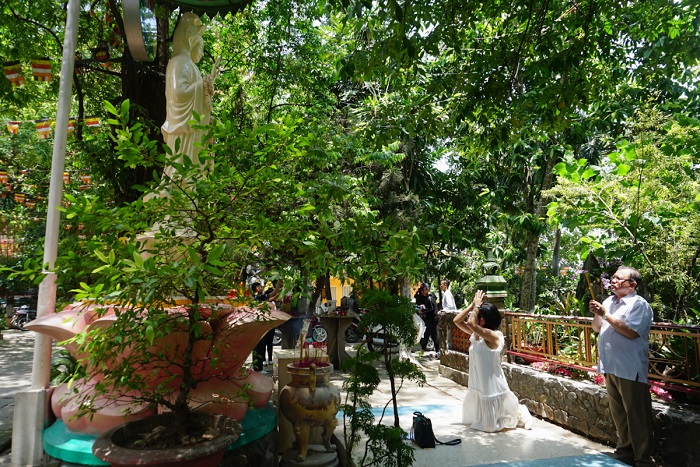 The temple attracts visitors to worship

Visiting a Tibetan temple in Binh Duong, you should also know a few notes below:

– Should dress politely and discreetly when visiting and sightseeing Tibetan temples.

– Do not cut flowers, break branches or touch Buddha statues in the temple.

– Avoid laughing and talking loudly inside the temple.

– It is possible to set up a ceremony at the area near the temple gate on the Tet holiday.

– If you want to learn more about Tibetan temples, you can meet monks on Buddhist occasions.

– You can combine visiting the famous Hoi Khanh pagoda in Binh Duong with the giant reclining Buddha statue.

Binh Duong Tibetan Temple possesses beautiful architecture and pure space, is an ideal destination to relax the soul as well as worship Buddha. Hopefully, the information shared above will help you have the most complete tour. In addition, you can refer to: Binh Duong travel experience