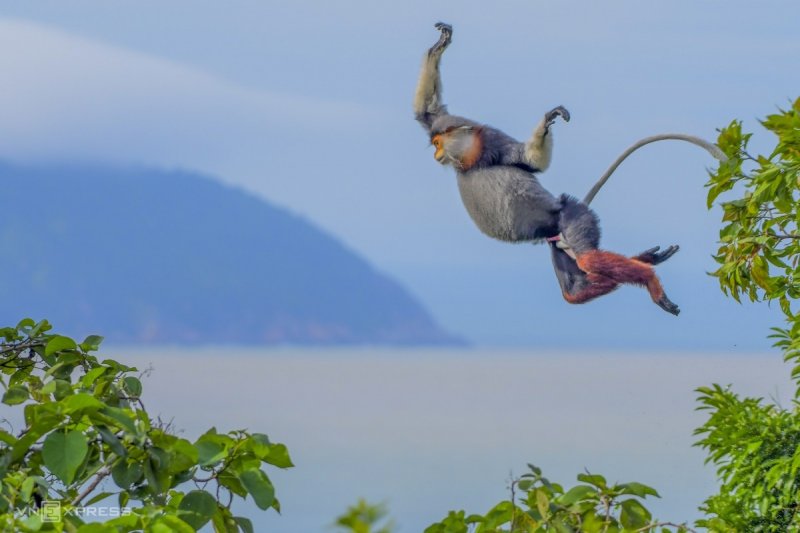 Douc langurs and brown-legged langurs jump branches over Son Tra forest like a circus performer “flying” over Son Cha island shaped like an upside-down pan in the distance.

The work is part of the photo series “Son Tra Natural Wonders” by photographer Duong Duc Khanh. He was born in 1978, in Huong Thuy, Thua – Thien Hue, but grew up and worked in Da Nang. Anh Khanh is currently the administrator of the group “Son Tra Forever Green” established in 2018, bringing together enthusiasts of beautiful natural photography on the peninsula. 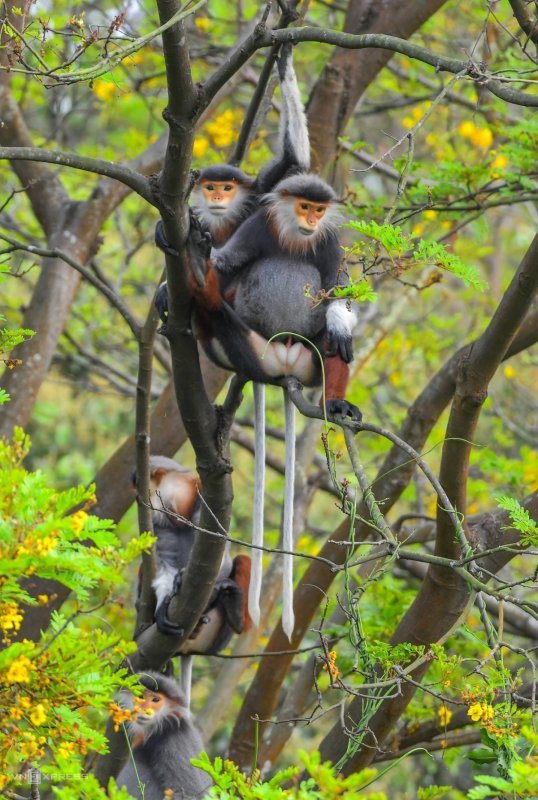 Son Tra peninsula covers an area of ​​more than 4,400 ha, 13 km long, 350 m high, about 10 km from the center of Da Nang city. It has a diverse forest ecosystem, nearly 1,000 species of plants, hundreds of animals, in which the “treasure” is the douc langur, and hundreds of individuals that are being strictly conserved.

Son Tra tourist route is a place where visitors can enjoy watching and hunting beautiful pictures of langurs. From Yet Kieu Street, visitors move along the slope leading to Son Tra about 2 km, if lucky to meet a herd of langurs to feed. Visitors exploring the forest can contact the forest ranger in Yet Kieu for guidance. 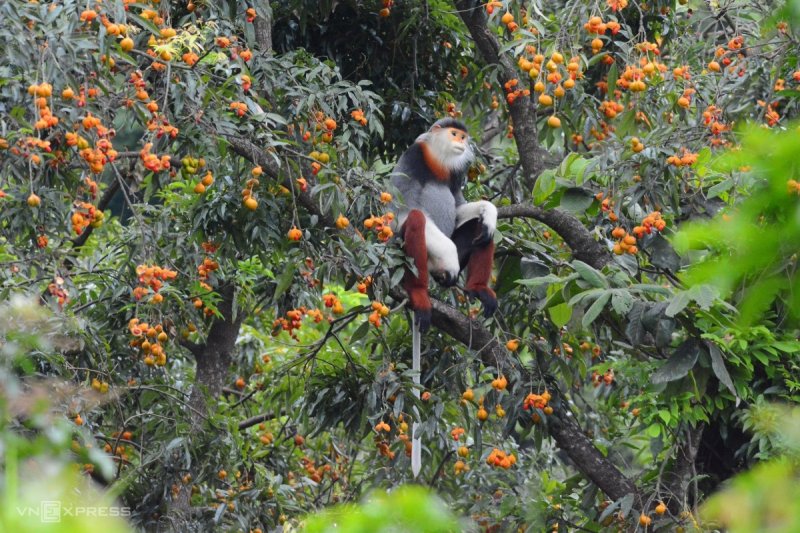 Son Tra has its own beauty at different times. The landscape of the forest is bright purple in May, he is full of ripe fruit in July (pictured) or the forest is red and yellow in late autumn, making the landscape picture here rich all year round. 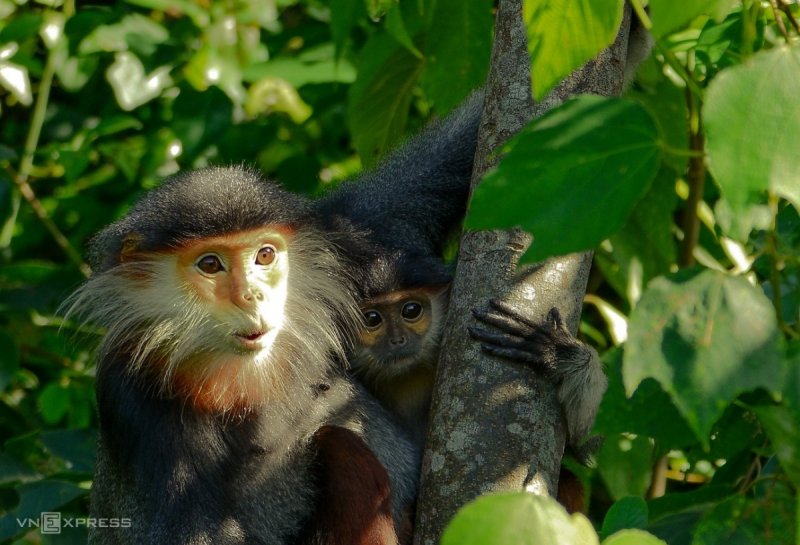 “Talking eyes” of mother and daughter langurs welcome the sun. The “primate queen” in addition to the name brown-shanked douc langur is also known as iridescent langur because of its multi-colored coat, such as yellow, brown or sepia, orange, gray, black, and white. The top of the head near the forehead has colored feathers. black, bright yellow face and reddish-brown legs, the adult male body is about 55 – 63 cm long, the adult female is 50 – 57 cm long.

Mr. Duc Khanh said that almost every day, any flower season, regardless of rain or shine, he also went to Son Tra to photograph wildlife. If he didn’t meet the langur, he would still be happy to be released into the green space of the mountains. The time frames he usually works are early morning and noon because at this time there are no people and the possibility of langurs appearing is high. 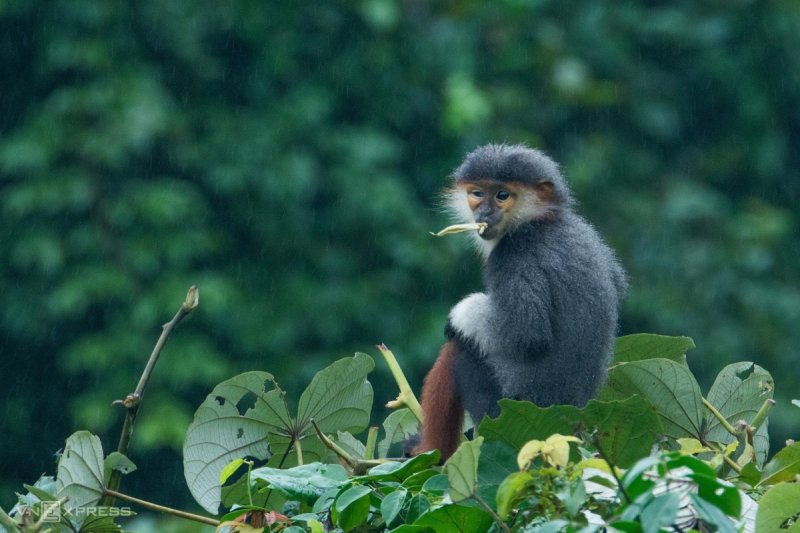 Immature langur with ‘contemplative expression’ eating in the middle of a sudden drizzle.

“Watching this species is not difficult, go on the right occasion and close-up skills so that the langurs are not afraid, especially when encountering them on the roadside, just ignore them, silently approach, just be silent, they will also less afraid, it is best to be absolutely silent,” Khanh shared the secret of shooting. He added that the animal photography equipment is not too sophisticated, just with a mid-range camera, a 70-200mm lens, there are good photos of them. 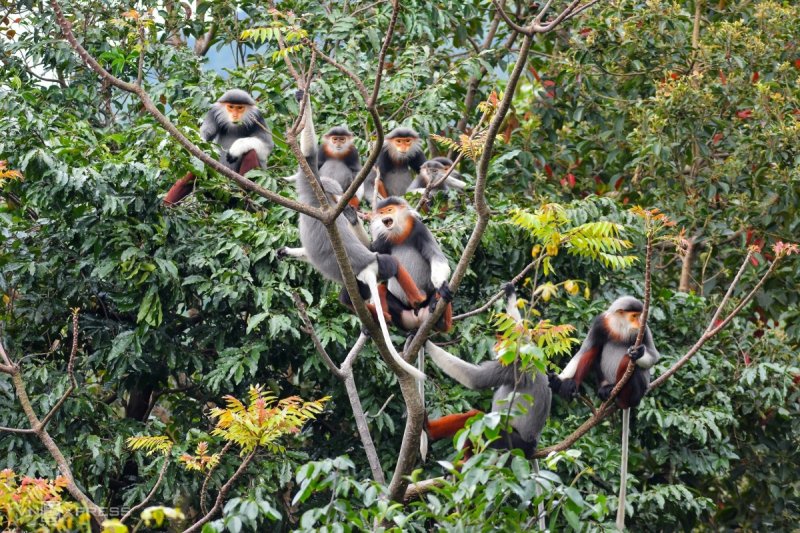 A herd of nine langurs gathered on a beautiful day taken by Mr. Khanh in February 2018. One of Khanh’s most beautiful and memorable memories when photographing this rare primate on the 5th day of Tet 2018.

“The natural herd of langurs, seemingly unconcerned with the appearance of humans, were at first one, three, nine, and then gradually the others joined the herd to 12, a sight of luck only. We just met and we just shot and forgot about lunch. It was really interesting.” 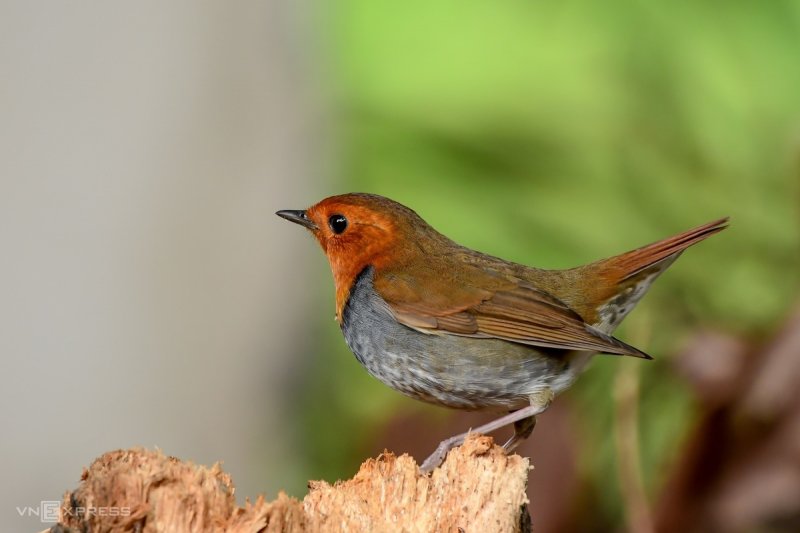 Khanh has captured about 70 species of wildlife on Son Tra, capturing their moments, dances, and behaviors. One of the cute migratory birds is the Japanese red-faced bird, which is about 15 cm in size, with the male having a prominent orange head and chest. This bird rarely returns to Da Nang, the most recent time being in December 2019. 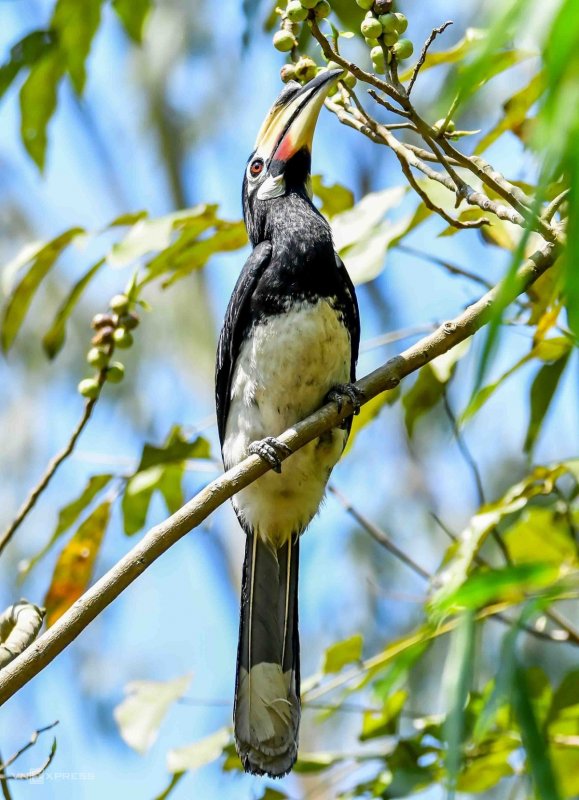 The bird system in Son Tra is diverse, ranging from settled species such as kingfishers, honey suckers, pheasants, wild chickens, waterfowl, nightingales, nightingales, and mollusks, to migratory species such as mountain geese, swans Japanese red, blue-backed, or oriental high-sand tail (photo). Mr. Khanh shared that the oriental sand bird, a small hornbill bird in Asia, rarely returns to Son Tra, recorded it in 2019 and has not yet returned. 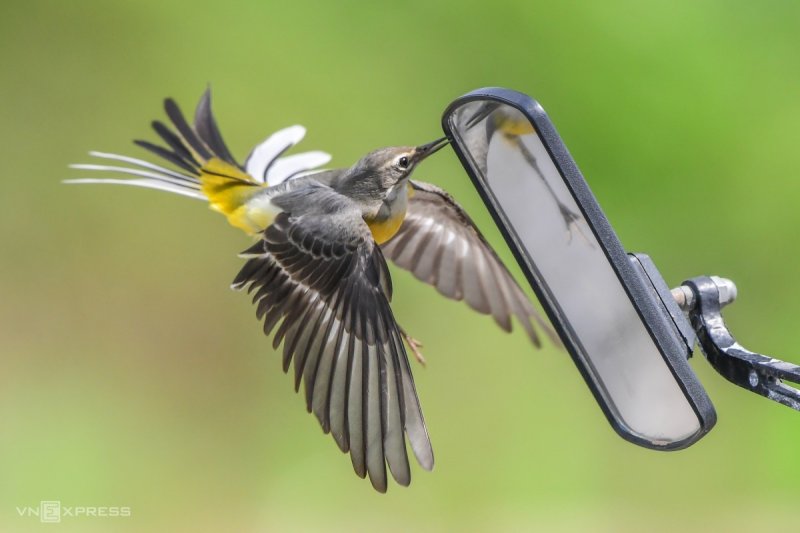 The mountain magpie, a relatively common winter migratory species, usually lives in various open areas such as forest edges, frequently feeding along flowing streams. One of the most wonderful moments in Son Tra is the mountain magpie pecking at the motorbike window when he sees his image in the mirror. 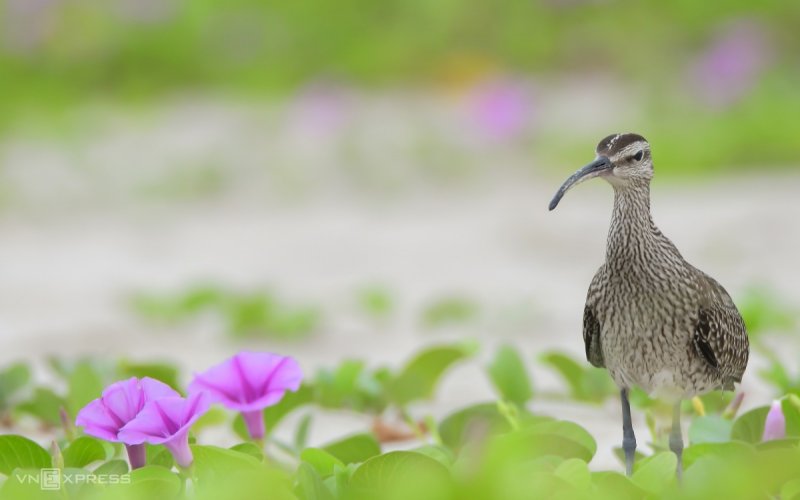 In Da Nang, during the bird migration season, birds such as the baby stilts (pictured) or the stilts often feed on the waters at the foot of the Son Tra peninsula and become “supermodels” hunted by many photographers. pick up. 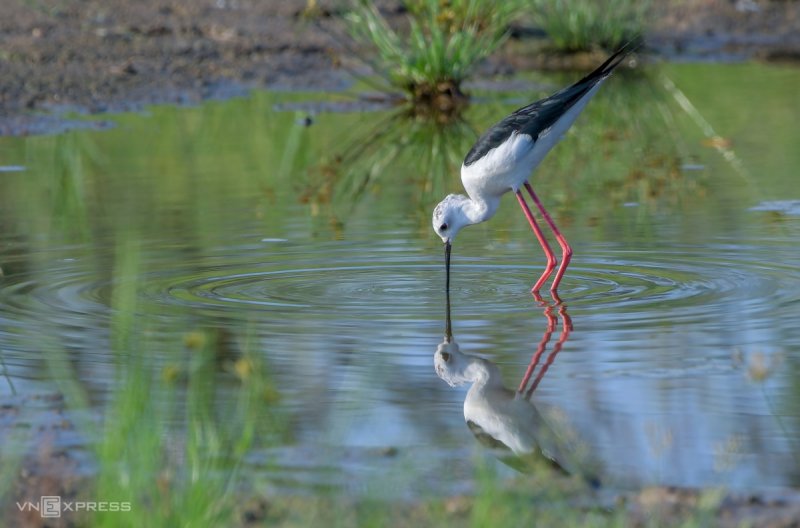 In order to capture the stilts species, he must determine the habits of foraging, sometimes Mr. Khanh has to go from late at night before the sun comes up, soak in the water, cover the net and leaves to camouflage, wait for it to come back to feed, just press the button. machine.

Son Tra’s love for nature seems to seep into me since I was a child, in the times I went out with friends, camping in the mountains, and later in middle age, I really felt that Son Tra was an indispensable part of me. lacking in life”, Mr. Khanh confided. Follow vnexpress