Referring to Lang Son, surely everyone remembers the sentence “Dong Dang has Ky Lua street / There is To Thi, there is Tam Thanh pagoda” with places that are all destinations that tourists have been interested in for a long time. Recently, Lang land also attracts tourists to watch the snow and ice in winter at the top of Mau Son. Containing many anecdotes, as well as being known for having a harsh climate in the winter, for many people, Mau Son is a place that is “challenging” just hearing about it.

In the Mau Son population, Phia Po, also known as the top of Nui Cha, is the highest with 1,541 m. This is a new trekking site with many tourists, so it keeps its wild beauty. The altitude is not too great, but the road is dangerous and diverse, so Phia Po is considered a relatively difficult trekking route. Excitement, admiration, fear, and self-conquest are emotions when conquering “mountain Everest in Lang”. 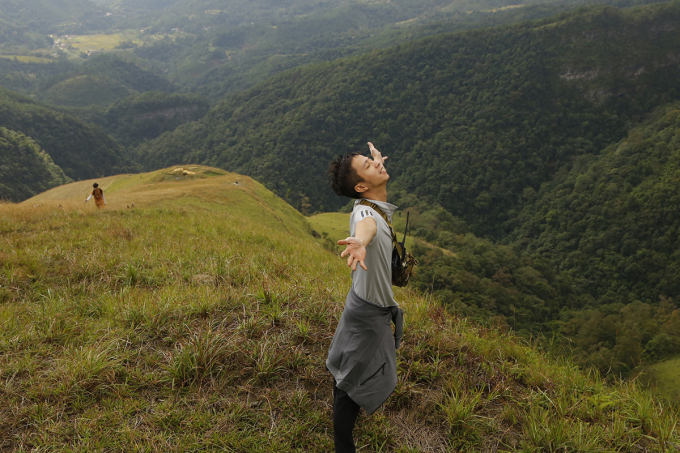 The weather was favorable as the group departed from the foot of the mountain at 8am. No sun, no rain, cold weather. About 40 people, everyone was excited and excited because they had previously admired the beautiful photos on the way to the top of Phia Po.

The trekking tour welcomes visitors with the first terrain of an old forest and a shallow stream. The landscape here is not unique and the terrain is quite slippery, so if you are not patient and eager enough, you will easily get bored from this stage. After more than an hour, the group passed the old forest and the scene changed 180 degrees: a steppe as far as the eye could see began to emerge. Some in the group exclaimed: “It looks like Switzerland!”.

The beautiful scenery makes people seem to forget their fatigue and climb quickly to reach a large lawn, which is also the first stop. This stage is the most relaxing moment for the whole group when just raising the camera to take a good photo. In the early winter, the climate here is cool and pleasant, it is not sunny, so no one feels tired. From here, looking down, you can see the town and admire the height that the group has conquered, making everyone excited to move on. What makes the route to the top of Phia Po special is this green steppe, which looks like the mountainous terrain of temperate countries.

After resting and crossing the green steppe, the dew began to come, making the scene start to become more mysterious. The porters briskly led the way, constantly talking about what the group was about to climb. Those are two narrow roads connecting each other. The abyss on either side, shrouded in mist, made them like a path above the clouds. Locals call these two giant dinosaur spines. The rocks lay in the middle of the path like the bones of their spines. The story and the scenery add to the excitement of the imaginative visitor. 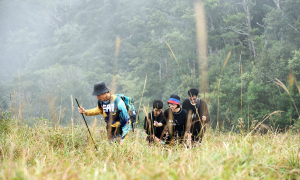 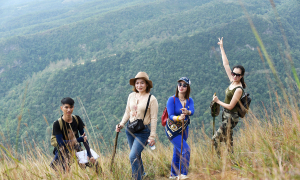 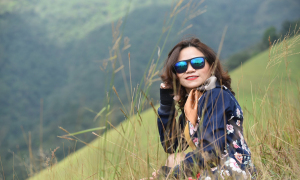 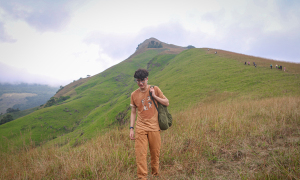 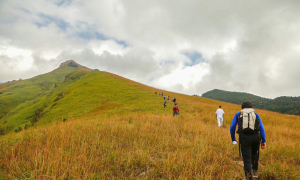 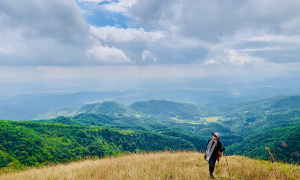 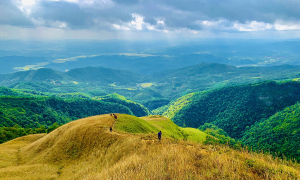 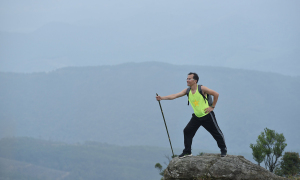 Quiet primeval forests and steep slopes await the group after crossing the giant dinosaur’s spine. The slope was getting higher and higher, people started to have to cling to bamboo branches on both sides of the road to help. Dense trees cover most of the sunlight and even sudden rains. Space is like going back to the past when we step on the forest that is thousands of years old. If you are lucky enough to go in April, you can admire the bright, beautiful blooming azaleas.

From here, fear begins to appear, starting with the saying of a woman in the group: “I have never felt so brave!”. That’s when you have to cling to bamboo branches and grass branches on both sides of the road to help pull your body up. Sometimes, accidentally touching the thorny branches, even though it hurts because of the scratches, the feet still urge to move on. Squeezed, hungry forest mosquitoes can come at any time. However, without a single complaint, everyone tried to overcome their fear to conquer themselves. 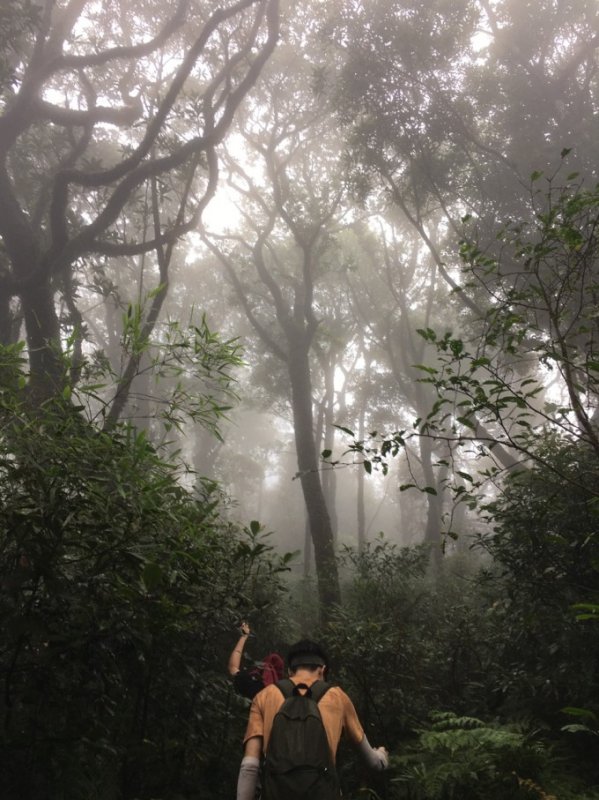 Visitors must pass through a mysterious primeval forest to reach the top of the mountain. Photo: Xuan Phuong

The final challenge for visitors is a vertical cliff, must swing to pass. Many people stop here, but those who pass will fight for themselves, only about half an hour left to reach the top.

When climbing Phia Po, there will be many passages where you will be “tricked”. Seeing the top of the mountain in front of everyone, everyone thought that they had reached their destination. After all, they had to cross 3 peaks to reach the highest peak. The group reached the landmark when the clouds covered the top of the mountain. As rumored, the Mau Son wind blew cold and numb. All fatigue, fear immediately disappear when your hand reaches the top. Right here, you have overcome many people, won yourself to stand at the highest level of Lang Son – the land of legends.

However, do not fall asleep before the victory. A distance of 7 km with difficult terrain is still waiting for the group to climb down. Try to cross the primeval forest so that even if it’s dark, the steppe hills are much less scary. 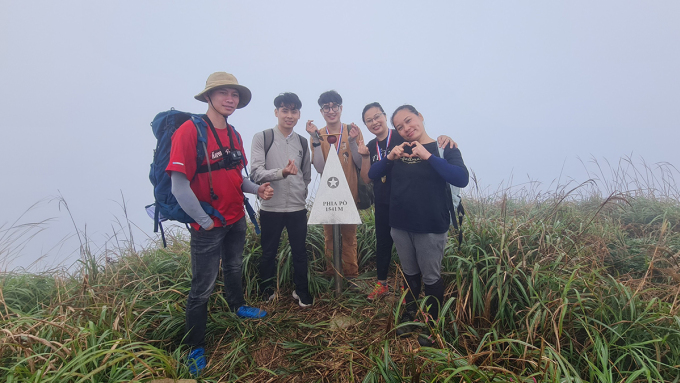 The moment of reaching “Mount Everest” in Lang. Photo: The Hung

Visitors who register for a tour to conquer Phia Po peak will be able to visit scenic spots such as Phai Ve flagpole, Mac citadel, shop at Dong Kinh market… and be given many souvenirs. Expected tour price is 2,390,000 million to 2,690,000 million VND/pax for a 3-day 2 night itinerary. The journey to conquer Phia Po Peak is within the framework of Fam trip – Caravan and Trekking – Food Festival “Lang Son – Going to Remember” organized by Five Star Travel and Trading Co., Ltd (Fivestar Travel) and Trong Tin Group Co., Ltd. organization. Follow vnexpress