THANH HOA – On the afternoon of the first day of October, Ha Van Sanh put on a sling across his back and flew up to the edge of the forest, more than an hour later, he returned with a basket full of honey.

At nightfall, Chieng Ma (Dien Thuong commune, Ba Thuoc district) picked up a piece of honey from the forest. The honey hunter’s shirt was soaked with sweat.

“Today, just climbing two nests, I earned a few liters of honey,” Sanh said loudly to a group of people in Chieng Ma village who were building a house to look after cornfields along the road. Lowering the skewer to the ground, Sanh grabbed a sharp jungle knife to cut a honeycomb full of honey and give each person a piece. No matter where the blade cuts, the layer of honey breaks up there, yellow, rich in the scent of forest flowers. 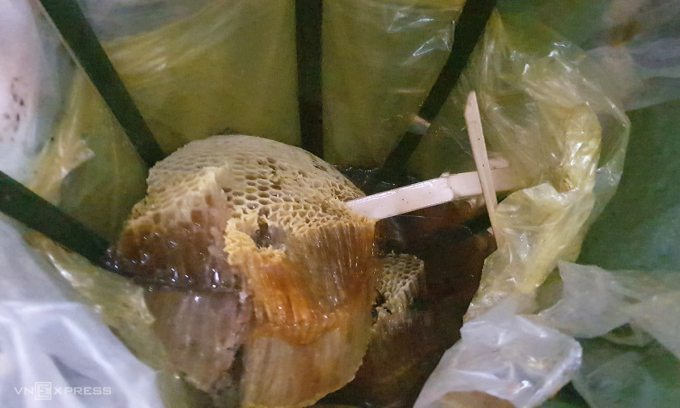 The honey pot was full after half an afternoon of going to the forest by Mr. Ha Van Sanh. Photo: Le Hoang.

“Please give me another piece of honey to bring back to the kids at home,” said a middle-aged woman as she finished eating a piece of honey. Mr. Sanh pulled out a knife and cut for this woman a big chunk of honey the size of two hands.

The main inhabitants of Chieng Ma village are Thai people. Hundreds of roofs are located in the middle of the valley, surrounded by undulating mountains. People make a living by shifting cultivation, planting forests, and one-crop wet rice. This area still has few regenerated natural forests, so there are many products such as bamboo shoots, stone snails, sloth crabs, and famously known as wild honey. 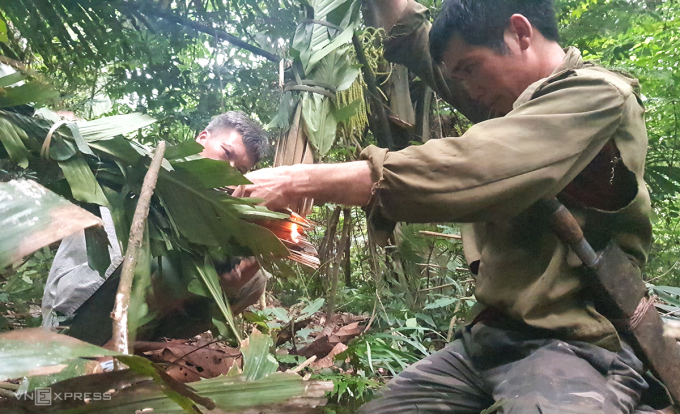 Bee hunter Ha Van Sanh builds a fire and prepares to climb to the top of the tree to get honey. Photo: Le Hoang

The season for collecting wild honey in Chieng Ma usually has two crops a year, between spring and autumn – the time when wildflowers bloom. Mr. Ha Van Sanh is 40 years old this year, more than 20 years in the profession of hunting wild honey. People with long experience in the profession like him usually do not spend a lot of time searching to know where the honey bee swarm resides.

“I often look at bees from the direction they are looking for flowers to get honey, I will see its nest not far away,” said Mr. Sanh. The distance from the hive to the place where the bee is looking for honey is usually less than a kilometer. From the beginning of October until now, Mr. Sanh has found dozens of large beehives on Thung Chan hill and nearby mountains.

In Dien Thuong commune, there are about a dozen longtime honey hunters. Their tools include a honey skewer, a knife, and a lighter. When finding a stump with a honeycomb, the worker will use a knife to gather dry forest leaves and roll them into a pile of tinder and then light a fire. The pile of tinder must be tightly braided, adding a few fresh leaves to create smoke, causing the bees to leave the hive. The hive is usually located on the tops of trees nearly 20 meters above the ground. After locating the hive, the worker hangs it up and blows the smoke away from the bees, then pokes his hand to cut each honey-filled wax bubble. This whole process takes about ten minutes. They said, “must act as quickly as possible because if you stay on the tree for too long, the bees will find that the nest has been lost and will attack again, which is very dangerous”.

Bee hunters in the western districts of Thanh Hoa mostly do not wear protective gear, so being stung by bees is a common occurrence. “Many people fell from trees because the bee sting was so painful. I was also once attacked by a swarm of bees, came home with a fever, and had to go to the commune health station for treatment,” said Mr. Ha Van Sanh.

According to experience, workers do not take all the hives but leave a part for them to continue to reproduce and build the nest to make honey again. Each honey season, a worker in Dien Thuong commune can earn 70-80 liters of honey, selling from 15-20 million VND.

In recent years, due to the situation of slash-and-burn cultivation and deforestation, bees are less likely to return to their nest than before. However, honey hunters in Chieng Ma never compete with each other. They have a convention, whenever the stump is marked by a knife with a special symbol, that is, the owner has foreseen it, the other person who comes later will not touch it anymore.

On a small stilt house nestled on the hillside, before dinner, Mr. Sanh taught his 17-year-old son how to squeeze a beeswax cake. Each pot of thick, golden honey in turn is filtered through the curtain and poured into the bottle. “Thanks to my job of hunting honey in my leisure time, I help my wife raise two children to study,” he said. Follow vnexpress