Photographer Huynh Phuc Hau is a lover of An Giang in every flood season with simple pictures like a country painting. 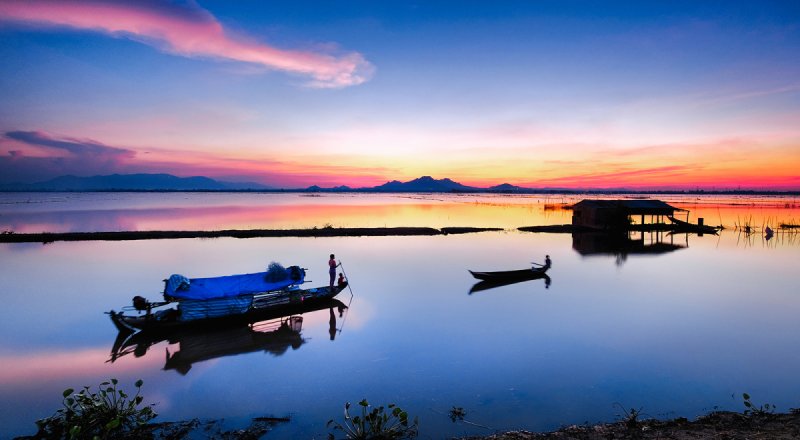 Huynh Phuc Hau, born in 1966, is a photographer born and raised in Chau Doc, An Giang. In addition to his passion for photography, he also works at the Department of Diagnostic Imaging, An Giang General Hospital. He received the title of Vietnamese photographic artist in 2009. In 2016 he held a solo exhibition in An Giang in the floating season.

The series of photos below have been taken by him for many years, introducing readers to the beauty of vast fields of water, mainly in Chau Doc and Tinh Bien areas of An Giang province because there may not be many more in the future. . 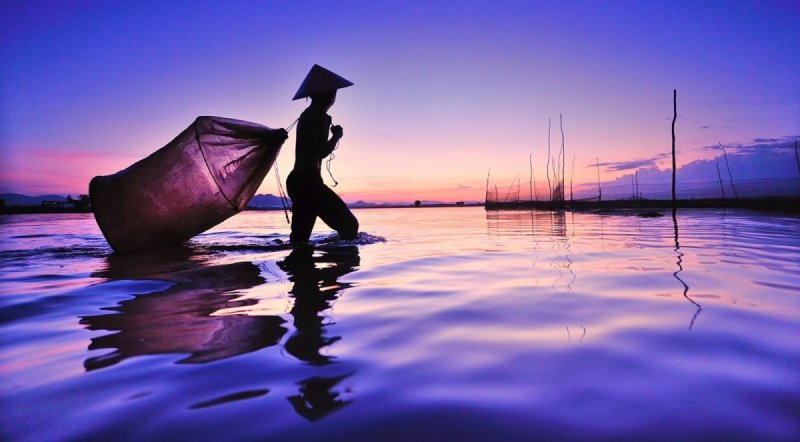 An Giang welcomes floods from upstream of the Mekong River. Floodwaters bring schools of fish and shrimp to live in the fields, which is an ideal time for people to fish. In the photo, the boy goes fishing in the brilliant sunset at Tha La, Vinh Te, Chau Doc. 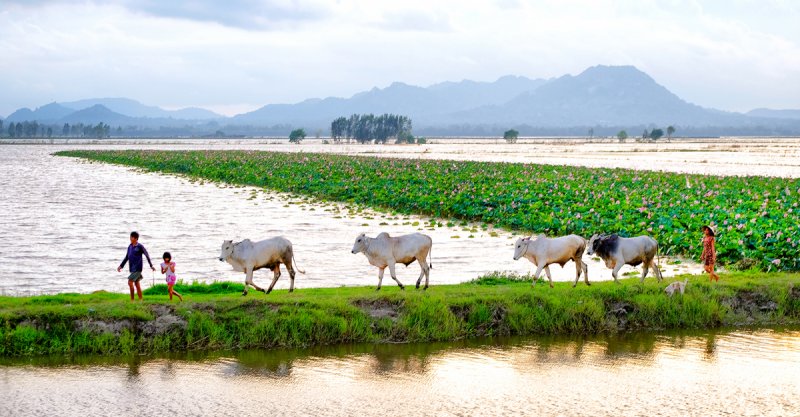 The cows go back on the bank of Tha La canal, Chau Doc. At this time, the Tha La dam has not released flood, so the water is only flooded to the foot of the field. An Giang also has a very famous Bay Nui bull racing festival, which usually takes place from August 29 to September 1 of the lunar calendar, but has not been held for 2 years because of Covid-19. 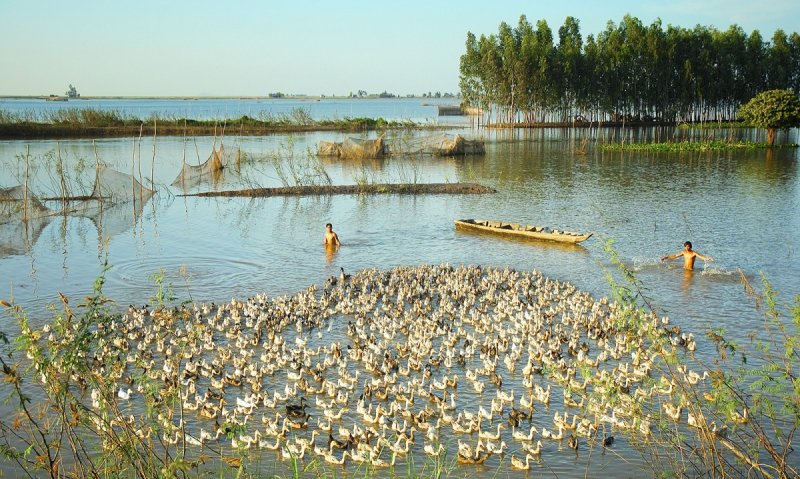 Herding ducks in the flood plains in Nhon Hung, Tinh Bien. Floods accumulate alluvium, wash away the acid soil layer, while the remaining rice grains in the field after the harvest and snails are a rich source of food for ducks, so people save food for them. they. 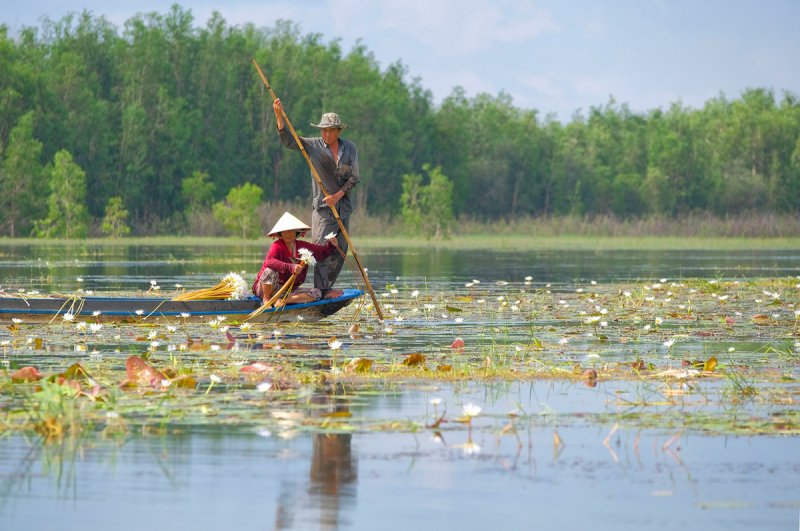 The author shared, each composed photo is a story and leaves many emotions. In the photo is a couple picking ghost water lily in Vinh Te, Chau Doc, bordering Cambodia. From early in the morning, they move by motorboat to carry far away fields to pick flowers until the boat is full and sell more than 100,000 VND/day.

Ghost water lily or rice water lily are gifts of nature bestowed on poor Khmer people in An Giang. This type of water lily only grows in perennial wetlands, usually with 2-5 m long stalks and white and purple flowers. 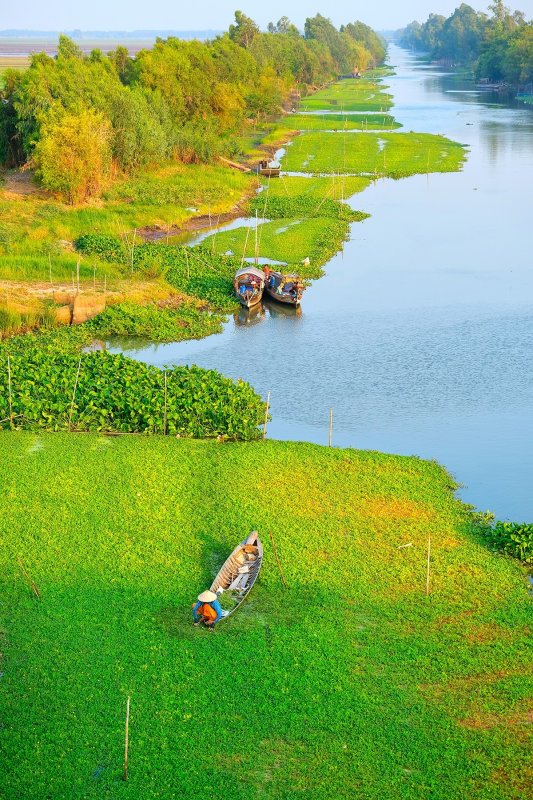 Field vegetables are considered a specialty of the West, including water lily, dandelion, water chives and spinach (pictured) contributing to the income of the people. The photo was taken on a sunny afternoon on Tra Su canal, Nhon Hung, Tinh Bien.

Spinach belongs to aquatic species, small leaves, soft stems, fast-growing, water up to where the vegetables float. When you touch it, the leaves will retract. After picking off the leaves, the young stalks are used as clean vegetables, cooked in sour soup, dipped in a hot pot, or eaten raw with braised fish sauce and braised fish. 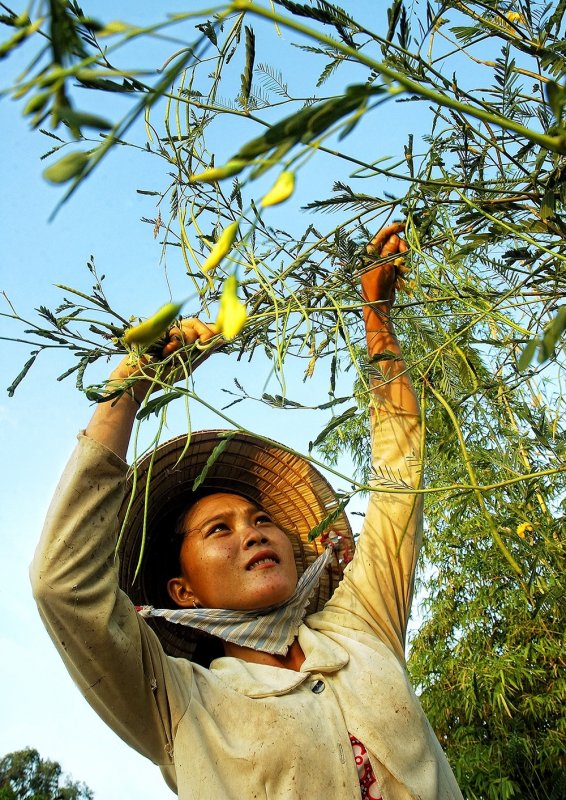 Village women picking wildflowers along the banks of Vinh Te canal, Chau Doc. In each crazy season, people will sail to each shore to pick vegetables to eat in each meal with dishes such as making pickles, cooking sour soup, making salad, stir-frying with copper shrimp, or eating raw fish dipped in braised fish. 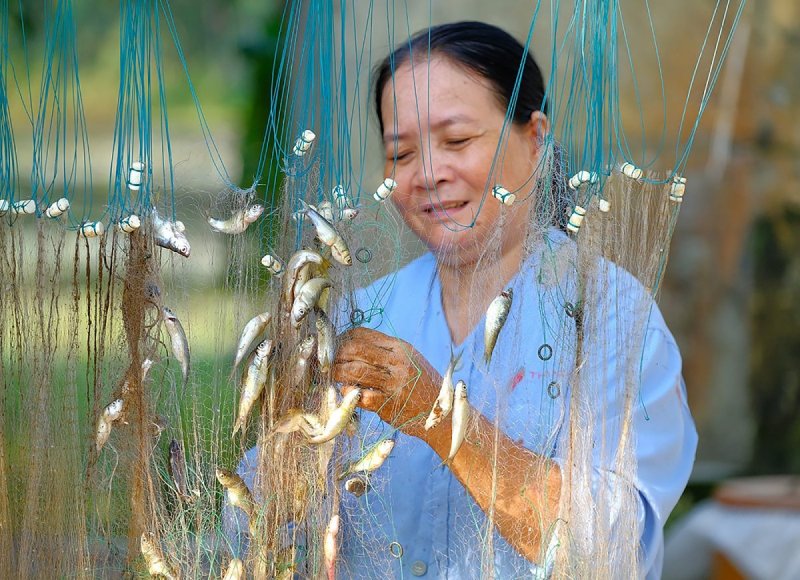 In particular, when the dandelion flower blooms brightly, it is also the time when the spirit fish follow the flood water to pour into the rivers and ponds. The young reishi at the beginning of the season are made with vinegar, and the reishi at the end of the season when they have grown up, they make fish sauce.

“If you go to An Giang floating water, but you can’t eat the spirit fish, you have not come yet. In the cold weather from the north wind blowing, the image of water overflowing the fields and enjoying the delicious dishes from reishi fish and wild bougainvillea brings an unforgettable taste,” the photographer said. 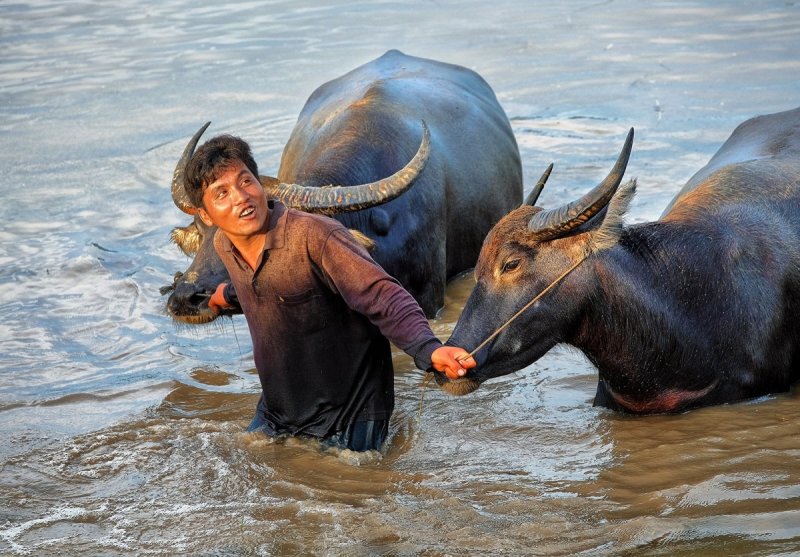 The photo was taken when the man drove the buffalo through the Vinh Te canal to reach the high ground with lots of grass that has not been flooded to feed the buffalo, and in the afternoon, he brought the buffalo back. The photo reminds the photographer of the movie “The season of buffalo wool” with scenes shot in An Giang by director Nguyen Vo Nghiem Minh premiered in 2004. 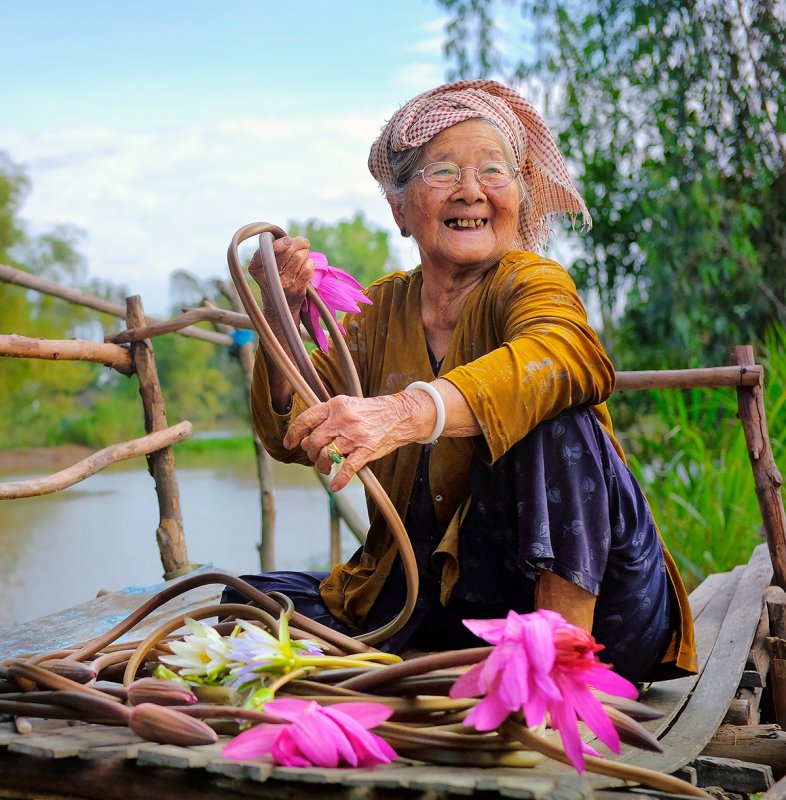 In his photo-writing trips, the photo that left him the most emotions was “An Giang’s mother” which is a bunch of water lilies on the banks of Vinh Te canal. “When I was passing by the canal, I saw a beautiful old woman with a bright smile next to the water lilies, so I stopped to ask for a photo. A month later, when I returned to give her a photo, I learned that she had passed away,” the author said. 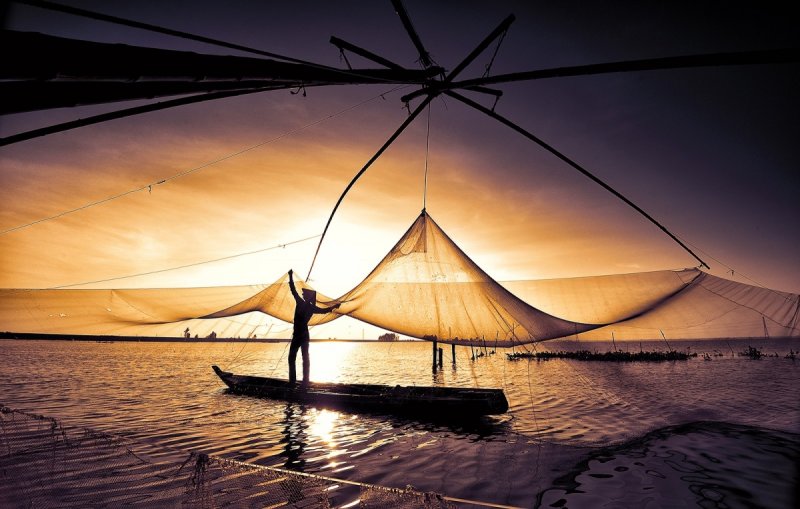 The “dance” taking off at sunset on Tha La flooded fields creates a unique picture of nature. Every day the sky at sunrise or sunset has different colors and does not overlap. 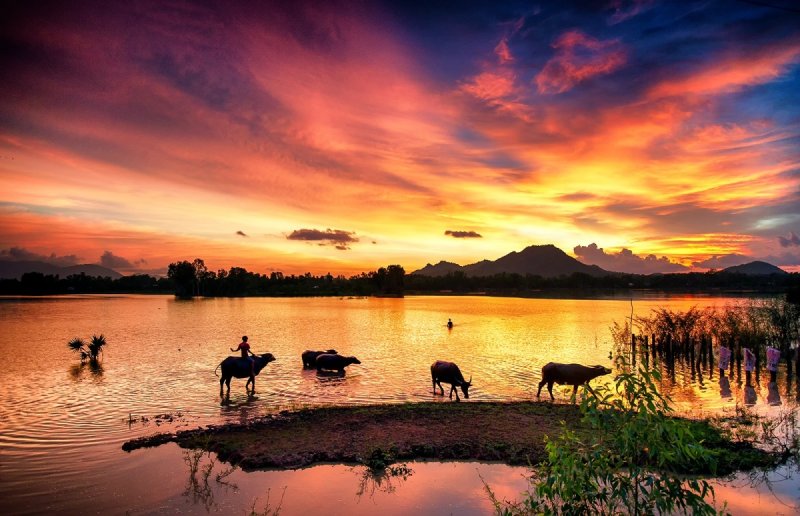 Peaceful afternoon in the fields of Tra Su and Tinh Bien. According to photographer Huynh Phuc Hau, the floating season is part of life. In the 2000s, floods flooded the fields, usually, by the end of November, the water would recede, the picture of life in the flood season was very bustling.

However, gradually the flood season is only in memory, like last year, the flood came backless with Covid-19 so he did not take pictures. This year, early October, but the flood has not yet returned, the water level has not yet flooded the fields on the Cambodian border, and he is still waiting for the flood to return. Follow vnexpress