The preservation and promotion of the national cultural values ​​of places such as the relic of the Tien Lang Son Pagoda are increasingly being focused on. Tien Pagoda – Fairy Well in Lang Son in 1992 was decided by the Ministry of Culture, Sports and Tourism to be classified as a national relic in order to preserve the culture and natural beauty of this place. Let’s explore the special features of this destination!

Geographical location of the relics of Tien Lang Son pagoda

The ruins of Tien Lang Son Pagoda, also known as Song Tien Pagoda. The pagoda is located in the heart of Dai Tuong mountain, Hoang Hoa Tham street, in the territory of Chi Lang ward, Lang Son. The location is about 500m from the Ky Cung bridge. This is a place containing many rich and special cultural and religious values. With folk stories and ancient statues imbued with national culture. 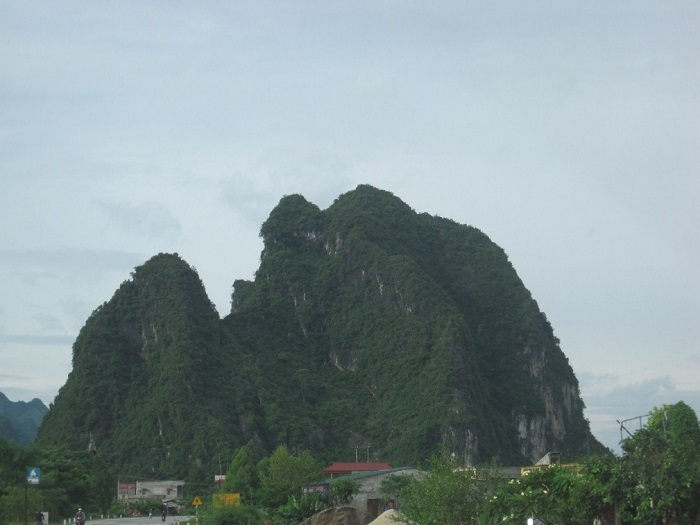 According to historical records in “Dai Nam Nhat Thong Chi”, Tien Pagoda is a temple established with the name Song Tien Tu. The pagoda is located on the slopes of Deo Giang mountain, but because it was damaged and degraded, it was moved to Song Tien cave about 200m away. The pagoda was established during the reign of Le Hong Duc. This place contains many folk beliefs worshiping national heroes, fairies and Holy Mother. 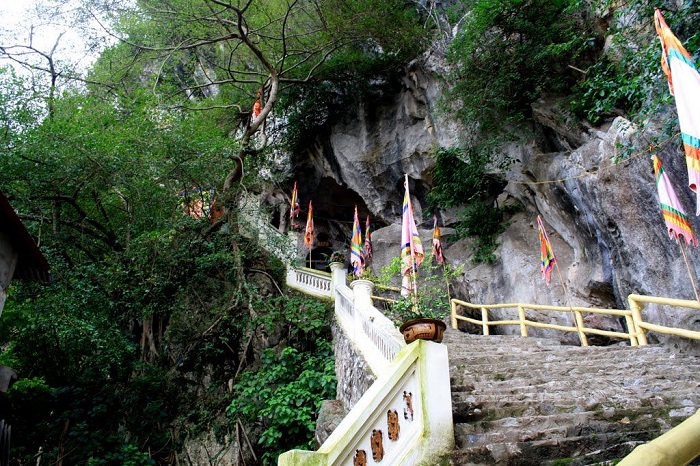 The entrance to Tien Pagoda follows each stone step

In addition to the above historical records. According to the people here, the birth of the Tien Pagoda relic is also associated with an extremely interesting dictionary. It is said that there was an Ong Tien who lived in the mountains and was often given a small portion of rice by the buffalo children in the village. He stepped on the rocky mountain and turned it into a Fairy Well. Grant the villagers of Phai Luong clear water. Help the villagers in the days of lack of rain and drought. This is a folk legend kept by the villagers until now. 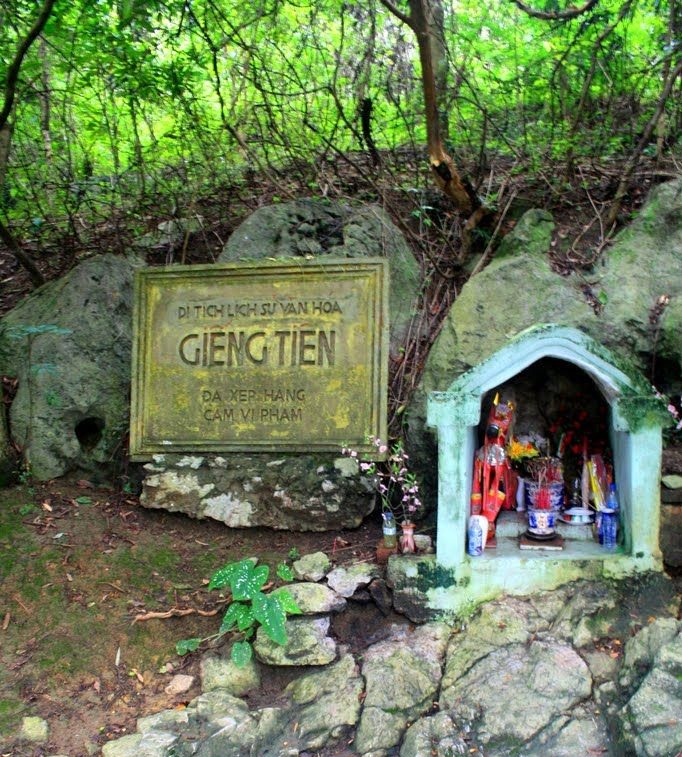 Fairy well relic with clear water for many generations

Tien Lang Son pagoda is a historical and cultural tourist attraction attracting tourists from all over the world. The pagoda has a very unique architecture located deep in the rock cave. Tien cave is not located close to the foot of Dai Tuong mountain like other temples of Lang Son. Want to go to the cave to visit the temple. You have to pass more than 65 meandering stone steps. The stone steps are built with handrails and are not slippery, quite easy to walk. Helping tourists can easily move up to visit the temple. 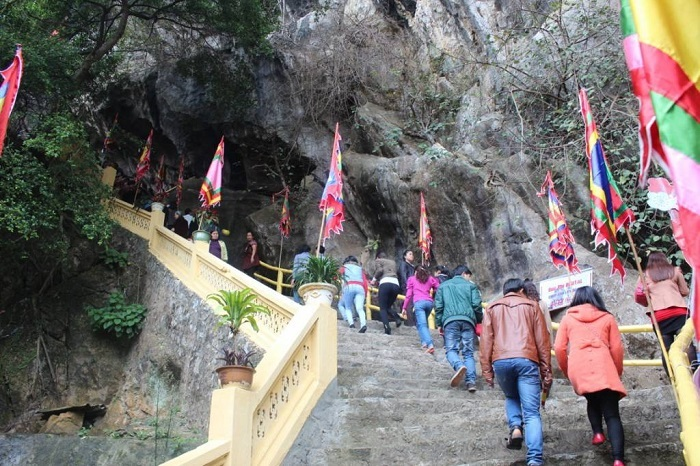 65 stone steps leading to the spiritual temple of Lang

The relics of the Tien Lang Son pagoda include extremely magnificent and beautiful stalactites with stalactites in vivid shapes. You can easily imagine the image of a fairy, a lion’s head, a bat… quite unique and interesting. It can be said that this is a very special cave space. Both sacred and mysterious, wild and beautiful. 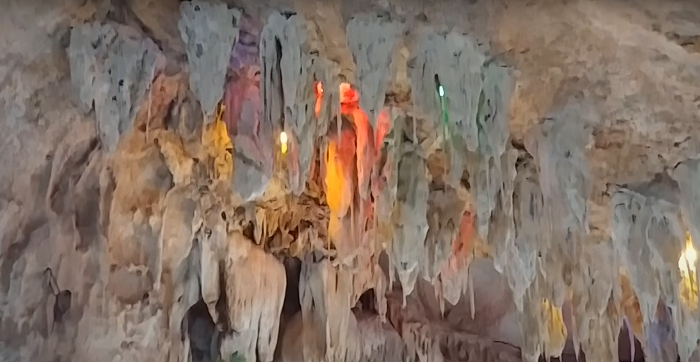 The system of stalactites is extremely vivid inside the cave

Tien Pagoda belongs to the Bac Tong (Mahayana) sect. The temple worships Fairy, Mother Goddess, and national heroes. With the desire to express gratitude to the fairies, saints and heroes. Hope to protect the lives of the villagers always in peace. 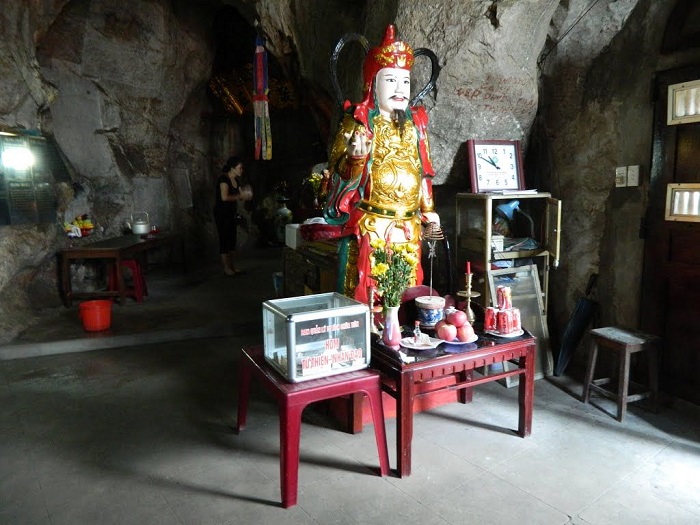 At present , Lang Son Tien Pagoda still retains many ancient artifacts of high artistic value. These are dharma statues, couplets and stele. People in ancient times used 13 steles carved on the cliffs of mandarins of many dynasties. The most special is the stele engraved with the song “Tran Doanh eight scenes” by Ngo Thi Si. The poem praises the beauty of 8 Lang Son landmarks, including Tien Pagoda.

In addition to its historical value, the Tien Lang Son pagoda is also famous for the Tien Pagoda festival which takes place on January 18 every year. According to statistics of the management of the relic site in 2019 alone, the pagoda has welcomed more than 2 million visitors to visit and give thanksgiving. Fairy Pagoda Festival has a large scale, with the participation of a large number of ethnic minorities. Folk games such as lion dance, human chess, Sli singing, glider … are held very lively and unique to attract a large number of tourists. This is also an opportunity for the descendants of Lang and tourists to gather to worship. Together, we offer incense to show our gratitude to saints, fairies, and heroes. Wishing you good fortune, luck, and peace. 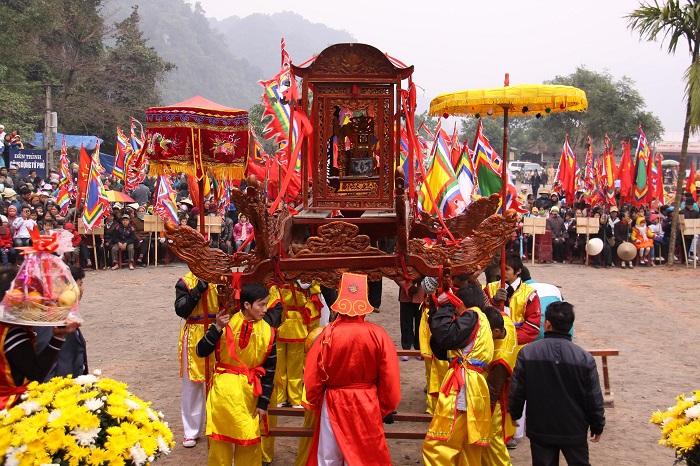 A palanquin procession in a traditional festival at Tien Pagoda

Lang Son Tien Pagoda is still annually cared for and embellished by the leaders of Lang Son province and the state. To preserve the magnificent natural landscapes and ethnic cultural features of the pagoda. Contributing to preserving and preserving national quintessential values ​​for future generations. To forever continue the national spirit and culture bold Vietnamese people. In addition to Tam Thanh – Nhi Thanh cave, Tien Pagoda remains a tourist attraction of the province.