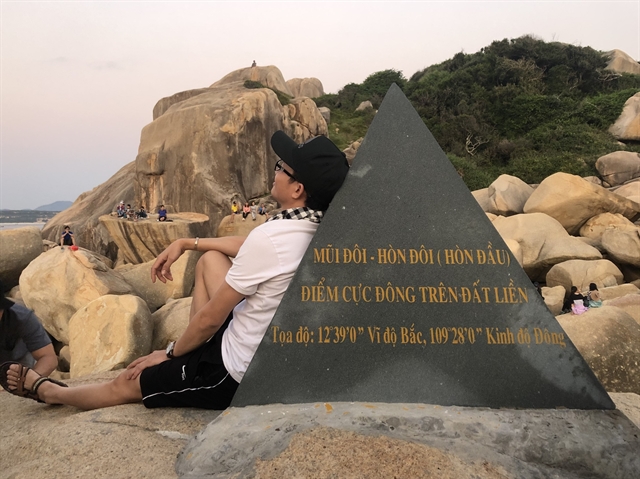 Conquering Đoi Cape is a proud moment for visitors, who takes a rest at the easternmost mainland landmark. — Photo gody.vn

Referring to the central province of Khanh Hòa, people often think of Nha Trang, but few people know that there is also a place with blue sea, white sand, golden sunshine with diverse landscapes. That is Mũi Đoi (Cape Đoi), the first sunrise viewing spot on the mainland.

Cape Đoi is also known as Cape Ba Dầu. It's called Cape Đoi because at one location there are two rocky outcrops jutting out into the East Sea.

According to the Department of Culture and Sports of Khanh Hòa Province, Cape Đoi is the easternmost point of the country, the place to receive the first sunlight on the mainland of Viet Nam. Since 2005, the Ministry of Culture, Sports and Tourism has recognised the cape as a national scenic spot.

However, it is not easy to conquer the cape as backpackers must spend two days undergoing a number of challenges: hiking through sand dunes, trekking through forests and crawling up and down slippery rocks.

We once went to Khanh Hòa before the COVID-19 pandemic. Although it was difficult to reach Cape Đoi, we were very excited to explore it.

We chose the first way. The journey to conquer the easternmost point on the mainland included many emotions, from the first rays of sunlight of a new day, the midday heat of the central region to the shady roads alternating under the forest trees, and ending with the image of seagulls flying over the horizon in the vast blue ocean. It was an extremely interesting and rewarding journey.

Of the four poles of Viet Nam, the westernmost is the most difficult to conquer, the easternmost is ranked second because of its diversified terrain. 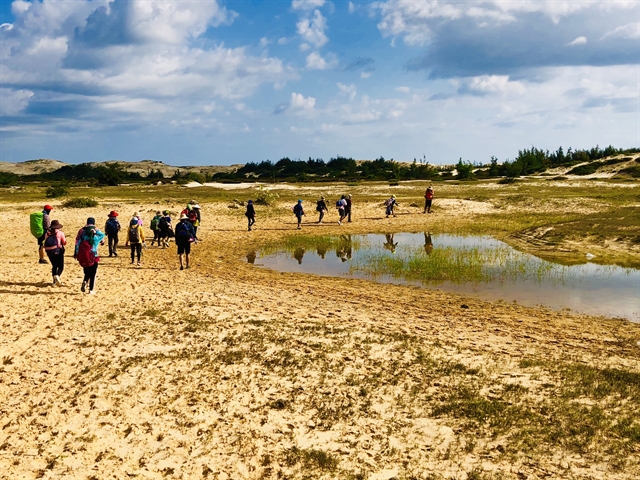 Conquering Cape Đoi  is rather difficult because of its rugged terrain. — Photo gody.vn

The trekking distance from Đầm Mon to Cape Đoi is more than 10km.

Starting to conquer the easternmost point on the mainland was the distance covered with sand as thick as the desert plus the heat of the sea region. It was harsh, but no one complained, just smiled at each other with light pats of encouragement.

At around 8.30am, we were given cool glasses of lime juice, rested lightly and continued our journey through about 4km of semi-desert terrain.

Crossing a very large sand dune about 4km long was rather difficult because walking on sand and severe weather in the central region made people exhausted.

The end of the sandy terrain was a small strait. The clear seawater was a sparkling blue under the golden sun, the water was so clear that we could see everything below. Through about 1km of the coast, we stopped at a house on the roadside, surrounded by many beautiful ripe wild pineapples.

Continuing along the forest slopes with typical shrubs on rocky mountains in the central region, one side was the mountain and the other was the sea. The beautiful scenery across the strait included large and small rocks stacked on top of each other in different shapes and sizes. From the hillside, we saw a charming mountainous area. The waves of the sea kept rumbling rhythmically, eroding the rocky shore. The sea wind was very cool.

We had lunch at Rạng Beach and rested for about 30 minutes before continuing to conquer the easternmost point on the mainland of the country.

The last challenge before touching the easternmost spot was that we had to overcome the 7m rock in front of us.

After great efforts, our reward was the feeling of extreme excitement when touching the easternmost landmark of the country, the place to welcome the first sunrise on the mainland of Viet Nam. 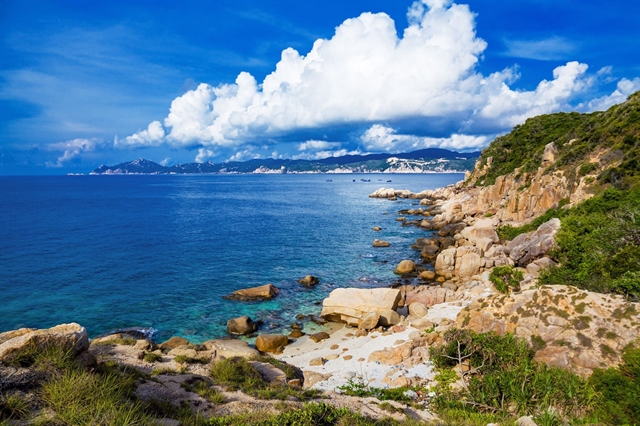