Phu Ly Pagoda is on the list of beautiful temples in Vinh Long because it is a Khmer religious work with the interference between Indian, Thai, and Cambodian architecture, so it is extremely rare.

Where is Phu Ly Pagoda located?

Phu Ly ancient pagoda is located on Highway 54, a section of Dong Thanh commune, Binh Minh district, Vinh Long province. This is one of the ancient letters with a long history of the formation of the Khmer in the South, with unique artistic architecture, harmonious and peaceful landscape. Up to now, the pagoda has been around for nearly 350 years, through many successive generations of monks. 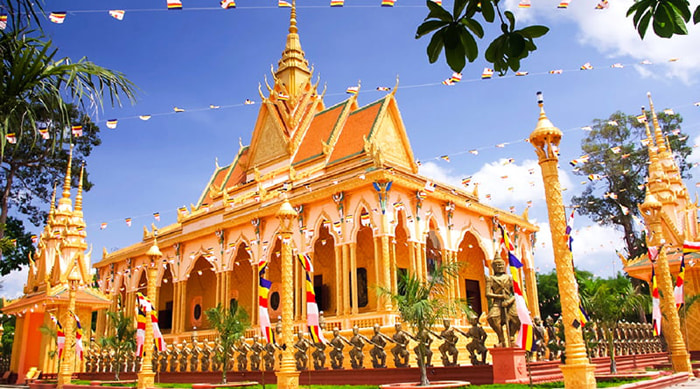 Vinh Long has many famous Khmer temples, which are known by many Buddhists inside and outside the province. Photo: tuilanguoimientay

Although the location of the temple is not prominent because it is hidden deep in the rural area. But Phu Ly’s suicide attracts a lot of Buddhists to pilgrimage. At the same time, this place is also an ideal destination for many tourists. If you have the opportunity to travel to Vinh Long , remember to visit this religious building with ancient and durable features over time, associated with many Khmer cultural and artistic values. 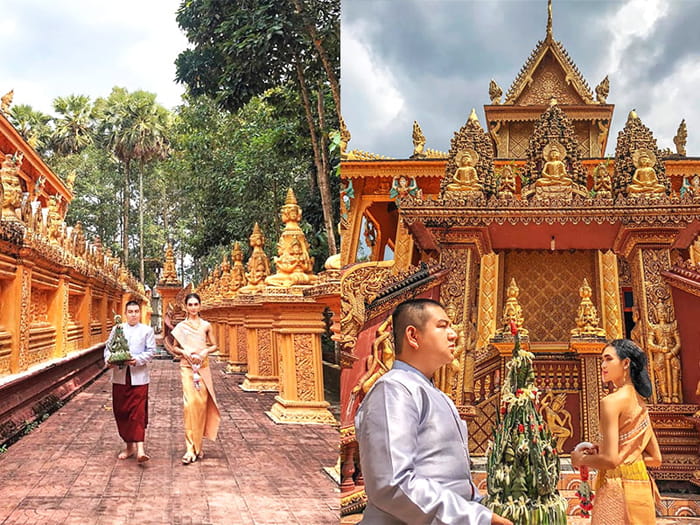 According to many local sources, the pagoda was built between 1672 and 1653 by Khmer people who came to Vinh Long to live and settle down. 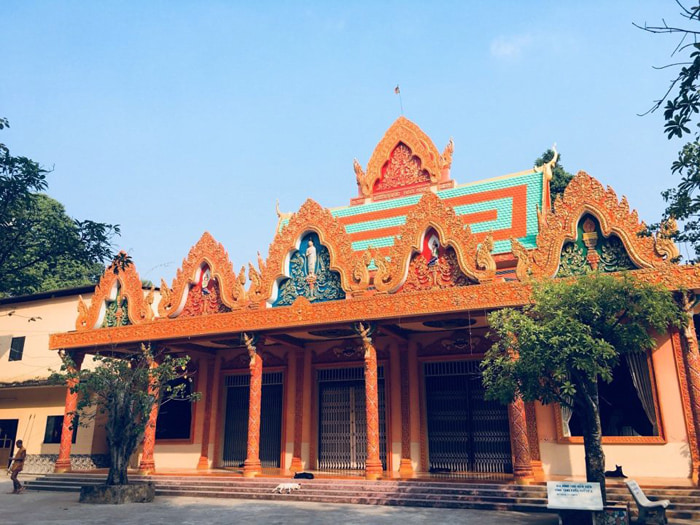 Venerable Son Thang, the deputy abbot of the pagoda, told me that in the past, this place was a desolate land. For many days, tigers, snakes, and other kinds of wild animals harassed many passing by. Therefore, every time there is work over there, people have to go in large groups and at the same time carry weapons to prevent wild animals from attacking. Since the abbots set up their flocks here for three days and three nights, the wild animals have completely avoided and no longer appear. 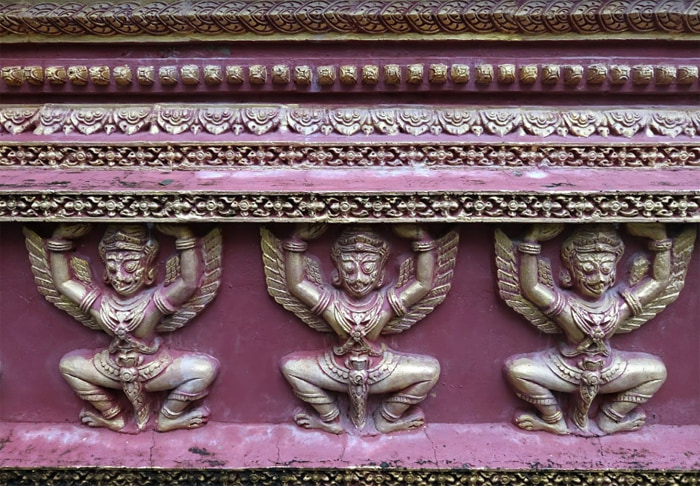 Since its construction, the temple has been nearly 350 years old. Over the years, with the ravages of time, Phu Ly’s ancient temple has been degraded at times but has always been restored in time to protect and maintain its unique architectural, cultural and artistic beauty. Thanks to that, to this day, the temple still retains the ancient and durable features, preserving the majesty, showing the construction imprint of the Khmer people in the South. 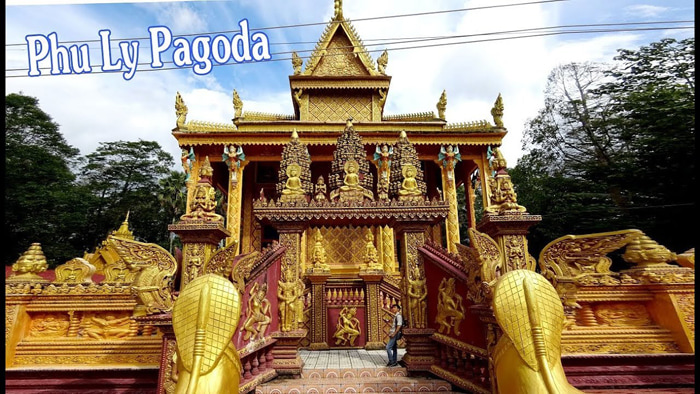 The temple is more than 350 years old. Photo: Phulypagoda

The most recent restoration of the temple was in 2014, with the support of a number of benefactors in the Binh Minh commune. The ancient temple was rebuilt and added a number of items such as the main hall, the main hall, … with a total cost of more than 5 billion VND. Up to now, Khmer Phu Ly pagoda has become an attractive religious work, both with ancient beauty mixed with a bit of modern appearance to attract tourists from near and far to visit. 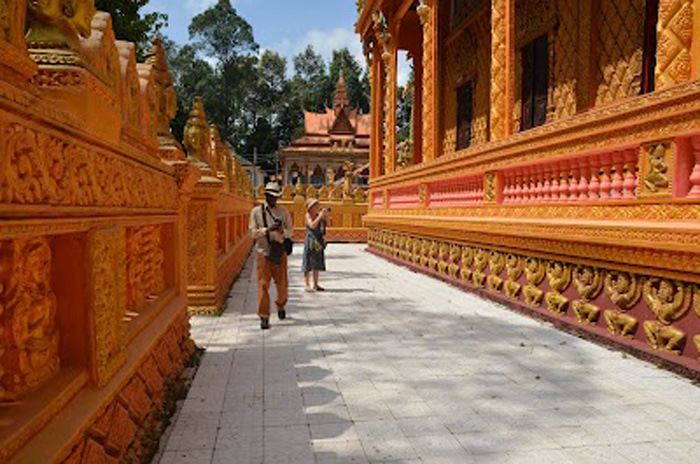 Phu Ly has its own unique architecture because it has a harmonious combination of three construction styles of Thailand, India and Cambodia. Viewed from the outside, the ancient temple includes the main hall area, the meditation area, the guesthouse for Buddhists and pilgrims, the kitchen area,… 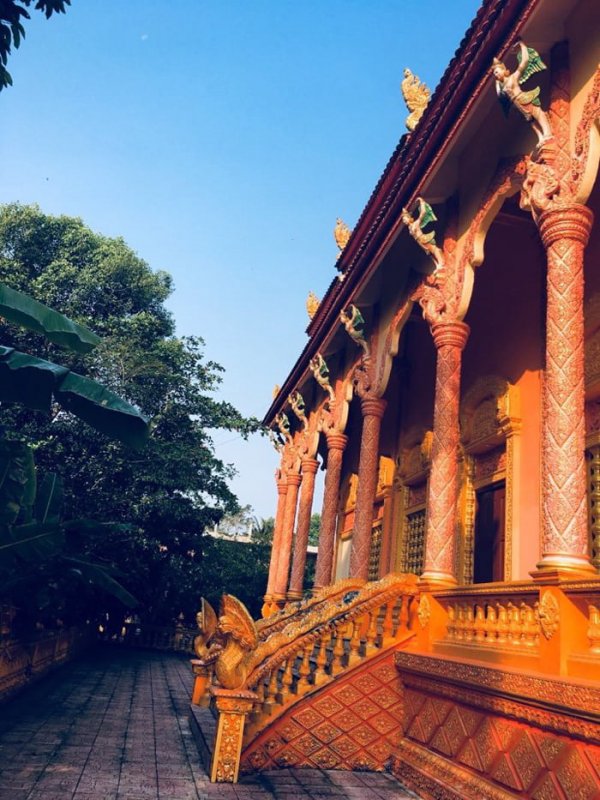 The pagoda is imbued with Khmer architecture and culture with the main wall painted in yellow. The dome is high, built in the typical three-tiered style of the Khmer people in the Southwest Region with the largest bottom fold, then gradually decreasing to the top. The top crease has a triangular shape, the center has a sharp peak soaring up with the highlight of a statue of the goddess Kayno in a rising position to support the roof frill. This detail also creates a transition between the vertical of the pillars and the horizontal of the roof of the pagoda. 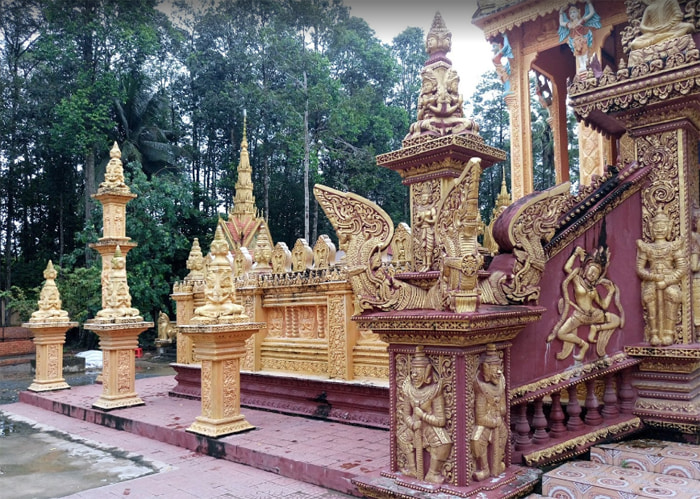 In which, the main hall was built extremely majestically, meticulously and delicately carved. In the shrine of Shakyamuni Buddha and the Arhats. On the wall, there are many paintings recounting the Buddha or the fairy tales of the Khmer. The details on the ceiling are also very impressive. The foundation of the main hall is built high and about 1.5m above the ground.

Besides the main hall, Phu Ly Pagoda also has five buildings that make up the overall structure of the building. It is a place to live, rest and work of monks or Luc Ca,… 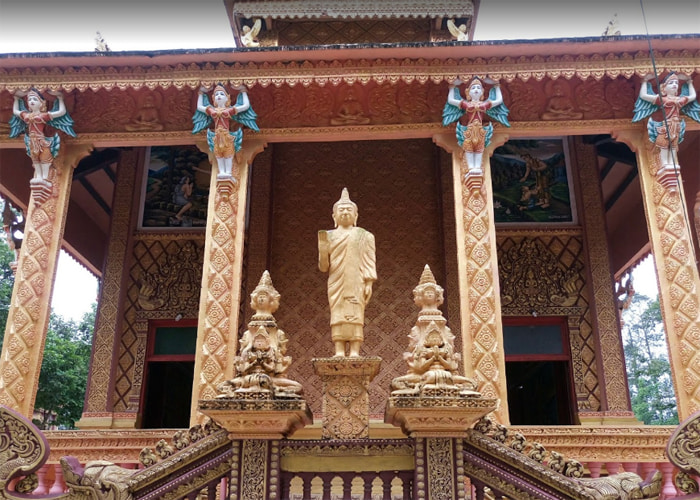 The place of worship of the Khmer since 1672. Photo: Vntrip

Up to the present time, Phu Ly’s ancient pagoda is nearly 350 years old, through many generations of monks and nuns, Buddhists continue to practice here. This Khmer temple is also known by many Buddhists inside and outside the province. Especially on big holidays like the Vo Nam festival and other Khmer New Year holidays, people come to the temple a lot to both visit and make pilgrimages to worship. It can be said that Phu Ly Temple is both a famous tourist destination in Vinh Long and a spiritual work – the convergence of Khmer, Chinese, and Kinh people to visit and celebrate the traditional New Year. 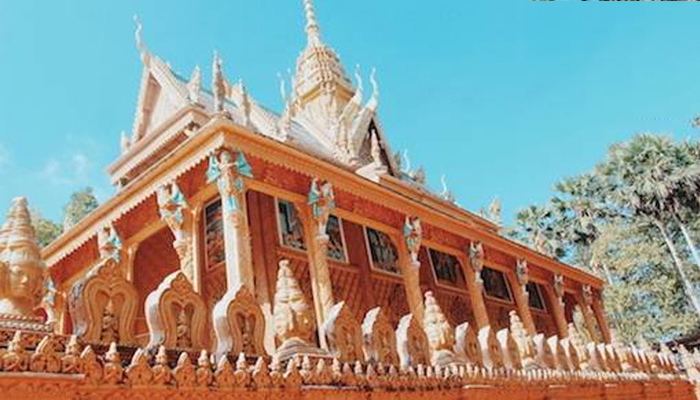 The temple is famous and sacred. Photo: Buddhist channel.

In addition, Phu Ly Pagoda also organizes many Buddhist classes for young monks as well as teaching letters, Khmer, Kinh and social sciences, natural sciences, and Buddhist teachings. many children in the area.

Like other Khmer temples such as Hanh Phuc Tang pagoda, Ky Son pagoda, Phu Ly self also has a spacious and airy space. Around the temple, ancient trees and palm trees are shady, giving off a peaceful and airy look, extremely suitable for walking and resting. Outside the temple grounds is a cremation area that partly meets the needs of the deceased’s burial for nearby households. 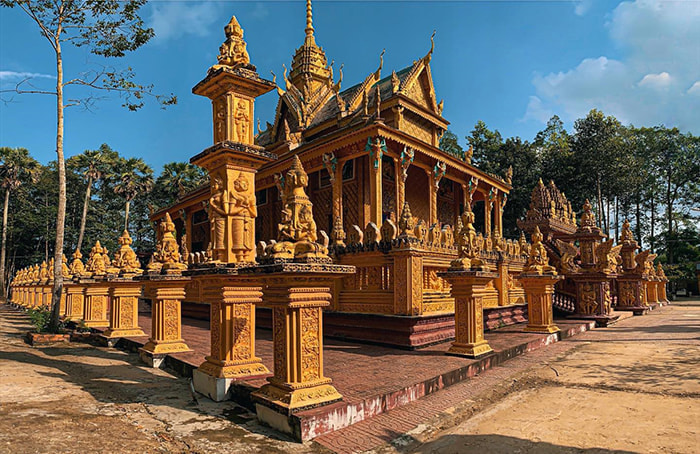 The campus is quite spacious, in the palace there are many Buddha images. Photo: thamhiemmekong

Come to Phu Ly Pagoda if you have the opportunity to travel to the West and stop in Vinh Long to admire the unique ancient temple with Khmer imprints and feel the peace at the Buddha’s door.