Nguyen Khai Trung, born in 1997, lives in Hanoi, is young but already owns a “terrible” travel fortune with 84 trips to 61 provinces in Vietnam. In addition to the natural beauty, the young man has a hobby of visiting colorful mural villages. To date, Trung has visited 5 villages and many roads and murals across the country. 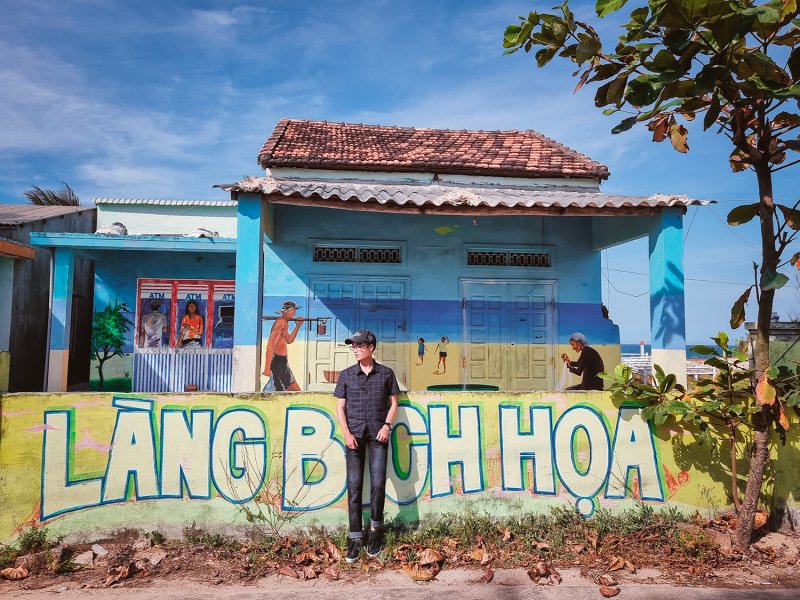 The mural villages are just like any other village in Vietnam. They are idyllic, rustic with level 4 houses along small roads, but in fresco villages, life is embellished with paintings. The dry walls and embankments are brought to life with vivid and colorful drawings.

According to Trung’s share, the frescoes often represent the scenery, culture, and daily life of the people in a realistic and close way. Thereby, they show the process of formation, development, building a life and full of aspirations of that village: “Mural villages in the sea often have images of fishing villages, fishing boats, and sea creatures. … In the highlands, there are pictures of terraced fields, forests, and flowers, ethnic culture… In rural areas, there are often pictures of banyan trees, communal yards, and rice fields. In addition to everyday images, the artists also draw various rich images such as cartoon characters, famous people or historical re-enactments, even abstract paintings. 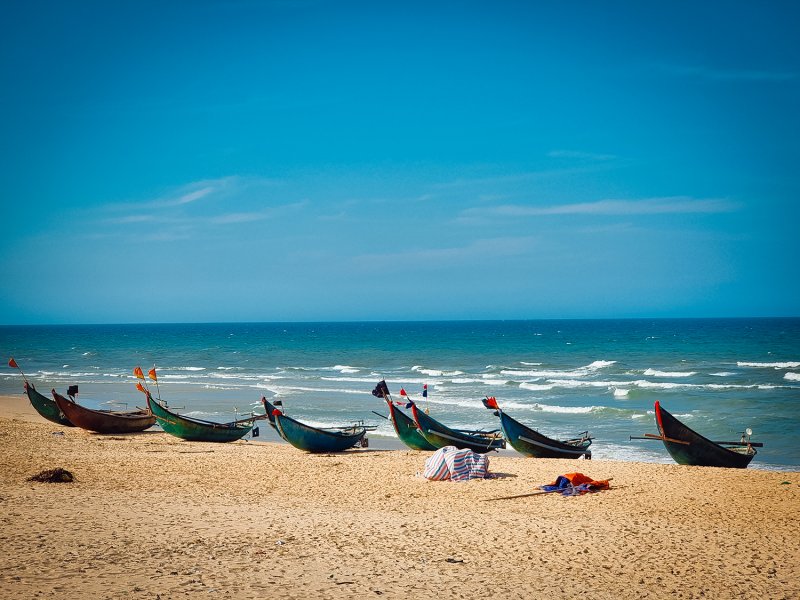 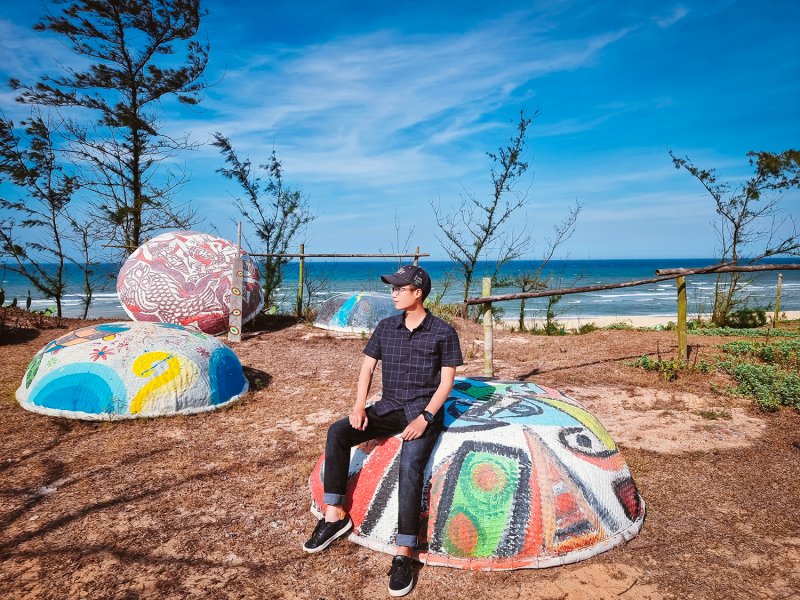 The path of the basket boat at Tam Thanh mural village.

Of the villages he has been to, Trung is most impressed with the mural village of Tam Thanh (Quang Nam). This is the first mural village in Vietnam, with walls painted by artists along the coastal road. Trung said that there are about 100 frescoes, turning the old houses and fences here into an extraordinary life. A local resident shared, the paintings help all their hardships and hardships to make a living at sea disappear when the boat docks back to the village. Visitors coming here can combine sightseeing with fishing villages and swimming in the sea. 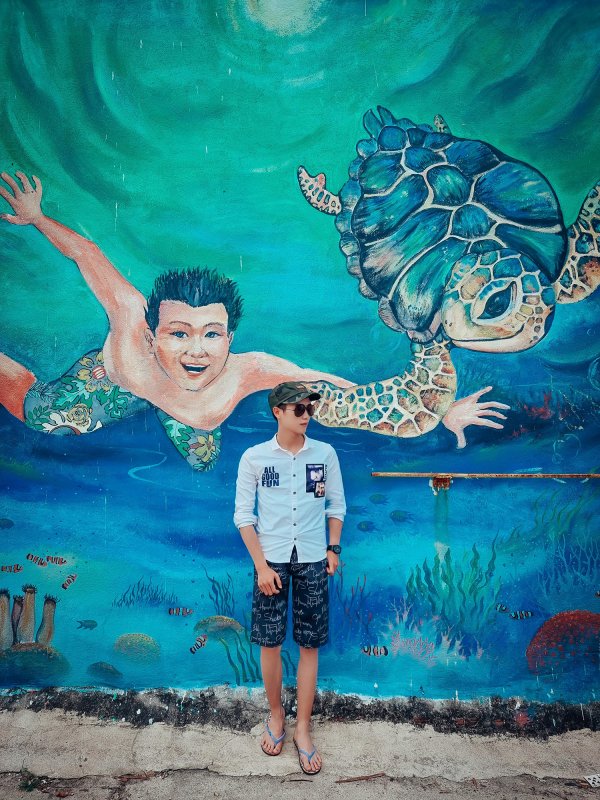 Canh Duong mural village in Quang Binh is not as large as Tam Thanh village, but the drawings are also very beautiful, depicting the image of the people of the fishing village as well as the fighting spirit of the people here. . Here, Trung was most impressed with the painting of an old banyan tree, blending in with the outside scenery. What Trung encountered in all the mural villages along the coast that he had visited were propaganda drawings to protect nature and the marine environment, which, according to him, were very meaningful.

If you are in Hanoi and want to find a new place on the weekend, the mural village of Chu Xa is an interesting choice. Located on the mudflats along the Red River, the murals of Chu Xa village convey familiar images of the Northern countryside with loads of vegetables, bamboo ramps, fields… According to Trung, the murals here help tourists understand more about agricultural culture and appreciate the traditional occupations of the homeland. Visitors can join the tour with Bat Trang pottery village and Xuan Quan flower village nearby.

Trips to mural villages also left Trung with good memories. Visiting the mural fishing village of Vinh Truong (Khanh Hoa), he met women knitting and mending nets. “At first, I just wanted to ask for permission to take pictures with me, but seeing that the girls were very meticulous, I talked and asked. After that, they told me about their work and living life and also taught me how to do it. So I could not only see the murals but also experience life here with my own eyes,” Trung said excitedly. 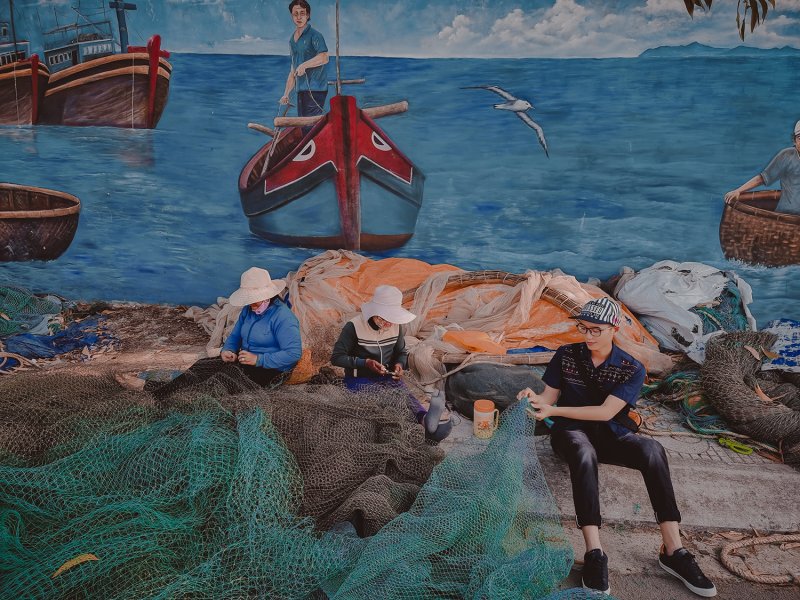 The life of fishermen seems to be one with the mural in Vinh Truong fishing village (Khanh Hoa).

The way to the mural villages is usually easy to find, easy to go, and easy to ask. “There are places that just need to follow Google Maps to go, there are places where you have to ask people to get to the exact destination. The easiest mural village is Canh Duong because it is located near National Highway 1A and the sea, the hardest to find is Chu Xa because quite far from the center of Hanoi (18 km), in the alluvial area along the Red River,” Trung said.

Trung often shares pictures of the mural village on social networks and receives many likes. Friends and travel lovers often comment on the beautiful scenery, ask him for the address so that he can visit later. In addition, he said, pictures of mural villages also receive better interactions than other locations due to their unique, close-knit images and eye-catching colors.

According to Trung, the murals help a little-known village become more prominent and attract tourists, becoming a new local tourist destination. The colorful pictures are photo attractions suitable for all ages and all forms of travel. The frescoed streets are usually small, there is no entrance fee. Visitors can therefore conveniently walk around and take pictures during the day. 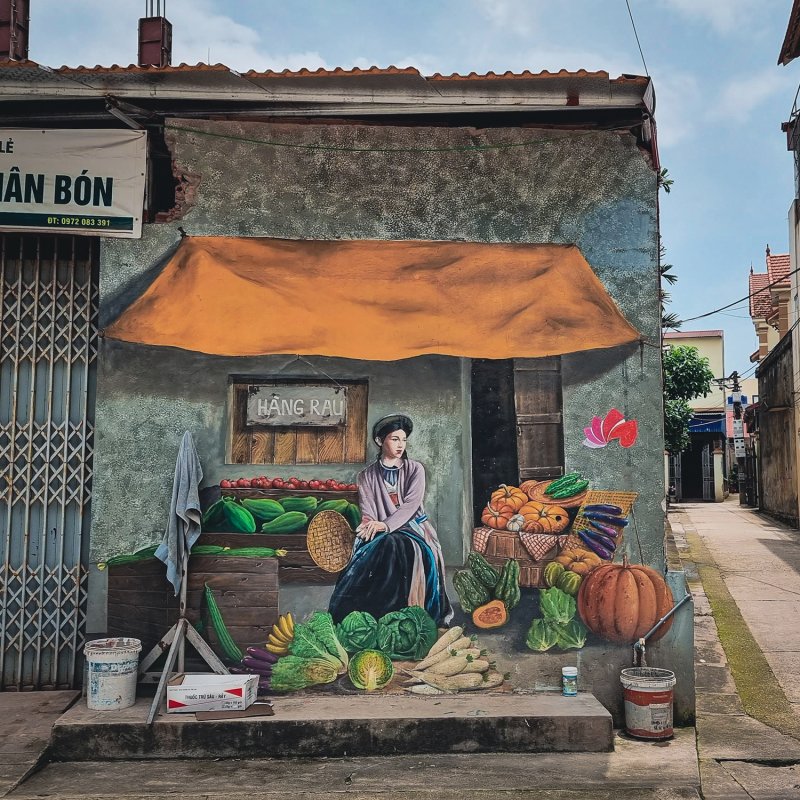 In the future, Trung will continue to explore and visit many more mural villages to have a better overview, spread the love of travel and art to everyone. “There are still many mural villages I want to visit such as in Da Nang, Hue, Ninh Thuan, Quang Ninh… Many mural villages have just appeared, there is little information on the Internet. I even went through it but unfortunately When the epidemic is over, I will go to Thua Thien Hue first because there are 3 villages and mural roads that you can visit,” Trung said. Follow vnexpress