The Southwest region is the familiar name of the Vietnamese people for the Mekong Delta or the Southern Delta. Located in the southernmost region of the country, the Southwest region includes 12 provinces and one city directly under the central government. Bringing the peaceful landscape of the countryside together with the rustic people, creating a unique feature of the Southern region 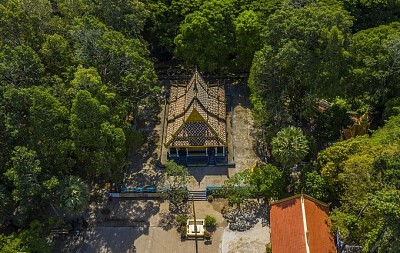 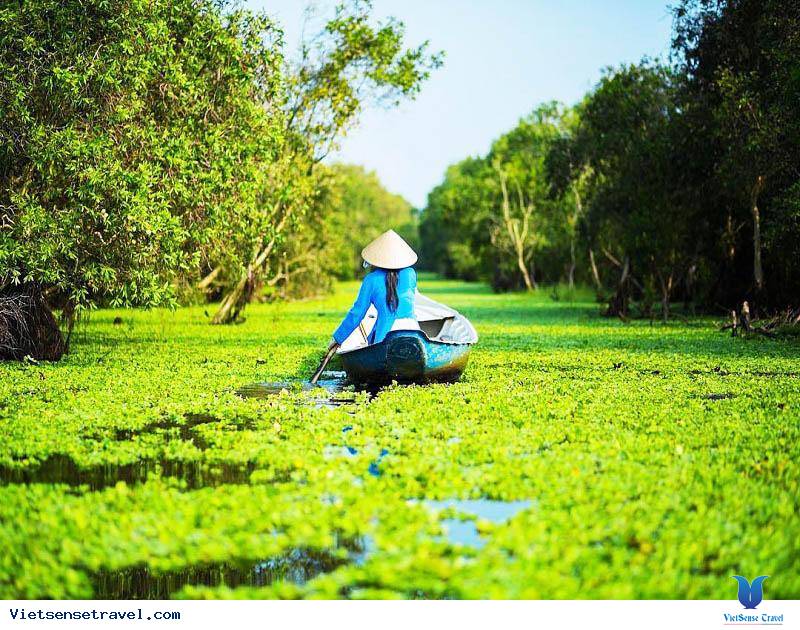 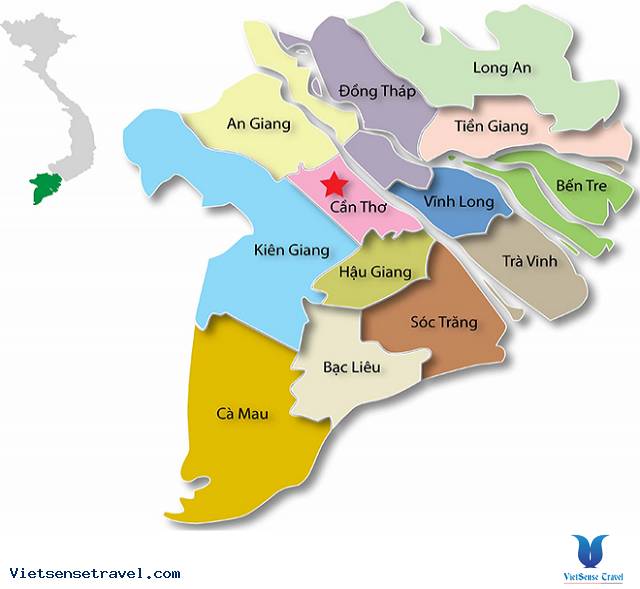 This place Nam Bo is the familiar name of the Vietnamese people for the Mekong Delta or the Southern Delta. Located in the southernmost region of the country, where the South includes 12 provinces and one city directly under the central government. Bringing the peaceful landscape of the countryside together with the rustic people, creating a unique feature of the Southern region. 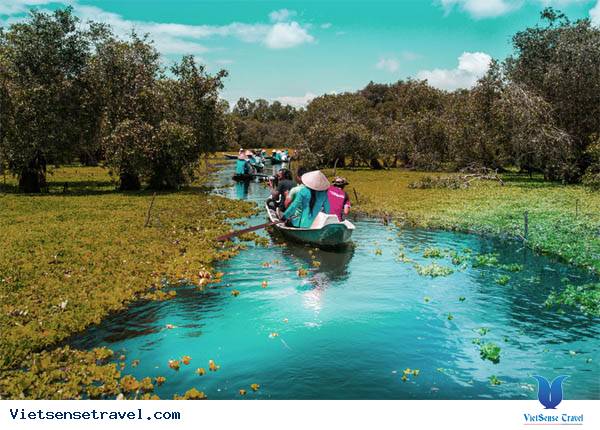 To the Vietnamese, this region is known as the Cuu Long (Nine Dragons), in reference to the nine tributaries of the Mekong River flowing through the delta that has been accreted by millennia of flood-induced silt. These rich soils have turned the delta into Vietnam’s granary, an agricultural miracle that produces more than a third of the country’s annual food output – not only rice but also sugarcane, coconut, and fruit – from only 10% of its total land area. It is also one of the most densely populated areas of Vietnam. There is also a relative shortage of actual tourist attractions but this shouldn’t really be an issue, as you’ll likely visit to learn the unique culture and topography of each area.

To the southwest of Ho Chi Minh City, buses depart from the dense urban area of ​​the city and enter the surrounding area of ​​the highlands of the Mekong Delta. The plain is too modest to reveal its full beauty right away, but the looming rice fields hint at things to come, the vibrant jade green that sometimes dots the ancestral graves. White. There are more than a dozen towns in the delta that have facilities for tourists, although most are rarely visited. 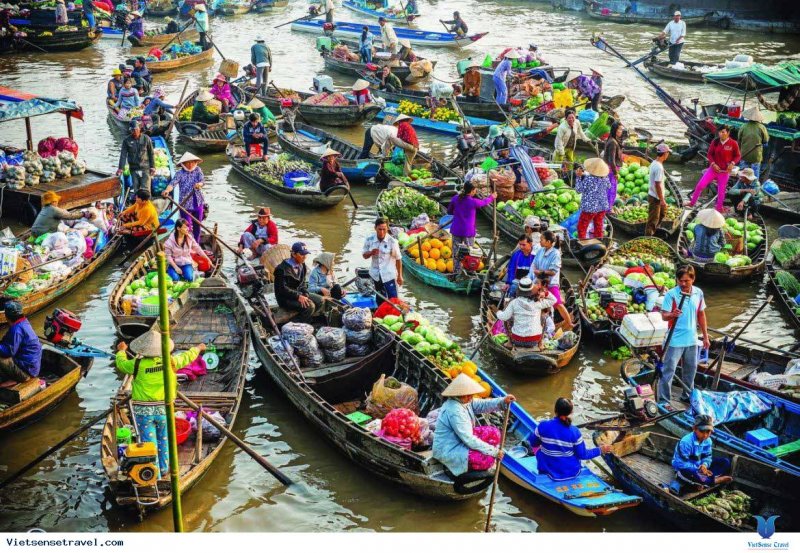 The closest to Ho Chi Minh City is My Tho town. The place is well prepared for boat tours and close enough for Ho Chi Minh City to be seen on a day trip: it offers a fascinating view of the delta’s northernmost right arm, Tien Jiang. From My Tho, peaceful Ben Tre and the lush orchards surrounding it are just a hop and a stretch. Farther south, across a major tributary of the Mekong, is the humble Tra Vinh, surrounded by spectacular Cambodian temples. To the west is Vinh Long, another starting point for boat excursions and a pleasant town to boot from. Head west again, until you reach the lively town of Chau Doc, near the Cambodian border; The nearby undulating Sam Mountain offers a welcome in the surrounding plains, 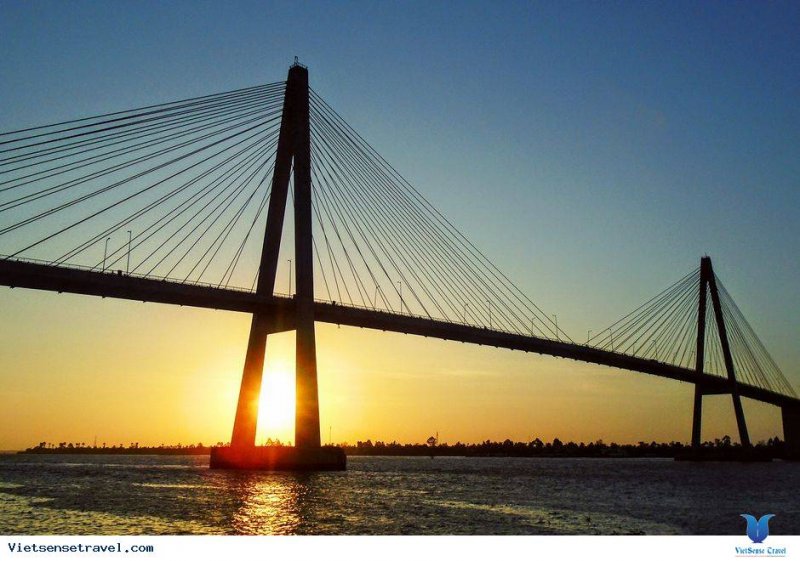 Southeast of Chau Doc is Can Tho, the delta’s largest city and another popular spot for boat trips and visiting floating markets. From here it is possible to make a trip around the southern half of the delta; The first is the Khmer stronghold of Soc Trang, an especially rewarding excursion if your itinerary coincides with the colorful Oc Om Bok festival (November or December), during which the ethnic Local Khmer go to the river to organize spectacular longboat races. Further afield, at the foot of the delta, you can explore the swamps surrounding Ca Mau by boat.

Sailing north is the charming, idyllic town of Rach Gia, while squeezing northwest to the border will bring you to Ha Tien, a remote border town surrounded by Khmer villages. best place to get on a boat to Phu Quoc. This town also became famous for being able to cross the border to Sihanoukville in Cambodia or vice versa. Last, but not least, is Phu Quoc Island itself – despite growing at a breakneck pace and growing in popularity year by year, it still holds its ground as one of the best beach destinations in the world. The best sea on the mainland.

Going through many stages, gradually forming coastal sand dunes. The topography of the area is relatively flat, the average altitude is from 3 to 5m above sea level. Besides, it can be clearly seen that the humid tropical climate is sub-equatorial in this land. The average annual temperature is 24 – 27°C and the average annual temperature range is 2 – 30°C. This area has two distinct seasons, namely the rainy season lasting from May to October; dry season from December to April.

This region has a warm and sunny climate all year round, the weather is mild, so almost every season is beautiful, especially in winter for those who want to escape the cold. Beautiful places to visit in winter.

Where does the western winter go? What’s so beautiful about the West in November, December, and January?

By the end of November, it is the end of the floating season, from December to January, February is the time near Tet. Coming to this land on this occasion, you can visit the famous flower villages of Sa Dec, Tan Quy Dong, Vi Thanh, … 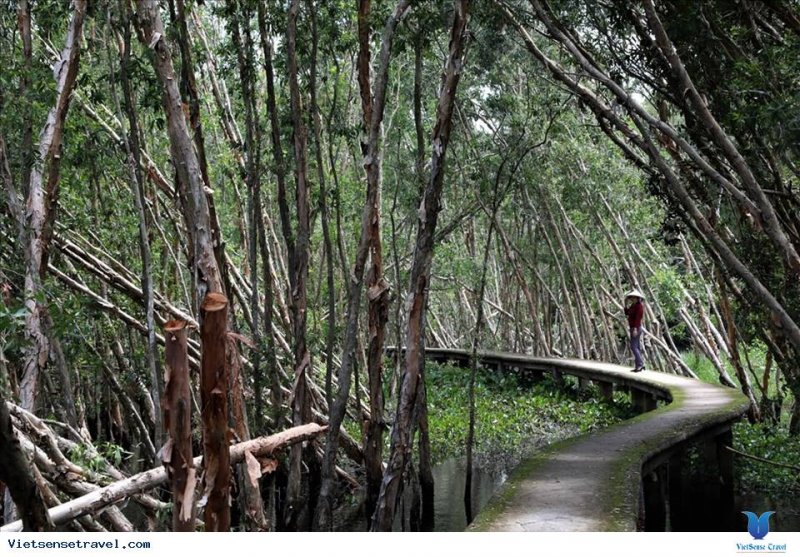 Tan Lap floating village, also known as Tan Lap Melaleuca forest, belongs to Moc Hoa district, Long An province, about 100 km from the center of Ho Chi Minh City, the road is quite easy. Coming here, you will feel like you are lost in a fairyland with the sunlight shining through the trees, the rustling of leaves, the singing of birds… You should come to Tan Lap in October and November to see the lotus flowers. bloom, breathe in the sweet fragrance of this pure flower.

Tra Su Melaleuca forest, located about 30 km from Chau Doc city, is considered the most typical and unique natural habitat conservation area of ​​the wetland ecosystem in the Mekong Delta. Melaleuca forest is most beautiful in the floating season (from September to November every year). Beo bran covered with a green carpet on the “road surface”, the two sides of the melaleuca covered their arms. Occasionally, the sound of oars, birds, fish… disturb the quiet space of a green forest. 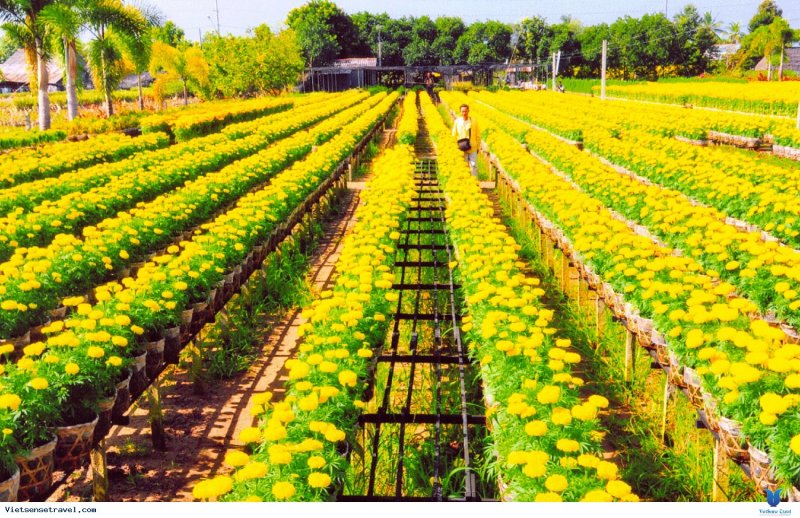 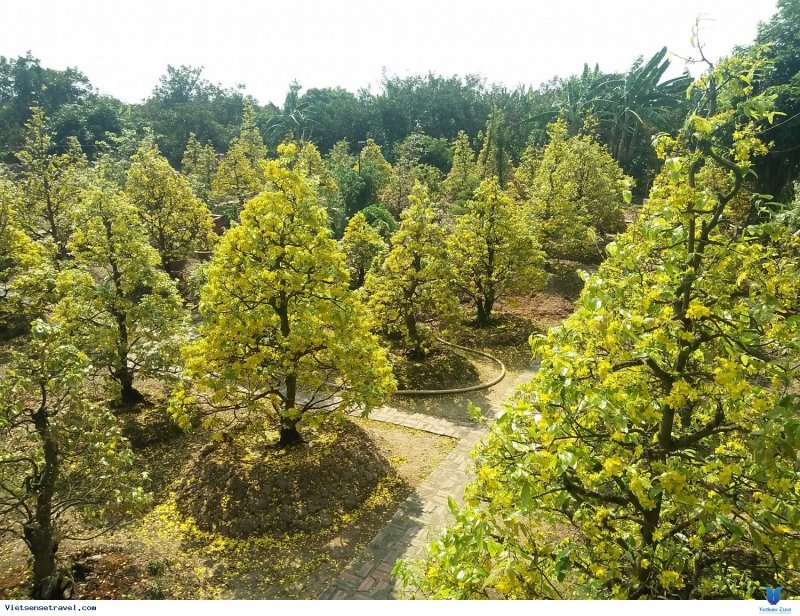 Phuoc Dinh apricot village, about 3 km from Vinh Long city center, is a famous supplier of apricot flowers in Vietnam. Apricot flowers here are very pristine, well cared for, so they have a long life and high value. On the approaching Tet holiday, this is the place where many people gather to buy apricots to prepare for Tet. Therefore, if you visit Phuoc Dinh on this occasion, you can be overwhelmed by the bustling atmosphere of apricot orchards. 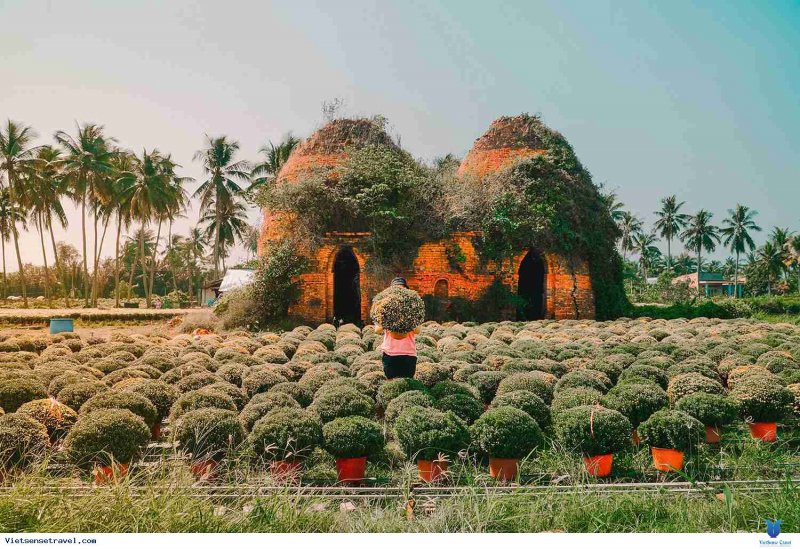 On the days before Tet, in the space of Cho Lach flower village, which is considered the “Kingdom of ornamental flowers” is always bustling day or night. Gardeners are working hard, taking care of flowers in time to serve Tet. The ferrymen are also busy transporting flowers in and out continuously. 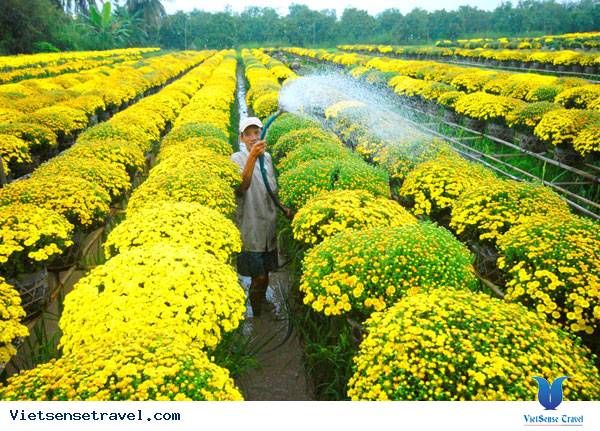 With a convenient location, closest to Saigon, My Tho attracts a lot of tourists coming here to take pictures and experience farm life in Vietnam. When the bustling atmosphere of the Lunar New Year is covering everywhere, you will be completely stunned with the colorful costumes of My Tho Flower Village, Mekong Delta if you move along Highway 50 and come on. Like the above flower villages, My Tho is also a place to grow and supply different flowers for the neighboring areas. At this time, visitors will find a bustling atmosphere where local farmers tend, harvest and transport flowers to sell throughout the country.

Thoi Nhut Flower Village, Can Tho Although not as famous as Tan Quy Dong or Cai Mon villages, Thoi Nhut is also an interesting destination to see flowers on New Year’s Eve. The flower village is more than 100 years old and has grown some popular and typical flowers of the West such as apricot flowers, chrysanthemums, dahlias, sunflowers…

Cai Rang Floating Market, Can Tho 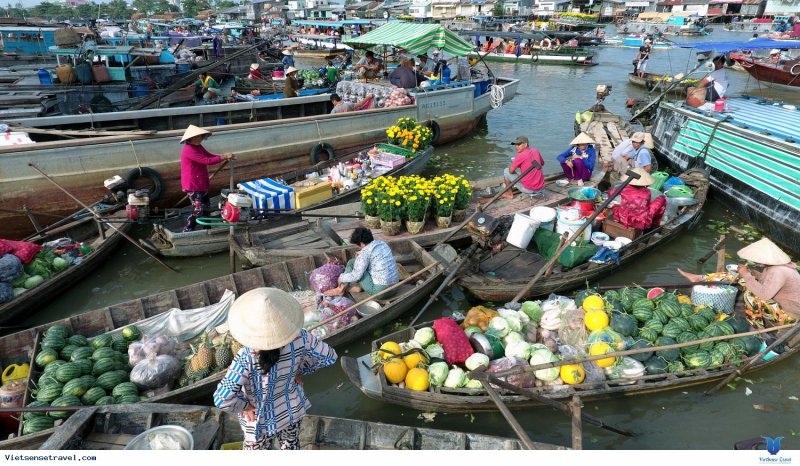 In the early morning, the water path has become a maze of various boats loaded with papayas, mangoes, bananas, pineapples, and even tobacco. To meet the needs of both domestic and foreign tourists, floating markets also have different services. In addition to fresh fruit, they can enjoy Vietnamese breakfast dishes such as Pho, Hu Tieu or coffee.

The largest floating market in the Mekong Delta, Cai Rang usually starts at 4 am and lasts until midday. However, you’d better get there before 9am. Main goods here include fruits, agricultural products, wholesale specialties from Chau Thanh district and surrounding areas. As mentioned above, each boat has a long vertical pole that hangs samples on top. 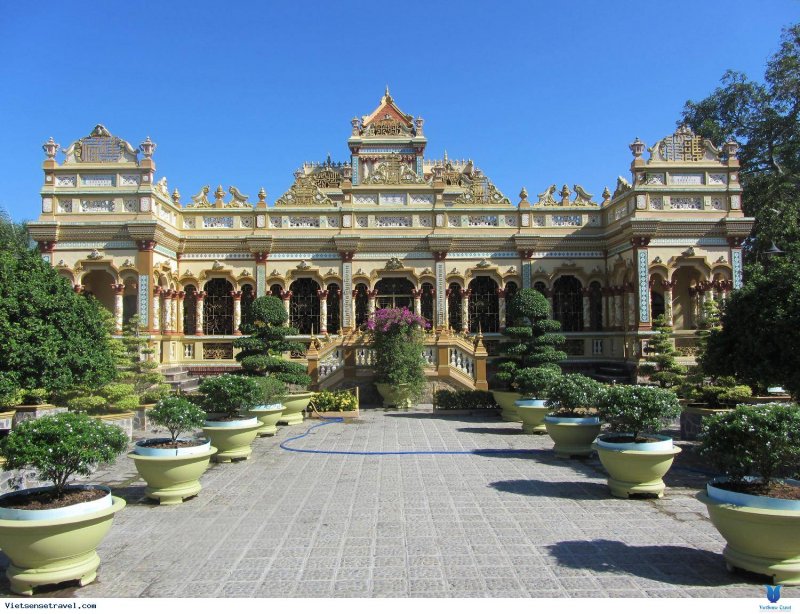 Known as the largest temple in Tien Giang, Vinh Trang Pagoda was built in 1849. The unique structure of the pagoda is a blend of Vietnamese, Chinese, and Cambodian architectural styles. The temple has been restored many times since it was built and the structure resembles the Raj Palace of India. It is set among lovely gardens filled with flowers and shrubs, lotus ponds, and monks’ tombs and has three large ornate archways. You can easily get to the temple by bike or even walk to while staying in My Tho, Vietnam.

Ong Temple, Can Tho Province 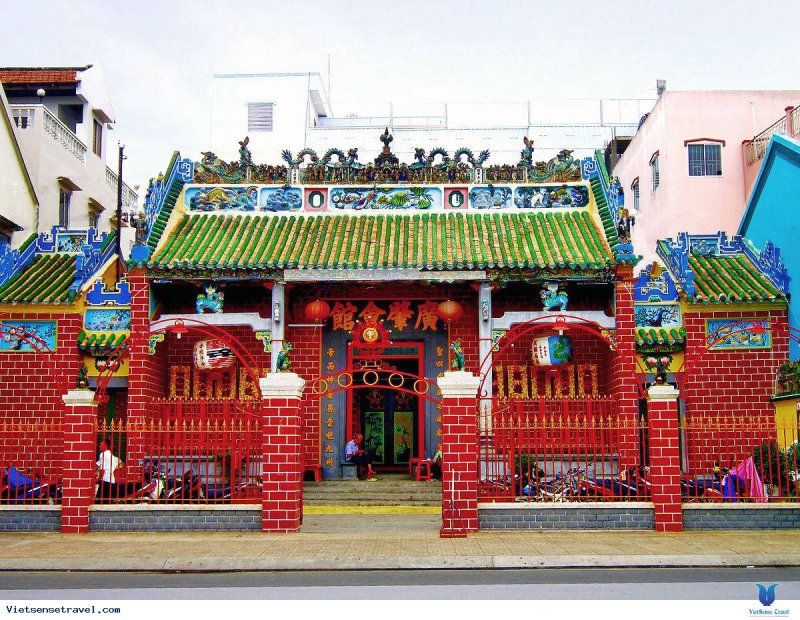 Ong Temple is also known as Quang Trieu Hoi Quan, a temple built formerly as a Chinese assembly hall from Guangdong, China in 1894. The temple is where locals worship gods such as God of Earth or God of Fortune. Therefore, when coming to Ong Temple, visitors will experience Chinese-style architecture as well as witness the scene of local people worshiping. This temple is one of the rarest temples in Can Tho that still retains its original architecture. 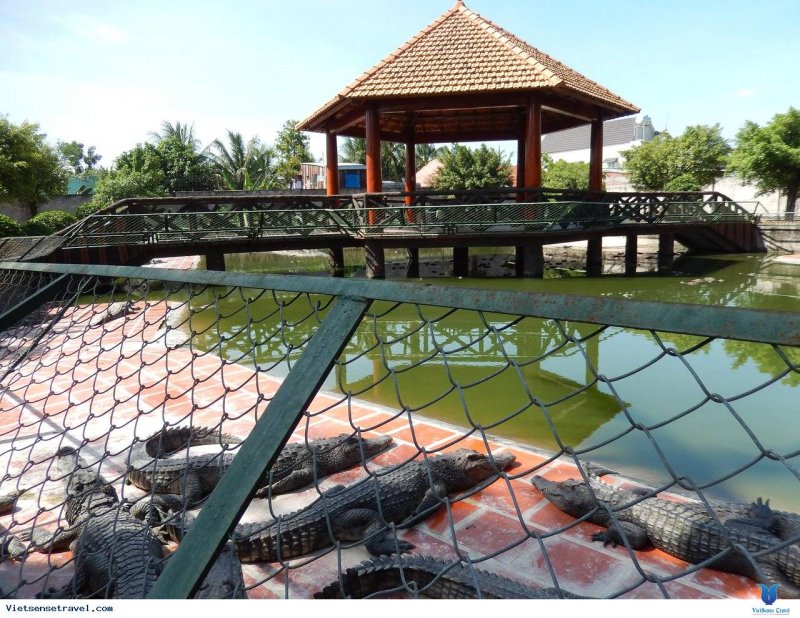 This farm is one of the five largest crocodile farms in Vietnam. With a combination of ornamental plants and more than 10,000 crocodiles, the Ba Dang crocodile farm is a very interesting destination for visitors. This is the most suitable destination for visitors who love plants or want to learn more about the ferocious four-legged lizards and their farming techniques. At the end of the trip, visitors can buy souvenirs made from crocodile skin such as shoes, wallets, or belts.