Despite their strange and ugly appearance, these specialties attract visitors by their extremely delicious taste. Although they are expensive, up to millions of dollars, they are still sought after by diners.

Devil face fish (also known as fighting fish, frogfish) is a fish with an ugly appearance and ingenious camouflage ability. Even the devil face fish is very poisonous, known as the “venomous god” on the ocean floor.

Despite having a strange appearance, “the worst in the world”, but devil face fish is a famous specialty in some sea areas such as Nha Trang, Phu Yen, Binh Thuan… Their meat has a strange and delicious taste. , rich in nutrients, so it is used as a raw material for many dishes such as steaming, baking with salt and pepper, sour hot pot, braised curry…

Devil face fish is both ugly and poisonous, but it is a “rare and hard to find” specialty.

To process this fish requires a chef to be very careful and experienced. First, people have to filter out the rough outer skin and then use a knife to separate the fish meat. This meat is sliced ​​into thin slices, marinated with spices, and then processed into delicious dishes.

However, due to the number of fishing demons faceless so even coastal people and customers when traveling not everyone can enjoy the specialties. 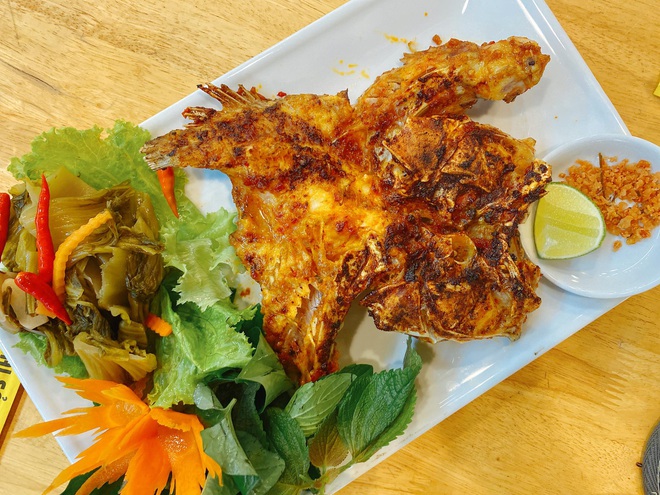 Devil’s face fish meat is chewy and firm, with a rich flavor, described as both chicken and lobster (Photo: Aquarium seafood bowl).

Sea cucumbers belong to the group of marine animals with long bodies and hairy skin, with inner bones located right under the skin, known by other names such as mutton, sea leeches, sea cucumbers… They are seafood. found a lot on Ly Son island (Vietnam), Jeju Island (Korea), even appearing in the waters of Japan, the US, China, and Malaysia.

The reason why sea cucumbers are so named is because of their rough, black appearance that looks like a large leech. Around the sea cucumbers, there are octopus-like probosci’s eyes that make many people “shiver” even by looking at them, not daring to hold or touch them. 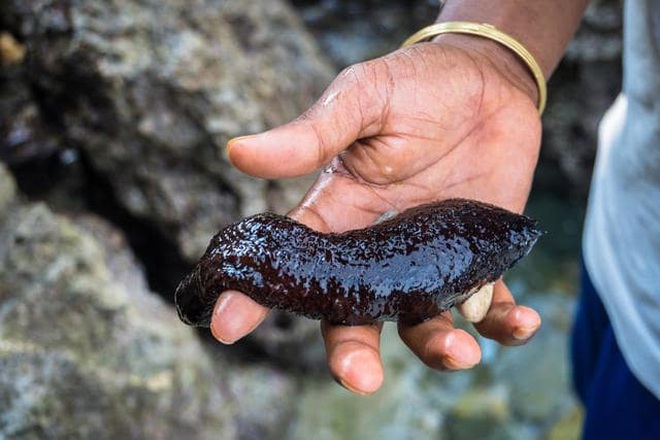 Being likened to the “ginseng of the sea”, sea cucumbers have become a specialty that “attracts” customers to buy despite their high price and unattractive appearance (Photo: Dmitrii Melnikov).

Despite its unattractive appearance, sea cucumber is one of the luxury specialties that are very popular with the rich because it provides high nutritional content, high protein, low fat, low cholesterol, … and has a strong flavor. Strange taste can not be confused with any dish.

In Ly Son island (Quang Ngai), people want to catch sea leeches, they have to hunt at night and need a lot of experience. This animal moves quite slowly, so catching them is not difficult. However, only sharp-eyed divers can detect sea cucumbers from air bubbles in rock holes to catch them.

Sea cucumbers can be caught all year round, but the most delicious and nutritious sea cucumbers are in the summer. Even at the time of “hit” the season, fishermen can harvest “terrible” sea cucumbers, weighing up to several pounds. 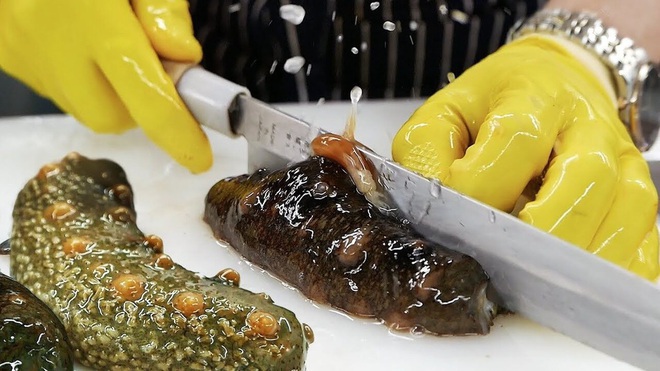 Sea cucumbers are removed from the intestines, cleaned, and processed, using only the crispy outside (Photo: Justdial).

Not only requires skillful fishing techniques, but the preliminary processing of sea cucumbers also requires feats. Local people often remove the intestines of sea cucumbers, wash them and then drain them. Then boil with papaya leaves, soak in water 2-3 times and then rub thoroughly with salt to reduce the black color. Put the freshly prepared sea cucumbers in the refrigerator or soak them in cold water to increase their crispiness before processing.

In Ly Son, sea cucumbers are often processed into many delicious dishes such as stir-fried sea cucumbers with mushrooms and some other vegetables, hotpot, sea cucumber soup, etc. Although they have a strange shape, they are less eye-catching, but they have a unique flavor. strangely delicious taste, easy to attract diners right from the first enjoyment. Sea cucumber meat is tough, crispy, has a strange taste, and is rich in nutrition (Photo: Hungryworks).

Not only is the raw material for making many unique dishes, but sea cucumbers also bring high nutritional value and are used as natural remedies with the effect of nourishing blood, laxatives of apples, tonic kidney, and essence.

Because of its high nutritional value and uniquely delicious taste, sea cucumber is a food that is sold at an expensive price, averaging about 700,000 – 1,000,000/kg, depending on the type. One of the most expensive types is a Japanese sea cucumber, priced at 3,500 USD/kg (about 68 million VND), the more bizarre the shape, the higher the price.

Sam is considered an expensive and precious specialty, living mainly on the sandy beaches in high-tide areas. In Vietnam, this creature appears a lot in the waters of Cat Ba, Ha Long, Can Gio, or Quang Yen…

At first glance, sam looks like an iron hat, the shell is very thick and hard. They have 4 eyes and 8 pairs of legs, of which two eyes protrude on the side of the body and the other two eyes on the head are close together. At the tail, there is a dorsal edge, triangular in shape. Sea sam has a strange and ugly appearance, but it is a specialty that “sucks” gourmets (Photo: Tung Anh).

Sea sams live in pairs, the male clings to the female’s back, going anywhere in parallel. Therefore, fishermen often catch both sambars at the same time. If there is only one odd fish in the net, the fisherman will quickly release it back into the sea.

Sam is available all year round, but the most are from June to September. A female sam is usually 1.5 – 3kg, sometimes heavier. The male sam is less than half, only 1-2kg. 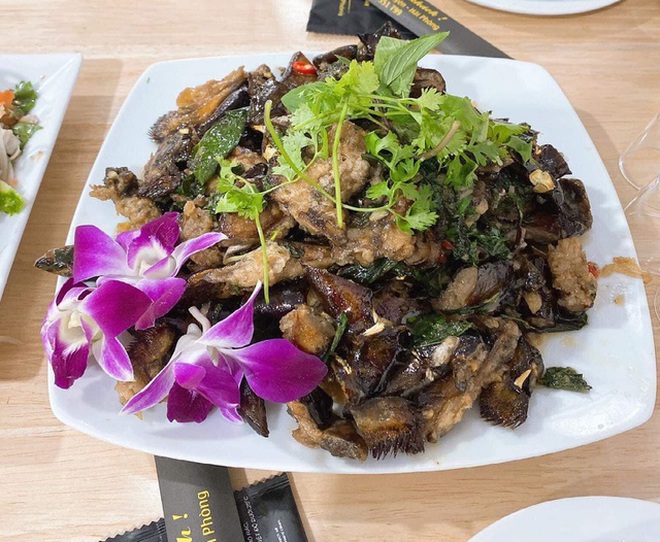 The fishing is quite difficult. Sam only lived for about 3 days when he left the sea, so not all diners have the opportunity to enjoy this specialty (Photo: Tung Anh).

It is not only difficult from catching but also to processing sam, if not careful, the dish is “regarded as abandoned”. Sam must be processed very carefully. When cutting sam blood, it must be cut into new rays without losing the acrid taste of the meat. Particularly, the liver and intestines are carefully filtered. If you accidentally break the liver, intestines, stick to the meat, it can cause allergies or abdominal pain…

Sam is a crustacean with welding properties, so when processing, it requires the cook to mix hot spices to balance the dish such as garlic, lemongrass, chili, guise leaves,… Each sam After removing the hard shell, the flesh will be about 2/3 of the original weight. From the meat of sea sam, the chef will process many different dishes such as sam salad, fried sam with chili and pepper, sam salad, sam vermicelli, deep-fried sam…

But the most popular and “popular” with diners is the sweet and sour stir-fried sam meat and sam’s feet. The female sam in the breeding season often carries a large egg belly, rich in protein, so it is often processed into a grilled sam egg dish, making anyone who eats it once remember the unforgettable taste. 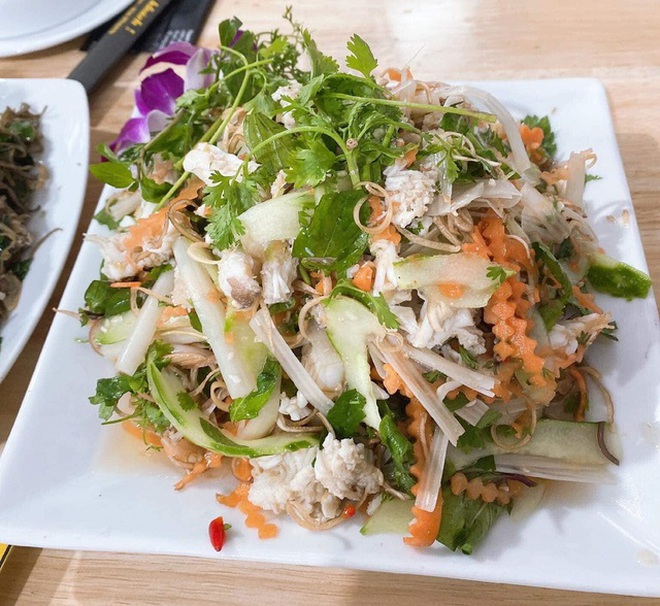 With sweet and sour fried sam’s feet, after preparing the clean sam shank, the cook will cut them into bite-sized chunks. The combination of a special viscous sauce, with a sour, spicy, salty and sweet taste, and the aroma from the guise leaves make the sweet and sour fried sam’s feet an easy-to-eat delicacy with a distinctive and bold flavor. sea. The leg shell is soft, so diners can easily filter the meat when enjoying it, eating like crab claws is very interesting.

Because it is difficult to catch, does not live long, and is a feat of processing, so sam only appears on the menu in some restaurants. Many diners who want to enjoy sam have to accept to move hundreds of kilometers to the waters of Hai Phong and Quang Ninh to “target market” with exotic dishes from sam.

However, according to many experienced people, diners should not eat too many eggs and sea sambar meat at the same time because the toxins in seaweed and seaweed – the food of sam may not be fully decomposed, which will be harmful to health. user health.

Sea urchin is a species of seafood that lives in herds, appearing in many different seas, most notably Ca Na, Phu Quoc, Ly Son, Nam Du and Tuy Hoa waters. They often congregate in places with many coral reefs, reefs, and burrows to feed on mosses and seagrasses, especially chives.

One of the most famous sea tourism areas with the dish from the sea urchin is Nam Du Island. The best time to enjoy the pineapple is around the 3rd – 6th lunar month.

Despite its ugly and strange appearance, sea urchin is a specialty with high nutritional value that many people love.

To make the delicious urchin dish, people will add onion fat and a little peanut into the urchin and bake until the fat is sizzling and the meat has turned yellow. Depending on the taste of each person, you can add lemon salt or not.

Grilled umami with onion fat has the fleshy taste of umami meat, the greasy taste of onion fat, and the aromatic flavor of peanuts. All make up the delicious taste of Nam Du’s specialty grilled sea urchin dish.

Sea urchin is likened to a “gentleman’s panacea” because it has the effect of tonic kidney, yang, and vitality.

For some tourists who like fresh food, they can eat raw urchin that has been cleaned, cut off the spines, squeezed lemon, and eaten with mustard.

Coming to Nam Du, porridge is also a delicious dish that visitors cannot ignore. To make delicious porridge, one must use freshly caught urchin. After cleaning, the cook scraped the meat.

The chef will marinate the meat with spices such as pepper, onions to increase the richness. After that, the ingredients will be fried to enhance the flavor and blend together and then pour into the boiling porridge pot, stir well and quickly scoop into the bowl. Grilled sea urchin with onion fat is loved by many diners (Photo: ntvvirus).

Mushroom meat is a nutritious food that provides many essential nutrients for the body. According to medical research, sea urchin has the effect of tonic kidney, yang, enhancing vitality, in addition to being a calcium-fortifying food for the body, so it is also honored as “sea ginseng”.