Not only has the sea and sky as blue as jade, but Ha Long is also famous for its majestic limestone mountains and deep caves containing many masterpieces of nature. That is why the visit to the Dau Go cave is always interested by many tourists.

Where is Dau Go Cave?

Dau Go Cave is a karst cave located at an altitude of 27m above sea level, in the heart of a limestone mountain range on Dau Go Island, in Ha Long Bay, Ha Long City, Quang Ninh Province, and far from the cave. Thien Cung is about 300m.

It is known that the age of the cave is equal to the tectonic age of Thien Cung cave, that is, it was formed in the Pleistocene period about 2 million years ago. However, the impressive thing is that the scenery inside the cave is not worn or metamorphosed but is sharpened to create many unique shapes, so it is considered one of the most beautiful caves in Vietnam. 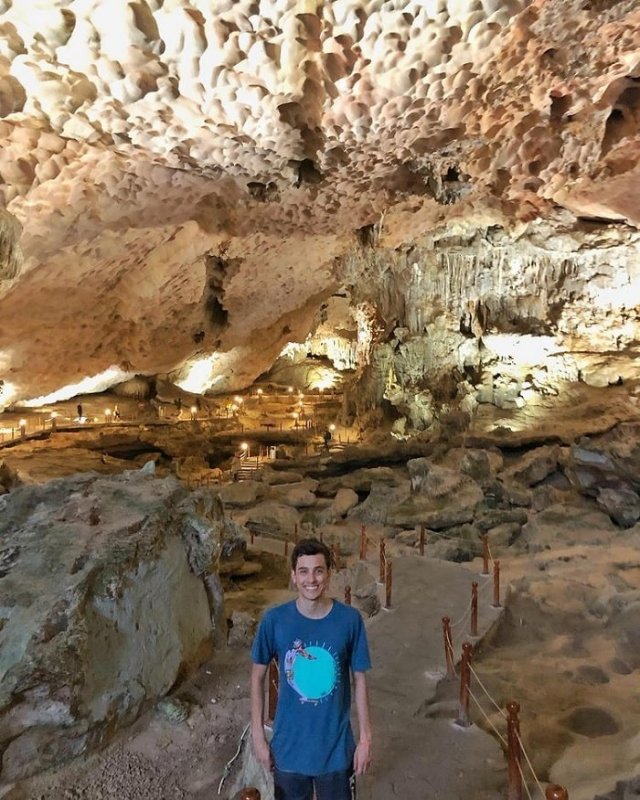 In particular, the Dau Go cave was once praised by King Khai Dinh as “five colors wall clouds” during his visit in 1918, visited by Uncle Ho and sobbed during his visit in 1957. and was honored as a cave of wonders by the French tourism magazine Merveille de Monde (Wonder of the World). Therefore, this is the Ha Long tourist destination that you must definitely visit on your trip.

The origin of the cave’s unique name Dau Go

Just by explaining the name of the cave, many stories and legends were born. Accordingly, the first theory is related to history. According to the old people’s stories, in the past, this river area was the place where Tran Dynasty soldiers hid wooden stakes in the riverbed to destroy the Mongol invaders, so it was called Giu Go cave. When it was passed on by word of mouth to many people, it changed to Dau Go and became such a familiar name that it was included in folk folklore:

The second theory is that the terrain of this island is bow-shaped, creating an area with little wind, often used by people to avoid storms or rest after days of fishing at sea, then they repair it. Building boats here left many pieces of wood left, so the name Dau Go was born.

The third explanation is based on the shape of the cave when viewed from a distance like a giant tree with the roof of the cave-like the head of a tree. Each theory has its own reasonable things, but no matter where it comes from, this unique name has helped Dau Go cave get more attention and be visited by more people. 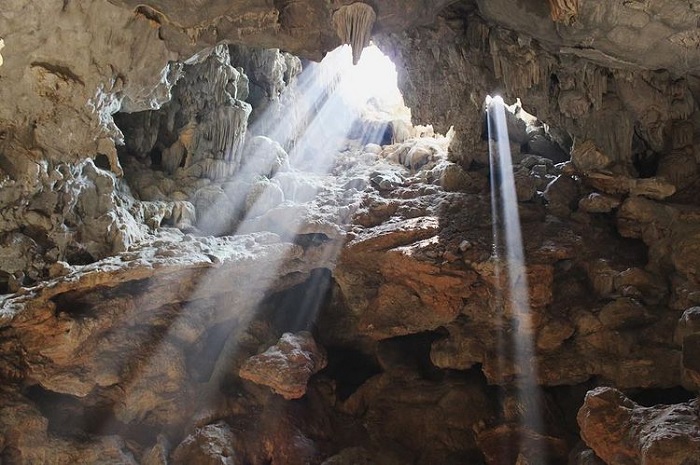 The light shines on as magical as a fairy scene (Photo @hagen.r)

Dau Go Grottoes impress visitors with its huge size of up to 5000 m2, especially the entrance of the cave is up to 17m wide, 12m high and has the image of a huge starfish, both creating a highlight and helping the space. Air and light easily shine inside the cave, creating conditions for flora such as ferns, woody plants, moss… and rare species of swallows to grow in abundance, this is something that no cave has. Any action on Ha Long Bay can do. 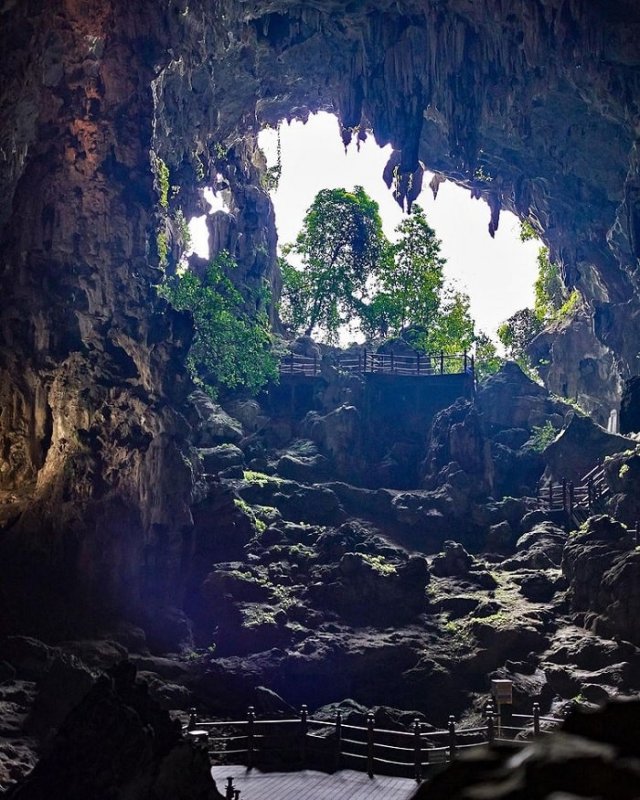 The entrance of the cave is super wide (Photo @satoshi0040)

Inside the cave is divided into 3 different spaces, taking visitors from one surprise to another.

The first space receives the most natural light, so everything is clear and sharp, it is the dome with natural oil paintings reproducing the wild natural landscape, stalactites and stalactites. depicting familiar images in daily life such as: sleeping lions, pythons curling around the tree trunks, elephants feeding, fighting cocks or deer. bewildered in the forest…of course, if you have a richer imagination, you will admire more and more unique images. 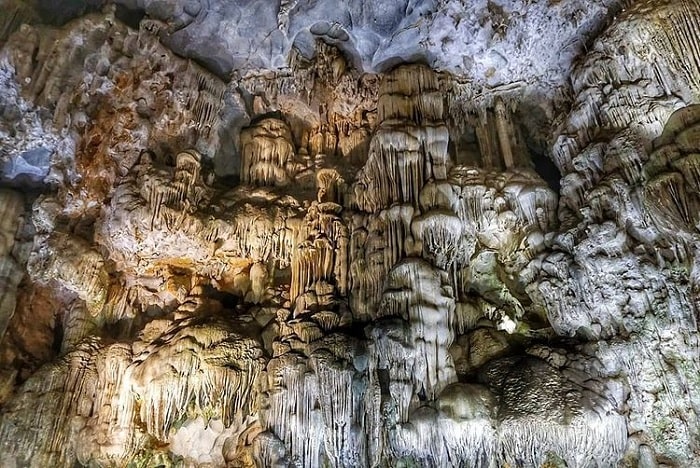 The second “room” of Dau Go cave welcomes visitors with a monumental painting of rocky islands undulating on the vast river, like a miniature picture of Ha Long Bay, but especially in that, it was created from the miraculous hand of nature, of creation.

Because the amount of light absorbed is not much, people have used colored light bulbs for lighting, both for ease of travel, and combined with stalactites with many strange shapes suspended from the ceiling. creating a fanciful, shimmering space, stimulating people’s curiosity. 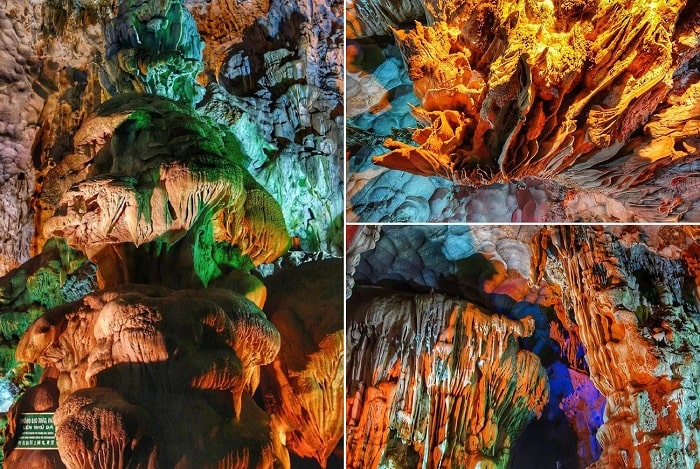 At the last corner, the heart of Dau Go cave suddenly expanded to contain an ancient citadel with giant stone columns, sometimes winding soft and pretty, sometimes sharp and stiff like a battle. A melee battle with people, horses, swords, and spears jostling to fight, was stopped by some mysterious force and petrified over time.

Another interesting point is that when you reach the end of the cave, you will admire a clear fairy well, and even though it is located on the sea, it is still full of freshwater all year round, making everyone wonder and wonder. surprised. 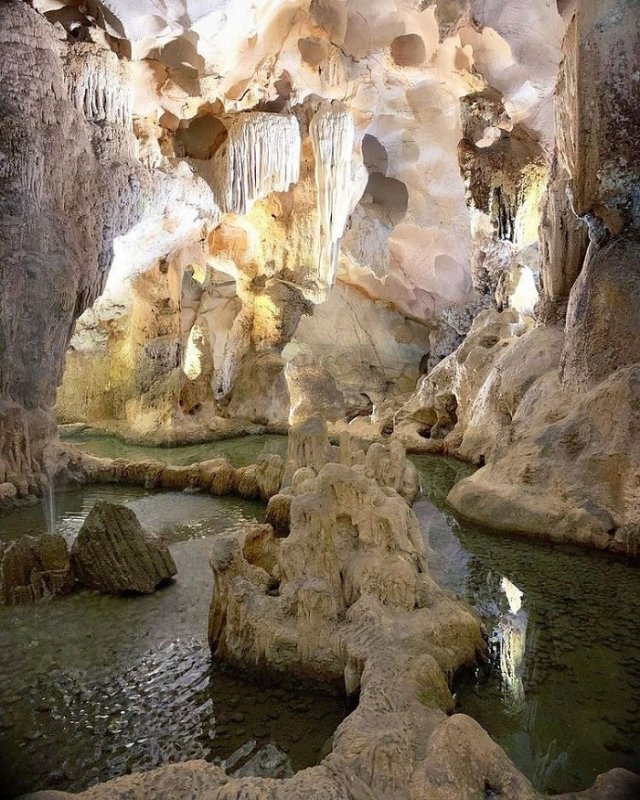 The strange fairy well in the cave (Photo @explore__vietnam)

Some notes when visiting Dau Go cave in Quang Ninh

How to get there : From the center of Ha Long city, visitors take a taxi or motorbike taxi to the tourist pier then buy a boat ticket to visit for the day or buy a Ha Long Bay cruise to both admire the scenery and experience the attractions. Luxury service here. The train journey will pass through Thien Cung cave, Trong Da island and Ba Hang fishing village… so you can also get off to visit for a more complete trip. Then, from the exit of Thien Cung cave, you go along the mountain road on the right to reach Dau Go cave . There are many boats coming to the cave (Photo @hoangthi_aries)

Time to visit: According to the Ha Long travel experience of those who went before, the ideal time to visit the Dau Go cave is from April to October, in which summer from June to August is the time when Tourists come here the most because the cool air in the cave is very suitable to avoid the heat without having to go to the sea.

– Wear comfortable, loose-fitting clothes that absorb sweat well and wear long clothes to avoid being “attacked” by insects in the cave.

– Bring allergy medicine and insect repellent to protect the body.

– Should bring drinking water and some snacks to fill the stomach if the tour is a bit “excessive” time, of course, after eating, carefully clean up the garbage and bring it back to the right place so as not to take pictures. affect the natural beauty of the cave. 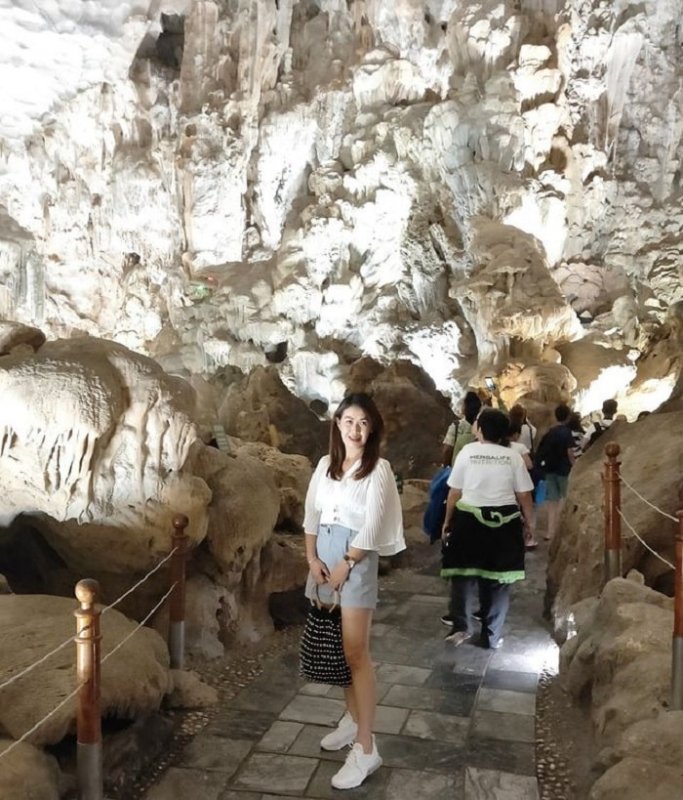 If you are tired of artificial things, want to immerse yourself in the most natural and true things, then Dau Go Cave in Ha Long is the ideal destination for you.