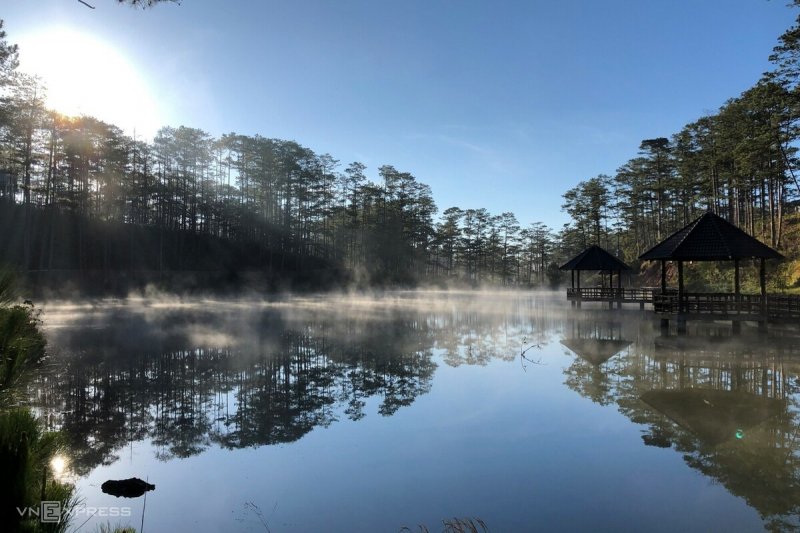 Langbiang Plateau (or Lam Vien Plateau), where the two highest peaks are Nui Ba 2,167 m and Bidoup 2,287 m, combined into the name of Bidoup – Nui Ba National Park. The garden was established in 2004, located in Lac Duong district and part of Dam Rong district, Lam Dong province, the head office is located in Da Nhim commune, about 50 km from Da Lat city along Highway 27C.

With hundreds of animal species and thousands of plant species, this is an ideal place for ecotourism to explore wildlife. Coming here, visitors can enjoy the fresh, cool air, watch the morning dew covering the lake and pine forest in the center of Bidoup. 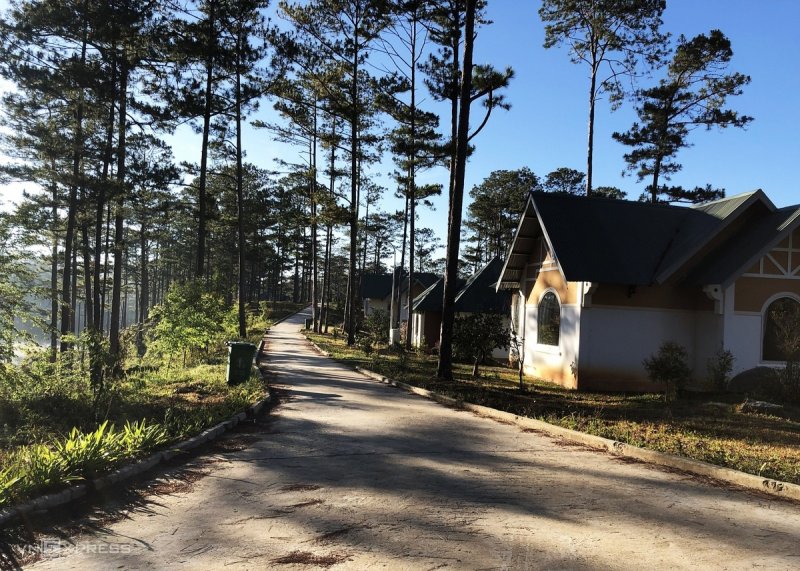 The guest house in the operating center of Bidoup – Nui Ba National Park is located in pine forests far from residential areas, including 60 comfortable and airy rooms. With a capacity of more than 100 people, this place is suitable for seminars, scientific researchers and delegations to visit and relax. The guesthouse has an architecture in harmony with the natural landscape, with food services, a nature museum with souvenir shops, and a flower garden. Currently, due to the complicated development of Covid-19, the National Park and the guest house are temporarily closed to welcome guests. 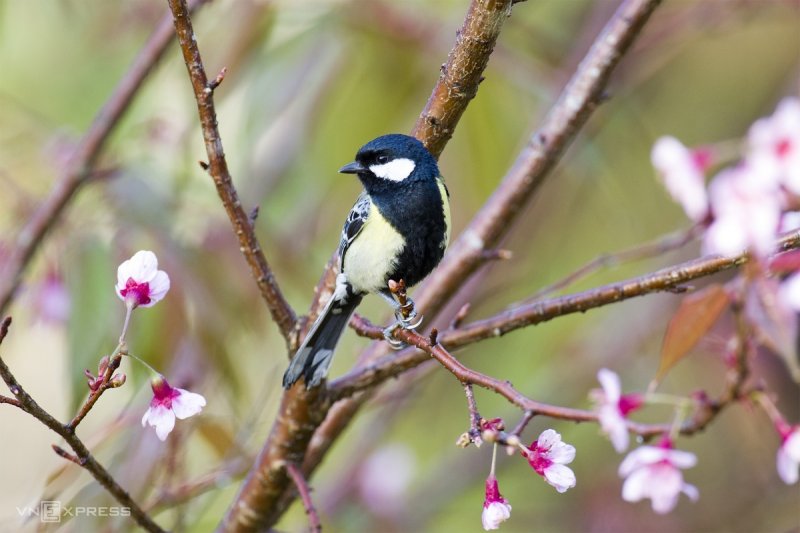 Bidoup – Nui Ba is located in the endemic bird area of ​​Langbiang plateau, with 301 species recorded. In the early morning, visitors can walk around the pine hills and see common birds such as yellow-bellied tit. The bird has a beautiful color, small size, black head, light yellow lower body, moss green, and gray back from neck to tail. 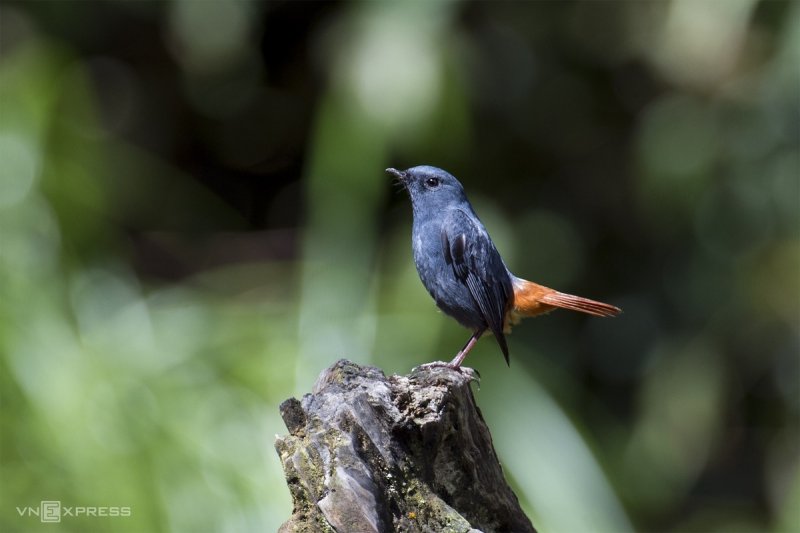 On the National Highway 27C route through the National Park, visitors can encounter many winding streams under the vast old forest covered with clouds. There are beautiful birds living along the stream, easy to see are red tails and gray heads.

The gray-headed red-tailed robin (pictured) has light blue plumage with a prominent chestnut tail, the female is light gray with white spots, and the female has a very funny fan dance. 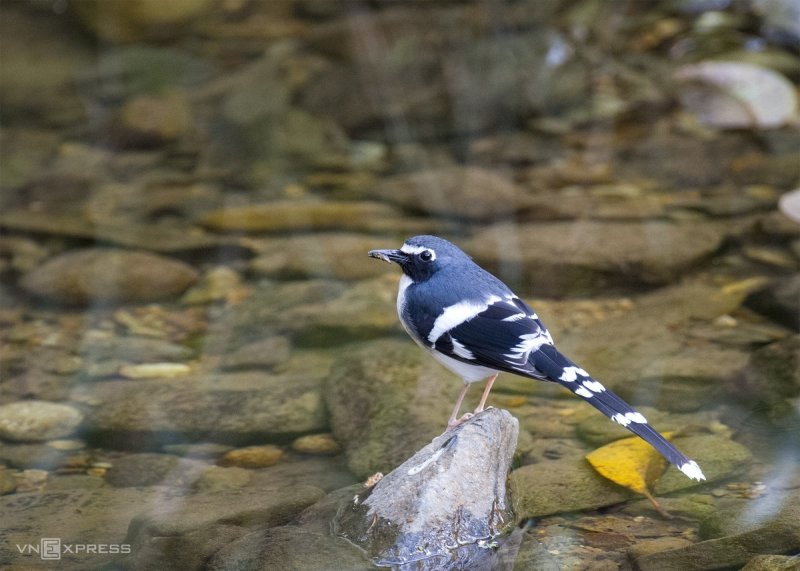 Visitors to the clear streams can also observe the white-fronted water warbler, with prominent feathers with a black back, white stripes across the wings. This bird has an elegant appearance, when perched, it often moves its tail as if it is dancing. 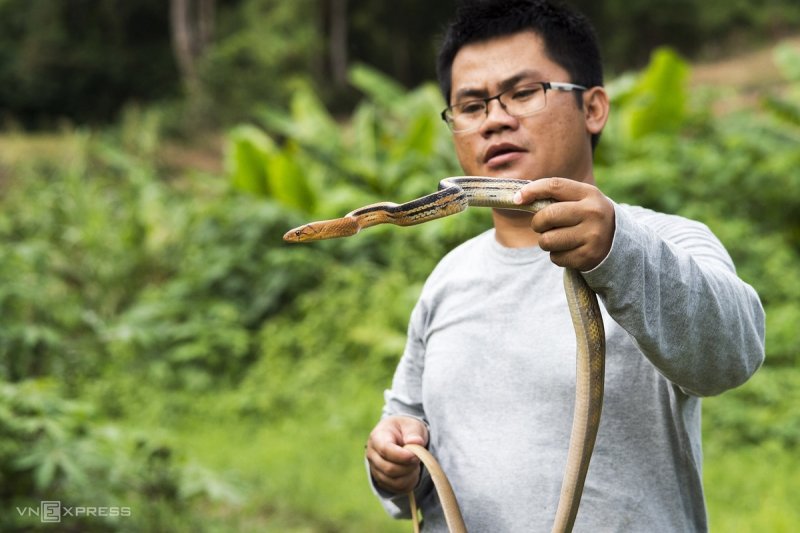 VGQ Bidoup – Nui Ba includes many types of forests. On the lowland grasslands and forests, visitors to nature can encounter many species of snakes, such as the cobra (pictured). This is a non-venomous snake, but aggressive behavior, they often raise their body, spread their neck wide, open their mouth and bite to threaten. If an opponent falters, the snake will sometimes chase until the opponent is out of range.

Mr. Nguyen Anh The (1984), often called Andy Nguyen, a guide and owner of the website Vietnambirds , introduced tours to observe birds and wildlife. According to him, visitors to the forest Bidoup should not hold snakes in their hands without experience. 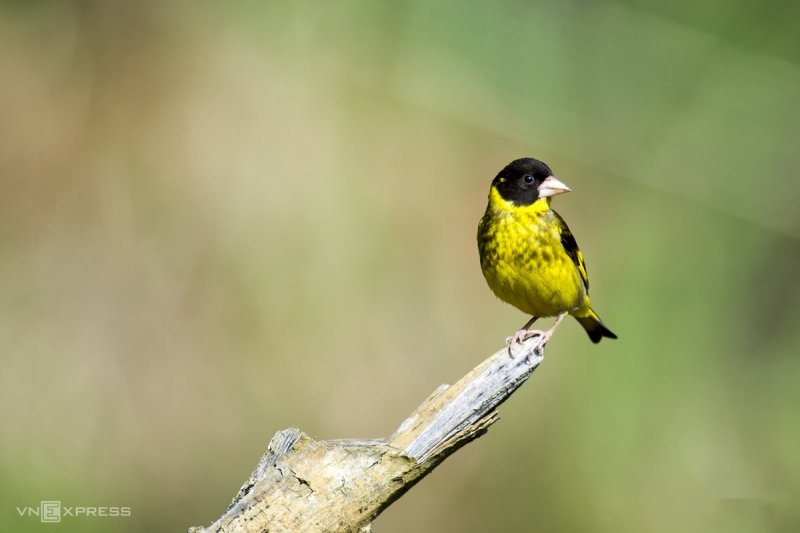 One of the endemic birds of Da Lat is the yellow-throated pine sparrow, tiny in size, with yellow-black feathers, attractive, common in pine forests and grasslands near the edge of the forest, distributed at an altitude of 1,000 – 1,900 m. Andy Nguyen said that they have a special name “Vietnamese Greenfinch” to describe the specificity that this species can only be found in our country. 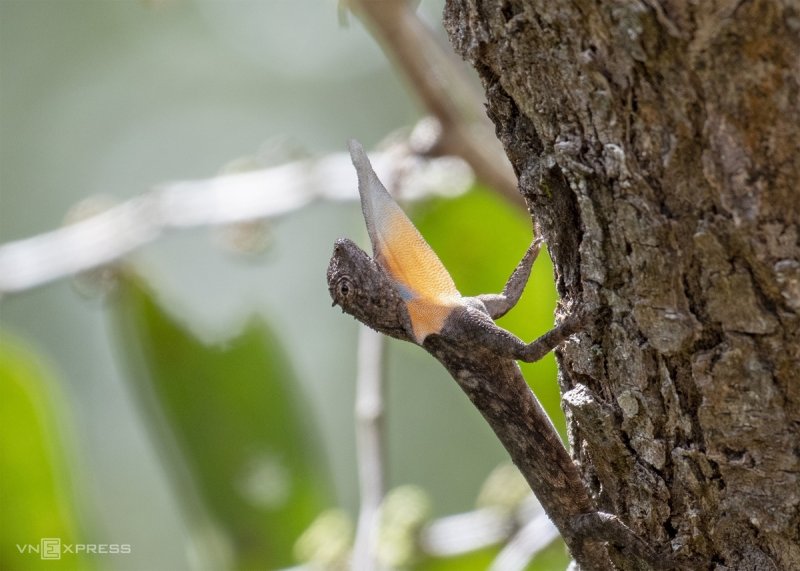 There are many short walking tours through the forest areas for visitors to experience observing reptiles, amphibians, small animals, including Indochinese pterosaurs (pictured). This species has the ability to glide through the air, from tree to tree, very precisely and skillfully like paragliding.

“They’re able to do this thanks to specially developed ‘wings’ from the skin membrane that attaches the forelimbs to the body. When the males compete for territory, they have their own dance to assert their power, which is to inflate a leather pouch under the neck, this colorful leather pouch protrudes in and out with the lizard’s nodding motions. a signal of strength” shared Andy Nguyen. 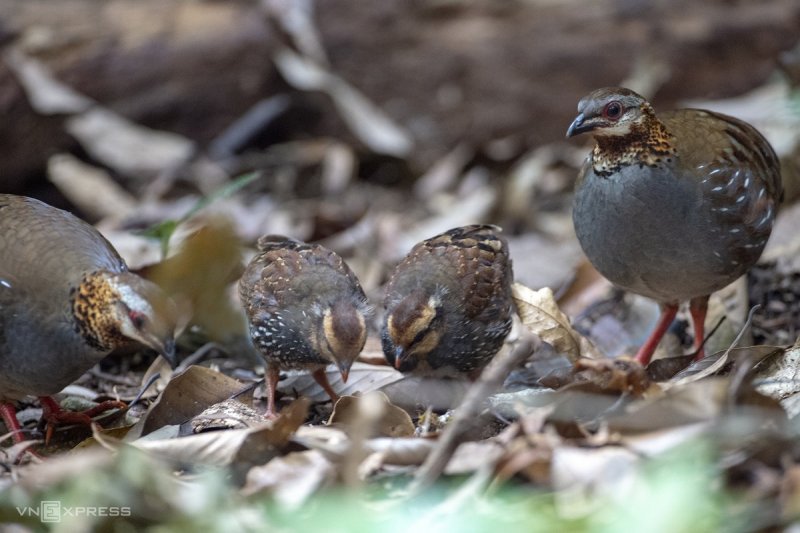 International tourists when coming to Bidoup – Nui Ba often like to take pictures of hung-throated chickens (pictured) and red-headed truncated tails. Hung-throated cocks are popular here, usually spawning in March-May every year. They are beautiful partridges and if you’re lucky, you’ll meet a family of sows foraging early in the morning. 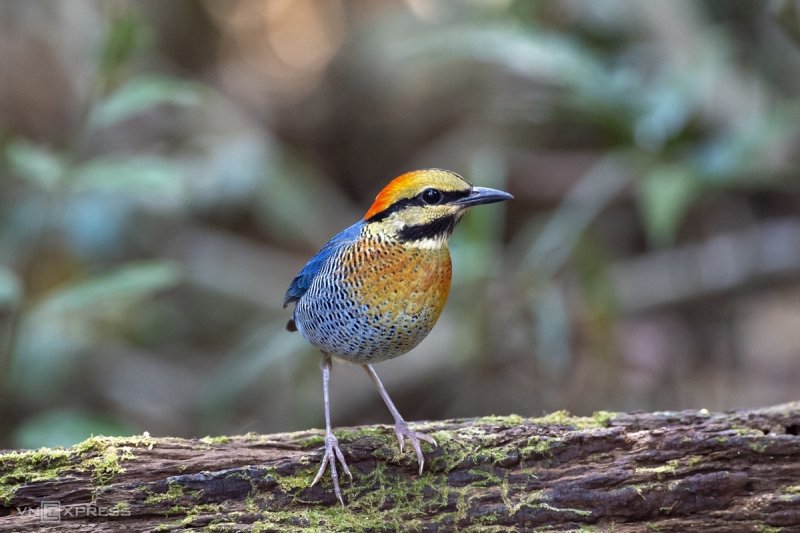 Meanwhile, the red-headed penguin is called the “prince of the night” by bird enthusiasts, with a colorful set of wings, but lives and feeds underground in the dense canopy of old forests with little light. This makes birdwatching difficult, but when it comes to seeing and photographing them, anyone is amused. 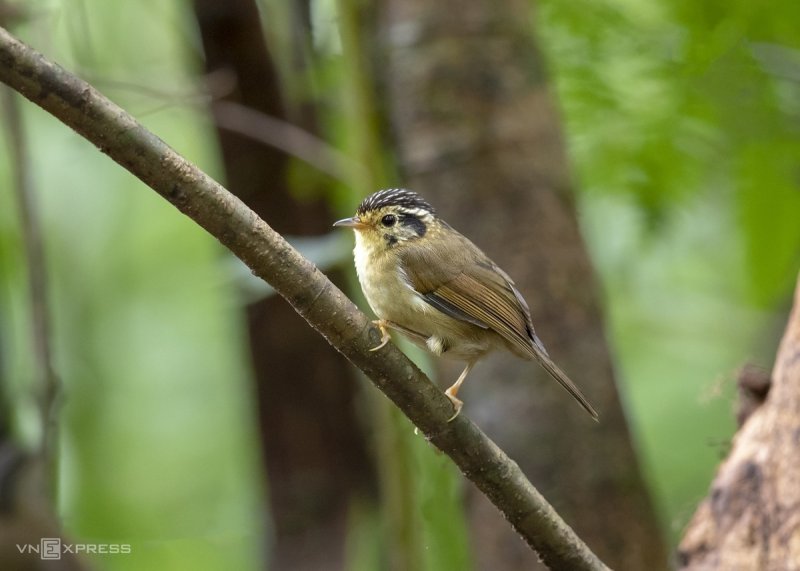 If visitors choose the Giang Ly walking route, they will observe rare and endemic birds that can only be found in the Langbiang plateau such as the black-necked squirrel. This species is small in size, preferring to chirp in the bushes near the ground with the characteristic coloration of olive-brown upper body and light brown lower body. 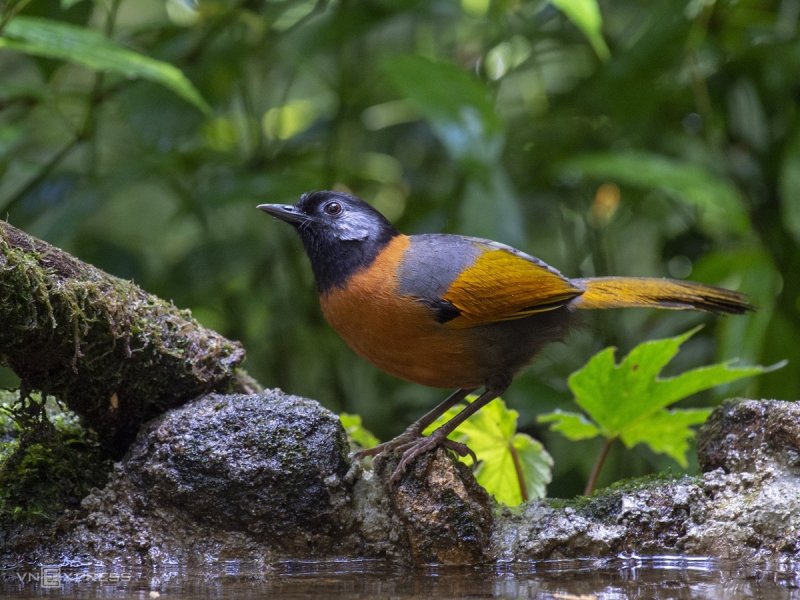 The gray-cheeked babbler is named after the scientist, Dr. Yerin (Alexandre EJ Yersin), who was instrumental in discovering the Langbiang plateau and establishing the Pasteur Institute in Vietnam. This species is brightly colored, has a black head and throat, yellow outer wings, and tail feathers, but is difficult to observe because it hides in thick foliage and bushes at altitudes above 1,400 m.

According to Andy Nguyen, young people who come to Bidoup – Nui Ba National Park like to do long-distance trekking and camp in the forest to enjoy the fresh air and challenge their body limits. The eco-tours organized by Vietnambirds are usually for guests who are passionate about discovering natural beauty. A day tour (without night camping) includes tickets to the National Park for 1.2-2.5 million VND. Walking tour of 2-3 km in the biodiversity routes of Bidoup – Nui Ba, walking while watching birds, finding colorful frogs, and taking pictures of them. The price of the tour with foreign guests has its own characteristics because it includes restaurant and hotel services.

Andy Nguyen shared that because he did not organize tours as much as before, he studied science and participated in biodiversity investigations for projects on environmental impact assessment in the country. He hopes that ecotourism articles will spread the message of protecting nature, not hunting wild animals in Vietnam. Follow vnexpress