Dustin took the whole coconut chamber and smashed it on the ground, then used a knife to split each coconut, as proficient as the Vietnamese.

Dustin Chevrier from the US has lived and worked in Vietnam for more than 6 years with the main job as an English TV presenter. He set up a YouTube channel Vietnam Meets Dustin posting videos related to life and cuisine in Vietnam and received more than 600,000 subscribers. At the same time, he also opened a TikTok account that attracted more than 200,000 followers.

Dustin has just posted a video of making sugared coconut water, attracting the attention of the community. The video is more than 17 minutes long, recording the scene where he went to find and cut 5 chambers of water coconuts to bring home for lunch refreshments. The way he handles the 8 kg water coconut chamber and separates the pulp from each fruit makes viewers excited because he is so proficient.

Dustin said he had made sugared coconut water before, but because he added too much cold water, and the community said it was not good, he decided to do it again. Dustin prepared a large knife to go along the country road next to the canals and canals to find nipa, this tree is abundant in the West, so it is not too difficult to find, in a moment he brought back 5 large rooms of nipa.

“In the past, I didn’t know how to chop nipa coco, I just grabbed a knife and cut it straight into the coconut chamber, so I couldn’t do it. Now it’s very easy, just hold the coconut stalk firmly in my hand, then raise the whole coconut chamber high, pounding hard on the hard ground. then the nymph will come out on its own, then use a knife to split it and use a spoon to separate the copra,” Dustin shared.

Through the split coconuts, Dustin learned some experience, for example, should choose large coconuts to have copra, small fruits will be all fiber. When separating the fruit, if the water is splashed, the coconut water is still young, without the pulp, and if the copra is milky and hard, the fruit is too old and inedible. He chooses the fruit with soft, flexible pulp is the best, when eaten, it will have a sweet taste. Besides, if one looks outside, one can also distinguish young and old fruits by their dark and light colors. 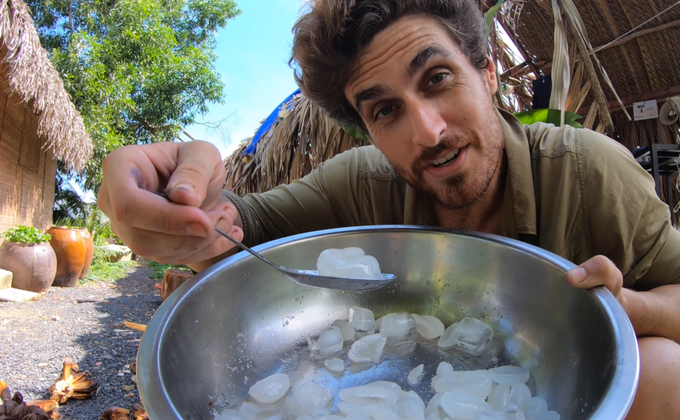 The finished product has a sweet and cool taste. Photo: Vietnam Meets Dustin/YouTube

The copra part after separation is washed by Dustin, stored in a large bowl, then mixed with granulated sugar and ice. “If the house has little ice, we can marinate the coconut in the refrigerator for a while for a more delicious dish,” he said the weather in the South is very hot at noon, eating iced water coconut is great, a sweet snack. cool, cool. However, he thinks this dish must be very expensive because it is not easy to get the copra, his hands are scratched and the plastic is full.

After watching the video, many viewers left comments such as “You know too many secrets of our country”, “This dish is delicious with condensed milk”, “Thank you for sharing your experience. live in Vietnam”… Follow vnexpress