HANOI – Packed carefully with 200 flags, Mr. Nguyen Van Phuc threw himself into the rain, drove to the district post office more than 10 km away from home, and sent it to Son La in time for National Day.

The capital and many provinces are on quarantine days because of Covid-19, so the transportation of goods is difficult, the need to buy flags to decorate and celebrate the occasion of September 2 this year has decreased. After sending the goods, the 45-year-old man returned to do a job that he has maintained for many years, which is to bring some flags to give to his fellow men who are about to leave the village to work far away. He stopped by a friend’s house in Thanh Tri, but did not call his friend, but quietly changed the new national flag to hang in front of the house, then wrapped the old flag and brought it home. 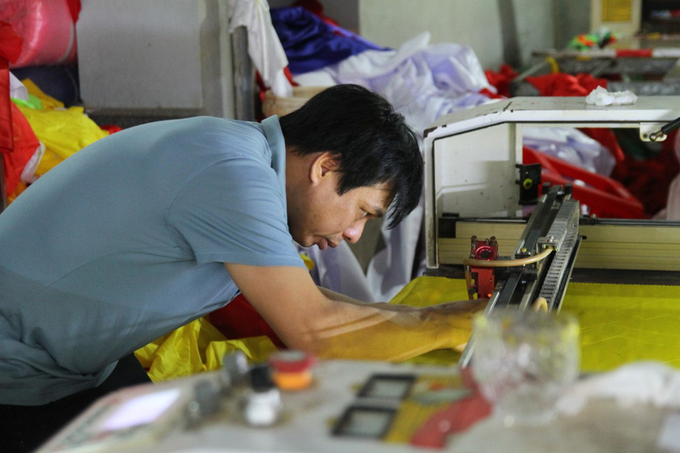 In a three-room house located in the middle of Tu Van village, the sound of his wife’s sewing machine, Dao Thi Duyen, sounded alone in the middle of a rig of more than ten machines lying dormant since the outbreak of the pandemic. Duyen folded four pieces of red cloth to get the centerline, then skillfully wrapped the yellow star in the middle, sewing a straight line. For nearly 30 years in the profession, it only takes her about 10 minutes to perfect a national flag.

She said that in previous years, close to the National Day on September 2, her family had to recruit more workers to work overtime to keep up with orders from localities across the country. Many children in the village also take advantage of going to their brothers and sisters’ house to work part-time, earn money to buy books, and then sit and listen to the old people in the village telling about the origin of Tu Van embroidery village becoming a famous national flag sewing village.

Mrs. Dang Thi Dam – Phuc’s mother said that Tu Van village has had folk embroidery since the 16th century, but embroidery and flag sewing has only been around since 1945. That year, to prepare for the day of the general uprising, the Committee The revolution has returned to the village to order red flags with yellow stars. “My father said that the biggest, most beautiful and sharpest flag was made by the people of Tu Van village,” she recalls. When peace was restored in the North, tailors and artisans in Tu Van village were recruited into the red flag cooperative on Hang Bong street to produce the national flag. “At that time, lychees were bought from La Khe village, Ha Dong district, while tassels were only bought from Trieu Khuc village, Thanh Tri district,” Mrs. Dam said. 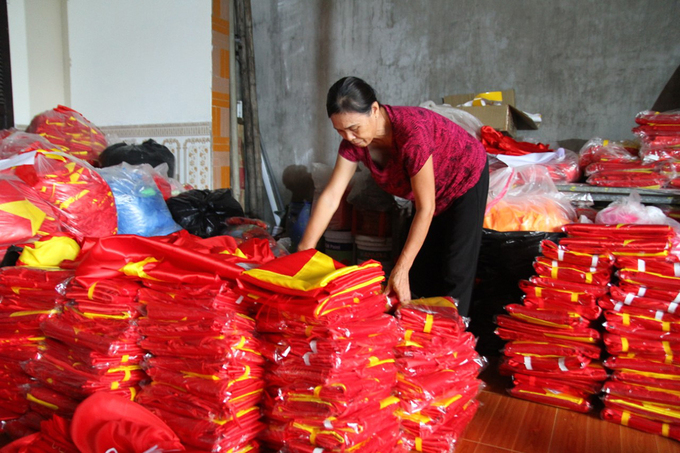 Dang Thi Dam, Phuc’s mother is helping her son fold the flag and pack it into a plastic bag before delivering it to a customer, on the afternoon of August 31. Photo: Lenh Thang.

After 1975, especially when the economy opened, many people in the village put aside embroidery and flag sewing to trade. “More than 30 years ago, when my son was young, I told him to learn the traditional craft of his family and ancestors. Seeing that Phuc learned quickly, my wife and I supported our son to produce flags on a larger scale to keep them safe. preserving the traditional craft”, the 62-year-old woman said, adding that her son’s name “Fu” is also the hope of restoring the village’s traditional craft.

Before opening a factory to sew the national flag, Mr. Phuc also started from the first step of embroidering the flag. Mrs. Dam supported her son’s production by machines, but still forged his son: “In order to be able to perfect a national flag, you must first know how to embroider each golden thread on a red canvas. This is the foundation for tailoring grows and survives, just like a tree has a root”.

In order to keep up with the requirements of the market, Phuc and his wife applied modern machinery to sewing flags, so that the products are beautiful and accurate, and the productivity is higher. During the peak times, he only kept the orders for sewing flags and the orders for embroidered flags, which he divided among the artisans in the village. “My passion for embroidery and sewing the national flag was inherited from my father’s death, so when I grew up I chose this as a job to make a living,” the man said. He also boasted that he used to sew a 54-square-meter flag, representing 54 ethnic groups, to hang at the Lung Cu flagpole, Dong Van district, Ha Giang province – the northernmost of the country.

According to Mr. Nguyen Van Nham, head of Tu Van village, currently, there are only about 20 people in the village who keep the job of embroidering the national flag, because embroidery takes a lot of time while orders are getting smaller and smaller. Besides sewing flags, embroidered flags are still ordered by some customers as gifts and awards. Photo: Lenh Thang.

At the beginning of the afternoon, the phone rang. After listening to it, Phuc quickly turned around and informed the whole family, a customer in the South ordered more than 500 flags. On the days of separation, there is no means of transportation, orders are also reduced, only a third of the usual. Occasionally, he receives a number of small orders from localities not affected by the pandemic, still organizing street decorations. With orders in Hanoi, Mr. Phuc has to split up and use a motorbike to deliver or send a shipper to deliver the goods.

After dinner, Phuc and his wife and two children gathered together, aligning each edge of the flags that were just cut in the afternoon to complete. While working, Phuc came up with the idea of ​​organizing a family contest, embroidering the words “Determined to win” on ribbon fabric to convey the belief that Vietnam will win the Covid-19 pandemic. Follow vnexpress