Bat Pagoda is one of the oldest pagodas in Soc Trang province, more than 400 years old. The pagoda’s Khmer name is Wat Seritecho Mahatup. The Kinh and the Chinese read Mahatup as “Maha”, so the pagoda is also called Ma Toc pagoda.

For many years now, the pagoda has attracted tourists from all over the world thanks to its unique architecture and the sight of thousands of crows and horse bats dangling from the tree branches in the temple garden. In addition, the pagoda also intrigues visitors about the story of five hoofed pigs that were raised and buried here. The monks in the Bat pagoda said that normal pigs only have 4 hoofs, but for 5 hoof pigs, the Southern people do not dare to raise, sell or cut meat. They believe that the five-hoofed pig is “the essence”, the person who turns into a pig, the family that adopts this pig will be unhappy because of being harassed. Therefore, any house with 5 hoof pigs will be sent to the Bat Pagoda to look after, take care of, and listen to Buddhist scriptures to practice to erase their sins.

The five-hoofed pig was first raised by the temple more than 30 years ago, brought by people in the area, the pigs are left free in the temple, the monks will feed the pigs whatever they eat, sometimes they go out to eat. Then find your own way back to the temple. Pigs are cared for until they die, then cremated and buried. At present, the graves of 5-hoofed pigs are still behind the temple, making visitors curious.

Later, the Bat Pagoda did not adopt five-hoofed pigs because there was no place to park the manure, and if the pigs were allowed to roam freely, it would affect the environment and landscape of the temple. Local authorities have also coordinated to bring five hoof pigs to raise elsewhere. However, the story of the five-hoofed pig for decades has added to the mystery of this hundred-year-old temple. 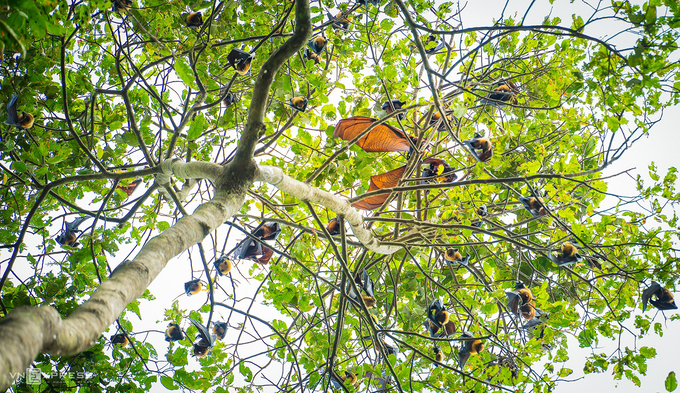 Thousands of bats hanging on the branches are one of the features of the Bat Pagoda. Photo: Huynh Phuong

Bat Pagoda has a landscape close to nature, the wild habitat of bats blends with delicate and dignified Khmer religious architecture, making this place a special and unique beauty. After visiting, visitors can enjoy jaggery juice, purple breast milk and choose to buy Khmer specialties sold in front of the gate or along the entrance to the temple.

The road to Bat Pagoda is convenient to move, from the center of Soc Trang city, visitors go to Le Hong Phong street, nearly 2 km, meet the welcome gate of the Bat Pagoda tourist area and turn right on Van Ngoc Chinh street, ward 3, go a little further. is coming.

Besides the ancient beauty of the temple has formed several hundred years, ancient trees are the habitat of thousands of bats. Visiting Bat Pagoda in Soc Trang, besides the meaning of burning incense to pray for the family and society peaceful and happy, most travelers are inevitably surprised to admire the bats dangling under the canopy of old trees. 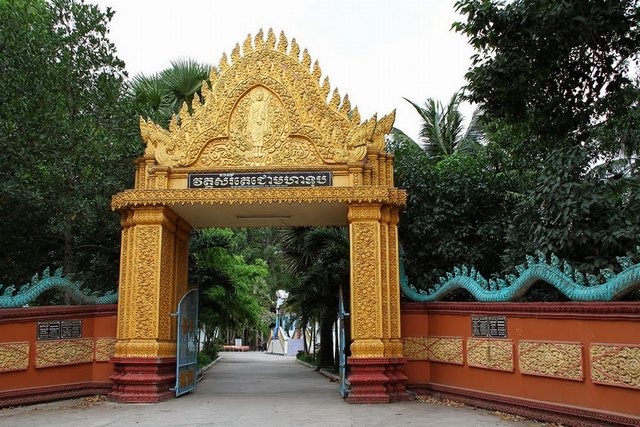 The gate of Bat pagoda

The name of Bat pagoda

Bat pagoda has a real name which was transliterated from Khmer is Wathseraytecho – Mahatup, commonly known as Ma Toc Pagoda or Bat Pagoda because the temple has many bats living. Currently, from the fork of Le Hong Phong street and Van Ngoc Chinh street, it can be considered as a “Phum Soc” (village, hamlet) having a large of Khmer people living by cultivation and farming. 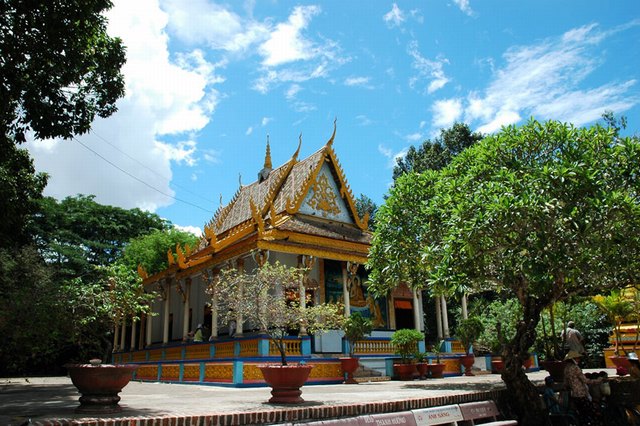 According to Khmer’s translation, Maha is great, Tup is the resistance, Mahatup is translated as “A great resistance”. In ancient times, this land took place a fierce battle of the peasant movement rebelled against colonial feudalism, also took place in other places of fierce fighting but failed, only lands at Bat Pagoda won and then people gathered here for a living. Since then, they believed this land is the land of peace, so they built the Buddhist temple for religious activities for their hamlet.

The history of Bat pagoda

According to the temple’s ancient bibliographies have left: Bat pagoda started construction in 1569 in the solar calendar, Mr. Thach Ut organized to build the pagoda and has undergone 19 lifetimes of Venerable. So far, the temple was restored many times. In August 2007 due to the Buddhist burning incense cause unintentional arson, the Bat pagoda was burnt. 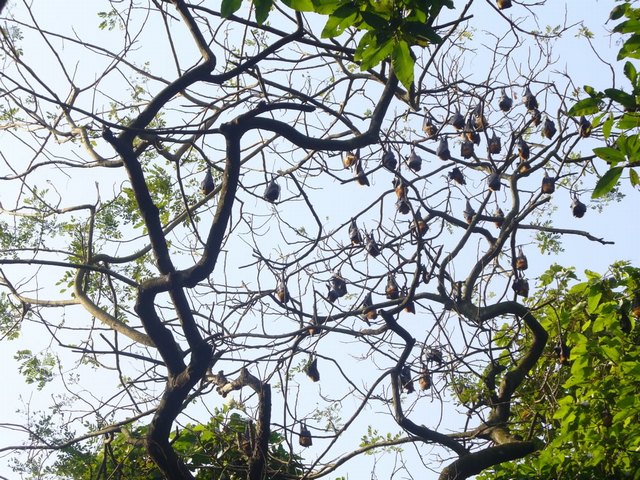 The bats at Chua Doi Soc Trang provincial government has helped to rebuild the main hall of Bat pagoda with a budget of 4 billion VND. Less than 2 years, the new and magnificent main hall was finished in the joy of thousands of Buddhists. The heart of people in the hamlet and local government helped each painting, each pattern array of the temple more brilliant and beautiful.

The Khmer architecture of Bat Pagoda

Bat Pagoda is an overall architecture consists of: the Main Hall, Sala, the synagogue of monks and believers, living room, bed rooms of the abbot and the other monks, the tower to put ashes of the dead… The works are housed in a big campus with many ancient trees, an area of about 4 hectares.

Overall, the entire of the architectural ensemble is balance, it makes us think that’s a pattern forest with harmony and neat layout, smooth and impressive contours… exudes the spirit of industriousness and creativity through skillful hands of the Khmer. 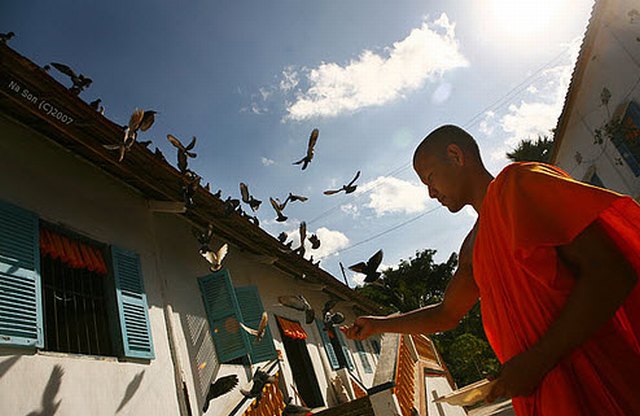 The birds at Bat pagoda

The campus of the temple is ancient with old trees to towering occupies the space from outside the gate to the backyard of the temple. Besides the main hall, many other quaint building also creates an air of mystery to the tourists. Inside the precincts, there is a large fish pond with cool space surrounded by lush greenery.

The bats live in Bat Pagoda in Soc Trang

Perhaps, the most special thing in Bat Pagoda is the bats. Any traveler after visiting the temple, listening to music, also focused in the backyard of the pagoda to look at a lot of bats. Occasionally, bats spread their wings to fly from this branch to another branch.

Bat is winged mammal family, the largest bat weighing 700 – 1.000 g, the length of their wings stretch to either side is from 1.1 m -1.5 m, the fastest cruising speed is from 50-60 km / h. Bats are mammals, the breast is two side of their armpit, with mines like Miniature Pinscher species, the mouth has sharp-toothed to gnaw. 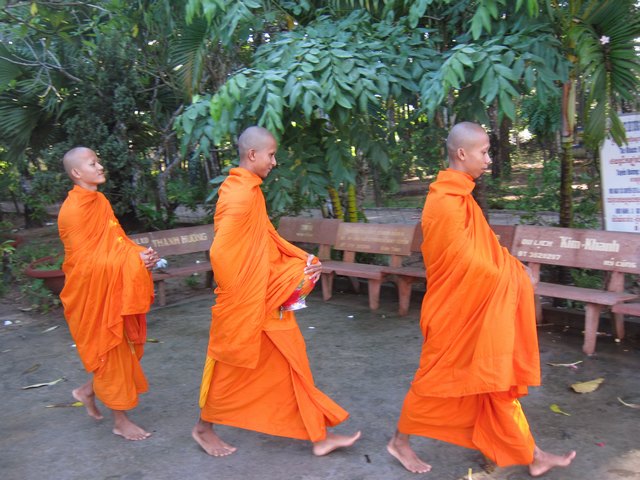 The Monks at Bat pagoda

Bats feed on fruits, (do not eat rice or meat). Bats feed at night, sleep in the daytime. Bats have two legs, each foot has five toes and having claws bent like a sharp hook, on each side shoulder has a sharp hook, they do not stand on the tree that using legs hold twigs turning upside down, hanging their head dangling.