DAK LAK – From the roses given to his mother, seeing many people asking to buy them back, Viet Anh came up with the idea of ​​​​opening a rose farm. To date, he has more than 10,000 roots. 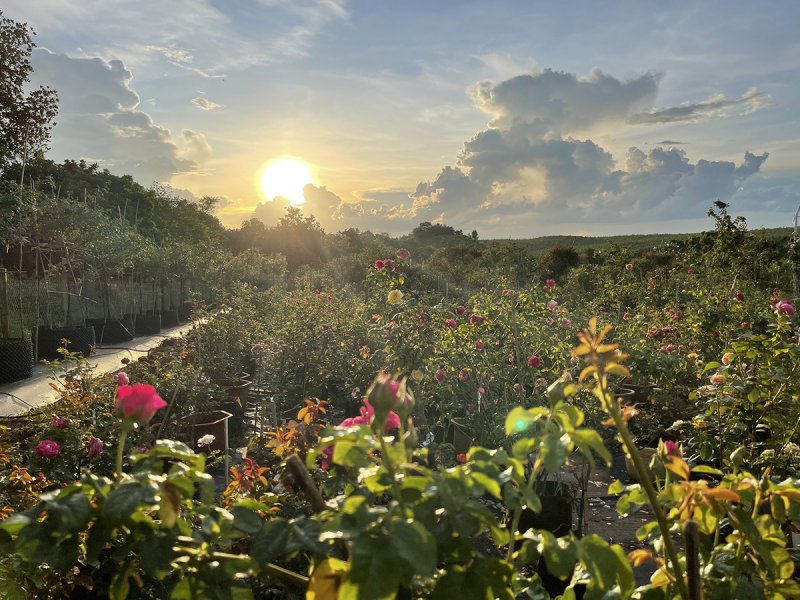 Three years ago, Nguyen Viet Anh, born in 1992, asked to be discharged from the army, left the police force, and returned to his hometown in Ea Tul commune, Cu M’gar district to help his father make a mouthwash to quit smoking.

On the holidays of March 8, October 20, or his mother’s birthday, he bought a few roses because she liked them. After a year, his mother had a very beautiful little rose garden. Many people pass by asking to buy.

The idea of ​​a persimmon business began to rekindle in the young man’s mind. 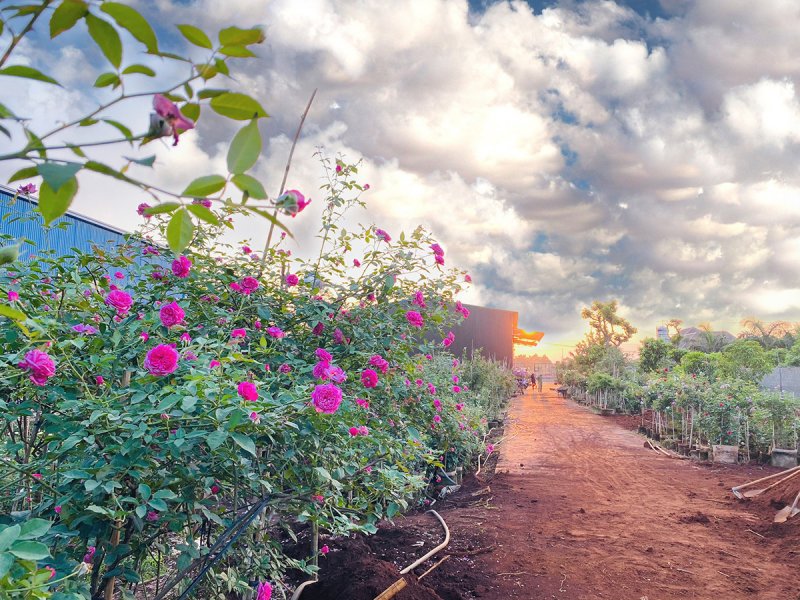 The experience of the plant variety known as the “queen of flowers” is zero. Viet Anh quit his job and roamed around the provinces in the South and in the North to learn. sold the car and then borrowed another 800 million, decided to do big business.

In the middle of 2018, the first 300 varieties of persimmon trees were imported, mainly bought in the northern provinces because of their large and beautiful flowers. Trees are gathered and planted on rented land, 3,000 m2 wide in an industrial park. Learning from other gardeners, watering, fertilizing, etc. is done by Viet Anh according to the correct process. 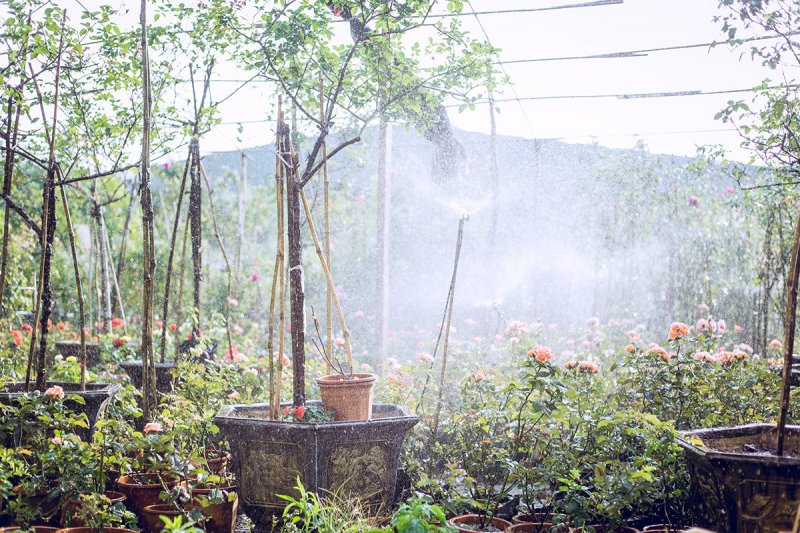 But the first “stumbling” soon came to the young man. Climate Dak Lak has only two rainy and sunny seasons. The rainy season is very long, the sun is dry, and it is different from the weather in the North. Although I have learned about techniques and how to take care of each different type, many plants bring back small flowers with few petals, pale colors,s and often get sick. In the rainy season, the tree is infected with fungus and dies in mass. For the first time, Viet Anh lost several hundred million. 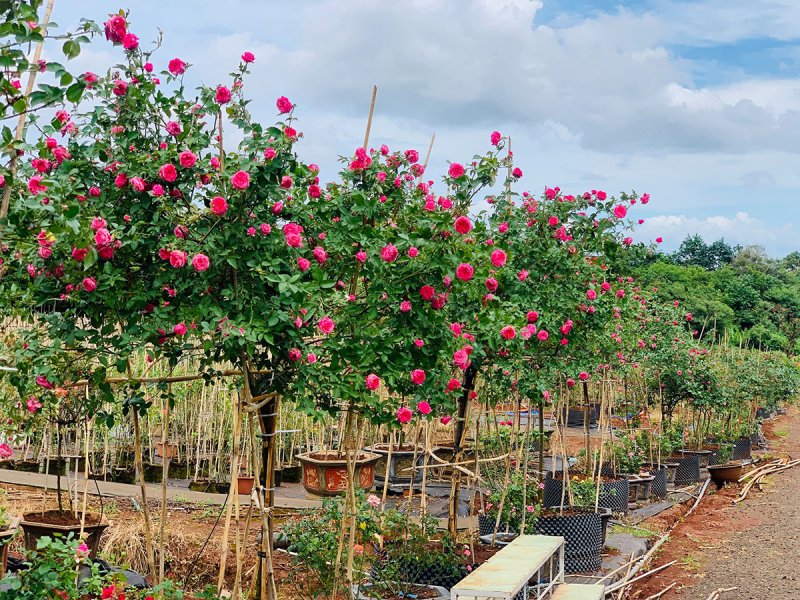 Money lost, this guy again scoured flower groups to learn the secret. Every day he stays in the garden from 6am to 9pm, stops watering, trimming, and monitoring pests. He also taught himself how to make organic compost from soybeans or manure from cows, chickens, and goats.

On rainy days, worrying about the roses dying from flooding, at night Viet Anh put on a raincoat to punch holes for drainage and tie up big trees to avoid falling.

Working every day continuously for ten hours a day, sometimes too tired, he fell asleep in the middle of the garden. Results after 6 months, from a white guy with a milky face, Viet Anh lost 5kg, his limbs were scarred and black. 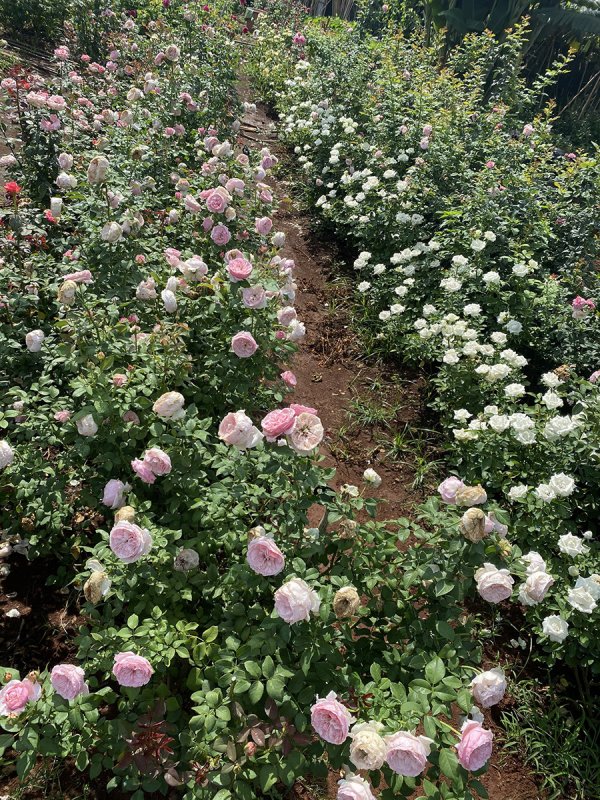 Perseverance and knowledge paid off. After several months, the rose bushes were free of pests and diseases and produced dark, multi-petaled flowers as desired. The soil is also porous, the fungus is also gradually reduced. 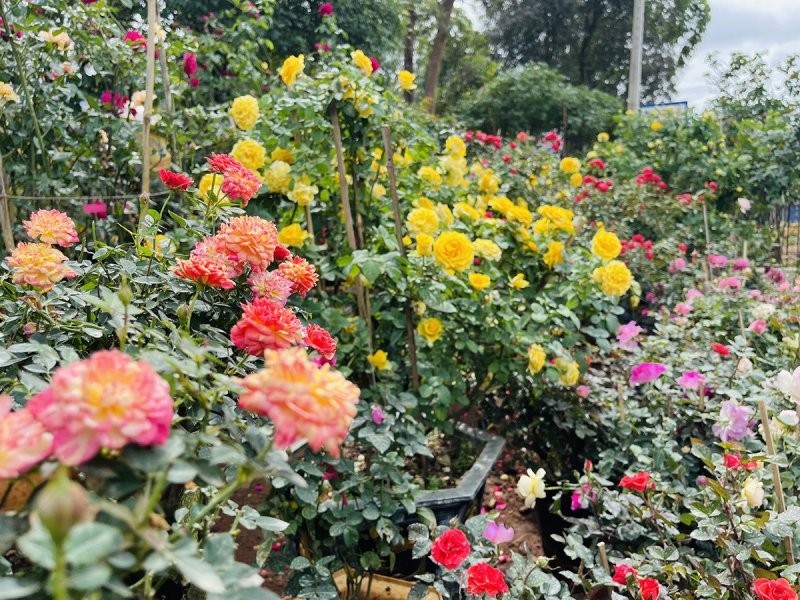 But that is not the only difficulty. Because the garden is located in a low-traffic location, only a few trees can be sold each week while labor, fertilizer, medicine, electricity and water cost 20 million VND per month. In the first half of the year, every month, there is a loss of 20-30 million dong.

Viet Anh borrowed more money, rented a new piece of land near the road, brought the whole rose garden there to sell. Pink is beautiful and eye-catching, there are many people passing by, the first month has changed. From the 7th month onwards, the number of trees sold increased from a few dozen to hundreds. Every month Viet Anh earns from 50-60 million, enough to cover his farm. Capital rotation also helps the number of trees in the garden increase. 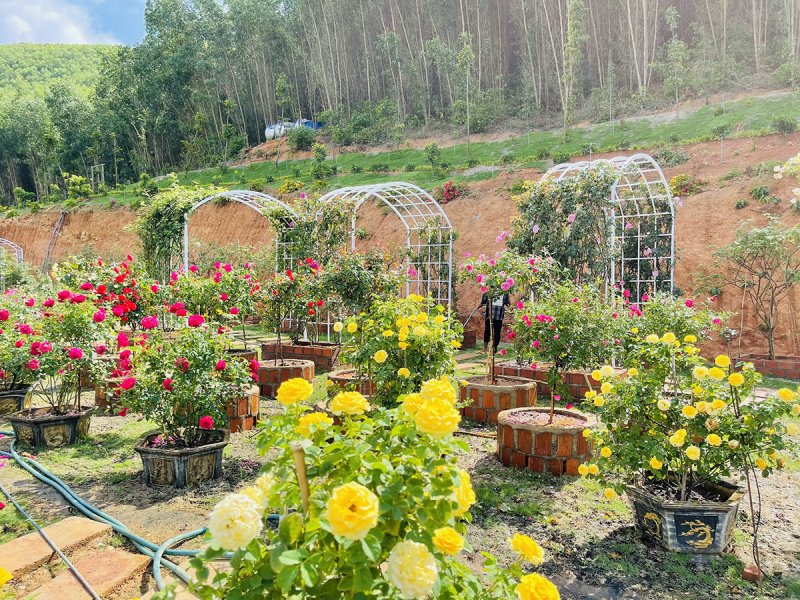 Nearly 7 km from Buon Ma Thuot city center, Viet Anh’s farm is currently considered one of the largest rose gardens in the province.

More than two years of establishment, the farm has 300 varieties of flowers with more than 10,000 woody roots, shrubs and vines including both internal and external roses. The price of persimmons ranges from a few tens of thousands of dong to the old persimmons with a lifespan of decades that cost hundreds of millions of dong.

Before the Covid-19 epidemic appeared in Dak Lak, in the peak months, this garden brought in 400 million VND a month, creating jobs for 10 workers. 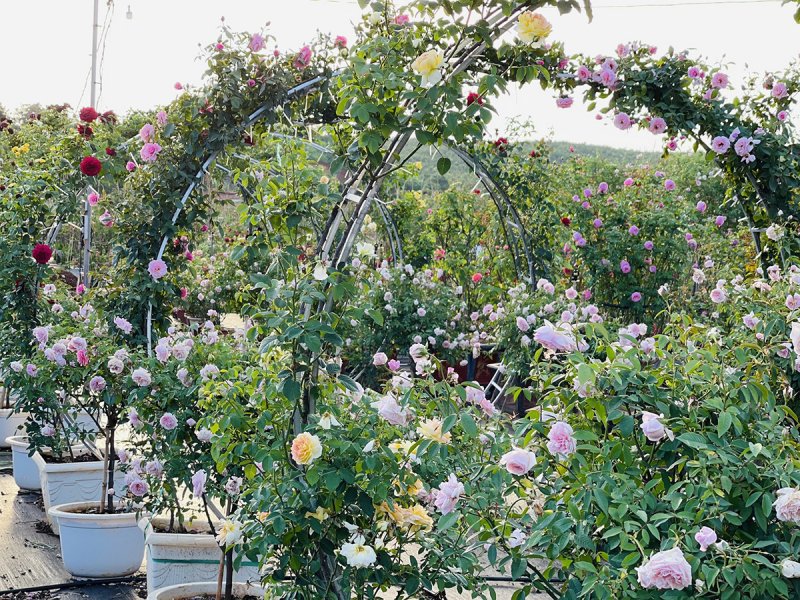 Customers buy plants at the farm, if they die, they can exchange them, the flowers don’t bloom beautifully, and the staff comes to the house to guide or bring the plants to the garden to take care of them. Guests from far away are meticulously instructed how to take care of fertilizers. After a while, the number of visitors to the garden is increasing, not only in Dak Lak. 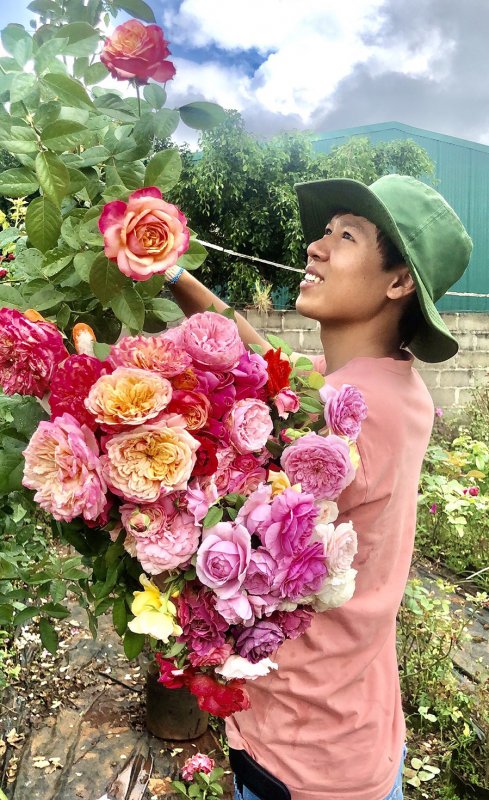 In early 2021, to increase income, Viet Anh also launched a tour to participate in the experience at the garden on an area of ​​​​18,000m2. No need for an architect, no need to draw a drawing, all garden design ideas are drawn up in his head to his liking.

The boy’s plan is to import more trees to turn the farm into the largest rose garden in the Central Highlands. But before it was completed, Covid-19 hit. In the past few months, even though a business has stalled and revenue has decreased by more than half, Viet Anh still manages to pay enough wages for employees. I believe I am strong enough. During the epidemic days, this guy feels gardening is a relaxing activity that has a very good physical and mental healing effect. 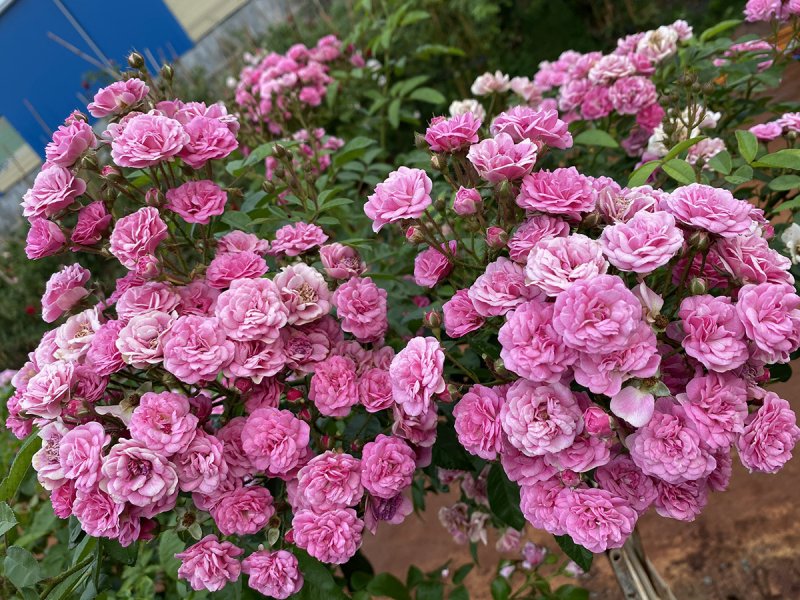 Every day, waking up at 6am, the first thing Viet Anh does is take pictures and record the changes of the garden. After eating a simple breakfast, he started taking care of plants, watering, pruning, planting flowers… At noon, he went to consult customers, in the afternoon put on protective clothing and walked along the sunny dirt road in the garden. , hoeing, fertilizing. He often forgot to eat, sometimes he stayed in the garden until the evening, even late at night. 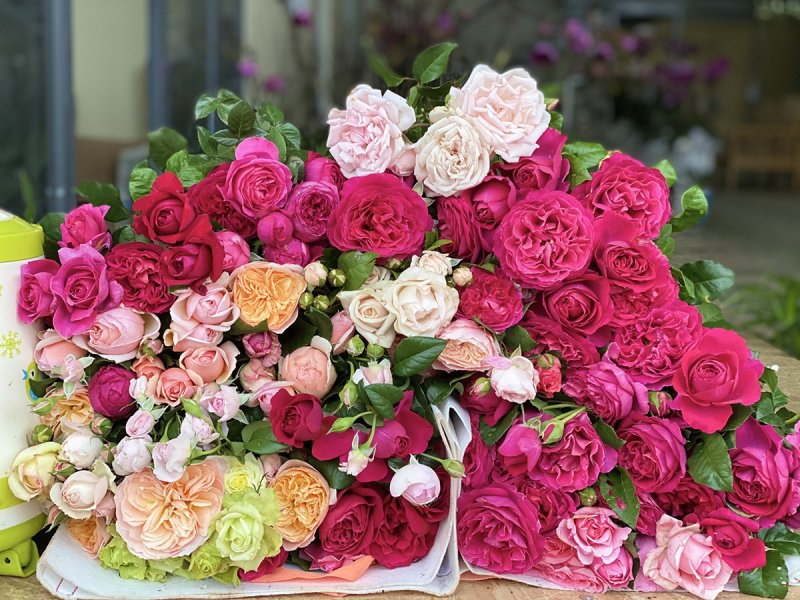 In the eyes of many people, this guy’s way of doing things is no different from a “crazy man”, but he does not feel that way. “The flowers and leaves in the garden are like my children, I miss going away very much. So I often take advantage of going out when it’s raining, and when it’s sunny, I usually stay in the garden all day,” he said. Follow vnexpress