Every September, Man’s group of more than 10 friends goes on the road. From colleagues, someone became a life partner after the trip.

“Until 2020 is the 6th time the group goes together”, a member of Hau’s group began the story when talking about his group of friends and trips.

“Hau” – the way to read the Phu Yen dialect from the word Hoi, means a group of friends. This is also the name for a group of friends of Nguyen Duc Tien Man, born in 1991 from Thua Thien Hue. The man said when he was 23 years old, he was a student who had just graduated from college and worked in an auditing company in Ho Chi Minh City. Here, he met many friends of his age, from many provinces, mainly in the central and southern regions, with the same travel interests. You guys get to know each other and gradually become close, Man considers this as a miniature class of his graduate school.

In 2015, the group of friends went together to Hanoi, Ninh Binh, Ha Giang, and then climbed Fansipan in Lao Cai. Feeling overwhelmed when driving on winding passes, seeing firsthand the craziness and majesty of the highest mountain in Vietnam, the magnificence of the Dong Van rocky plateau, the poetic beauty of the Yen Minh pine forest. , nostalgic space at Pao’s house… All imprinted in the memories of young people. Since then, every September, the group of friends will meet again to go to the North to travel to the provinces by motorbike and combine climbing a mountain.

By 2020, the group has traveled through many northern provinces and cities, among which the most impressive destinations are Fansipan, Ta Xua, Lao Than, Pha Luong, Chieu Lau Thi peak, the western pole – A Pa Chai. four great peaks of the pass” Ma Pi Leng, O Quy Ho, Pha Din, Khau Pha. In 6 years, the group went together on 20 large and small trips, from the plains to the mountains to the sea, all over the country. 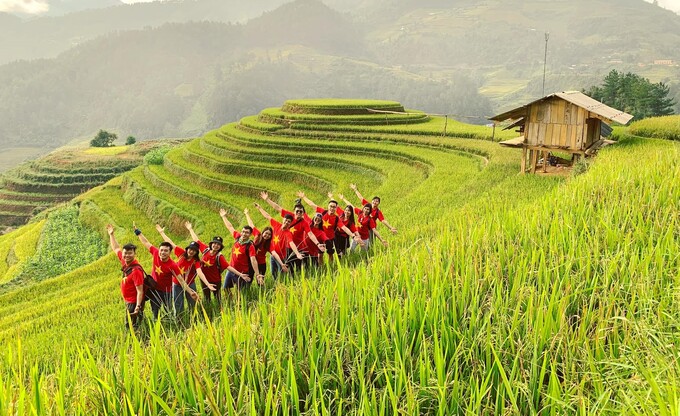 Until the next appointment, when the rice on the northern terraced fields is in season, it is also time for Hau’s group to set out to explore. Photo: NVCC

Each year, the Hau group travels together twice, the longest trip is 10 days and the shortest is 2 days. With a long trip, the group applied for a leave of absence at the same time to go together, the rest took advantage of the weekend to travel. “When we were still working at the same company, there were dozens of people once when we asked for leave, the boss was surprised because we took a break, the company took someone to work. But I went when the audit season was low, so the boss didn’t complain. In the third year, the boss supported and asked us where we were going next year,” Man said.

In the first year, the group did not know the road, missed many plans, arrived at the homestay until 9 pm, was sometimes caught in the rain and people in the group got lost. Everyone feels so reckless when recalling the scene of driving on the pass in the dark at night when it was cold and rainy. From there, the team redesigned shorter routes to travel without delay and have time to admire and take pictures.

“The trip to Pha Luong encountered a bad road, so the friends in the group could not run and had to ask the local people for help. The road was narrow, one side was a craggy cliff that they ran around in, I was afraid to lose my heart.” The man could not hide his emotions when recounting his memorable trip. 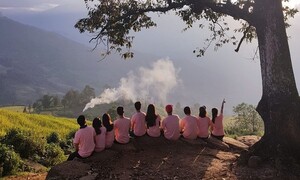 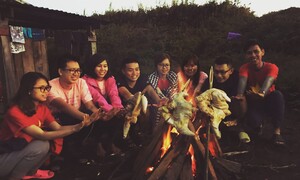 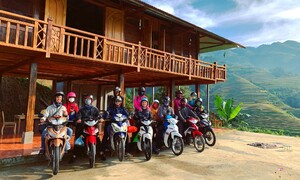 Traveling for many days, many times, but you never get bored with your companion even though there are impulsive moments. The group views traveling together as an opportunity to discover each other’s personalities. Some people are calm, serious, quiet when going to work, but traveling is very funny, making jokes, telling jokes to everyone. Everyone’s personality gradually revealed, not hiding anything from each other. Just like that, each person is a colorful puzzle piece for laughter throughout the journey.

Perhaps that’s why, through each trip, you gradually understand each other better, become closer, both as colleagues, as confidants, and some also become life partners after such trips. The story of Le Thi Kim Dung and Tran Bao Trung is an example. From the first trip in 2015, Trung began to have feelings for Dung, but after 2 years, the couple officially started dating. “When I went to the Northwest for the first year, my husband was the driver, and I sat in the back. I had a habit of falling asleep, he pulled my hand to hug him to avoid falling. At that time, I didn’t mind anything, as long as it was safe. Perhaps from such times, her husband thought that she should “listen” to him, “Dung smiled, recalling.

According to her, traveling together will help you realize if you and your partner are compatible with each other, in terms of life, eating, hobbies… In 2019, after the trips to the South to the North, the couple also returned. a home and continue to be passionate about conquering new roads with the Hau guild. 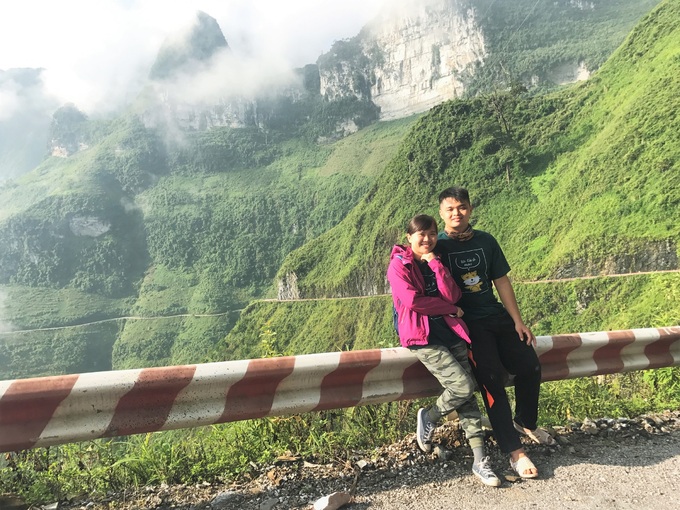 In the past 6 years, asking the group if they have any regrets, people say they regret not having more time to travel together. The group also has many friends changing jobs, the vacation schedule is not as flexible as before, the trip is not as crowded as before, but the “tradition” of going out is still maintained. Up to the appointment again, the largest year there are 15-16 people, the last year is over 12 people.

“In 2018, after climbing Lao Than 2,860 m, I said that my legs are tired from walking forever, next year can everyone go to a resort, everyone agrees and supports me. But next year everyone people still go hiking and trekking”, Man laughs and thinks about his interesting friends. Follow vnexpress