Although only small bridges crossing the river, thanks to the special architecture and ancient beauty; Tiled bridges bring unique beauty to each land of the country, and are also works imbued with national cultural identity. 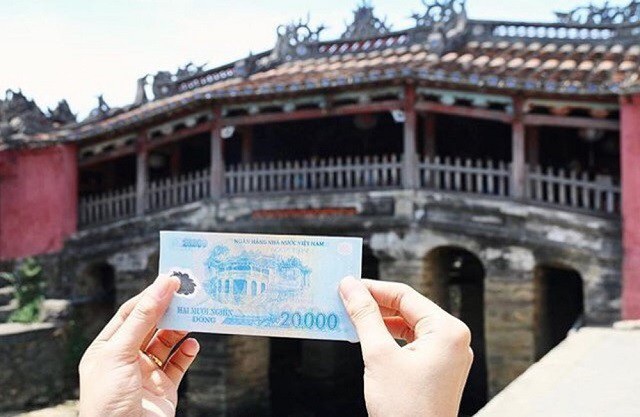 Hoi An Covered Bridge appeared on the back of the VND 20,000 bill

The Covered Bridge was chosen as the symbol of Hoi An city, appearing on the 20,000 VND bill. This is a work built by Japanese merchants who came to Vietnam to trade in the 17th century. The bridge is about 18m long, crossing the creek flowing into the Thu Bon River.

The imprint of the Phu Tang culture on the bridge is shown in the wooden gargoyles at the two ends of the bridge, one end is a dog statue and the other is a monkey statue. On the main door of the Covered Bridge, there is a large sign embossed with 3 Chinese characters, Lai Vien Kieu (meaning the bridge of friends from far away). The middle part (called the pagoda) worships a wooden statue of Bac De Tran Vo – the guardian deity of the country, specializing in controlling floods and giving happiness to people. 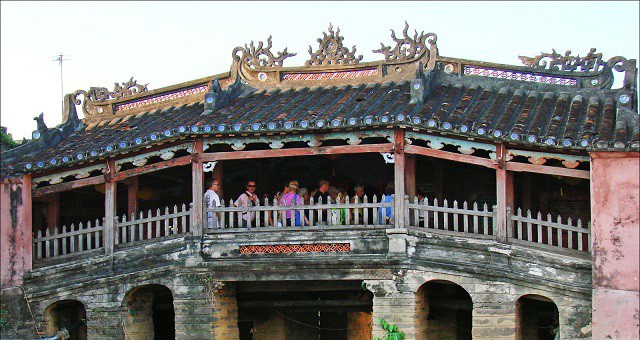 Covered Bridge was chosen as the symbol of Hoi An city.

Over time, the architecture of the Covered Bridge is now in Vietnamese style with the yin and yang tiled roof covering the whole bridge. 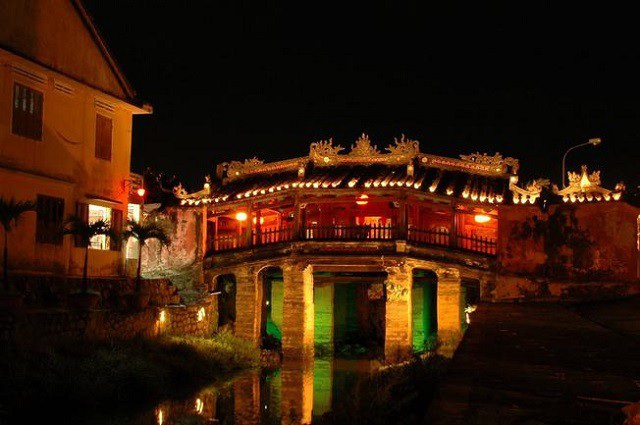 The beauty of Hoi An Bridge Pagoda at night. Photo: vntrip.vn

Thanh Toan tile bridge is about 8 km southeast of Hue city in Thuy Thanh commune, Huong Thuy district. The bridge is built in the style of “Thuong Gia, Ha Kieu”, that is, above the house and under the bridge. The bridge body is made of wood, the top is covered with a glazed pipe tile roof. Like Hoi An Bridge Pagoda, Thanh Toan’s tiled bridge is divided into compartments, each space is like a small house in a big house. The bridge is about 17 m long, 4 m wide, and is divided into 7 compartments with the middle one being the place to worship Mrs. Tran Thi Dao – who contributed money to build a bridge for villagers to easily pass through in the 18th century. The remaining six compartments all have podiums. wooden sides to rest. Thanh Toan tile-roofed bridge is one of the rare bridges with high artistic value in Vietnam. Photo: webdulichhue.com

Phat Diem tile bridge across the An River is located in the center of Phat Diem town, Kim Son district, about 30 km from Ninh Binh city.

The bridge has a rainbow-curved shape, roofed with tiles, on both sides are two rows of wooden columns and ironwood bars as a very strong railing. The bridge has 3 spans, each span has 4 spaces. The length of this bridge is 36m, the width is 3m. The two sides of the bridge have three steps, only pedestrians can cross the bridge. On the bridge is the roof of the bridge with the traditional red tile of the Northern Delta. 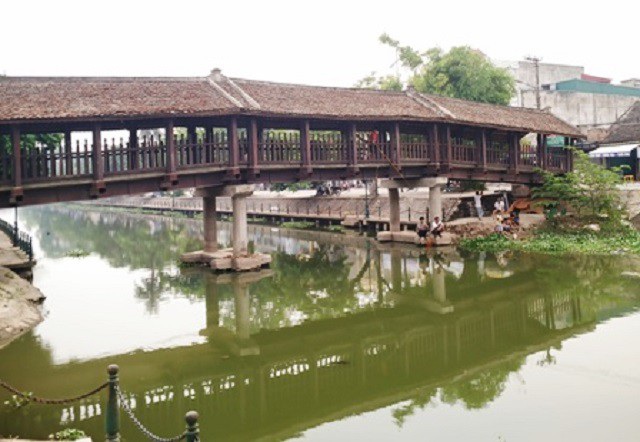 Compared with Hoi An Bridge Pagoda and Thanh Toan tile bridge, the Phat Diem tile bridge has a light and elegant appearance, showing the special creative talents of the Catholic people. This is considered a rare bridge and has the highest artistic value among ancient bridges in Vietnam. The bridge has both a traffic function and an ancient roof, moreover, it is a stopover to avoid rain and sun, a place for couples to date. 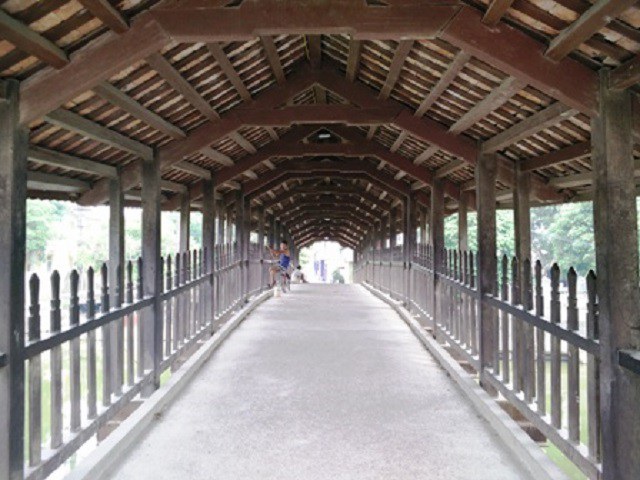 The bridge has a rainbow-curved shape, roofed with tiles, on both sides are two rows of wooden columns and ironwood bars as a very strong railing. The bridge was commissioned by Consort Nguyen Thi Ngoc Xuan (a concubine loved by Lord Trinh) to hire people to draw a model modeled after Thanh Toan tile bridge in Hue.

The bridge architecture is quite unique, the upper part with a wooden frame and a tiled roof, the south and north doors of the bridge are built of 2m high bricks; Both acts have the word “Thuong Gia Kieu” embossed in Chinese characters. The bridge abutment was built entirely of boulders lying firmly on the banks of the Ngoc River. Thanks to the sturdy pedestal, over 300 years with many historical changes, the bridge still stands.

Stop at one of the ancient tiled bridges of the country, glimpse in it a glimpse of village culture that has been preserved for generations, even though life here has taken on the appearance of urbanization, feel peace at noon. hot summer. 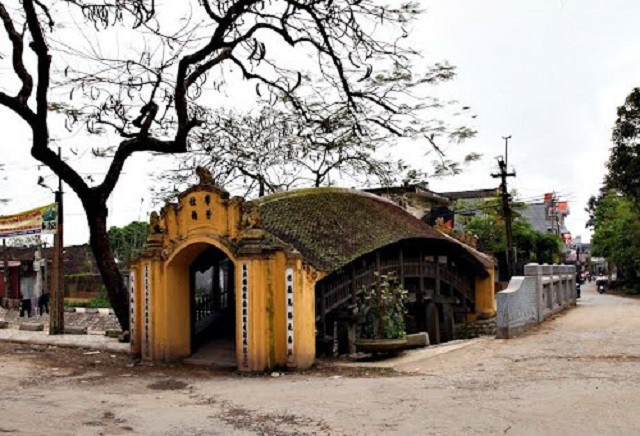 The bridgehead is carved with the image of two majestic clams holding a 4-word letter “Quan Phuong commune Kieu”. 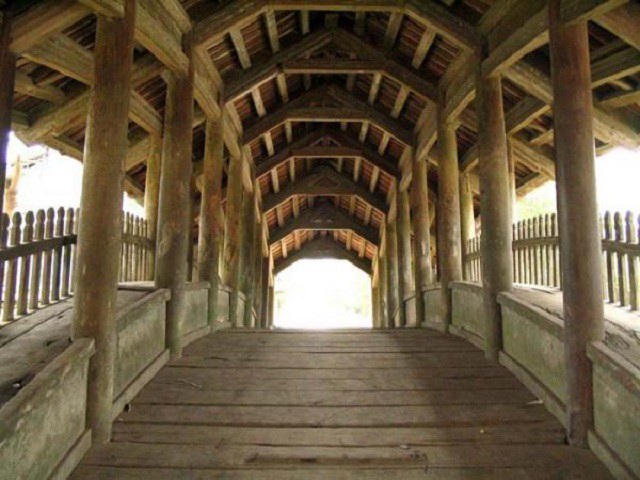 The structure inside the bridge is simple but solid

The bridge has 9 bends like a rainbow on 18 solid stone pillars. On the stone column is a system of large ironwood horizontal beams and beams to support the beams, raise the floor of the bridge, the bridge. The bridge deck is designed in two distinct parts. The floor of the bridge is 2m wide, consisting of many ironwood slats put together on a row of bent beams, and there are many shorter wooden slats that are rounded to create many floating hours for pedestrians to avoid slipping. The two sides of the bridge are two rows of corridors that are also curved so that pedestrians can stop and rest, outside the corridor is a row of wooden railings.