With a height of 3,143m, Fansipan is not only the highest mountain in Indochina, but also contains many thrilling stories, difficult to explain.

In 2010, Hoang Lien Son forest experienced a terrible forest fire. When the fire was burning like Hoa Diem Son and the forest rescue forces were all helpless, Mr. Tran Ngoc Lam – who was dubbed the “forest man” on Fansipan with more than 20 years of wandering in seclusion, belonged to every corner. The first heroic mountain in the Northwest – said firmly: “Tomorrow, the forest will stop burning. We’ll go see the coal piles on the Hoang Lien mountain range.” 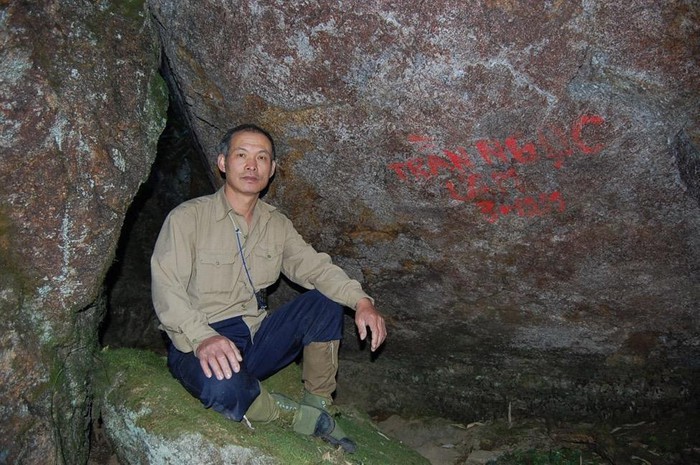 Strangely, just as he said, the next day Hoang Lien Son rained heavily, the forest was completely burned. Could it be that “forest man” Tran Ngoc Lam has the talent to “call the rain to call the wind”?

In fact, Mr. Lam’s secret “prophecy” lies at a peak of 2,800m high, located to the east of Fansipan peak. After many years of observation, Mr. Lam said that Dragon Head Peak is no different from a “weather forecasting device” with 90% accuracy. If the top of the Dragon’s Head appears to be surrounded by a black haze, then it is said that the next day it will rain. If a thin, lethargic, white cloud wraps around the Dragon’s Head, it will rain 3-4 days later. 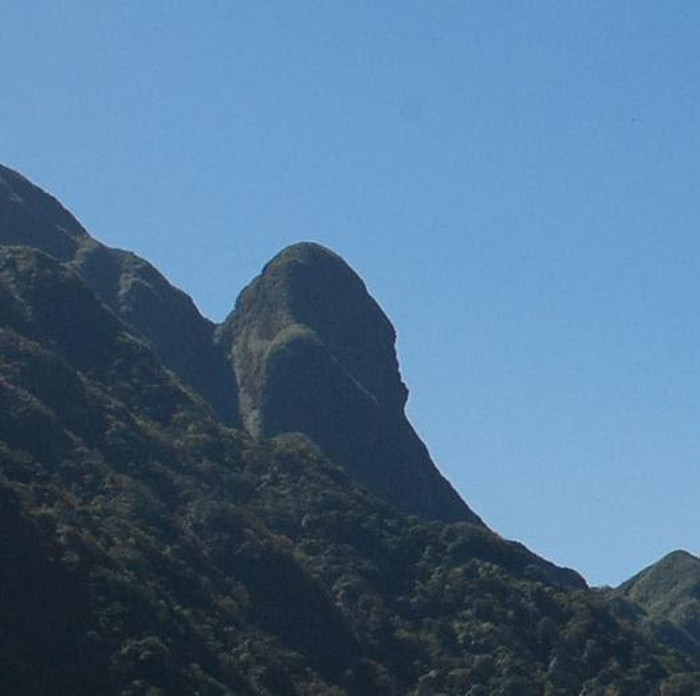 For many years now, thanks to monitoring the top of Dragon’s Head, Mr. Lam has repeatedly promptly informed the rangers about the prolonged hot and dry heat waves, so that they can strengthen forest management, prohibit the people from burning the fields for farming, or Tourists make campfires, forest fire prevention.

But since 2016, when the Fansipan cable car came into operation, the phenomenon of burning forests for farming or tourists setting off campfires indiscriminately has ceased to exist. The national park also breathed a sigh of relief because it was relieved of the burden that had been clinging to it for decades. Seeing the top of Dragon’s head and watching the weather with forest people Hoang Lien Son is now just a hobby or a hard habit to break.

The thousand-year-old tea forest on the top of Fansipan

Few people know that, at an altitude of 3000m near the station to the cable car on the top of Fansipan, there is an immense mountainside with ancient tea trees, bigger than the arms of a person. With the bowl-covered terrain located deep in the middle of the great thousand, separated from each other by streams, the tea forest is covered with clouds all year round, creating a magical scene like a Chinese movie. 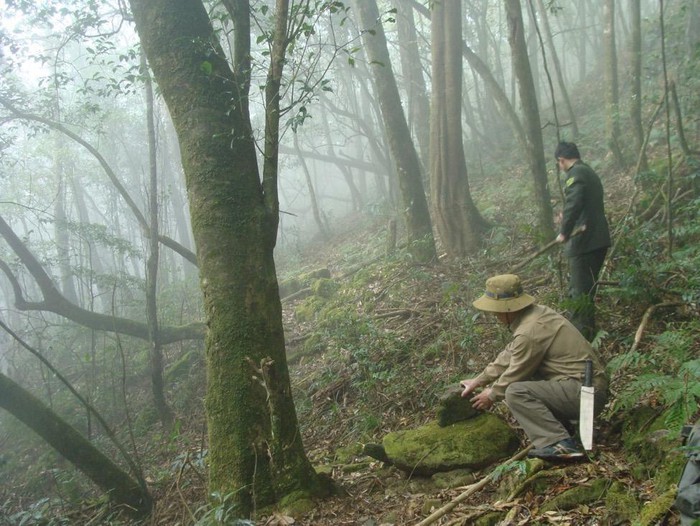 The thousand-year-old tea forest on Fansipan

Mr. Lam said that, according to calculations by Japanese scientists, in this harsh environment, at this altitude, tea trees the size of one person have been around for hundreds of years. The diameter is only 1mm bigger each year, and when it reaches a thousand years old, it almost stops growing. If so, perhaps the tea forest on the top of Fansipan must have been more than a thousand years old.

Mr. Trinh Van Ha, a former surveying engineer who participated in the construction of Fansipan cable car, still cannot forget the strange and sweet taste of Fansipan ancient tea: “The tea has a very strange taste and is especially delicious when sitting and enjoying it. wake up in that very forest,” said Ha.

According to Mr. Ha: There is one thing that until now he has not been able to explain: The deeper you go into the tea forest, the more mosquitoes, the squeezing and even the snakes, which are the “specialties” of the great thousand Hoang Lien Son… the less. 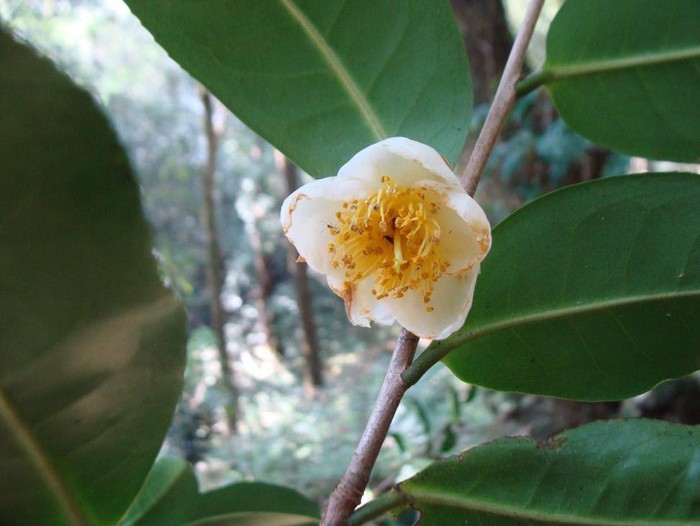 “The ancient tea forest is like a layer of pistil surrounded by many layers. The outermost is the arc mountain range, the inner circle is the precious wooden forest that the indigenous H’Mong people often use to make coffins. Finally, there are thousands of ancient teas. The deeper you go, the more there are no wild animals and insects. The forest brothers also choose this core area to rest because … it is very peaceful,” emphasized the former surveying engineer.

It is not easy to find the ancient tea forest by road, but visitors can still glimpse the green shadow of the tea trees from the 2nd pillar, on the right when taking the cable car to the top of Fansipan.

The mystery of the poisonous snake forest

Luc Thanh Chien used to have a “seniation” of 6 years with the cable car from the earliest days. Until now, Chien still shudders whenever he remembers the snake forest.

“It was in the years 2013-2016, we opened a route through the national forest. The brothers were walking and groping because there was no way, everywhere only saw dense trees, steep slopes. But the scariest thing is snakes – the weird specialty of Hoang Lien Son forest,” Chien recalls. 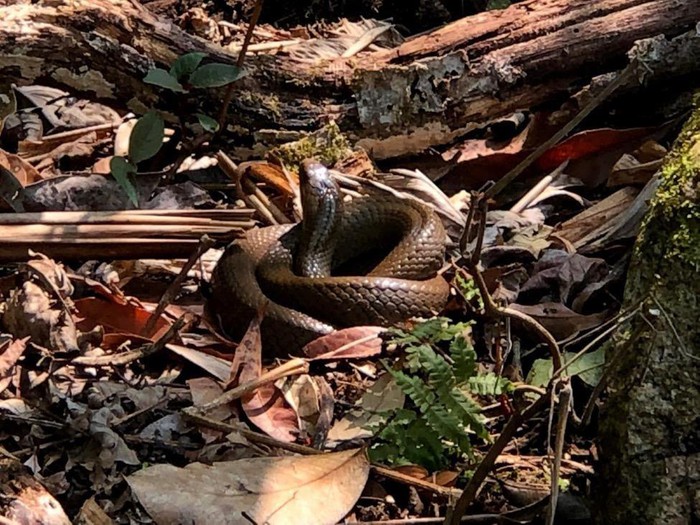 According to Chien, from the height of 2,100m onwards is the territory of all kinds of creatures, but around the area of ​​the 3rd pillar of the cable route, snakes are like the owner of this whole strip of forest. “They are extremely brave, aggressive and ready to attack as soon as they are disturbed,” – Chien said.

Giang – a former engineer in charge of public service cables, sweating, recalled: “It is not unusual for brothers to go survey or open a route to meet snakes. Once, while pulling the cable, I suddenly heard the podium sound like someone tapping on boots. Looking down, I saw a green snake-like a banana leaf pecking.

And Ma A Tong, a former security officer who participated in cable construction in the period 2015-2016, said: Once, when he was sleeping, his hands were cold and sad. “When I opened my eyes, I saw a big snake slithering over me. The brothers in the shack were so scared, they could only lie still and hold their breath,” he recalled. 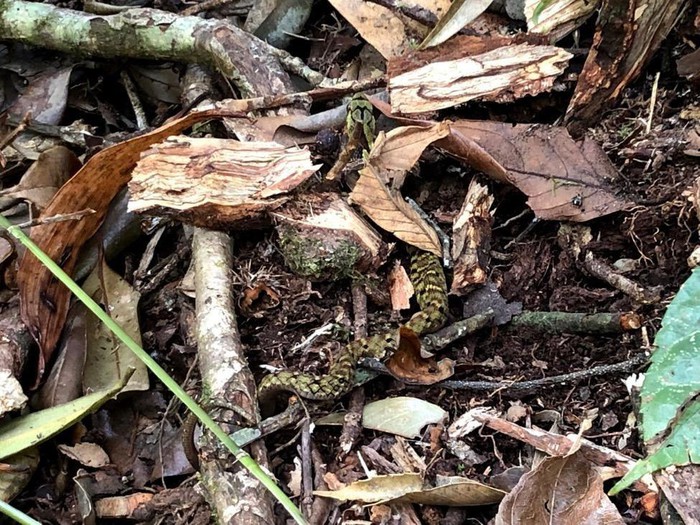 Snakes on Fansipan have many types

Snakes on Fansipan come in all shapes and colors. Species that hide under the layer of rotting leaves with brown speckled color are difficult to detect. The species hanging from the bamboo branches are green, only the tail is as red as a faint lipstick. The Mong people consider snakes as sacred animals, even worshiping snake gods, so they do not eat or catch snakes to sell, even though poisonous snakes are of high value. So snakes are free to multiply and are not afraid of people.

Until now, the “veterans” who built Fansipan cable car when they meet each other still talk about meeting snakes in the forest, and even send each other pictures of a tree trunk full of green snakes, as proof of their loyalty. mysterious, dark and sacred source of Fansipan aura.