Nearly 70 gray-shanked douc langurs in the Nui Thanh district are assessed as “the only population in the world that can be easily observed in the wild”. 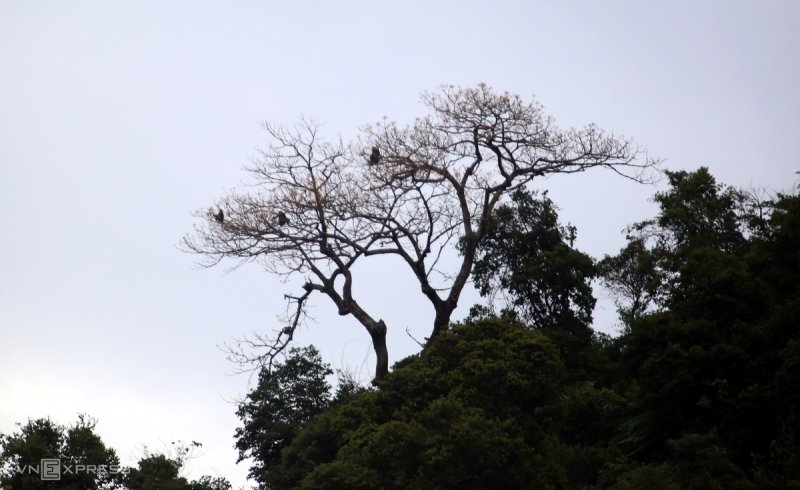 In these summer days, from early morning, gray-shanked douc langurs climb to the tops of natural trees in Tam My Tay commune, Nui Thanh district to eat young leaves.

Currently, the country has about 1,500 to 2,000 individuals on the critically endangered species list in the Red List of the International Union for Conservation of Nature (IUCN) and is one of the 25 most threatened primate species in the world. 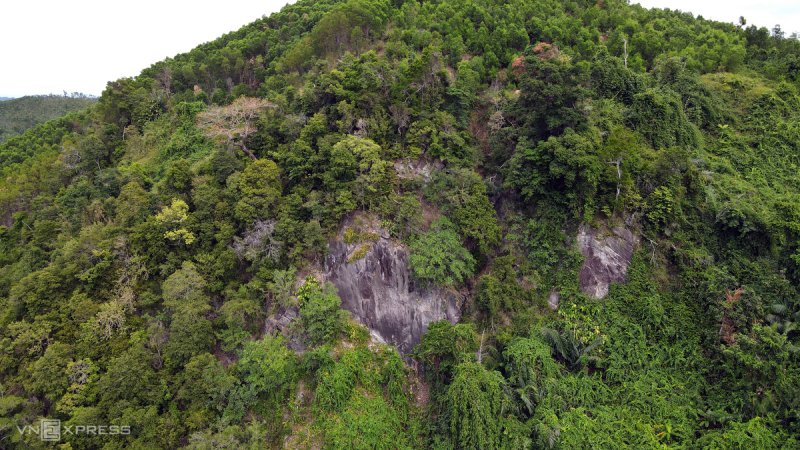 According to local people, in the past, natural forests were covered, but then, acacia trees brought high economic value, so many people cleared the forest to get land for planting. The remaining four areas are steep rocky mountains and slow-growing trees, so people do not cut them down. The natural forest is shrinking, so the langurs come here to live.

In the natural forest, the remnants are poor, with many shrubs, vines, and small trees. The food source is exhausted, but for decades, langurs have not moved to other places but stayed. In the past, there were hundreds of langurs, but they were hunted by other people, so the number gradually decreased. In 2017, the authorities took many protective measures. 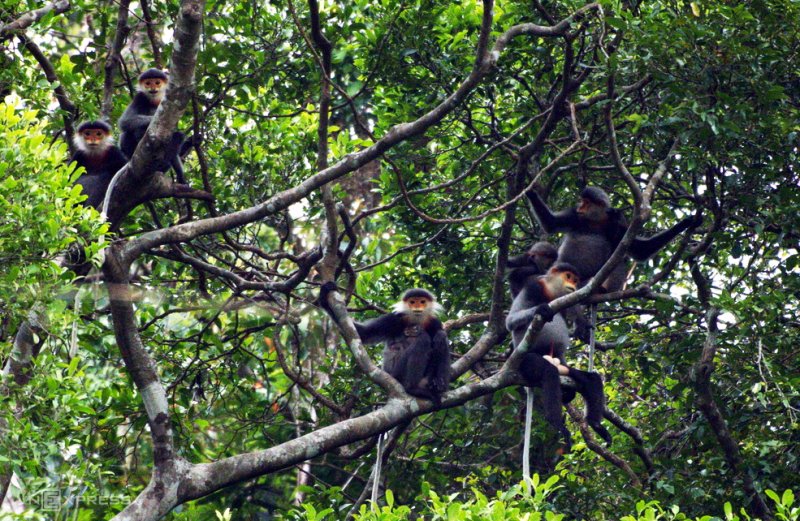 A family of langurs perched on a tree resting. Their main food is leaves and fruit, seeds, flowers, young shoots.

The survey results of GreenViet Center determined that there are about 68 children in 6 families. Compared to 2018, the herd increased to nearly 20, but it cannot be confirmed due to natural growth, because the possibility of langur families living in the nearby mountain cannot be excluded. However, the increase in langur numbers is a “positive sign”. 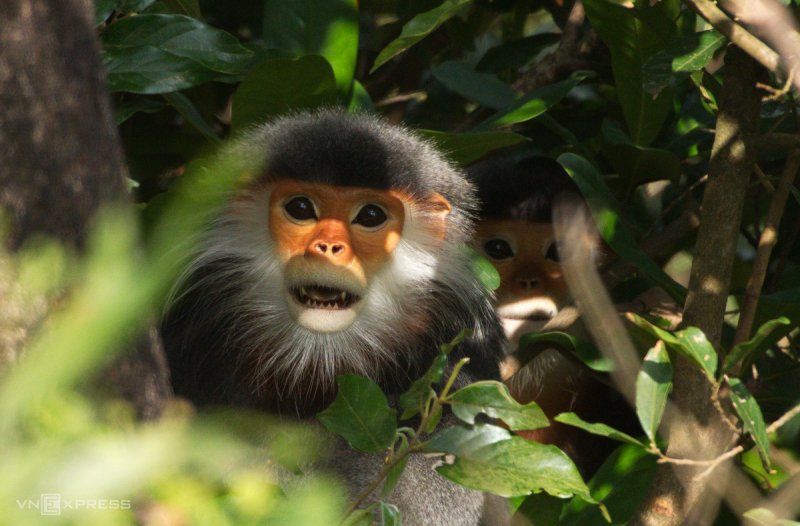 A gray-shanked douc langur lies under a forest canopy. This species lives entirely on trees in natural forests, they mainly live in the canopy and overstory, living mainly on trees with a height of 15 to 25 m, moving by jumping and branching. They do not feed in forests planted with acacia. 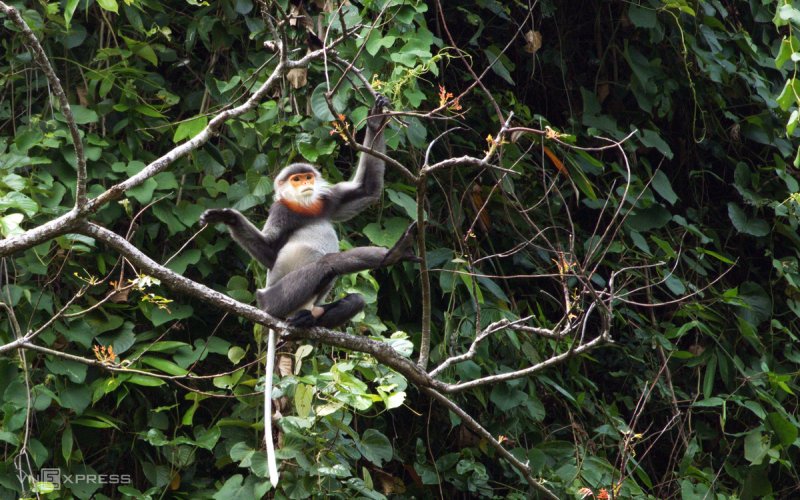 The langur is using its legs to bring the branch close to eat the young shoot. GreenViet Center assessed that this is the only population in the world that can be easily observed in the wild. “Quang Nam has great opportunities to preserve and serve sustainable development through ecotourism models and local cultural values,” the agency said. 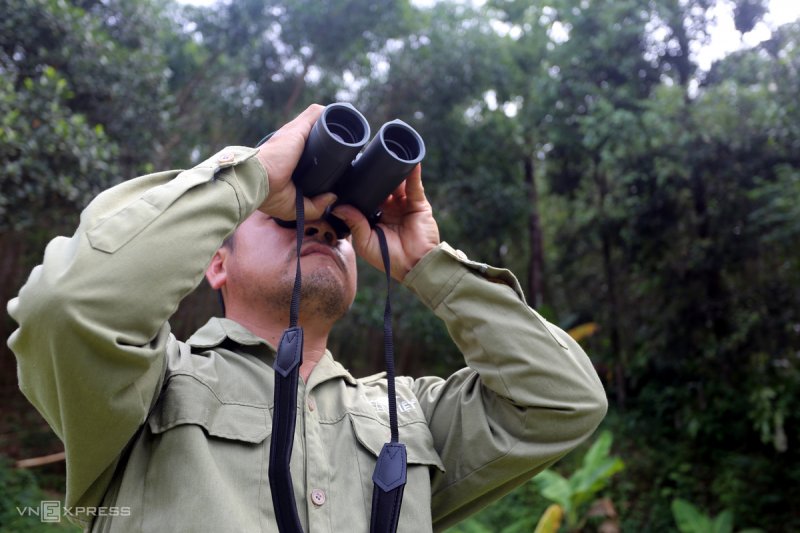 Mr. Nguyen Du, using binoculars to observe the langurs. He is the leader of the village forest protection group with 10 members. This group has volunteered to protect the langurs for many years. 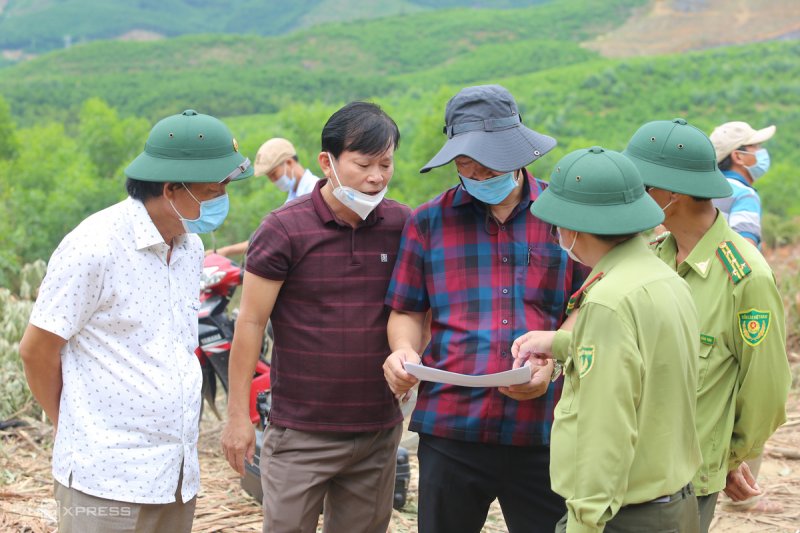 Mr. Ho Quang Buu, Vice President of Quang Nam Province (middle) and leaders of departments inspect the remaining forests to implement the conservation project of gray-shanked douc langur in Tam My Tay commune to 2030 and a vision 2050.

According to the scheme, Quang Nam invests more than 64 billion VND, of which the period 2021 to 2025 is 49.4 billion VND and from 2026 to 2030 nearly 15 billion VND. The State recovers and compensates about 30 hectares of land for growing acacia from people in the area to expand the habitat for langurs; The people’s 90 hectares of acacia plantations will become a buffer zone for co-management between the state and the community with the orientation of combining conservation with eco-tourism to improve people’s livelihoods. 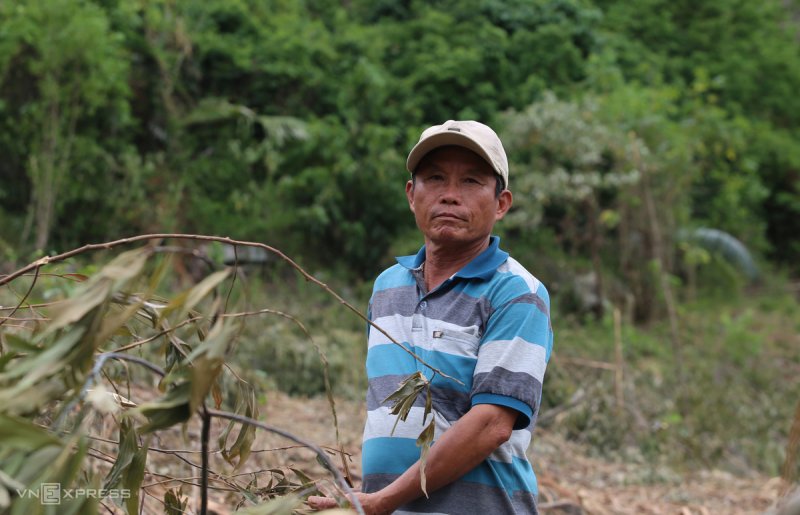 Mr. Vo Ngoc Danh (62 years old), in Tam My Tay commune growing acacia melaleuca under Hon Do mountain, said that every day, he witnessed a herd of langurs eating. “We have a desire to preserve this rare animal. People who plant acacia trees around the mountains where langurs live have discussed and agreed that if the state supports compensation, they will give up their land,” he said. In these forests many pig-tailed monkeys, golden monkeys… 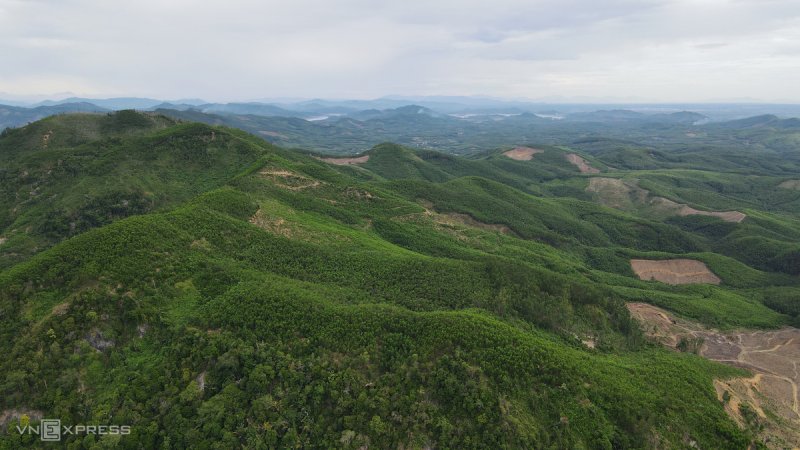 In Tam My Tay commune, 30 hectares of natural forest remaining in the four mountains of Hon Do, Hon Ong, Duong Bong and Duong Ban Lau. The natural forest between these mountains is separated from 1 to 3 km by acacia tree plantations, so it is isolated from other natural forest ecosystems with a distance of 7 to 10 km.