In U Minh Ha, Ca Mau, visitors can see how to make a home for bees and enjoy every cup of sweet, golden honey.

Through the pages of the writer Son Nam’s book about the South, I was determined to find the last place on the map of Vietnam to understand what is “The scent of Ca Mau forest” and taste the sweet sweetness of Melaleuca forest honey. . That’s the trip we took in 2020.

U Minh Ha is a large national park in Ca Mau province recognized by UNESCO as a biosphere reserve of the world with a unique wetland ecosystem, melaleuca forest on peatland, and a variety of precious flora and fauna. This place is also the home of natural wild bees specializing in sucking honey from the pistils of Melaleuca flowers, which bloom most brilliantly between March and April every year.

The entire forest with an area of ​​about 30,000 hectares is a huge source of Melaleuca flowers and other flowers for bees to collect pistil to make honey. Estimated honey production is about 1,000 tons/year, of which about 800 tons are harvested by people from going to the forest. 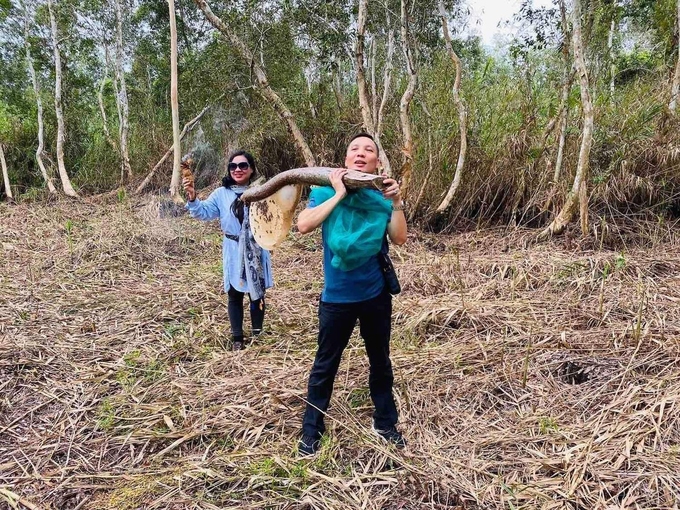 My friends and I were very excited to go through the forest to experience it right away, but the professional bee hunters advised us not to rush, slowly pouring out a cup of honey to invite us to taste it first. The brothers said: “Try to see how delicious it is, then go to the forest.” The honey in U Minh Ha forest is clear and yellow like orange juice, sweet, sweet, rich but not harsh, both the flavor and the gentle taste make people crave forever.

People in the West in general and Ca Mau in particular often call this profession a bee guard, or “eating bees”. Actually, keeping bees and eating bees are two stages of bee hunting. Under the canopy of the Melaleuca forest, bees are built by humans to live in the deep forest. Therefore, to get honey, bee-eaters have to go to the forest regularly. Depending on the person who has “hands”, honey is harvested after 30 days. And when the bet is not clever, sometimes it takes a few months to get a little. To harvest at the most “ripe” time, honey must be visited regularly. Just like that, the bee-eater was very familiar with every deep corner of the forest.

In U Minh Ha, people “eat bees” all year round, the whole rainy season starts from the end of May to around August of the lunar calendar and the dry season from about October to April of the lunar calendar. At any time, going to “eat bees” is also hard. Perhaps it is right to call the beekeepers as artisans because they have to be skillful, calm and brave, but also have to understand the behavior of the bees to be able to approach to get their honey. To perform the truss, the worker must first prepare the rafter set, including the rafter body, support post, and crutch. This truss set is made from the trunk of melaleuca, 10-15 cm in diameter, peeled and dried. According to the experience of Mr. Khanh, owner of Muoi Ngot tourist area, the best place to guard the rafter is where the melaleuca tree is low, surrounded by many flowers, in an empty area, with sunlight shining down on the rafter body.

The ideal time to hang up the truss is around mid-November of the lunar calendar. At that time, the late rains at the end of the season washed away the smell of iron where the two ends of the truss branches were cut by a knife just in time to dry. The bees hate the iron smell of the knife stuck on the tree, so they are afraid to come to the nest.

Listening to the brothers explain how to make a truss and take care of it little by little when building a house for bees, the whole group must recognize that this profession is both elaborate and meticulous. To do the job, almost everyone devotes their youth to it. Hard work is like that, the eyes and smile of Mr. Khanh, 21 years of work, suddenly brightened strangely. He excitedly shared with us many things like a real guide of the jungle. 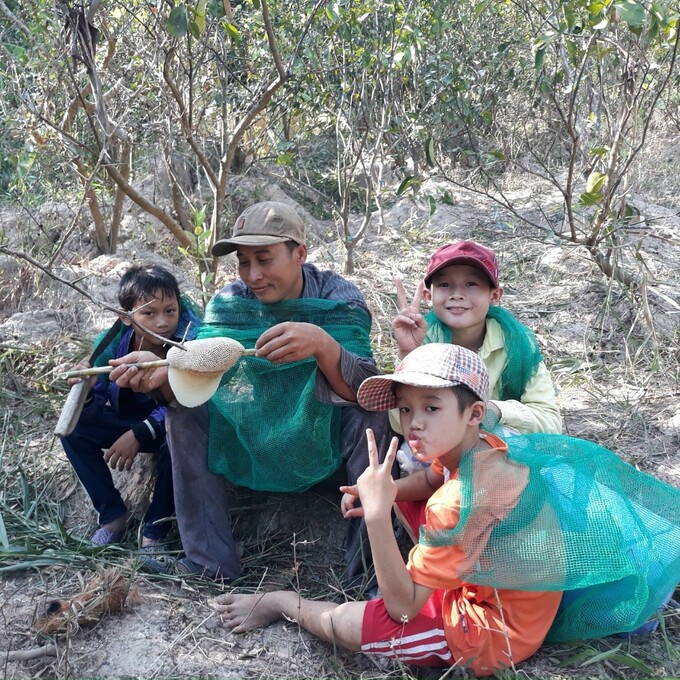 The day we went to the forest was around mid-April of the lunar calendar, the melaleuca forest was in bloom with white, fragrant flowers like a young girl’s rattan hair. We split into two groups: a new bee guard group, and a group that went to eat bees. Honey harvested from the end of the sunny season will taste the best. In contrast, in the rainy season, honey will be pale, not as delicious.

We were stunned by the huge U Minh Ha beehives, some of which were a meter long. They become sparkling when meeting the sunlight from above. Each average hive has from 3 to 5 liters of honey, large hive has tens of liters.

Our bee-eating group has prepared the necessary tools: a bow torch made of dried coir that is tightly bound for smoking, a bowl or bucket of beeswax (also known as beeswax), a knife and the net that covers the whole body to avoid being stung by bees.

Early that morning, both nervous and excited, we waded through the forest and then rowed a canoe to remove the beehives. It’s dry season, so there is little wind, and there is early dew, so when we smoke, it is difficult to catch fire, less risk of a forest fire. We approached the giant beehive, blew smoke from above the wind to let the bees fly away, cut the honey with a knife, separated the honey from the big hive, and then cut the black part of the hive, leaving only a normal part. about 1/3 of the hive for bees to make new nests. I panicked because I clumsily made a noise that sent dozens of bees flying out. Even if you get stung, you can’t kill any bees, we were well advised because for the U Minh Ha people, bees are friends and we are sharing the gift of mother nature.

When the “bee-eaters” touch the hive, we fear they will be stung. Their hands gently “stroking” the nest, according to the motto “harvesting but not destroying, making full use of”. They consider themselves to be forest guards for the same reason. 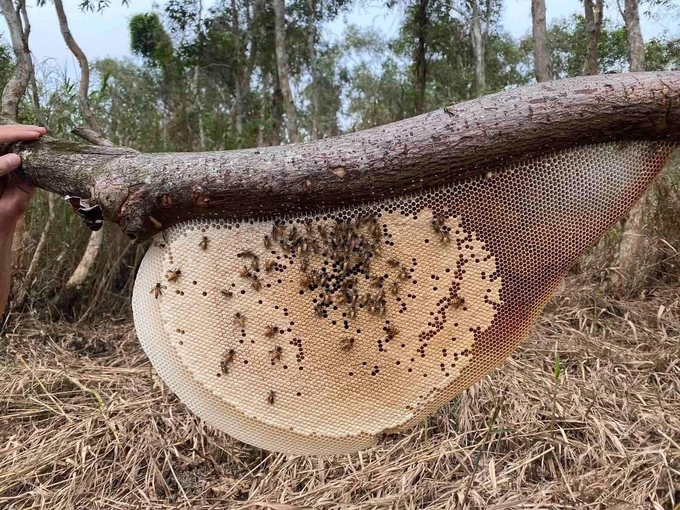 With his rich experience, the “bee-eater” smoked smoke so that the bees guarding the nest would get drunk and ignore our presence. After that, the bee truss has a huge part of the nest that is carried home as a trophy. Sitting on the boat, turning back to the wharf, everyone immediately enjoyed a piece of fresh honey and unbelievably delicious honeycomb, a reward for an emotional morning in the forest.

Soft young bees that release milk mixed with honey is a specialty cherished by the U Minh people as well as wholeheartedly preserving the unique “bee-eating” profession associated with the reclaimed history of the South. It is not uncommon for this profession to be recognized by the Ministry of Culture, Sports and Tourism as a national intangible cultural heritage. If you follow the bee-eaters deep into the U Minh Ha forest, you will understand how precious the profession of “bee-eating” is to be preserved like that.

The beehives with beehives were brought back, ending the exciting “bee-eating” day. Follow