Artisans from Van Son pottery craft village and Nhan Thap wood carving village always have products to offer by using techniques passed on from their ancestors.

While many traditional pottery making villages in Vietnam have to struggle for survival, Van Son Village is brisk with pottery products being found everywhere in its place, in the yards and in the warehouses.

The local potters are always busy. From their hands, pottery of all shapes and sizes comes out, from small pots to big jugs. One of the most attractive products is bong gieng, the local name for casings of underground water wells. This giant piece of pottery is favored by people in many places due to its high quality.

Aside from their traditional earthenware and ceramics, local potters have kept their trade to maintain the traditional craft which has survived the test of time. Some of Van Son Village’s products are even able to compete with mass-produced counterparts.

Among the village’s new pottery items are baked clay stoves. In truth, the old version of the stove is redesigned to be able to cook two or three dishes at a time now.

Nhan Thap Village is a place for carving workshops, big and small alike. Nearly 1,000 artisans and workers earn their livelihood in the village. A small workshop is run by an artisan who is also the owner. Under him are some other workers who are often his family members—his wife and his children. Meanwhile, bigger ones hire several key artisans and dozens of workers. Wooden works from these workshops—such as flower vases and items on the altar with hand-carved patterns—are the village’s best sellers. 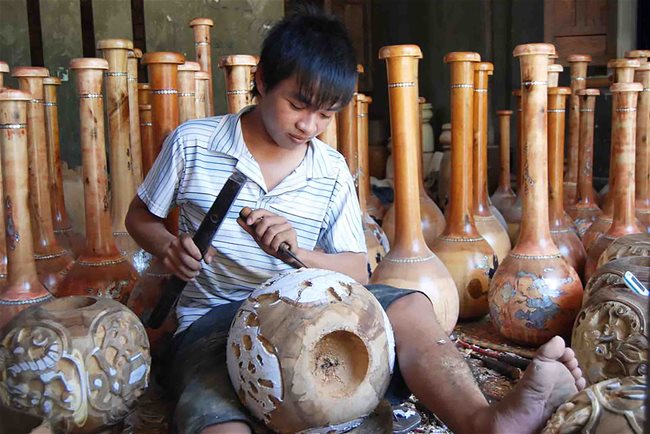 Over the past decade, the market of Nhan Thap’s hand-carved wood products has been expanded. Artisans in Nhan Thap believe that their predecessors’ craftsmanship is passed on to help them maintain and develop the traditional trade.

Since 1990, several workshops have been expanded considerably to become large entities to produce more new products. The village now has 80 workshops where 800 artisans are working.