Vu Hai and his group of friends recounted their “never-before-seen” experiences when making a 3-day trip to Tien cave (Quang Binh).

After looking through transportation options, Hai’s group of six decided to take an overnight sleeper bus from Hanoi to Quang Binh. This is the most convenient and reasonable option because you only need to sleep in one sitting, you don’t have to spend time going to the airport and waiting in line. The price is 260,000 per person.

The distance from Hanoi to Quang Binh is about 550 km. As expected, the group will depart from Hanoi at 19:00 to Phong Nha at 4:30 am, then rent a car to the office of the Oxalis travel agency. The group spent the night there until 7 am when a car took them to the gathering point to hear information about 3 days of going to the forest. All rooms are free and clean, so everyone can feel secure.

Because he thought he was a person who often practiced sports, going to the jungle should be no problem, but Hai was wrong. Right from the early morning, the group had to trek 8 km of mountain road in the middle of 30 degrees sun, hunger made everyone tired. Around 11:30, the group reached first place. It was a cave called “Secret” because people discovered it by chance while cutting wood in the forest. This cave has a rather small door, but it is wide inside and there are many beautiful sparkling stalactites inside. This is one of two spots with divine adventure photography that you can’t miss. 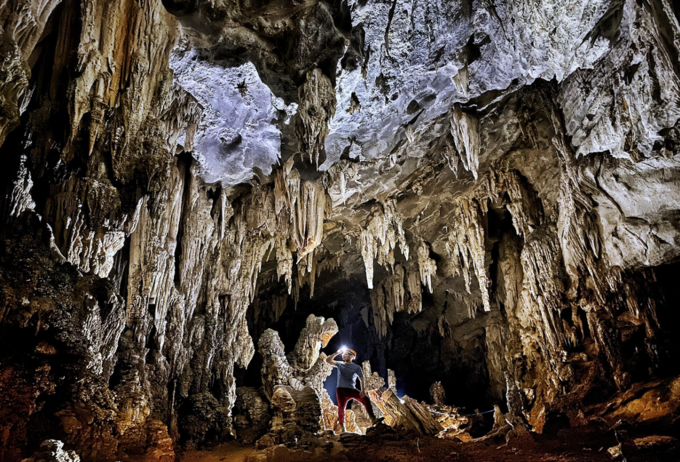 Hai’s group was impressed with the stalactites that have been formed for a long time inside Secret Cave.

All lunches are brought in by the tour guides and of course, must be cleaned, otherwise, the company will be fined. Thanks to participating in this tour, Hai learned that Oxalis Company fines very heavily if guests or tour guides affect the environment. Therefore, Hai said that he really appreciates how to do tourism here. They are the people who change the minds of Vietnamese people when traveling. Hai agrees with selling the tour at a high price because all tourist items will be brought in and out thanks to a very responsive service team.

After 4 hours of climbing, the group rested at the camp next to the stream. Here, the water is very clear, there are much fish. After a steep climb and a 13km walk, the group was exhausted and quickly plunged into the water for a refreshing dip. Hai said, this is the longest trekking day but the easiest to breathe.

In the evening, the brothers in the guide group help guests cook in the cave. The whole group, everyone was impressed by their enthusiasm and surprised at their enduring health. The food is delicious and full of dishes like a “mobile restaurant”. After that, each person had a tent lying in the middle of the starry sky, “this experience can’t be found anywhere else”, Hai emphasized. The scenery is both peaceful and majestic, and Hai wonders why he didn’t do this sooner.

Day by day, the difficulty is increasing. The group did not go on the smooth road like the first day but had to climb the cliffs, cross the sharp rocks, wade into the stream, and stay wet like that. Hai said, he has never been on a trip but “tortured” so much. Soil and sand stick to the body, hands wear gloves or else bleed because sharp stones cut into the skin. Not to mention forest mosquitoes that bite through clothes, and there are poisonous snakes according to the warnings of porters and tour guides, and even trees that just need to be touched to itch all week. Although everyone was tired, there was not a single complaint, but on the contrary, the trip was extremely interesting. 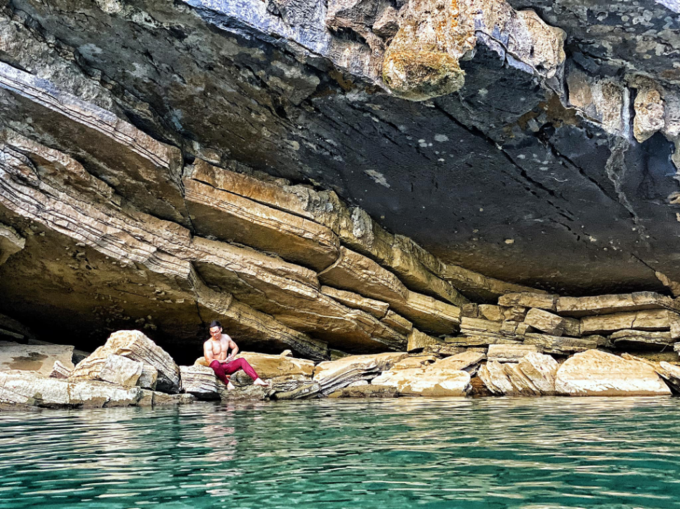 The group stopped to rest by the stream to get energy for the next journey.

On this day, the members like to swim in a very big and deep cave. It passed a mountain. Because the water is deep, everyone has to wear life jackets and hats with lights. It feels like going into a cave to kill a dragon in Lord of the Rings. At a point, he instructed everyone to turn off the lights. The group sinks into the dark darkness without any light and slowly drifts along the water. It seems that the whole surrounding has disappeared, only you. Relax your body and let yourself fall into the cool water. At that time, the mind was empty, all worries disappeared.

In the afternoon, the group camped in the most beautiful place of the trip. Six tents were set up along the stream as in fairy tales. Lush green trees on both sides of the forest, majestic mountains surrounding it look like a miniature valley. The group slept while listening to the sound of water flowing from the source. No phone signal, no Internet, no bad words or hate on social media. Everything is completely separate from the outside world.

In the morning, starting at 7 am, the group climbed the mountain, jumping over large rocks like squirrels. I don’t understand why it’s so stuffy up there. Maybe in the forest, there is no wind, the humidity is low, so the members of the group can hardly breathe because they climb too high but also carry things on their backs. Going back and forth, each member drank almost two liters of water, but he kept getting tired, at times he almost gave up but was encouraged by the guide and porter.

There are a total of 4 girls in the group, including one who is in her fifties but is very enthusiastic about moving forward, so there is nothing for a young man like me to give up, Hai thought. Just like that, overcoming all obstacles in the terrain and sometimes almost exhausted, but the destination is like the light at the end of a dark cave that makes all the hardships worth it. 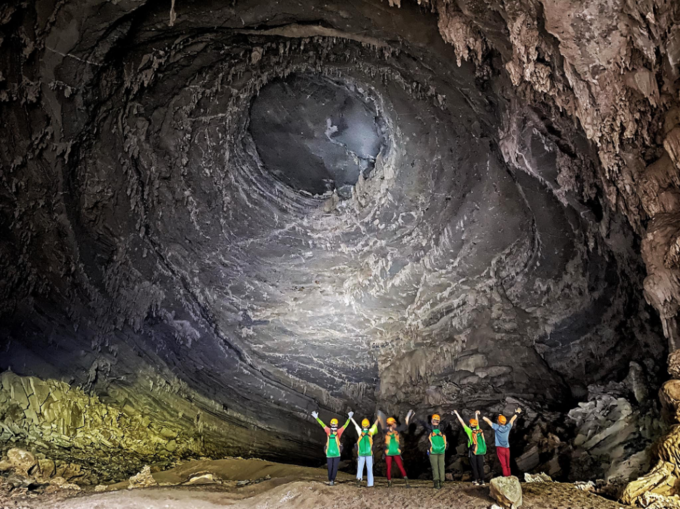 Hang Tien is the largest dry cave in the Tu Lan cave system, Quang Binh was first discovered in 1994. The total length is 2.5km. The whole group happily took souvenir photos inside cave 1.

Finally, Hai’s group reached Tien cave 1 and 2. This is the second-largest dry cave after Son Doong. The whole group froze. Hai still remembers the scene at that time: People were so small that when they entered the cave, they could only see its ceiling when they tilted their neck. The cave is twice as big as in the photo. Never had he seen such a big cave. In the hearts of the whole group, everyone was eager to think: Having come here, next year we must conquer Son Doong cave together.

Cave 1 is about 3 km from Cave 2. The slope is gentle, full of sharp rocks. According to the guide, in the past, Hang Tien was a single cave with a large cave entrance, but then it collapsed and formed 2 caves like now.

The whole group must stick to the instructions and go together. Unlike the small caves in the discovery journey on the first day, caves 1 and 2 really attracted Hai’s group. All members of the group must seem to be amazed by the primitive but magical beauty created by the creation of the dry cave system in Quang Binh province.

On the way from cave 2 to the pick-up point, about 7 km away, it rained heavily. The group kept going. Both tired and hot, meeting the cooling rain makes everyone’s spirit happier and more excited. There is no regret about the last day. The group of Hai crossed the forest and went to the main road where the Oxalis car was waiting.

The trip ended, leaving in Hai and his friend’s many strong impressions from fear of missing the car, fatigue from traveling too much, shock from dehydration at the last leg to moments of relaxation, immersing in nature. nature and seclusion from outside life. It all makes for a great experience. 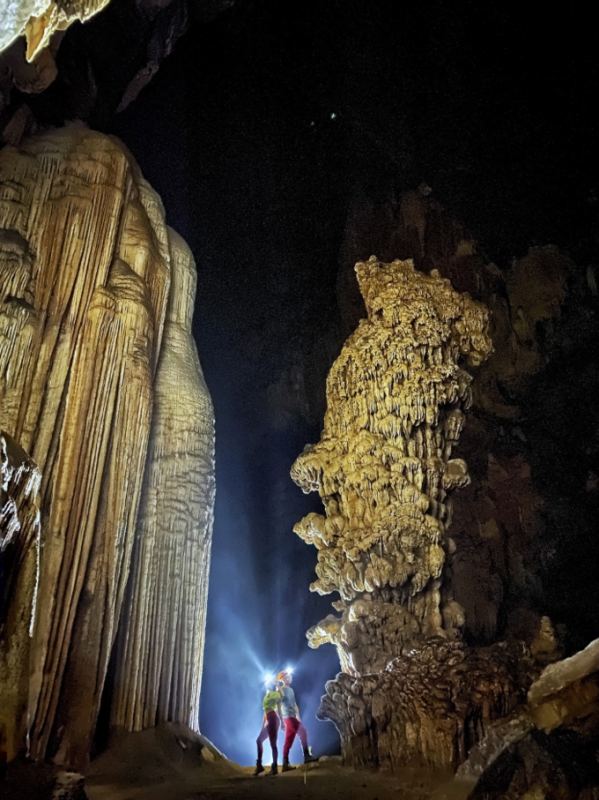 Beautiful scene in the 2nd cave.

Some notes for tourists, there are 3 car companies that people often go to, which are Camel Travel, Hung Thanh and Queen Cafe. Hai group chose to move to Quang Binh by Camel Travel car. The car is new, clean, the car is on time and most importantly, safe. When you return, you can choose Hung Thanh or Queen Cafe car. Pay attention to the bus on time because the bus does not wait if the customer is late.

This is a type of discovery tour, the best way, visitors should register for a package tour for dedicated support. The tour price is 6.8 million per person. Every day to explore the cave, you have to wake up early, trekking time from 7 am and finish around 17:30. You can bring your own food, spare batteries and full camera batteries for 3 days of exploring. Good sole sports shoes for climbing tours, warm clothes, toothpaste, sunscreen, and anti-mosquitoes… are essential items for the trip. Follow vnexpres/ Photo: Vu Hai