Through the lens of passionate photography teacher Le Tuan Anh, viewers can see a peaceful and rustic painting of the Hau Giang countryside. 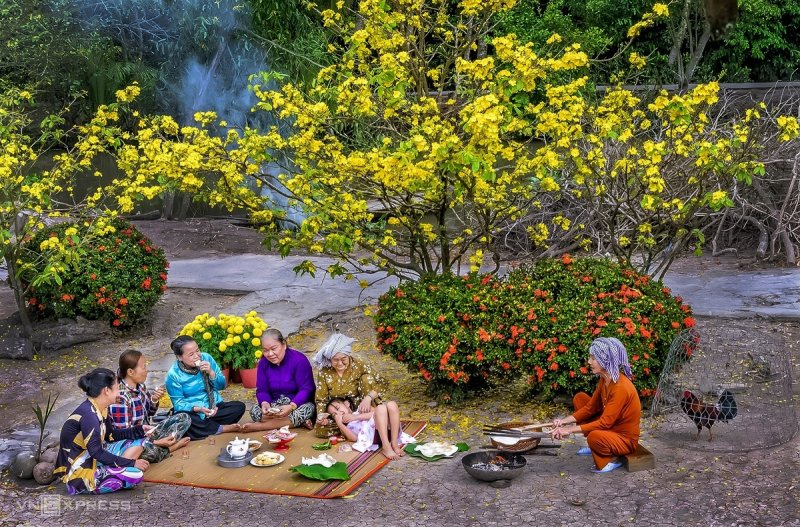 Le Tuan Anh (1996), a native of Hau Giang, is currently a teacher in Can Tho. The set of photos below is a memorable memory of Tuan Anh in his wanderings to create photos of the scenery and human rhythms in the Hau Giang countryside.

During his visit to Hoa Luu commune, Vi Thanh city, Tuan Anh recorded the warm gathering atmosphere of a family while eating baked goods on the porch during the Lunar New Year. The photo “Spring warmth”, won the consolation prize at the Hau Giang province photo contest 2019 and was selected for exhibition at the Vietnam Heritage photo contest 2019. 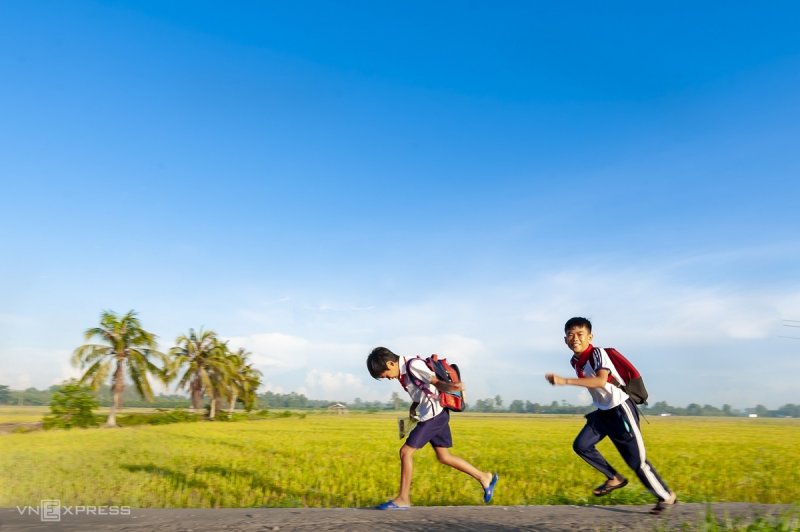 Scenes of children going to school through a golden rice field at Hoa Luu.

“Simple moments, everyday life is a topic I’m passionate about, also a part of my childhood memories and want to share this idyllic scene with everyone,” the author shared. 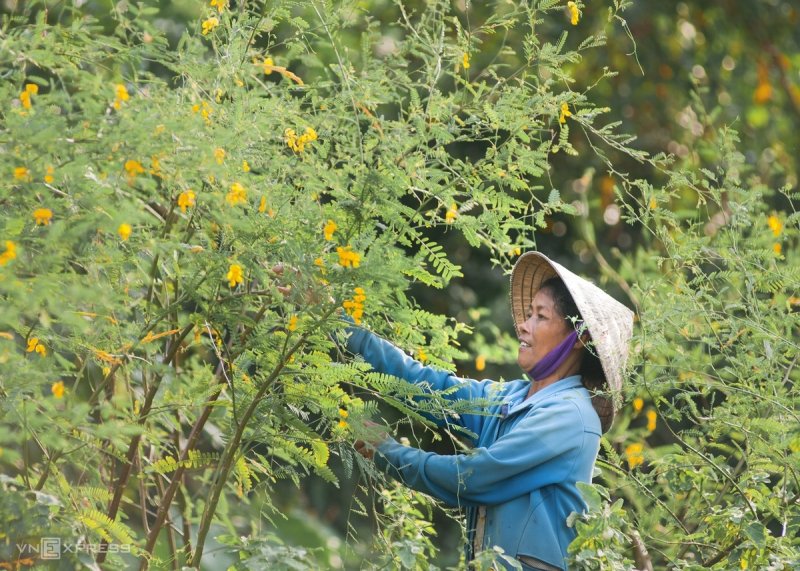 A woman picking wild flowers in the flood season. In the flood season, from September to October, dandelion trees grow on the banks of rivers and canals laden with yellow flowers, adorning the countryside beautifully. Dandelion cotton is used as a pickle, dipped with braised meat or dipped in Linh fish hotpot, delicious with rice and has an unforgettable flavor. 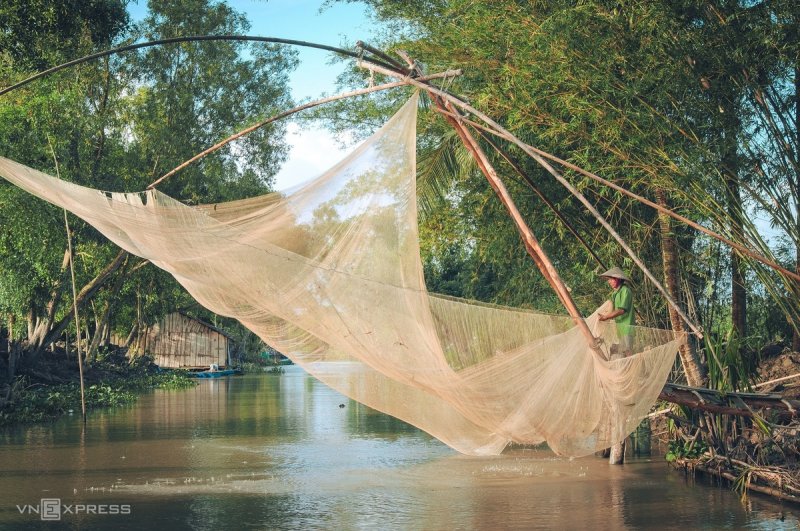 Save the hooves of the floating season at Hoa Luu. Floods bring silt, fish and shrimp products is also the time when people put their hooves away. This is a wide net that is tightened on old bamboo slats that cross each other, so that when the water flows, the net expands to form a wide space for fish, shrimp and crabs to enter. Such a rig can be used for several seasons of water and is easy for people to invest.

“In the cool afternoons, when family and friends can sit together and have a few glasses of wine and enjoy delicious dishes from fish, silver shrimp after being stored, there is nothing more interesting than that”, Tuan Anh said. share. 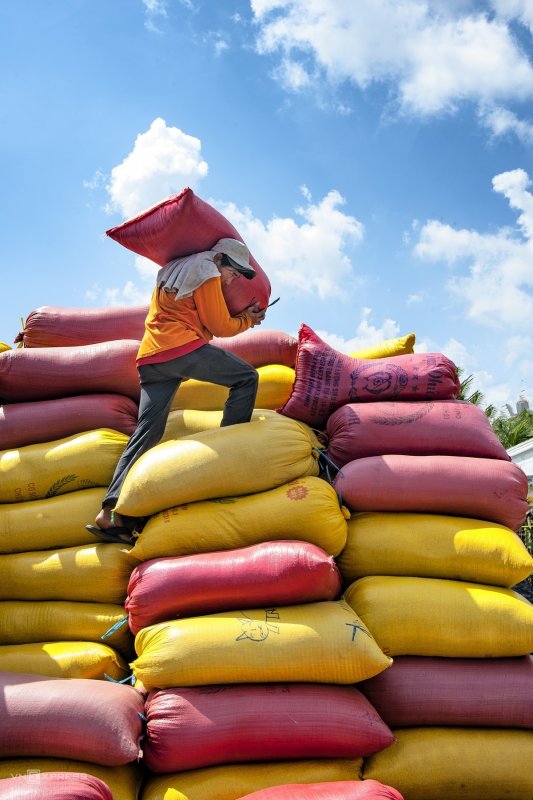 Bags of rice are filled after the winter-spring harvest in Hoa Luu commune. 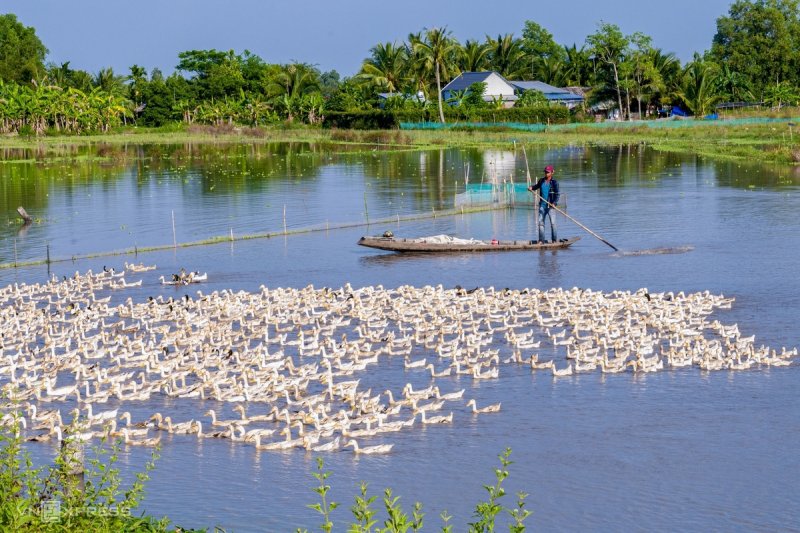 The scene of ducks running in the field, taken in Tan Tien commune, Vi Thanh city. Duck farming in the fields and for eggs is popular in many rural areas, helping households save significantly on food costs, thereby increasing profits. 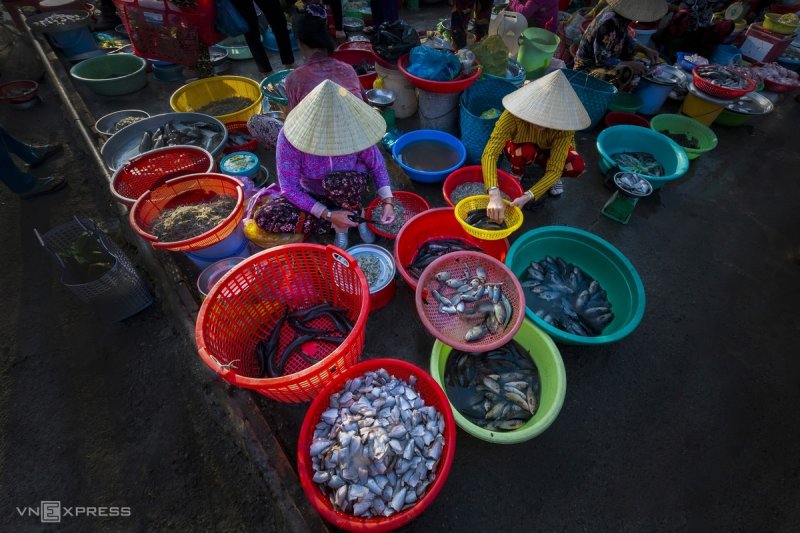 Fish products such as snakehead, perch and goby are sold at Vi Thanh market, ward 3, Vi Thanh city. Locals call this a “crouching” market, a farmer’s market or a “dong” market, with its own distinctive features of Vi Thanh, Hau Giang. The market operates from dawn, is most crowded at 6-7am, sellers sit close to the ground, are given a small chair or sit “crouching” on the ground. 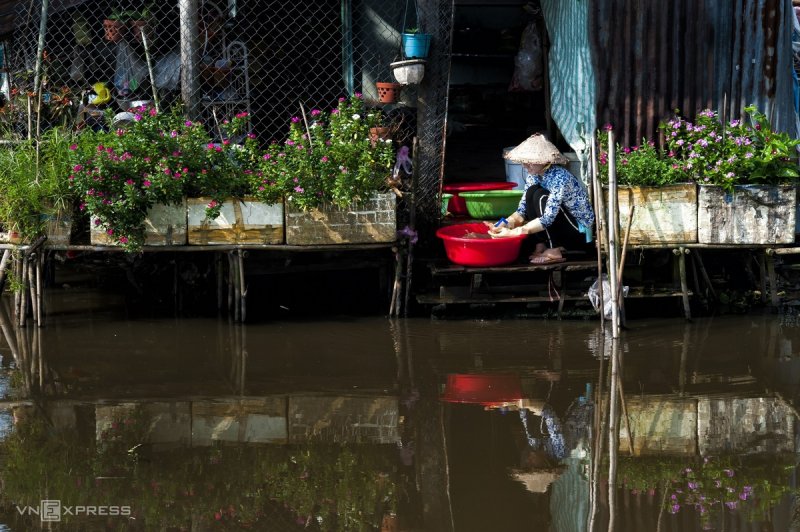 The scene of fish-making and vegetable-washing activities right behind the houses adjacent to the river is very typical in the countryside. The photo was taken by Tuan Anh at the river flowing through the territory of Ward 4, Vi Thanh City. 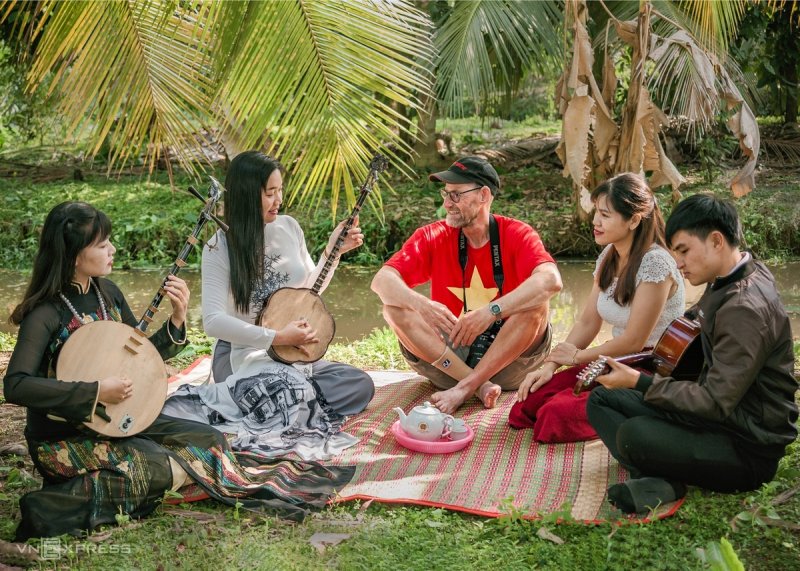 In addition to experiencing the beautiful scenery, discovering the rhythm of life on the canals and enjoying the delicacies in the countryside, visitors cannot miss the opportunity to exchange and participate in folk music activities. Local people gather in simple groups to sing to their heart’s content, satisfy their passion, and important to exchange and share in order to preserve and promote the nation’s traditional culture. 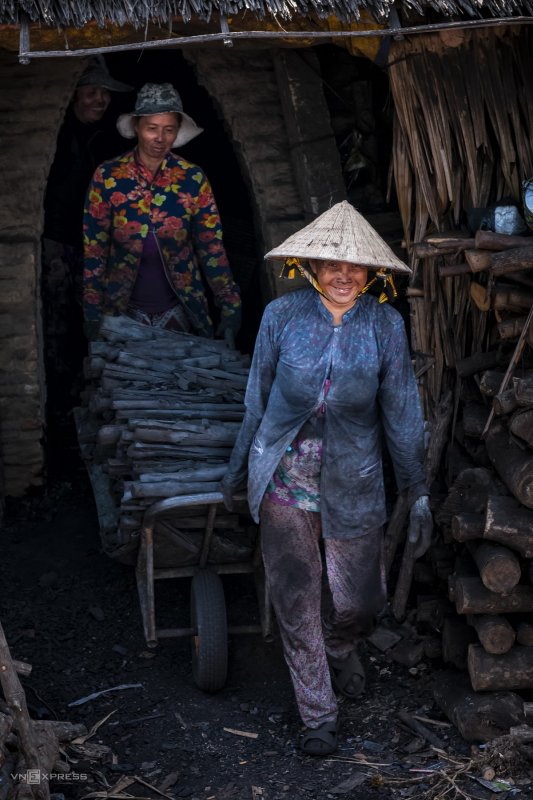 Tuan Anh also likes to take pictures of craft villages, depicting the true life of people, such as coal tunneling in Tan Thanh commune, Nga Bay city. This traditional profession existed 30-40 years ago, left by previous generations. The work goes through many stages to produce a batch of coal such as buying firewood, bringing firewood to the furnace, preparing the furnace and exporting coal. Hard work, dirty clothes, but in return people have a stable income. 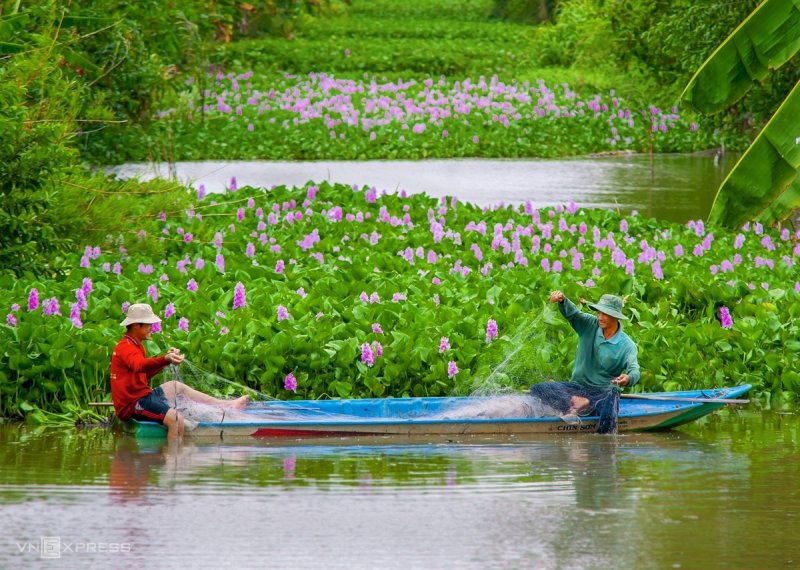 “The scent of the domestic wind with the season of purple hyacinth flowers brings a very peaceful feeling,” Tuan Anh shared when shooting a scene of netting on the river in Vi Trung commune, Vi Thuy district. 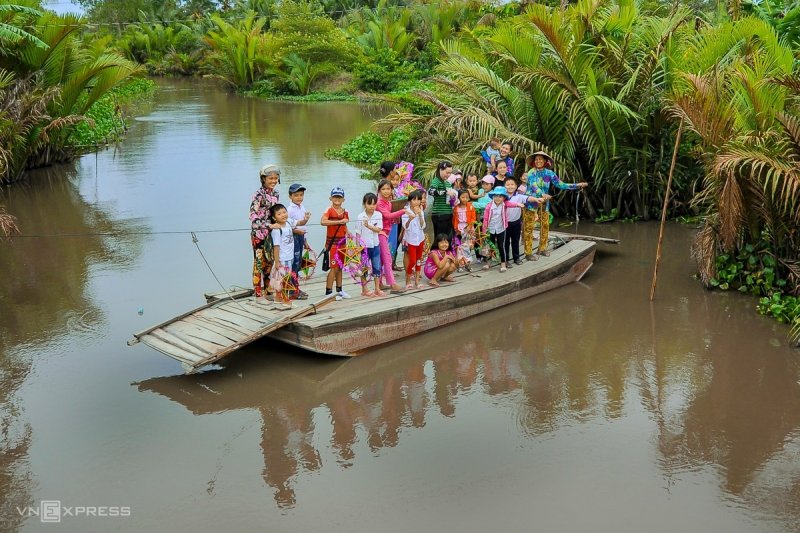 One of the impressive images that Tuan Anh has taken is the scene where she drove a boat to carry children across the river to enjoy the Mid-Autumn Festival lanterns in 2019, in Vinh Vien commune, Long My district.

“The hometown of Hau Giang is a series of photos associated with memories, also a documentary photo for me to have the opportunity to introduce more to my students about the life of the people in the countryside, warm, hard working, rich in gratitude. After hours of class, there was a time when the camera body continued to wander about, but now Covid-19 is complicated, so I temporarily stopped going here and there. Staying at home composing photos and reviewing photos taken in the past time also helps me to remember my passion, “said Tuan Anh. Follow vnexpress