Home / Travel
The half-century synagogue has the same architecture as the communal house in the Central Highlands
ChandraGarran04 29-06-2021, 08:50

LAM DONG – B’Dr church was established in 1962, is the spiritual activity point of K’ho parishioners in Loc An hamlet, Bao Lam district. 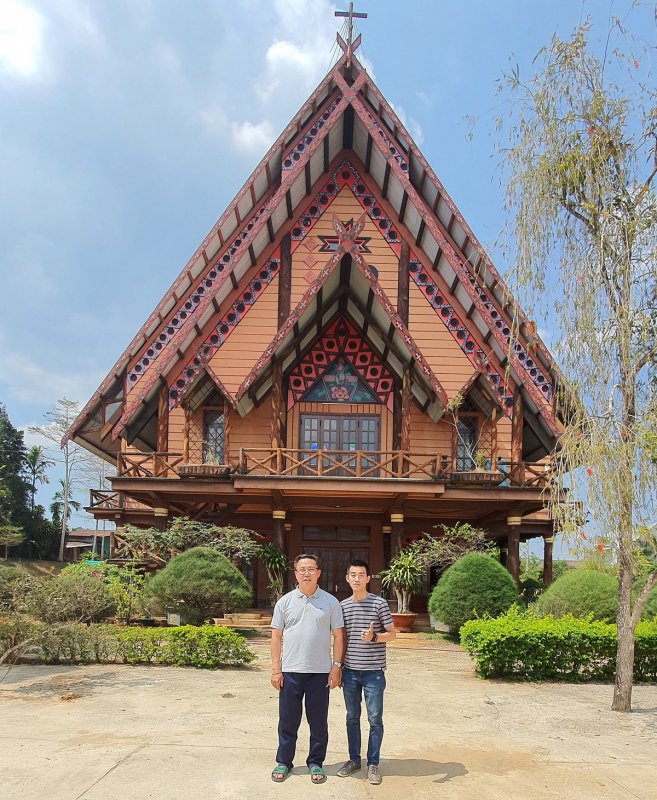 At the end of March 2021, Duong Vu Tan (right), born in 1992, had the opportunity to go on pilgrimage to 6 different churches when he came to Lam Dong province. He went to B’dr parish in Bao Lam district and was impressed with the architecture of the building here. Father John Baotixita Tran Duc Long (on the left), parish priest of B’dr church led him to visit and introduce some features of the church in the middle of the Central Highlands. 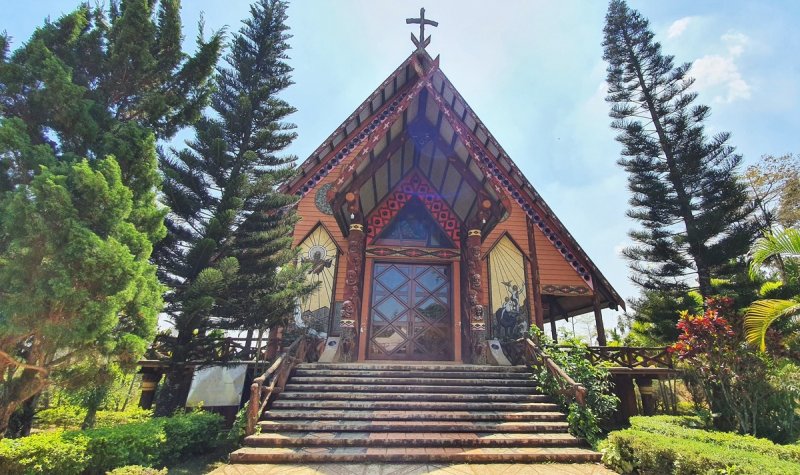 B’dr Church is located in Loc An hamlet, Bao Lam district, Lam Dong province, about 4 km from the junction of Loc An old market on Highway 20. The church was founded in 1962, originally just a small chapel used as a place to hold weekly Mass for the K’ho people, named after B’dr village. In 2003, the chapel was newly built with reinforced concrete like the present church, designed according to the model of a stylized communal house.

From the outside, the church stands out with the main yellow-brown paint, the 14-meter-high A-shaped roof is the highlight of the project, reminiscent of the house of the K’ho people in the Central Highlands. The main facade of the church has an additional layer of similar but lower roof, outside the main door are two pillars covered with imitation wood paint, carved with the image of 12 apostles in the Bible. 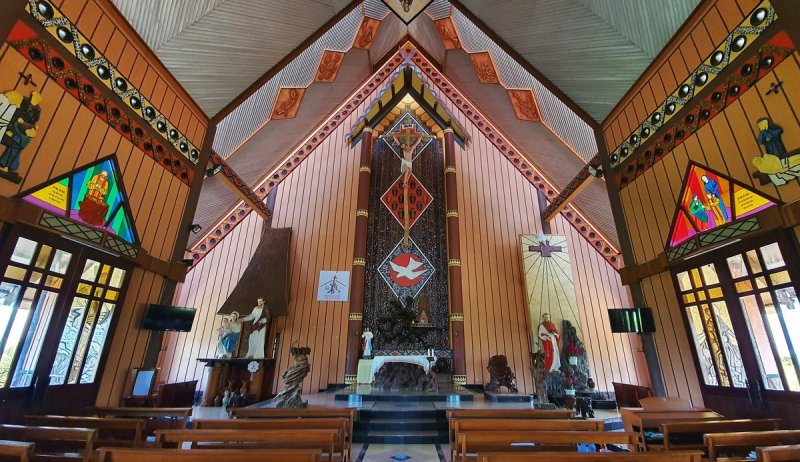 Inside the church is divided into 5 main spaces: the sanctuary, the secondary space on the wings, the heart of the church, the choir area, the auxiliary space behind. The sanctuary stands out with the statue of the Cross of Jesus, the back is the tiled part, the meticulous details such as jars, brocade … bring the feeling that God is close to the life of the local residents. 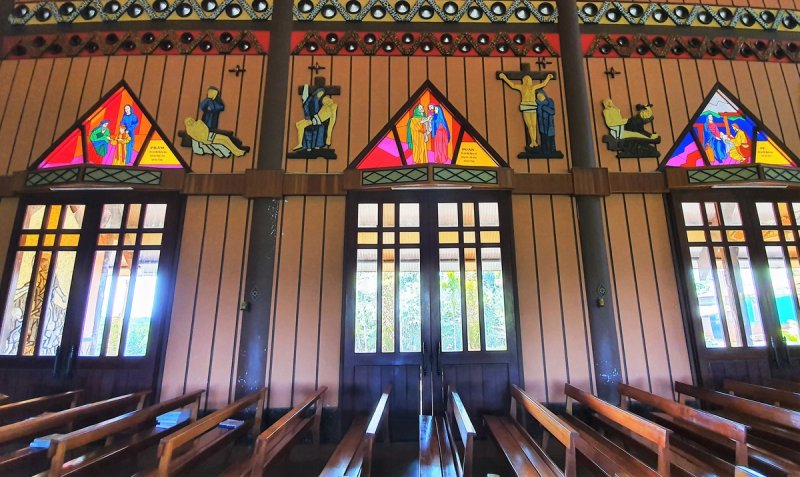 The doors to the church are made of clear glass, above are stained glass paintings, outside light shines in, highlighting the stories in the Catholic Bible. 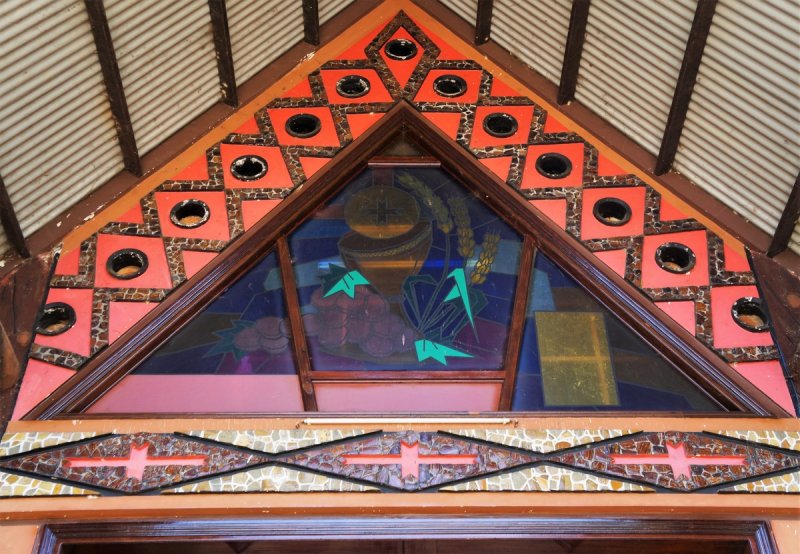 A special feature of B’dr church is that the roof-to-ceilinged walls are designed with circular, circular, ceramic and open-sided ventilation boxes, inspired by bracelets or eating cups and jars. jar. They are placed in a zigzag pattern, rippling like the brocade details on the K’ho people’s costumes. 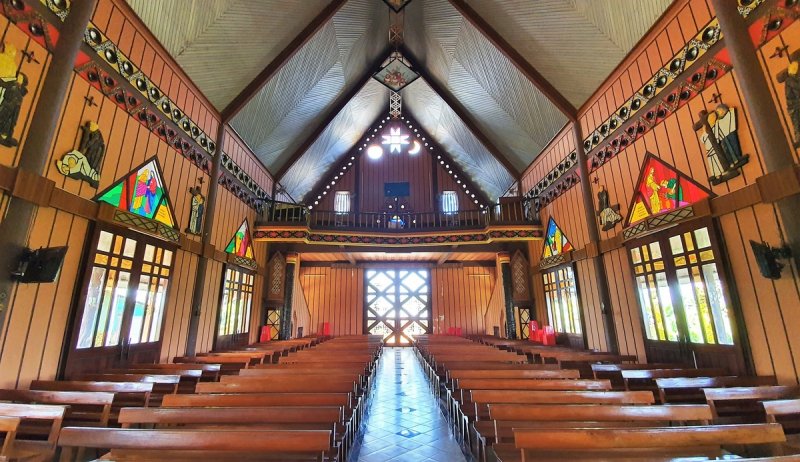 Currently, the church has more than 2,200 parishioners, most of whom are K’ho ethnic people. At the end of the church is the choir area, with stairs leading up. The light boxes in this area have the shape of a star, symbolizing the Trinity with the sun and moon, symmetrically on both sides of the jar, indicating the intimate connection between God and man. 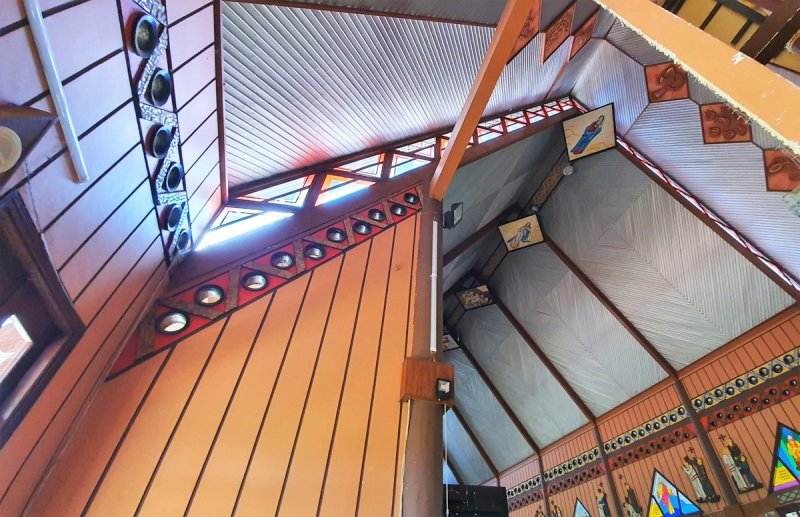 The ceiling of the church is covered with corrugated iron with a 45 degree slant to limit heat transfer, the gray-white corrugated iron tone contrasts with the wood color, adding to the aesthetic appeal of the building. The church is designed with 2 floors, the ground floor and the ceremony area. Outside the corridor there are reliefs depicting the biblical story in a very indigenous way. 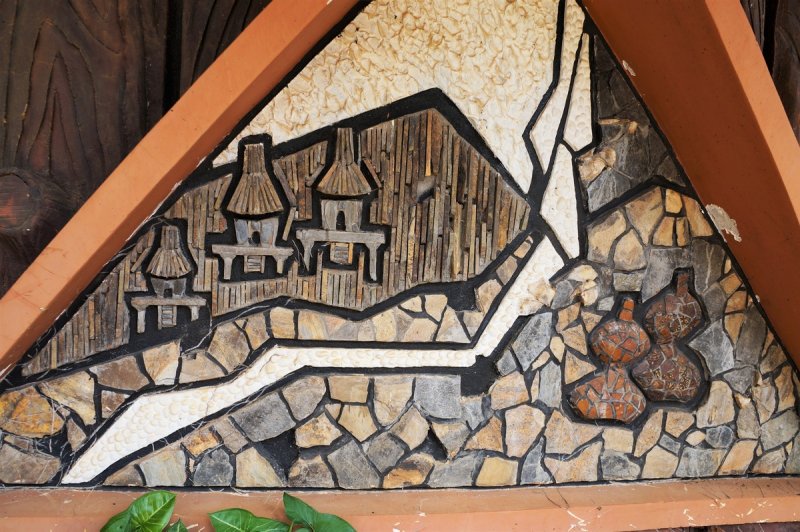 The walls at the church are tiled, pieces of jars and jars are decorated with motifs of communal houses, red dirt roads, images of daily life items of indigenous people are very meticulous.