Home / Travel / Best Picks
Top 10 most popular tourist attractions in Myanmar
duonghanhnguyen 4-06-2021, 16:46
Myanmar is one of the most beautiful scenes in the world. When you come to travel in this country you will never imagine this country has mysterious relics and new landscapes like this painting. When you arrive here you get to enjoy delicious food, interesting tourist attractions, there is nothing more than right. You'll be surprised by the world's heaviest brass bells, pagodas, temples made of clay with exotic and unique architecture and along with the beautiful natural waterfalls, Ngapali Beach is rated by blue waters and soft white sand along with many other tourist attractions. Let's go through some of Myanmar's most popular tourist attractions through the following article. 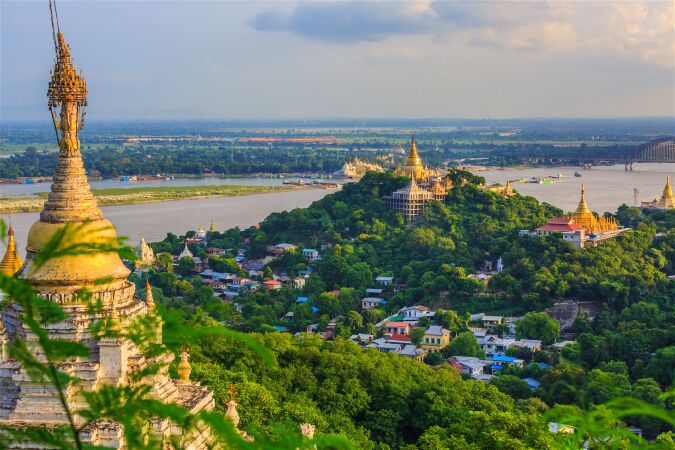 It is on the banks of the Ayeyarwady River, 20 km southwest of Mandalay. Sagaing owns many monasteries and temples so it is appropriate that the pilgrimage sites of Myanmar travel. Among the works in Sagaing, Kaung Hmu Daw is completely distinct from the tower-shaped arch. 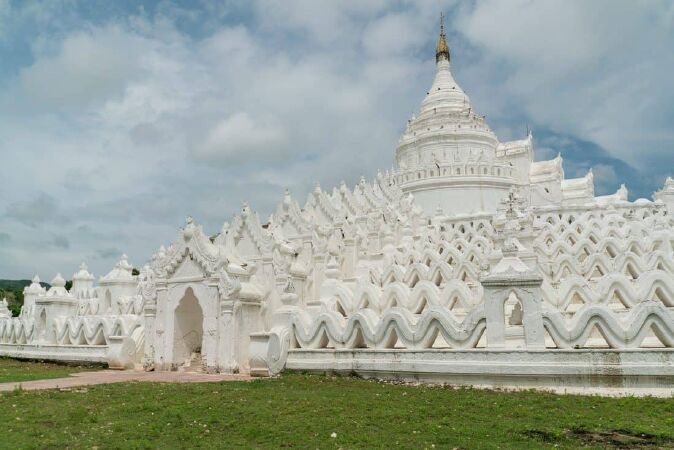 The village is located north of Mandalay. Mingun is famous for Myanmar tourists thanks to the following relics and monuments: the Mingun Bell – one of the heaviest and largest bells in the world, the Mingun Pahtodawgyi Stupa and the white Temple of Hsinbyume/Myatheindan with Chinthe statues. 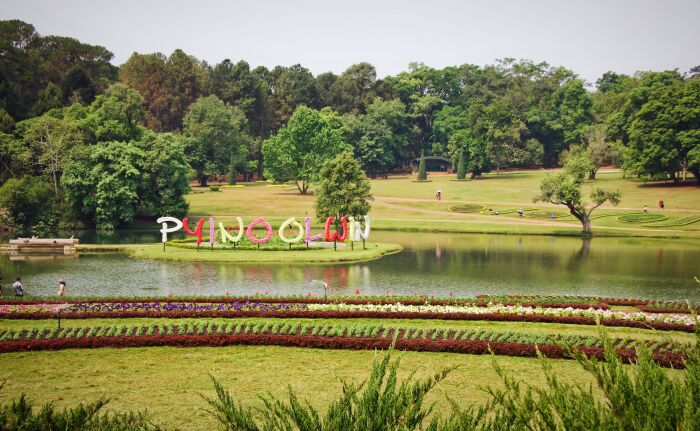 To the east of Mandalay is the town of Pyin Oo Lwin located on the hill above 1000 meters above the sea surface which is quite different destination of Myanmar tourism. Some notable attractions are Kandawgyi National Park, the Purcell clock Tower in London's Big Ben, Anisakan Falls, Pwe Kauk Falls and Pyeik Chin Miang Caves. 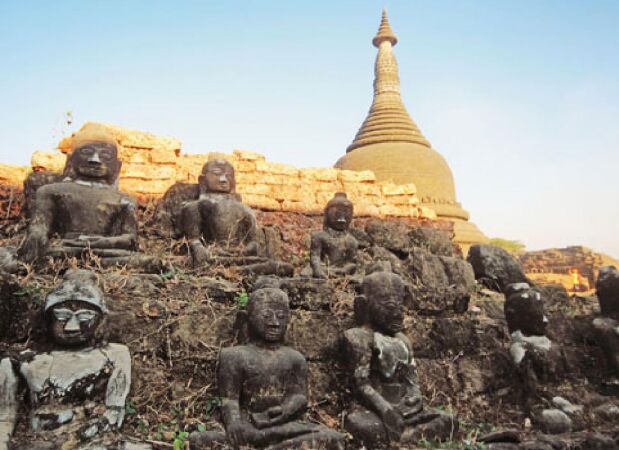 The important archaeological city is located near the western border of Myanmar. The Marauk-U is the second largest temple hub in Myanmar, after Bagan. The temple is built with stone tiles, unlike the mud and clay-lined temples of Bagan. The typical temples are Shite-Thaung, Htukkanthein, Koe-Thaung, Andaw-Thein, Lemyethna, Ratana and the cluster of five. The most magnificent and most archaeological significance is the Shite-Thaung pagoda. 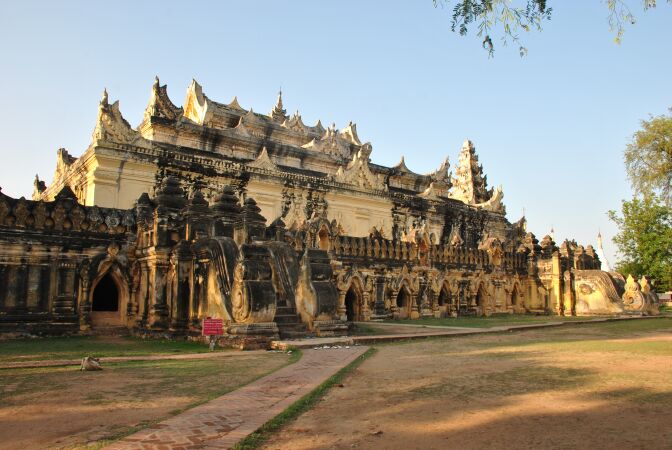 Located in southern Mandalay, was the former capital of the Burmese dynasties from the 14th to 19th centuries. Popular points of interest are the abbey of Bagaya Kyaung Wooden and the Leaning tower Nanmyin. 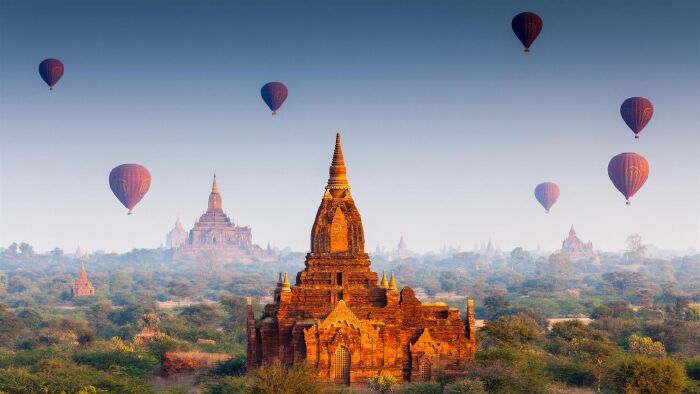 The most famous temple center of Myanmar Tourism, once the capital of the mighty Bagan kingdom. With more than 2,000 temples remaining today in total 10,000 of ancient religious architecture, Bagan is a destination not to be missed for visitors. Bagan's most iconic temples are the Shwezigon Golden Temple, Ananda Temple with 4 golden Buddha statues in 4 directions, Thatbyinnyu Temple – the tallest temple in Bagan, Shwegugyi Temple and Shwesandaw Pagoda – the place to store Buddha's hair. 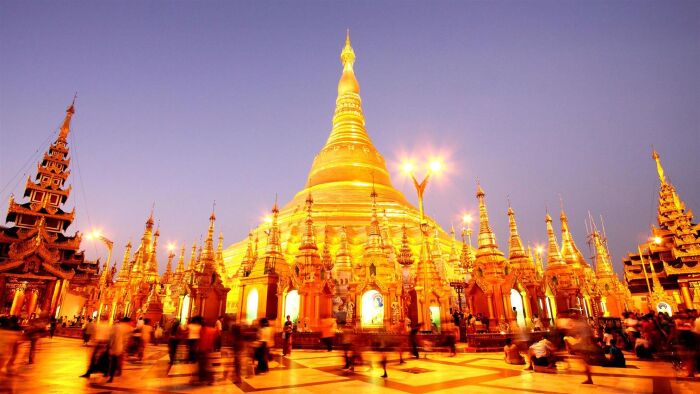 Beaches in the Bay of Bengal

Popular tourist spot in Myanmar-beaches in the Bay of Bengal. (Photo: Internet)

Myanmar tourism is only newly developed but the pristine beaches in this country have begun to attract the attention of the tourists who love the sea. The most popular beaches are Ngapali, Ngwe Saung, Chaungtha and Kanthaya. Ngapali Beach is highly rated by the blue waters and smooth white sand. 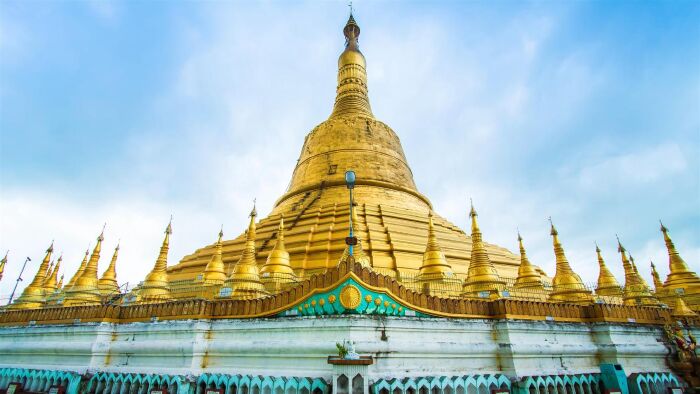 Once the capital of the Taungoo dynasty, Bago also holds many relics, including: The Buddha statue, Shwethalyaung Buddha, the Supreme Temple of Myanmar, is the tallest pagoda in Burma, Kyaik Pun temple sits 4 sides, Kanbawzathadi Palace of the Taungoo dynasty, and a variety of temples such as Maha Kalyani, Mahazedi, Shwegugale and Snake Pagoda. In particular, from Bago you can visit the famed location of Myanmar tourism: Kyaikhtiyo/Kyaiktiyo Pagoda or the immense Golden Rock Temple of the Kyaiktiyo Hill. 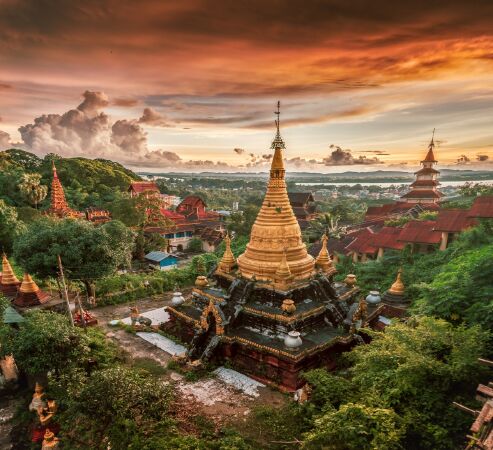 Myanmar's fourth-largest city. The most notable attractions that Mawlamyine contributes to Myanmar tourism is the Nwa Le Bo/Nwa La Bo Pagoda, which sits on three warping plates. The temple is often compared to the Kyaikhtiyo Mountain Pagoda, though attracting fewer visitors.