Referring to Phu Tho cuisine, of course, Thanh Son moss is always a unique and strange dish that attracts many tourists by the name and unique flavor that this dish brings.

Like many other rural areas, in the land of Thanh Son – Phu Tho, there is a dish that, when mentioning the name, makes people curious and strange that is the dish “rock moss”. And to know how this rock moss is harvested? How to prepare and cook food? We invite you to read with Vietnam Travel to discover Phu Tho to enjoy this special dish! 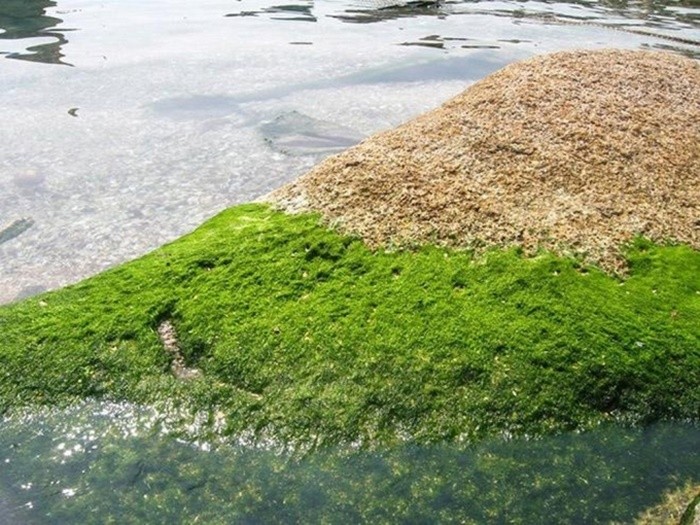 As one of the unique specialties of the countryside of Dat To, Thanh Son Phu Tho moss has attracted the curiosity and curiosity of visitors when arriving here. Moss often grows and clings to cliffs where streams flow. Especially in the spring, the moss layer is covered with green on the rock surface through the stream.

Cui: Means moss that grows in very long hair-like strands and has a dark green color.

Spicy: Means moss with fibers that grow quite loosely, sparsely and have a green color

Tau: That means moss will grow in clusters, in patches in ponds, rivers, streams and not adhere as firmly as other mosses. When picking moss, the Muong will often use bamboo sticks to put them in the basket.

Perhaps that is why Thanh Son moss is considered a precious specialty that nature has bestowed on the Muong. Most in the communes of Thu Cuc, Dong Son, Thuong Cuu…also consider rock moss as a clean vegetable of the highlands.

Not as much as other dishes and the preservation process of rock moss is not long. Therefore, this dish is only enough for the daily meals of the Muong. Lowland people coming here must be very precious to their compatriots to receive this special dish.

Rock moss is also harvested according to the season. Harvest time is from September, October of the lunar calendar and May. Moss usually grows on the rocks in streams. When it reaches a certain length, it will fall off on its own and wash away along the stream. However, every year, rock moss grows in the right season like the law of nature.

Especially on sunny, mild days, Muong women in Thanh Son will invite each other to wade through streams to pick up moss. After that, the finished products will be used to prepare simple and rustic dishes every day. The way to preserve moss is also quite special: If they want to eat moss on other occasions such as weddings, house construction, holidays… they will dry the moss and eat it gradually.

According to the experience of the Muong, the time to harvest  green Thanh Son rock moss is in the spring. And if you want to get clean and green moss, go to streams with strong flowing water and big rocks. Because moss grows there a lot. 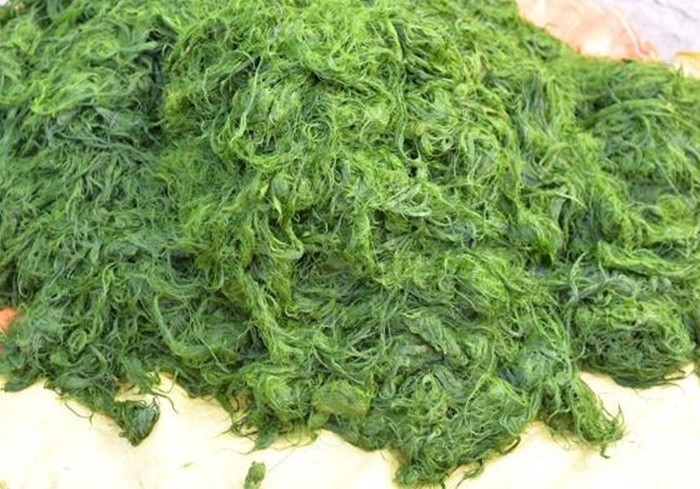 How to get rock moss

The reason why people here often call it catching moss, they consider it a food stream like crab or stream fish. Moss is caught in long strings. Depending on how deep or shallow the stream is, the color of the moss is green or green.

And the Muong people also pay great attention to how to get rock moss to choose in the direction of water flow so that the moss is not broken or crushed. Should pick moss when it is still green and young to eat well is in the body of moss. So the moss will be cleaner and better quality than the original part. After that, they will have to clean it and then use a wooden stick to beat it hard so that the sand clinging to the moss is washed away. 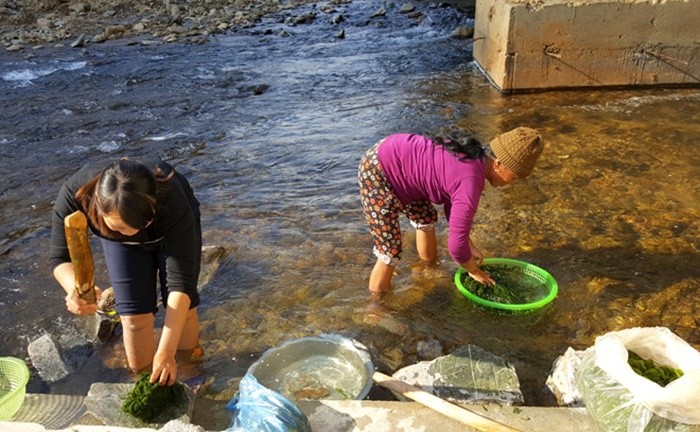 The work of threshing moss must have patience and hard work. Because of beating and washing the moss many times until the moss is entwined like a cloth. Moss is put in a basket, washed through spring water to remove sand or dirt, placed on a large, flat rock and then used a big wooden stick to beat.

Preliminary processing of moss also requires perseverance and persistence because it has to be shaken and smashed several times to clean. A whole bunch of rock moss is now only enough for one meal. Dark green stone moss color, soft to the touch, cool hand. 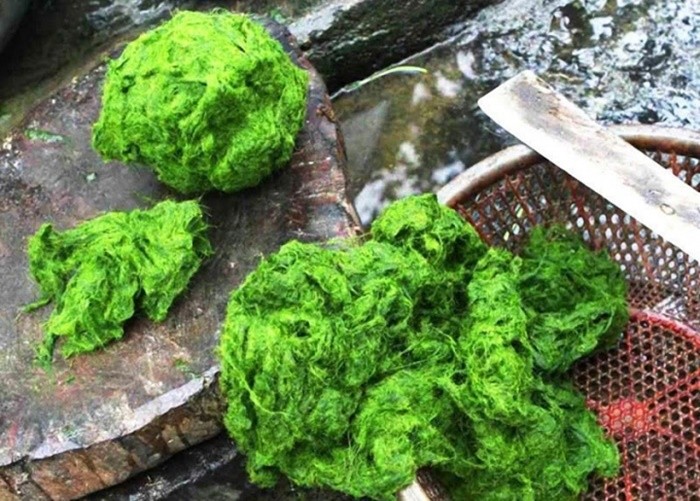 Delicious dishes made from rock moss

When it comes to Thanh Son rock moss , there are many different ways to prepare it such as: cooking soup, boiling, stir-frying, mannequin, grilling… However, in the daily meal of Muong people, stone moss soup, moss salad and moss dish Grilled is the 3 most popular and processed dishes. 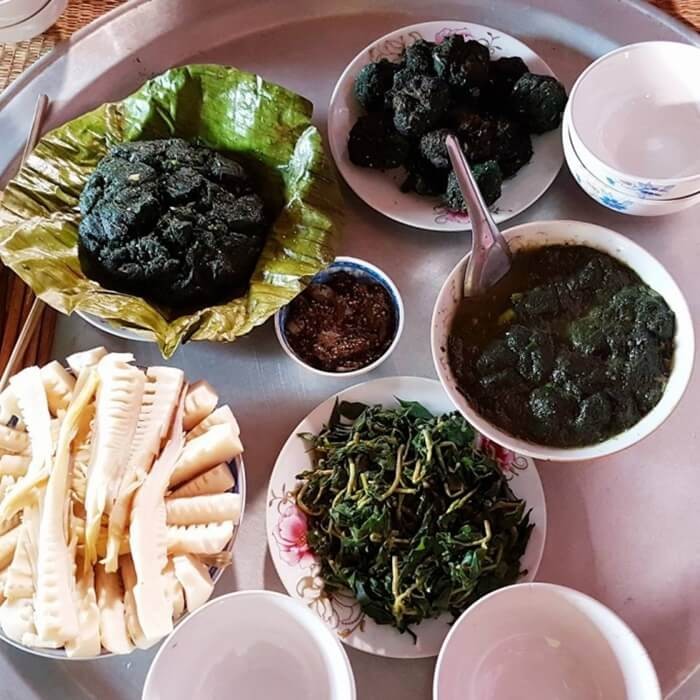 For rock moss soup, the Muong will cut the moss into small pieces. The broth for cooking moss is usually prepared from chicken broth, or bone broth. Then add the moss and cook until it’s cooked. This is a popular soup that appears in the daily meals of the compatriots because it is economical and delicious to eat. 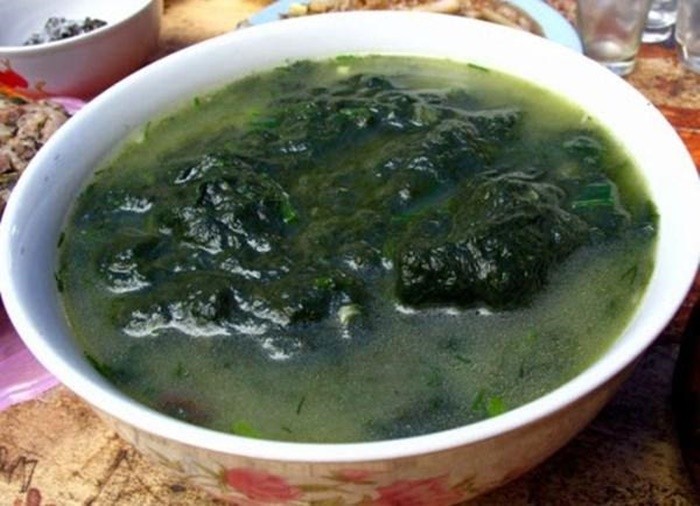 When it comes to rock moss mannequin, we must use very young batches of moss. Next, people will make moss like sticky rice so that the moss is soft. Then, mix with spices: main noodles, soup, ginger, mac Khen … who likes to eat spicy mannequin, add crushed chili to make a delicious moss salad.

And one of my favorite rock moss dishes is grilled rock moss. To make grilled stone moss, the Muong people will wash the moss thoroughly. Then marinate garlic and chili seasoning, mix more flax seeds, wild pepper, doi seeds together with lemon leaves, lemongrass, chili, ginger… Then add some fatty meat. Then it will be rolled up in a layer of banana leaves, dong leaves or young bamboo tubes to be grilled on fiery red coals.

When the banana or dong leaves turn black, the moss inside is ripe and they will take and peel off each layer of leaves. The smell of garlic and ginger mixed with the strong aroma of rock moss has added to the unique flavor of this dish. When you taste it, you will feel like eating like seaweed because it has a greasy, soft texture that does not stop eating. 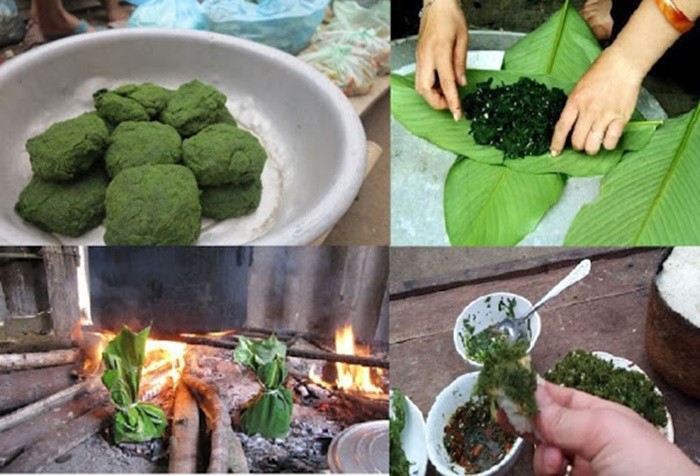 And if you have the opportunity to return to Thanh Son – Phu Tho, besides admiring the beautiful scenery of this midland region, you should remember to enjoy this Thanh Son rock moss . There will be many filled, strange and delicious emotions when tasting the special flavor of this dish.